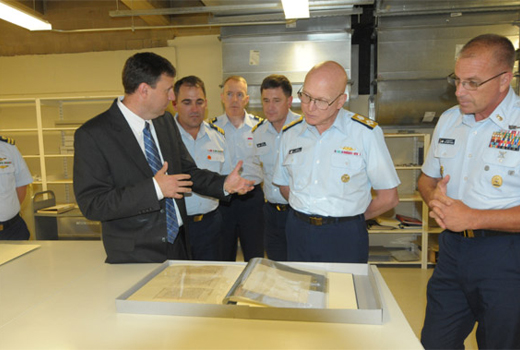 A Walk through History: An Insider’s View of the U.S. Coast Guard

by Rosemarie Calvert November 1, 2012 Comments Off on A Walk through History: An Insider’s View of the U.S. Coast Guard  Departments, Worth Knowing

On August 4, 2012, the United States Coast Guard (USCG) celebrated its 222nd anniversary. The event was vividly portrayed to Admiral Robert Papp, Commandant of the U.S. Coast Guard, because his staff had taken him to the National Archives, which has two centuries of Coast Guard history in a vault with the Navy and Marine Corps. An avid historian, Papp recalls the archivists “bringing out representative articles they thought I’d be interested in. The first was a large package, which they opened with their white gloves, with stacks of parchment sheets with hand-written calligraphy. Across the top was written ‘Tariff Act of 1790.’ They flipped to the last page, and it was signed into law by President George Washington on August, 4, 1790. The archivists flipped to another page in the middle with written remarks by then Secretary of the Treasury Alexander Hamilton authorizing construction of 10 cutters not to exceed $10,000 for the enforcement of the tariff laws, which was the culmination of his dream.”

According to Papp, in Federalist Paper No. 11, Hamilton talks about the need for a navy, but he comes to the conclusion that young America won’t be able to afford one because of its debt from the Revolutionary War. Indeed, he doesn’t think the United States will even be able to tax its new citizens since they just fought a war against taxation. However, Papp explains that in Federal Paper No. 12, in 1787, “Hamilton writes how the country might support its government and pay off its war debt by charging tariffs on manufactured goods from countries wishing to trade with the U.S. and to obtain its raw materials, primarily France and England. Ultimately, it was a great idea and within two years Hamilton, as Secretary of the Treasury, paid off the war debt, and the country actually had a surplus in federal revenue.

“Again, in Federalist Paper No. 12, since Hamilton envisioned the country’s future prosperity depending on maritime trade, he writes, ‘A few armed vessels judiciously stationed at the entrances of our ports might at small expense be made useful sentinels of the laws.’ That was the start of the United States Coast Guard, known as the ‘Revenue Cutter Service’ until 1915. The Coast Guard is still the only federal agency with the broad authority and capability to enforce all applicable U.S. laws in the maritime domain. That’s the start of the difference between the Coast Guard and the Navy.”

The rest of the difference is what Papp calls a “series of friendly mergers and acquisitions” that occurred throughout those 222 years. Predating the Revenue Cutter Service by one year was the Lighthouse Act of 1789. Papp says Hamilton believed the country would depend on maritime commerce and, therefore, he knew it would be vital not only to secure the ports but also to provide safe passage to them. Until then, each colony built lighthouses and positioned aids to navigation on its own. This effort evolved into the U.S. Lighthouse Service – an organization responsible for all federal aids to navigation and for providing safe approach to shore. 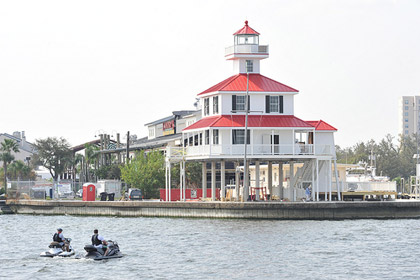 U.S. Coast Guard photo by Petty Officer 3rd Class Carlos Vega | The New Canal Lighthouse, in New Orleans, had a re-lighting ceremony, Sept. 26, 2012. The Canal Lighthouse has been rebuilt and will function as a museum and education center, which will include the Coast Guard’s history with the lighthouse.

“Sailing ships had a tendency to blow onto shore or to need emergency assistance,” explains Papp, “so the colonies also created various societies for rescue from shore. In the mid-1800s these services were brought together in the Treasury Department under a civilian organization, the U.S Lifesaving Service, which had a close relationship with the Revenue Cutter Service. In fact, Revenue Cutter officers were inspectors for the U.S. Lifesaving Service. In 1914, a government-wide efficiency study, the ‘Cleveland Study,’ recommended disbanding both the Revenue Cutter Service and the U.S. Lifesaving Service and giving their responsibilities to the Navy. Consequently, the Commandant of the Revenue Cutter Service and the Commissioner of the Lifesaving Service worked together to save their services by participating in writing legislation adopted by Congress, which merged the two services in 1915 under the new name, ‘United States Coast Guard.’ That’s how the USCG inherited its search and rescue responsibilities that most people know us for. But, in reality, our roots go back to enforcing maritime laws.”

Fast forward a few more years to the approach of WWII. As a result of the need for safe navigation, the U.S. Lighthouse Service became part of the U.S. Coast Guard, which gave it all aids to navigation responsibilities. During the war, the Bureau of Marine Inspection and Navigation was brought into the Coast Guard as well. That included ship inspection, certification, mariner licensing and marine safety. Throughout the years, laws and regulations were passed that codified all these changes, but the major components – law enforcement, marine safety, rescue at sea and aids to navigation – are the core functions of the Coast Guard, explains Papp.

“Wherever there are U.S. waters, the Coast Guard has those responsibilities. People traditionally think about this along our coasts, but the reality is that we’ve gone from a territorial sea of 12 miles out to an exclusive economic zone (EEZ) of 200 miles. And, the USCG has responsibilities on the high seas as well for various treaties and laws the United States has signed. The only agency within the federal government with the authorities to do that is the United States Coast Guard. We are also the only ones who have the capabilities – ships, aircraft and people,” says the USCG Commandant.

Besides law enforcement, marine safety, search and rescue and aids to navigation, the Coast Guard also has defense responsibilities. Again, young America couldn’t afford a navy, but Hamilton’s new Revenue Cutter Service was uniquely positioned to enforce the laws. Almost immediately, the United States was drawn into conflict because Britain and France were at war.

“We were trying to maintain neutrality and trade with both,” comments Papp. “French vessels harassed our shipping even more than British, and, as a result, the Revenue Cutter Service battled with the French privateers, capturing 18. 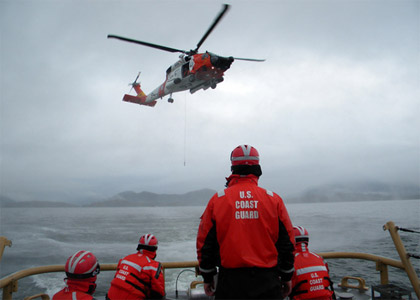 Around 1794 Congress finally decided the nation needed to build a navy. They had some revenue now, so they passed the Naval Act of 1794 (The Act to Provide a Naval Armament) to build the first six frigates. It took awhile to build those ships, and they only had the first three built in 1798-1801 when the United States entered the Quasi-War with France. The frigates deployed and started holding their own, but the president also directed the Revenue Cutter Service to supplement the Navy. That started the Coast Guard’s relationship with the United States Navy.”

Young America did not want its armed forces used against its citizens, which is why it was written into the Posse Comitatus Act that the Army and Navy could not enforce domestic law. (The Air Force did not become a separate military service until 1947, and the Marine Corps is part of the Department of the Navy.) However, the Coast Guard from the beginning was created to enforce domestic law. “We’ve carried that with us, which is the reason why we’re different from the other military services. But, in order for us to accomplish this mission in the maritime environment, we need small, naval-type ships. Our country doesn’t want to create two navies, which is why it has ships that can complement one another. The Navy’s not building many smaller ships nor does the Coast Guard build aircraft carriers or submarines. The Navy has its capabilities, and we have ours, and they have a long history of complementing each other very successfully,” concludes Papp.