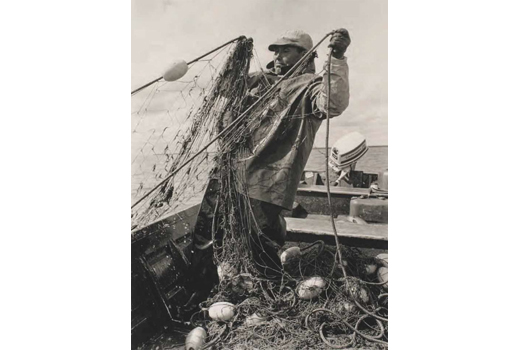 Always Getting Ready: The Yup’ik Eskimos of Southwest Alaska

by James H. Barker and Robin Barker August 13, 2008 Comments Off on Always Getting Ready: The Yup’ik Eskimos of Southwest Alaska  Features

I set out to document the experience of life in a subsistence culture. Through my work I wanted to see how living close to the environment would shape people in their relationships with each other and with the land. I have always tried to make sure that my photographs would be used in a way that would support the Yup’iks concern for the environment and their culture. I realize that I have responded most to people at their best, looking for moments when the people I visited and traveled with were most at peace with themselves and with each other, when they were most thoughtful, intelligent and vital. Thus I hope that this work presents those aspects of the life and people of the delta as they search for their own future. 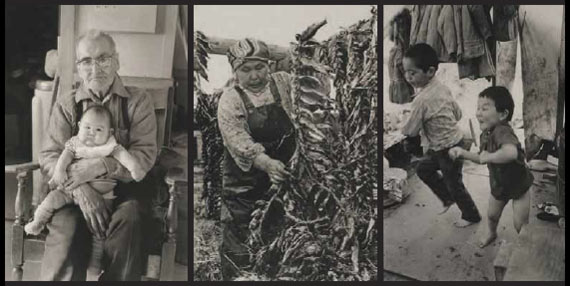 A Point of Departure

Alaska’s two largest rivers emerge from the interior and come within 25 miles of each other before bending apart for the final 200 meandering miles to the Bering Sea. The Kuskokwim and Yukon river waters carry immense quantities of silt eroded from the interior. Over eons this silt has filled in to form an expansive, flat delta. The delta now is a region of subarctic tundra covered with a mixture of moss and grasses that float on a permanently frozen layer of silt or “permafrost.” Stunted willows, cotton woods and spruce line the rivers in some inland areas, but for the most part the delta is treeless. From the air the region looks like a tenuous compromise that the land has made with the sea. In summer when the land is soft and spongy, the only possible surface travel is by boat.

Nick O. Nick, from the village of Nunapitchuk, described the delta: “Our land is not the same as the land in the lower 48. I’ve seen the outside, it’s nice and sturdy land. However, here in the Kuskokwim area, here in the lower area, not the upper area, it’s different, it’s bad. But it’s good with its fish, our subsistence.”

The delta is about the size of Kansas. Most maps of the region will show few signs of habitation in this fan shaped area. However, the delta supports a firmly estab lished population of Eskimo people. They are now the largest group of Alaska Natives to live on their traditional lands, over twenty thousand people in fifty villages. They are Yup’iks, a Bering Sea Eskimo group who speak a different language from that spoken by the northern Inuit.

The climate of the delta is moderated by the Bering Sea. Except in parts of the delta that are closer to the state’s interior, the winter temperatures usually do not register below minus 30° F, but these temperatures, combined with constant winds, frequently generate chill factors near 100 below. Summer temperatures are also moderated by the sea with readings averaging in the 50s and lower 60s. The wind and weather can change quickly. One never leaves home without a coat even in the summer, and safe travel in the winter requires much emergency gear and survival skills.

In the 1950s the Bureau of Indian Affairs began flying students out of the region to attend high schools in the lower 48 states and in Sitka. I have been told that some times near the end of summer a plane would land at a village, and a man would climb out with a clipboard and start reading off names. Students would scurry around, given just minutes to pack their things before boarding. They would be gone for nine months. 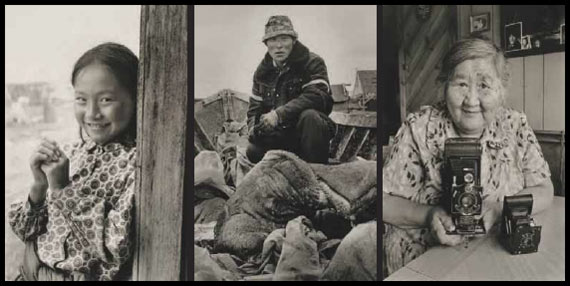 From the early 1970s until the mid 1980s the Bureau of Indian Affairs gradually relinquished control of village schools to the state system, which had run the “white” schools in larger communities since state hood in 1959. Although the transition of teenagers back into the villages after so many years has not been easy, there is now a new interest among young people in traditional dance and other activities, which has given new hope to the area in its effort to maintain its traditional identity. Parents are still struggling to gain the influence they need over their children’s education. They try to determine how the schools should best prepare their children for the ever changing future and also incor porate the knowledge of the elders into the curriculum.

The gathering of subsistence food, how ever, remains an essential, underlying them of the current culture. Though outboards, snowmachines and CB radios are used, it is only because food can more easily and safely be procured with these means. Yup’iks, faced by the demands of a difficult climate where hunger is never far away, have always been pragmatic and technologi cally adaptable.

A large portion of the Yup’ik diet is meat, fish and fowl, food that can be harvested locally. Many items in the American diet, such as milk products, fruits, vegetables and grains are expensive and difficult to obtain. Surveys completed in the mid 1980s by the Alaska Department of Fish and Game in nine villages in the delta, show that villagers were harvesting an average of 700 pounds of wild food per person per year. At the same time the mean consumption of store bought meat, poultry and fish by Americans was 222 pounds a year. Of the 700 pounds, 518 were fish, 75 were land mammals, 66 were sea mammals and 41 were other har vests such as greens, waterfowl and berries. Before the acquisition of snowmachines in the 1960s, families had to harvest an additional few thousand pounds of fish to feed their dog teams.

These figures represent a tremendous ongong effort. This sense of constant preparation may come from the fact that subsistence activities depend on being ready at the exact moment that the conditions are right and from the fact that the right moment is unpredictable. Technology for subsistence has changed in recent decades. What has not changed is the spiritual con nection between man and the animal world which is born out of intimate knowledge and dependence.

A generation or two ago Yup’iks had all the skills needed to provide food, shelter and clothing for survival on the tundra. Many of those skills are disappearing now. They are being replaced by newly needed ones: the ability to make enough money to buy heating oil and such things as outboard motors, snowmachines and guns for more safe and efficient access to subsistence re sources. The Yup’iks are also learning the skills necessary to negotiate regulations and advocate for conservation and management of the resources.

However, traditional beliefs dictate that Yup’iks be deeply cautious about any manmade changes that might have an effect on the productivity of the land and waters. It is enough that capricious natural events affect their food supplies. In testimony offered to the Bureau of Land Management in 1975, Peter Seton of Hooper Bay suggests how vulnerable his people feel: “It has been our concern for many years that it is not good to destroy our food potential. When any kind of waste spills or drains into our rivers, the fish will be destroyed thus destroying our main food supply. Even when there is a natural disturbance on the land there always seems to be a great reduc tion in the fish and wildlife around the area of that disturbance.” 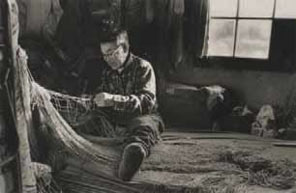 The Alaska Native Land Claims Settlement Act, passed by Congress in 1971, attempted to resolve disputes between Alaska Natives, the state of Alaska and the oil companies over land ownership. Under the Act, Alaska Natives relinquished claims based on abor iginal rights and received title to 44 million acres of land and $962.5 million. Native people became shareholders in thirteen regional corporations created by the Act and in newly organized village corporations. Calista is the corporation most Yukon Kuskokwim natives hold shares in. Calista and the village corporations each received portions of the funds and title to specific lands. In addition a nonprofit arm of Calista was established in Bethel to address health needs of the region. The corpora tions were run like any others, with elected boards, paid management and, by 1991, the possibility of selling shares to anyone want ing to buy. The Yup’iks have struggled to learn the skills needed to serve on boards, manage their corporation businesses and deal with government requirements. Per haps most importantly, the Act has defined them as owners and stewards of the land, roles which run directly counter to their conception of who they are as humans in relation to the natural world.

In the last decade there have been growing concerns about the long term impact of the Settlement Act. Questions about buy outs, potential loss of the land to creditors and about what will happen as Yup’iks are divided by their year of birth into shareholders and non shareholders have come to light. One response, known as the sovereignty movement, has been an attempt by several villages to seek self determination under a 1936 federal law, the Indian Reorganization Act. Under this plan, these villages hope to retain future control of their lands in spite of the Settlement Act. In addition they strive for Native control over such services as schools, child protec tion and law enforcement. This conflict over what form governance should take typifies the complex issues currently faced by the region.

Although Yup’iks today retain much of their ancestors’ value system, they must contend with an unprecedented onslaught of change: mechanization, a cash economy, the Native corporation, land ownership, the pressure of outside interests on natural resources. They live in a culture in rapid evolution, with the excitement of new things affecting their lives every year. Just since I arrived in the Yukon Kuskokwim Delta in 1973, many significant changes have occurred.

Television was introduced and now most villages receive many channels via satellite. Telephones were introduced, first as a single village phone and later in most homes. Health clinics with local paraprofessionals were established in each village. High schools were built in every village and government funded housing was constructed in most. These projects brought an influx of outsiders, some of whom settled in the region, and this in turn brought small busi nesses, particularly to Bethel. A regional community college was founded.

These changes come at a cost that is hard to measure. Problems including suicide, domestic violence and alcoholism are discouragingly prevalent. Non Yup’iks and Yup’iks alike indentify the connection between rapid cultural change and the serious social problems of the area and are often critical of the disruptions in lifestyle that have taken place. Many regret the passing of old ways while others point out that all cultures are dynamic. They argue that maintaining the trappings of the past and having a firm spiritual connection with it are not necessarily the same. It may not be the change itself so much as the speed of transition that causes such disorientation. The challenge faced by the people of the delta cannot be to resist all change but rather to resist changes that run counter to their spirit and to meet the future with confidence in who they are as a people.

“In many ways, Yup’iks seem to be coming to terms with these vast changes. The business of taking stock, seeing where we have been and where we might go from here, keeps us busy. Always, Yup’iks treasure the ability to find and express the humor in life. I think this comes out in the photographs as well as Jim Barker’s observations of us. It is a fascinating and provocative time to be a Yup’ik in the Yukon-Kuskokwim Delta.” – Mary C. Pete, Bethel, Alaska 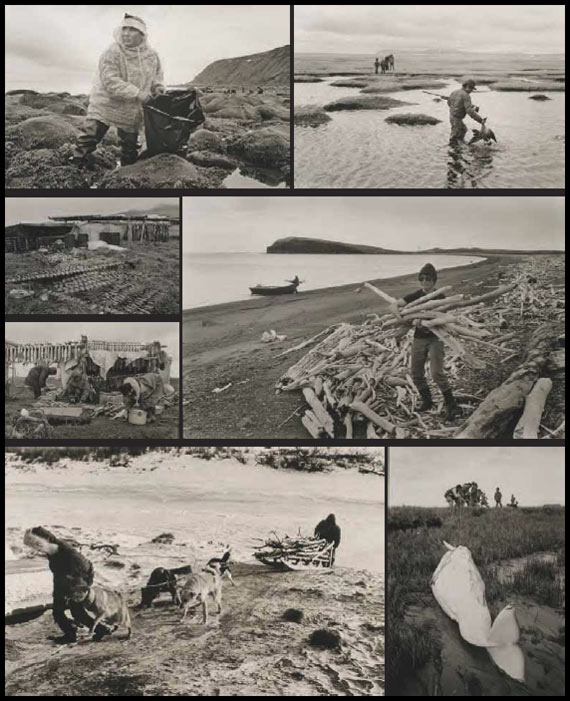