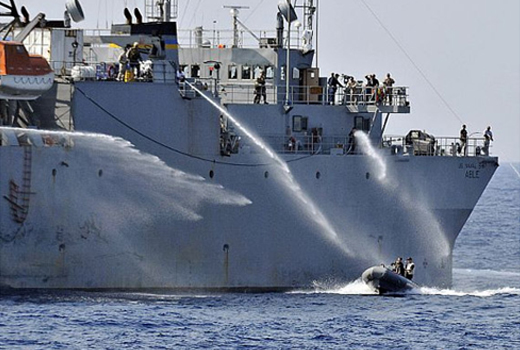 According to the National Space Centre Ltd., satellites monitor the whole planet, but owners and operators don’t currently share information. That will change with a new cooperation initiative, C-SIGMA (Collaboration in Space for International Global Maritime Awareness), which has opened its headquarters at Elfordstown Earthsation, Cork, Ireland. C-SIGMA is an international initiative under which satellite owners and operators worldwide will share maritime-based information. The project aims to enhance maritime surveillance systems and to increase global effectiveness in areas like search and rescue, location and tracking of vessels, monitoring of beaches and ports, and detection of unlicensed fishing and illicit activity.

The C-SIGMA Centre will coordinate projects put forward by the C-SIGMA partners worldwide, and its location in Cork was approved at the C-SIGMA meeting in May 2012 at La Spezia, Italy. C-SIGMA partners include both public and private entities. And, participants in the inaugural C-SIGMA workshop, held at the European Space Agency headquarters in 2011 in Frascati, Italy, included the U.S., Irish, Italian, French and Japanese Coast Guards, Australian Customs, Italian, U.S. and Canadian Navies, EMSA, Frontex and NATO.

“. . . no one nation can successfully counter all of these problems. Thus, a global consortium is required.”
– George Guy Thomas

According to George Guy Thomas, former U.S. Navy, U.S. Air Force and recently retired U.S Coast Guard Science and Technology Advisor, “All maritime nations of the world have a stake in these topics, and many nations are working in just these concerns. But, no one nation can successfully counter all of these problems. Thus, a global consortium is required. The C-SIGMA Centre is dedicated to building that consortium with Elfordstown working to become its global information hub.”

Thomas, now president at C-SIGMA Consulting, has been involved in the creation of the C-SIGMA concept since its inception in 2004. He was the principal author of the maritime task within the Implementation Directive (ID) of Presidential Policy Directive 4, National Space Policy, June 28, 2010, (PPD-4) and both the Technical Exchange of Ais via Space (TEXAS) workshop series and the Collaboration in Space for International Global Maritime Awareness (C-SIGMA) international conferences.

Below is an outline by Thomas that explains the C-SIGMA Concept of Operations: