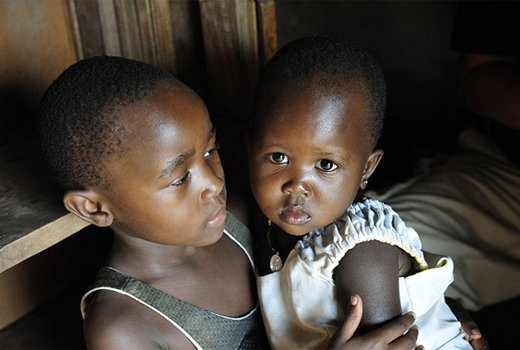 Uganda’s SUUBI Community Development Initiative (CDI) is a registered, non-governmental organization (NGO) begun in 2008 by a group of schoolteachers who were in despair by the number of orphans in their community and who have since strived to improve the quality of life for local children. SUUBI CDI operates in the Luwero District of the Butuntumula Sub-County, an area covering roughly 35 square miles with a population of 35,000 in which everyone is under the poverty line. Home to an estimated two million orphans, Uganda is 161 out of 187 nations ranked in the United Nations’ Development Program’s Human Development Index. The average life expectancy at birth in this landlocked East African country is 54 years.

SUUBI CDI works to provide orphans with the means to attend school, including vocational schools, and to begin entrepreneurial projects leading to sustainable incomes. The objectives are simple: Increase the number of orphans attending school and, in the same spirit, increase positive attitudes among children who have experienced loss. “Suubi” is the Luganda word for “hope.” “Hope is what this region needs,” says John Paul Kibalama, a native Ugandan and SUUBI CDI’s co-founder, secretary and spokesperson. He is also a history and geography teacher and father of three. Kibalama and his wife have taken orphans into their home and have worked tirelessly to ensure that all of their children, both blood and foster, have made it to school every day.

“In my family I have seven orphans who have nowhere to live, nobody to look after them,” says Kibalama. Four of these children have completed vocational school and all four have secured low-wage jobs. The two young women work in a salon; one of the boys is a tailor, and the other is a contractor. All of the children are members of SUUBI CDI and support the program any way they can. “I did not start this initiative alone. The other teachers and I were inspired and decided to form SUUBI CDI because we see so many orphans with no help and so many child-headed families. Due to inadequate hygiene, people tend to die,” explains Kibalama. Tend is not a word often coupled with death. To tend to fall victim to disease not abruptly but as a habit is a hauntingly cruel way of life in Butuntumula, home to many orphaned children – many veterans of death.

Kibalama, now 39, believes his devotion to the orphans is, in part, a byproduct of his own life struggles. “After the death of my beloved father, we were forced to discontinue schooling,” he says. The second of five children, his father died when he was 13. Two years later a local catechist took Kibalama to a priest who offered to pay for his school fees. 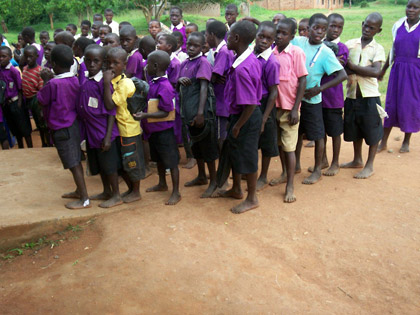 “Life was not easy after primary school as I had to walk eight miles to secondary school,” he remembers. Kibalama worked hard in school, received good grades and later attended Ggaba Teacher’s College in Kampala, Uganda, the nation’s capital. Ggaba is an environmental institute with a student body of roughly 2,000 that trains and certifies students to become primary school teachers.

“When I flash back to my past, I think of the people with good hearts. If there were no such people, I would have been on the street or leading a miserable life,” explains Kibalama.

It was not until 1996 that most, but not all, primary school fees were eliminated under Ugandan President Yoweri Museveni’s Universal Primary Education policy. This move to abolish illiteracy has drastically increased the number of children attending school. For example, just three years after Museveni’s policy took effect, more than one-third of Uganda’s population had enrolled in primary school – a total of one-half million children, including those with disabilities. The government commits to sending four children per family to school, and two must be female, if the family has female children. The policy also gives children with disabilities the highest priority.

Aside from jobs in salons or as tailors, it is also possible to gain employment in the farming industry. “Agriculture is the backbone of Uganda,” says Kibalama. As of 2005, 85 percent of the Nation’s population was engaged in farming, which is why some higher education and primary schools are geared toward agricultural studies. Uganda uses less fertilizer in its farming practices than any nation worldwide, which equates to 64 percent fewer greenhouse gases (GHG) per hectare compared to conventional farms, according to a study done by the United Nations Environment Programme.

According to Kibalama, “People need to be taught modernized farming, and they must be given verified seeds. That’s when Ugandans may benefit from agriculture.” In the meantime, raising livestock, such as cows, pigs and chickens, is one of the few ways Ugandan farmers are able to make a profit.

SUUBI CDI works to support the basic needs of as many orphans as possible and to encourage children to continue their education past primary school. Despite the 26 schools in the area, access to education is only achievable with school supplies, regular health care and a solid support system, such as parents and family. These are luxuries the orphans do not possess, which is why they often sell fish in the markets of their local villages to support their younger brothers and sisters. Widespread disease is the primary culprit in the devastation of many Ugandan families. When such tragedy strikes, according to Kibalama, “the elderly, including those suffering from blindness and other debilitation, have to care for children who have lost their parents.”

According to Kibalama, medical facilities are nowhere to be found in Butuntumula, thus forcing its citizens to travel long distances to be treated for disease. Diseases like cholera are persistent in the community due to severe lack of sanitary drinking water, which can only be achieved by deep bore-hole rehabilitation. Deep bore-hole rehabilitation is the target of many initiatives around the world, such as the International Committee of the Red Cross and The Water Project, which have raised money and worked with local NGOs to develop long-term plans to solve the clean-water crisis in Africa. 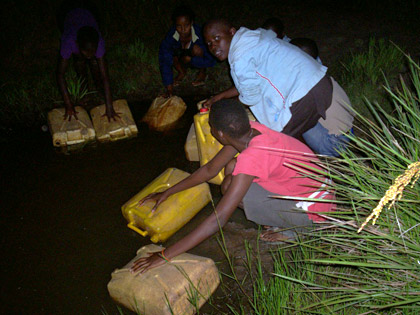 The community that Kibalama represents, however, has yet to receive aid from a water-rehabilitation agency, and his people continue to suffer. Citizens of the Butuntumula community walk miles to access sanitary drinking water. Many of the boreholes, especially in rural areas of Uganda, are non-functioning. Drilling these boreholes requires expensive equipment, such as drill rigs, technical expertise, funding and someone to monitor the projects after they have begun. Though bore-hole rehabilitation is one of the most effective ways to bring clean water to a community like Kibalama’s, they have had no success in finding this life-saving assistance.

Aside from chronic community disease resulting from unsanitary water conditions, Kibalama cites HIV/AIDS and malaria as two of the most pressing concerns for the citizens of Butuntumula. The tragedy, he explains, is that these diseases are preventable with education and proper treatment. “In Uganda, a child below five years of age dies from malaria every minute. The disease can only be prevented when one sleeps under a treated mosquito net,” explains Kibalama. SUUBI CDI lists mosquito nets, mattresses and clean bed sheets as part of its provisions since only by being healthy can a child attend school on a consistent basis.

In 2011, according to the World Health Organization, Uganda had an HIV prevalence rate 5.4 percent, which is higher than Sub-Saharan Africa as a whole by .2 percent and much higher than the rest of the world. According to Shanti Uganda Society, 57 percent of adults in Uganda are living with HIV, the majority of which are women. In many cases, women in Uganda are subject to social pressures, such as marrying early, and, therefore, become sexually active at a younger age. Due to lack of education and antenatal care, many women pass the infection to their children. Additionally, currently one in every 25 Ugandan women dies giving birth.

“AIDS is especially traumatic on families because it takes parents away from their children forever,” says Kibalama.

Rather than promoting safe sex, Museveni and his government advocate abstinence for birth control and ABC (abstain, be faithful and use condoms) as their AIDS control programme. Additionally, the HIV/AIDS pandemic was not officially addressed by the Ugandan government until 1986, four years after the disease was clinically recognized.

“Our message is put padlocks on your private parts until the time comes to open them when you have a husband. You are not there just to taste and taste. I can’t tell my daughter or granddaughter to do that. If you start with the right message from the beginning, they will take it,” said Museveni in March 2012 at the International Women’s Day celebration in Nebbi, West Nile.

The region is also subject to psychological disorders and trauma. As a community within a nation that has long been subject to civil strife, genocide, lasting dictatorships and spread of fatal diseases, the odds are against Butuntumula. Past tragedies have resulted in a high prevalence of depression and subsequent alcohol abuse and suicide. Kibalama believes much work is yet to be done regarding HIV/AIDS education and safe sex practices in his community. 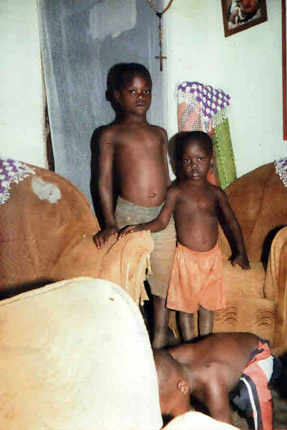 “In Uganda, some NGOs and the government try to educate people about abstinence and use of condoms, but, still, HIV/AIDS kills people, especially in the rural areas. In our area, people are not using contraceptives,” says Kibalama. Yet, for SUUBI CDI, the primary focus lays less on advocacy and policy change than it does on education and caring for orphans. “Our initiative requires basic needs like food, clothes, money for water (deep bore-hole) rehabilitation, education and medical help. So in that way, SUUBI needs money to buy those items, but for things like clothes, food, etc., people may donate when it’s not too expensive to ship to Uganda from the U.S.,” says Kibalama. The initiative also welcomes international volunteers. While the Ugandan government is aware of SUUBI CDI, it does not support the organization financially. SUUBI draws its funding from local membership and local leaders.

Despite an uphill battle with disease, unsafe sex practices and poverty that plague Uganda as a whole, Kibalama places his hope in God, his startlingly positive outlook and a firm belief in the power of education. Today, Kibalama works with 47 other trustees to combat the health, financial and educational deficits of Butuntumula through SUUBI CDI.

“Please remember us to everyone,” says Kibalama, speaking on behalf of his organization. “As Mother Theresa said, let us be the pencil in God’s hand.”

Kibalama and SUUBI CDI welcome your support. To donate money for mosquito nets or other items, please go to suubicommunity.com/donate or use the PayPal button below. For additional information or to plan a visit to volunteer your time, please contact Kibalama by email at buscug@gmail.com or by phone at +256 701 891718.