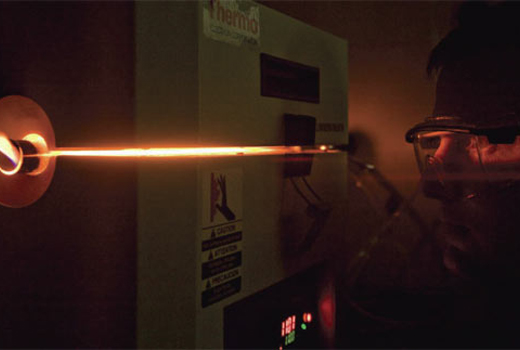 Most people in the field think we need new materials or better ways of putting those materials together to get more efficient electron transport,” said Ellen Fisher, chair of the Department of Chemistry at Colorado State University (CSU). Scientists in her department are working on everything from creating new materials that conduct solar electricity to developing innovative methods for energy storage. “How do you get those electrons out of the solar cell and back to something that’s going to run the light bulbs in your house?”

Solar energy is back on the front burner with more companies and major research institutions entering the market. However, solar-powered energy technology is still incubating, say industry and scientific experts in Colorado, which is one of the national leaders in creating “green” technologies and jobs. Costs are coming down, and efficiencies are going up thanks to new advances. But, prices are just now becoming attractive enough for the average consumer. Some scientists estimate that the next major strides will be five years away, which is a relatively short timeframe compared to the hundreds of years that the world has relied upon coal as its primary means of generating electricity.

The photovoltaic conversion of sunlight into electricity is the most direct, efficient way to use the sun’s energy. With the reemergence of worldwide interest in alternative energy sources and in the “green” workforce, there is an increasing maturity in solar-thermal applications and in progress toward efficient decomposition of water to produce hydrogen. This progression also extends to other strategies for solar-generated energy storage.

Solar, one of the CREC’s long-term alternatives, is becoming a popular Colorado option for a number of reasons. For starters, the state is graced with more than 300 days of sunshine per year. Additionally, Colorado Gov. Bill Ritter’s “Climate Action Plan” calls for a 20 percent reduction in greenhouse gases by 2020 and for deeper emissions cuts by 2050 – goals he expects to achieve with the creation of new renewable energy sources and jobs.

As an example of the confluence of university research meeting private industry initiatives, officials at Abound Solar, a CSU spinoff, claim they’re leading the industry in reducing renewable energy costs. The company’s economical manufacturing process at its Longmont, Colo. factory is driving down the cost of solar electricity for its commercial and utility customers. Solar panels will begin rolling off manufacturing lines at rates that could be comparable to those of traditional electricity. Lower costs will eventually trickle down to consumers. (For more information about Abound Solar, please read this issue’s “Sustainable Solutions” on page 63.) 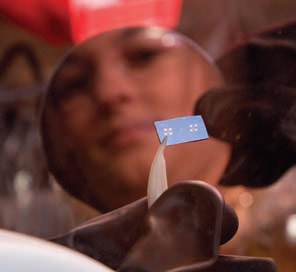 The Colorado Governor’s Energy Office has estimated that the state potentially could produce as much as 83 million megawatt-hours of electricity per year from solar technologies. Through the Office’s Pilot and Solar Rebate Programs, 499 solar energy systems were installed across Colorado since 2008; they generated 3.4 gigawatt-hours of annual solar energy. With the average Denver home’s annual electricity usage of 7000 kWh/yr, that’s enough energy to power 486 Denver homes with 100 percent solar energy.

Not surprisingly, as the amount of solar energy production has grown the state’s solar industry has also expanded despite challenges that include lack of conforming community regulations and still-expensive technology, said Colorado Solar Energy Industries Association Executive Director Beth Hart. The state’s solar industry has grown from 56 companies in 2004 to more than 200 in 2009; their employees have increased from about 200 people to 2,000, Hart said.

“We really hope to be at that place in the residential sector where it’ll be just like going out and getting a car and getting a loan. And, it won’t be as regulated as it is now,” Hart said.

The Next Big Thing

According to Fisher, CSU chemists, mechanical engineers and biologists are working on the next big thing in solar to help get it into the mainstream. She divides their research into three categories:

CSU Chemistry Professors Mike Elliott and Eugene Chen are researching how to create new polymers – long chains of organic or carbon-based fragments – that could conduct solar electricity. Fisher said to think of it this way: Imagine using a strong but flexible material like aluminum foil that you could roll out on your roof for capturing solar energy. She explained further: “Organic materials are not the best electron conductors; they tend to be insulators. If we could actually create a photovoltaic material that was flexible and inexpensive, that would completely revolutionize the solar industry. It would be much more commercially viable to sell to the general public.”

2. Creating new inorganic materials, silicon or cadmium telluride, for example, that could be placed inside solar panels to produce electrical current.

We’re trying to find an efficient material for solar cells that contains only earth-abundant, non-toxic elements,” said another CSU chemistry professor, Amy Prieto. “There is still much to be understood about how the material we’re now using works – how it absorbs photons and converts them to current.”

3. Increasing the surface area of materials that are actually exposed to sunlight.

CSU Chemistry Professor Alan Van Orden is developing semiconductor nanocrystals from inexpensive materials so that they will have the ability to absorb energy from sunlight and to transport the energy as electricity.

Fisher explained: “It’s comparable to using a bunch of little marbles instead of one big marble. If the function that you’re looking for all takes place on the surface, even though there are more of them, you wouldn’t have to make a bigger device to get more efficiency.”

In mechanical engineering at Colorado State, Professor Venkatesan “Mani” Manivannan is working with students to create an integrated solar power system that has a cheaper overhead cost and is more energy-efficient than current systems. The goal includes developing a high-density battery that could increase solar power storage capacity. 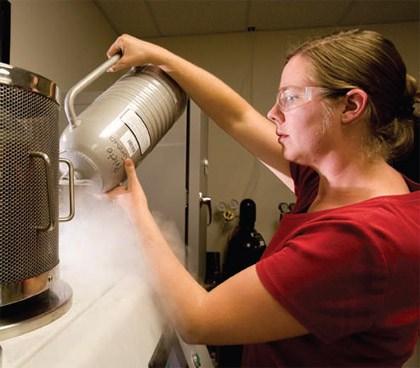 Fisher, whose work focuses on altering surface properties to make existing materials more efficient, is confident that basic research at CSU and at other universities around the nation will ultimately lead to low-cost solar options for consumers. She said, “Changes are going to come out of this fundamentally based research that promotes an understanding of how materials work to build a better solar cell.” She noted that research often involves interdisciplinary collaboration not only within the University but also with NREL and the CREC.

Cross-institutional lines have blurred even more in the past year: CSU is one of three Colorado research universities that now have a seat on NREL’s board of directors. In summer 2008 the U.S. Department of Energy announced the selection of the Alliance for Sustainable Energy LLC as the management and operating contractor for the Laboratory. The Alliance, which includes Midwest Research Institute and Battelle, subsequently named five research universities to its board of directors: CSU, Colorado School of Mines, University of Colorado at Boulder, Stanford University and Massachusetts Institute of Technology. At the time Colorado State administrators said they believed the Collaboratory’s success led the Alliance to choose the aforementioned institutions for its management team.

The Collaboratory has three goals: to commercialize renewable technologies, to help renewable energy become an economic driver and to educate engineers and scientists for academia and industry. “Universities are very happy to educate Ph.D.s who are finding jobs in the renewable energy industry,” said David Hiller, former energy advisor for then-U.S. Sen. Ken Salazar now U.S. Secretary of the Interior, who is executive director of the CREC.

Xcel Energy, Abengoa Solar, SunEdison, the City of Aurora, Colo., and the Midwest Research Institute are working together on the Collaboratory’s Solar Technology Acceleration Center (SolarTAC). The SolarTAC facility is a place where the solar industry can research, test, validate and demonstrate the full range of solar technologies and components. SolarTAC is now under construction near Denver International Airport and is 100 percent privately funded, Hiller said.

“CREC’s role is to provide talent for companies that want to conduct research related to technologies being tested at SolarTAC,” Hiller said. “I really believe this is going to be one of the world’s premier solar testing and demonstration centers and it will be a great magnet for the state. I think you’ll see the solar industry congregating around SolarTAC – building from testing and demonstration activities to research to manufacturing in Colorado. The state’s solar future is very bright.”

The same can be said for Earth’s solar future, thanks to researchers within the U.S. and around the world.