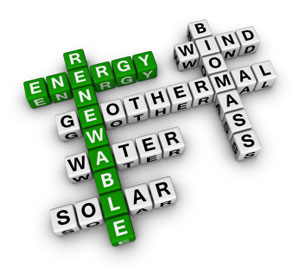 Tyndall Air Force Base, Fla. – Responsible for installation support functions at 166 bases worldwide, Civil Engineer Maj. Gen. Timothy A. Byers developed a plan for Airmen to build leaner installations, find cleaner sources of energy and make smarter decisions when planning and using energy. “Making energy a consideration in everything we do isn’t just a tagline,” said Byers. “Energy is the operations enabler allowing us to quickly and effectively deliver our warfighting capabilities to fly, fight and win.”

To make installations better platforms for accomplishing the mission, the Air Force has improved walls, windows, floors and roofs, installing more efficient lights and decentralizing heat plants at bases across the country. In addition, about 90 percent of bases have installed “smart meters” to measure energy usage, find efficiencies and create energy savings.

In pursuit of cleaner energy sources, solar, wind, gas and ground source heat pump renewable energy projects are in operation at 45 bases, with the number of projects expected to double by 2015. In total, the Air Force produces 5.8 percent of its annual energy by renewable sources.

“If all planned projects come to fruition by 2015, the Air Force will be producing an estimated 1.5 million megawatt hours annually, or roughly 15 percent of its annual energy usage,” commented Byers. “It’s a trend the Air Force hopes, and expects, to continue as (officials) push toward greater energy security, an issue they now see as an operational imperative that not only is good for the environment, but also saves lives and money.” 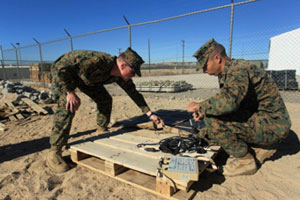 In theory, by using SPACES, troops deployed to remote areas like Afghanistan would be able to power everything from AN/PRC-119F SINCGARS radios and combat operation centers to humvees. Infantry Officer Course students from Marine Corps Base Quantico, Va. have been taking the $7,485 system on trial runs during their field training operations to see what works and what needs improvement. The “results varied” based on time of day, where the kit was set up and cloud cover. As hoped, the system worked better in the Combat Center because of its similarity to a desert environment.

The Marines said the system shows potential, but there are still a few things they’d like to change before relying on it as an alternative power source away from supply lines. Discovering its flaws was the reason they brought it to the Combat Center, and they left with high hopes for the system and its potential. 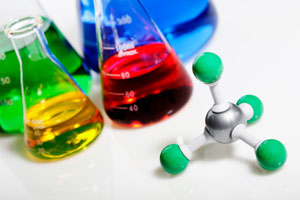 The partnership puts in place a process for working together on a range of issues of mutual interest, including toxicity testing, chemical hazard and risk assessment, risk management tools, scientific collaboration and information exchange. The two agencies will also share criteria for managing confidential business information with the goal to increase the availability of chemical information to the public, as well as sharing information on approaches to more efficiently address chemicals of concern that are prioritized for regulatory action.

As part of Administrator Lisa P. Jackson’s continued efforts to enhance chemical management and to increase transparency, the EPA has introduced a new web-based tool that allows users to conduct a chemical-specific search for health and safety studies submitted to the agency under the Toxic Substances Control Act (TSCA). The EPA is also taking aggressive action to reduce companies’ efforts to keep the identity of the chemical confidential when health and safety studies are submitted to the agency. 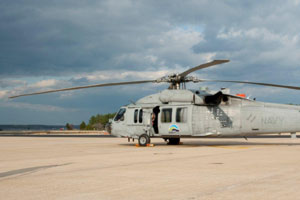 Naval Air Systems (NAS) Command, Patuxent River, Md. – Moving closer to achieving the objective of decreasing its need for petroleum-based fuels, the Navy flew an MH-60S Seahawk on a 50/50 biofuel blend on December 22, 2010. The helicopter, from the Air Test and Evaluation Squadron Two One at NAS Patuxent River, Md., tested a fuel mixture made from camelina seed, which is in the same family of plants as the mustard seed and rapeseed. Camelina needs little water or nitrogen to flourish and can be grown on marginal agricultural soil. (For more information on biofuels read this issue’s Energy Conversation: Family Farms and Biofuel Feedstock Supply.)

Earlier in 2010, the Navy tested this biofuel blend on the F/A-18 Super Hornet. Results from those tests indicated the aircraft performed as expected through its full flight envelope with no degradation of capability. Rick Kamin, the Navy Fuels lead, commented that the helicopter tests “further demonstrate this fuel made from an alternative, non-petroleum feed stock to be a viable option for use in Navy aircraft.” Testing will continue across additional aircraft models in 2011 with a target of approving the 50/50 biofuel blend for use in Navy ships and aircraft by early 2012. 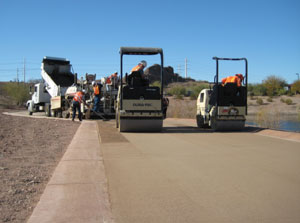 Soil Stabilization Products Company – A request from National Park Service engineering staff for a sustainable and natural looking alternative to hot mix asphalt pavement provided the inspiration for the development of an alternative pavement product now in use at many Park Service facilities and green building projects. Known as NaturalPAVE® XL Resin Pavement™, the product displays the natural coloration of constituent aggregate materials selected for pavement mixtures and provides a context sensitive solution for a wide variety of unique project requirements. These energy conserving paving materials are manufactured by a cold-mix process and are cold-applied by conventional asphalt paving machinery.

In addition to the sustainable aspects of this green pavement technology, project owners have specified NaturalPAVE products for solar reflective cool pavement requirements, historically appropriate aesthetics, reduction of visual impact by matching coloration with local soil and rock materials and for more natural appearances than available with asphalt and concrete pavement products. To find out more, visit www.sspco.com or call 800-523-9992. 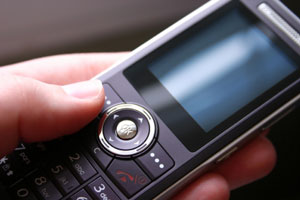 Environmental Working Group (EWG) – France will soon become the first nation to require merchants to inform consumers of the radiation levels of cell phones at point-of-sale. The law mandates stores and other cell phone vendors to post each device’s Specific Absorption Rate (or SAR) – the standard measure of radiofrequency energy absorbed by the human body – allowing shoppers to make on-the-spot comparisons. The French law also requires all cell phones to be sold with a headset, bans cell phone ads aimed at children and adolescents younger than 14, and bars the sale of phones specifically made for children under 6.

Health agencies around the world agree that more research is needed to clarify the potential health hazards associated with cell phone radiation exposure. However, because recent studies suggest a link between head and neck tumors and long-term cell phone use, the Swiss, German and British governments all recommend cell phone users to buy low-radiation phones. These and other governments advise other precautionary steps, such as wearing headsets and texting instead of talking.

The U.S. cell phone industry adamantly opposes posting SAR values. By contrast, the French telecommunications industry has begun publishing phones’ SAR values and even advises consumers to “choose a low-SAR phone model so as to reduce the overall exposure to radiofrequency radiation.” It also urges headsets and limited use of cell phones by children.

In the U.S., San Francisco became the first municipality to require disclosure of cell phone radiation levels at point-of-sale. Lawmakers in Berkeley and Burlingame, Calif., and in Philadelphia are exploring similar right-to-know ordinances.