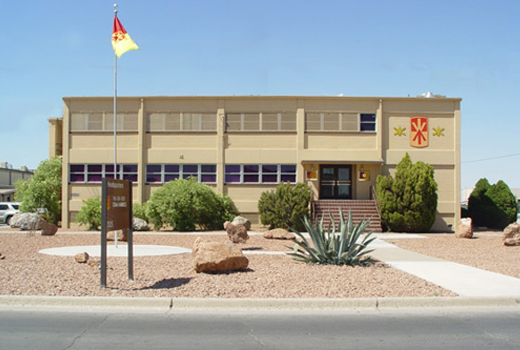 It’s zero hour for a massive military initiative that’s aimed at saving lives, saving resources and saving millions of taxpayer dollars. With the April 2011 announcement of the U.S. Army’s Net Zero Installation Strategy, military installations around the world are watching pilot projects, such as Fort Bliss, that are revolutionizing the way the Armed Forces – indeed, the Federal government – build, run and maintain its operations.

Net Zero installations consume only as much energy or water as they produce and eliminate solid waste to landfills, according to Katherine Hammack, assistant secretary of the Army for installations, energy and environment, who is leading the Army’s effort.i The projects include five interrelated steps: reduction, re-purpose, recycling and composting, energy recovery and disposal.

“Our mission is not just to achieve the technology integration, environmental and sustainability goals for Fort Bliss, but to define the processes, procedures and lessons learned to be able to export that knowledge to the rest of the Army. This duty is up front and cutting edge – just where Fort Bliss wants to be,” says B.J. Tomlinson, renewable energy and sustainability program manager at Fort Bliss.

One of Two Net Zero

Fort Bliss is the Army’s second-largest installation in the country, located in El Paso, Texas, and on an adjacent tract of land in New Mexico. Its combined ranges and training areas encompass more than one million acres, and it provides the largest contiguous tract (1,500 sq. mi.) of virtually unrestricted airspace in the continental United States. The airspace is used for missile and artillery training and testing.ii

The installation is under construction as it fulfills the 2005 Base Realignment and Closure plan, which is transforming Fort Bliss from an institutional training installation into a major mounted maneuver training post. By 2012, some 90,000 soldiers and family members will reside on the post.iii

Fort Bliss was one of two installations cited at the spring announcement of the pilot project involving 18 other sites that are aiming for reduced water, energy or waste. Along with Fort Carson, Fort Bliss will be a Net Zero installation, combining all three. The installations are required to submit quarterly reports documenting their challenges and successes.

“When we were identifying installations as pilots, we wanted to ensure that we had a diverse range of installations in size, mission type and geography,” says Kristine Kingery, acting director, Army sustainability policy and Net Zero installation portfolio manager, office of the deputy assistant Secretary of the Army.

“Fort Bliss is a major power projection platform for the U.S. Army, and our ability to achieve Net Zero in energy, water and waste would serve as a road map for implementing Net Zero at other large Army installations as well as provide numerous lessons learned that would benefit other installations,” she adds.

“We have to look at all aspects of projects to achieve these goals. For example, if we look at renewable energy projects that consume a lot of water, such as solar power towers, we greatly affect our Net Zero water goals especially in this arid region where water is a precious resource to be conserved,” Tomlinson explains. 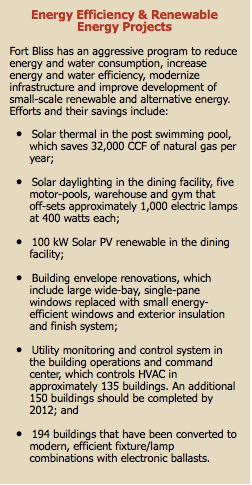 Fort Bliss is engaging in developing a systems engineering strategy that will include detailed performance modeling of the current infrastructure, increased metering, current consumption modeling, consumption growth projections and forecasting, and interface definitions, specifications and control.

“Understanding the system as a whole is key to sizing and phased integration of renewable energy in the most efficient and sustainable manner to meet our objectives,” says Tomlinson.iv

Certainly, getting a handle on energy use is most important because of the military’s interest in energy security – a term that means different things to different people. At the recent North American Energy Efficiency Forum, co-sponsored by the U.S. Energy Association and Johnson Controls, Navy Secretary Ray Mabus said, “To me, it is fundamentally about national security. It is fundamentally about energy independence and about how our military operates.”

The installation’s energy goals include:

Fortunately, Fort Bliss had an early start. Through a partnership since 2007 with the U.S. Army Engineering and Support Center, Huntsville, Ala., and Johnson Controls, a global diversified technology and industrial company, the Fort Bliss Directorate of Public Works has developed $18.8 million in energy projects that encompass numerous energy conservation measures. 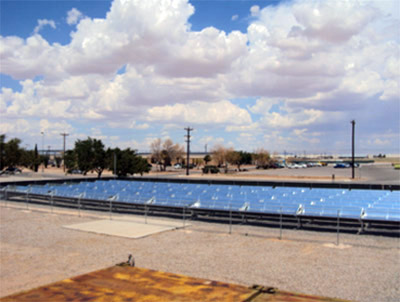 Tomlinson says the many different areas of project development present the following challenges:

“Only through cooperation and planning can we be certain to build a project that meets the needs of the Army and falls in the right place for the rules,” comments Tomlinson.

The annual cost savings from these combined water and energy improvements is expected to be nearly $2.1 million, and the simple payback on the initial investment is about nine years. Payment for the project comes from an Energy Savings Performance Contract (ESPC), a valuable tool available to Federal agencies as they strive to meet Federal energy reduction goals of 30 percent energy and 15 percent water reduction by 2015.

ESPCs have been a successful model for implementing energy efficiency retrofits in the public sector since the 1990s. Federal installations can use energy and operational savings over a specified time period to fund infrastructure improvements through a lease arrangement provided by a third-party financial institution. The projects are designed so that the annual energy and operational savings are greater than or equal to the required payments over the term of the contract, thus leaving a net neutral impact on a customer’s budget.

“The task of Net Zero would probably not be achievable without the use of ESPCs going hand-in-hand with the development of utility-scale renewable energy, water and waste projects,” explains Tomlinson.

Below are highlights of the current conservation accomplishments at Fort Bliss, according to Tomlinson:

But that doesn’t mean Fort Bliss is resting. Plans are in the works for onsite renewable energy generation from a 140MW waste-to-energy and concentrated solar thermal plant, a 50MW public utility solar photovoltaic plant, a 40MW geothermal plant and a 50MW wind plant – all linked to a smart grid, which will monitor, control and optimize energy consumption and generation for the entire post.

“As a pilot installation, Fort Bliss also is working with the other pilot installations to share challenges and lessons learned. The Army is actively working to bring technical resources internally and externally, for example from the Department of Energy Laboratories, to help,” Kingery comments.

Tomlinson credits Army leadership, Installation Management Command, the U.S. Army Corps of Engineers, the National Renewable Energy Laboratory, Department of Energy and “a host of other subject matter expertise available to the Army to answer tough questions and to help us on the way to Net Zero.”

Energy security clearly is a military issue. Indeed, more than 70 percent of convoys in Afghanistan are used to transport fuel or water. And, more than 3,000 U.S. troops and contractors have been killed or wounded protecting them because they are easy targets for insurgents’ roadside bombs, according to former Deputy Defense Secretary William J. Lynn III.vii

But the progress at Fort Bliss and other Army posts brings energy security closer to home. It will take a combined partnership with installations, state and local government, utilities, private sector companies and others to address it, but this Net Zero approach can be replicated at Federal facilities and private sector companies alike as energy, water and waste management prices rise and leaders seek solutions. 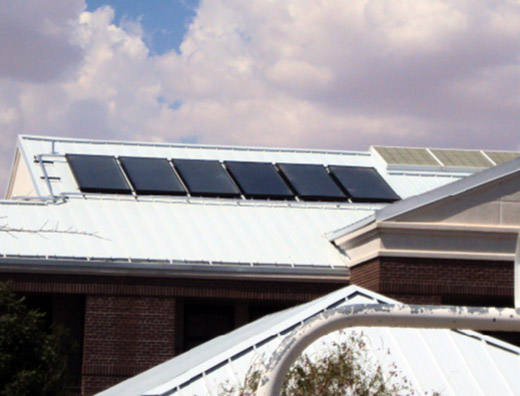