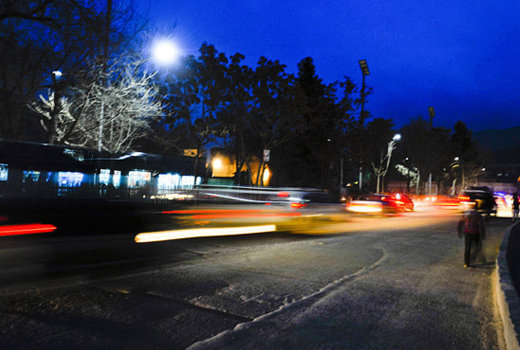 Kabul & the USACE: The Power of Streetlights

Solar-powered streetlights, installed by the U.S. Army Corps of Engineers (USACE), have boosted commerce in a busy business district in downtown Kabul, Afghanistan. According to Kabul Mayor Muhammad Yunus Nawandish, before the streetlights were in place area merchants typically kept their shops open about eight hours a day. “If we can light the city,” he explained, “they can work four or five hours more. And when they are working more, the income of the household is going up. It directly affects the level of the lives of the people and families.” Streetlights also make the city of 5 million people seem more vibrant and secure.

The Corps of Engineers plans to illuminate about 10 kilometers of roadways in the capitol city during the next few years. That’s important because the war-ravaged city has an inadequate electric grid, and most streets go dark after sunset. The stand-alone street lights generate their own power without drawing from Kabul’s limited power network.

The mayor explained the basics of solar-powered energy when he commented, “During the day, it feeds on sunlight, and at night, the light comes on. As daylight comes, it shuts off. I feel Afghanistan is a country that feeds on sunlight.” In fact, Kabul receives more than 300 days of sunlight a year, which makes it an ideal city for solar power.

The streetlights on the first phase are about 27-feet tall and equipped with solar panels and Lithium ion batteries with expected life spans of 20 years. The batteries are secured in locked containers atop the light fixtures to prevent tampering. And, they store enough energy to run three consecutive nights without a sunny day to recharge. They power light-emitting diode lamps that are energy efficient, low maintenance and environmentally friendly. The streetlights project also includes training for Kabul public works employees to maintain the lights.

In addition to improving commerce and security, the streetlights are improving Kabul residents’ perception of their city, Nawandish said. For example, since the lights were installed more families walk along the street and shop at night, thus giving the area a busy, bustling atmosphere. “It affected very nice the psychology of the people. The people are very happy. They are coming here. They are spending. They are taking photographs. They are very happy,” the mayor said in English. 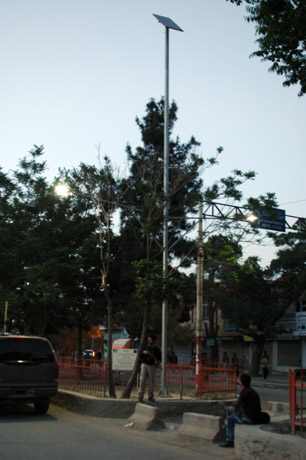 Photo by J.D. Hardesty, U.S. Army Corps of Engineers, Afghanistan District – North|Most streets are dark after nightfall in Kabul because the electrical grid is in tatters after three decades of war.

The results survey conducted for the Corps of Engineers after the first phase went operational mirrored the mayor’s impression. According to U.S. Army Col. Thomas Magness, former commander of the Corps of Engineers in northern Afghanistan, who oversaw the project, “One of the first comments we received was: ‘It feels like a city. When you have a city that is lit up at night, it feels like a city.’ That’s the psychology piece, where people feel more comfortable.”

The first phase of the project featured 28 poles and 56 lights along Jumhoriat Road from Jumhoriat National Specialized Hospital to Sherpoor traffic circle, a 0.88 kilometer stretch of road crowded with delivery trucks, cars, motorcycles, donkey carts and pedestrians. The streetlights along Foreign Affairs Road are part of Nawandish’s “Open Kabul’s Streets to the Night” program, which is intended to boost commerce along several important commercial corridors.

The Corps of Engineers and the mayor’s office have announced four phases total:

Phase 1 – Jumhoriat Road from Jumhoriat National Specialized Hospital to Sherpoor traffic circle, 0.88 kilometers, 28 poles and 56 lights. It was valued at $181,000 and completed in December 2010.

Phase 2 – Foreign Affairs Road from Jumhoriat National Specialized Hospital through Malak Azghar Square to Zanbaq Square near the Turkish Embassy, 2.05 kilometers, 140 poles and 140 lights. It was valued at $900,000 and completed in November 2011.

Phases 4 – From Great Masoud Circle to Shaheed Abdul Haq Circle to the Old Microryan residential area, 5.5 kilometers, 848 poles and 956 lights. The cost and timelines have not been finalized.

The lights are attracting plenty of attention, the mayor said. “A lot of proposals from the people, we got. They asked us to light their streets,” he said in English. He hopes the success of the program will encourage additional investment to light more streets in the desert city. Nawandish emphasized that the sense of safety created by the streetlights is unprecedented. “It’s the first time, because in this area, the security was not so good, but now you can walk at 1 o’clock or 2 o’clock in the morning,” he said. The mayor walked the entire length of the road under the streetlights after midnight to judge for himself. “I wanted to see. And I saw the reaction of the people. It was all positive,” he said.

An added benefit is that the solar-powered streetlights project appears to have fostered the renewable energy industry in Kabul. When the Corps of Engineers solicited bids to install the first phase of the project, only one Afghan company submitted a qualified bid. By the time the Corps of Engineers solicited bids for the second phase, more than 10 Afghan companies submitted qualified bids.

“We’re now working on Phase 3, and we’re finding many people have the capacity and ability to build what we’re looking for. So, we’ve created an industry in Kabul that wasn’t here before,” Magness said. “I think we’re going to have many bidders on future phases.”

Corps of Engineers’ officials are confident they’ve identified a way to improve the city in a manner that is tangible and significant to average residents. “We’re on our way, but we’ve got more work to do,” replied Magness. 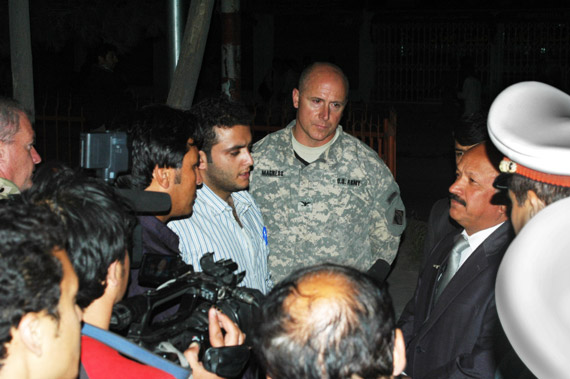