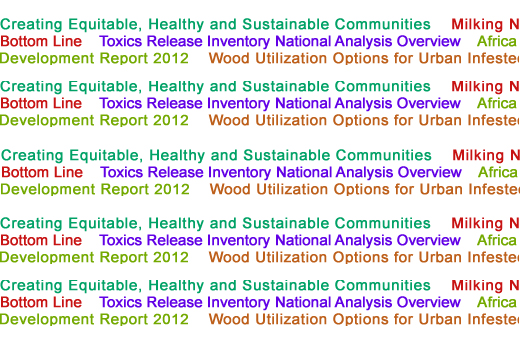 by admin November 2, 2012 Comments Off on New Research on Sustainability  Departments, Worth Knowing

1. Dumping of 180M Tonnes of Toxic Mine Waste Threatens World Waters
(www.earthworksaction.org) – Each year mining companies dump more than 180 million tonnes of hazardous waste into rivers, lakes and oceans worldwide, thus threatening vital bodies of water with toxic heavy metals and other chemicals poisonous to humans and wildlife, according to a report released by two leading mining reform groups.

An investigation by Earthworks and MiningWatch Canada identifies the worlds’ waters that are suffering the greatest harm or at the greatest risk from dumping of mine waste. The report, Troubled Waters: How Mine Waste Dumping is Poisoning our Oceans, Rivers and Lakes, also names the leading companies that continue to use this irresponsible method of disposal. Mine processing wastes, or tailings, can contain as many as three dozen dangerous chemicals, including arsenic, lead, mercury and cyanide. The report found that the mining industry has left mountains of such waste from Alaska and Canada to Norway and Southeast Asia.

The report says some multinational mining companies are guilty of a double standard. “Some companies dump their mining waste into the oceans of other countries, even though their home countries have bans or restrictions against it,” said Catherine Coumans, research coordinator of Ottawa-based MiningWatch Canada. “We found that of the world’s largest mining companies, only one has policies against dumping in rivers and oceans, and none against dumping in lakes.”

There are safer methods of disposing of mine tailings, including returning the waste to the emptied mine. In other places, dumping of any kind is too risky. No feasible technology exists to remove and to treat mine tailings from oceans. Even partial clean-up of tailings dumped into rivers and lakes is prohibitively expensive.

A number of nations, including the United States, Canada and Australia, have had restrictions on dumping mine tailings in natural bodies of water. Even these national regulations, however, are being eroded by amendments, exemptions and loopholes that allow destructive dumping in lakes and streams. Even though U.S. law long banned lake dumping, in 2009 the U.S. Supreme Court allowed Coeur D’Alene Mines of Idaho to dump seven million tonnes of tailings from the Kensington Gold Mine in Alaska into Lower Slate Lake, filling the lake and destroying all life in it.

In Canada, Taseko Mines Ltd. is proposing to reclassify Little Fish Lake and Fish Creek in British Columbia as a tailings impoundment for its proposed Prosperity Gold-Copper Mine. The watershed is home to grizzly bear and highly productive rainbow trout, and is an important cultural area for the Tsilhqot’in People. After being refused environmental approvals for the past 17 years, the company has re-applied to build a tailings impoundment to dispose of 480 million tonnes of tailings and 240 million tons of waste rock in the basin of the creek and lake, thus burying the ecosystem under 100 meters of waste.

2. Global Demand for Vegetable Oils Contributing to Deforestation
(www.ucsusa.org) – The global demand for vegetable oils is increasing at an unsustainable rate – more than 5 percent annually throughout the past decade – contributing to massive deforestation in tropical regions, according to the Union of Concerned Scientists (UCS). UCS’s report, Recipes for Success: Solutions for Deforestation-Free Vegetable Oils, which was co-authored with Climate Advisers, offers solutions for businesses, governments and consumers on producing and using vegetable oil without causing deforestation.

Vegetable oils are found in thousands of products people use and consume daily from cookies and cooking oils to shampoo and even fuel for vehicles. The growing vegetable oil market has spurred an increased demand for land, and tropical forests are being cleared to make room for large-scale farms.

Deforestation results in a loss of biodiversity, destroys ecosystems and puts indigenous peoples at risk. Globally, the most damaging effect of deforestation is its contribution to global climate change, which accounts for about 15 percent of annual carbon emissions – more than the pollution from every car, truck, plane, ship and train on Earth.

“It’s important for consumers to insist that companies ensure the products they sell are deforestation-free,” said Calen May-Tobin, policy analyst and advocate for UCS’s Tropical Forests and Climate Initiative. “If leading companies commit to using deforestation-free vegetable oil in their products, others will follow suit, thus curbing the rate of deforestation and climate change.”

In 2010, Nestle, the world’s largest food company, pledged to eradicate the deforestation footprint from its products. The company is now able to trace its oils’ supply chain to ensure growers and producers adhere to guidelines that protect the forest. Nestle set itself apart as an industry leader. And other companies are taking note. The Consumer Goods Forum, an organization of more than 650 consumer goods manufacturers and retailers, pledged in late 2010 to collectively become deforestation-free by 2020.

Governments and consumers also play a role. In Brazil, where deforestation resulted from soy and cattle farming, mounting pressure from consumers forced the government to declare a moratorium on buying or exporting soybeans produced on recently deforested land. This moratorium, along with other laws and programs protecting the forest, drastically reduced deforestation in the Amazon throughout the past five years – so much so that Brazil has lowered its heat-trapping emissions more than any other country on Earth – all while increasing the production of soy and cattle.

Although some vegetable oils don’t directly contribute to deforestation, demand for all oils is interchangeable. The best long-term option is to make all vegetable oils deforestation-free. Vegetable oil producers can help by focusing on increasing crop yields on existing plantations and expanding new production onto non-forest degraded land rather than clearing forests for new plantations.

“Producing deforestation-free cooking oils and other products is absolutely doable. We’ve seen it work in Brazil, and we are encouraged by Nestle’s policies,” said May-Tobin. “But it’s up to businesses and governments to make the commitment and consumers to hold them to it.”

3. New Poll Finds Americans Want Less Population Growth
(www.numbersusa.com) – Forty years after a multi-year bi-partisan government commission recommended slowing U.S. population growth and eventually stabilizing, Americans still would like to see it happen, according to recent poll results released by NumbersUSA. “On the 40th anniversary of that landmark event in the early environmental movement, we wanted to know if Americans today share the commission’s conclusion that massive U.S. population growth is harmful to the environment and unwanted by the citizenry,” said Roy Beck, President of the NumbersUSA Education & Research Foundation, which commissioned the national poll by Dallas-based Pulse Opinion Research.

The new poll found Americans aren’t happy the population has never stopped expanding (from just over 200 million in 1970 to more than 300 million). In fact, 52 percent say the extra 100 million has damaged the environment, contrasted to 6 percent who say it brought improvement.

The misgivings shown by Americans today are similar to what Americans indicated in a national poll by the Commission on Population Growth and the American Future, created just before the first Earth Day (1970) and which issued its final report in spring of 1972. Leaders from labor, business, civil rights and environmental activists, religion and academe contributed to the report.

“Census data show that U.S. population would be stabilizing at around 250 million if the American people had controlled things, given that their average family size has been at a zero-population-growth level ever since 1972,” said Beck. “Successive Congresses have adopted immigration increases that only 3 percent of Americans wanted in 1972. They have tripled immigration numbers and created a level of population growth that two-thirds of Americans said they opposed. Despite near-silence about population issues in the public discussions of our present era, this 40th anniversary poll shows Americans still solidly oppose their government forcing major population growth on them.”

Other findings in the new poll:

The national telephone survey of 1,000 adults was conducted by Pulse Opinion Research in April 2012. Pulse Opinion Research, LLC, is an independent public opinion research firm using automated polling methodology and procedures licensed from Rasmussen Reports, LLC. The margin of sampling error for the full sample is +/- 3 percentage points with a 95 percent level of confidence.

The Pebble mine project in southwest Alaska is a 50-50 joint venture between London-based Anglo American PLC and Canada-based Northern Dynasty Minerals Ltd., known as the Pebble Mine Limited Partnership. The report points to the dramatic drop in share price throughout the last year at Northern Dynasty, Ltd. – whose only project is Pebble Mine – as evidence of the lack of confidence in the Pebble project. The company’s share price has dropped by more than one-half, from $20 per share in February 2011 to less than $10 per share in January 2012.

“Opposition to the Pebble mine project has translated into a barrage of legal, political and regulatory hurdles over the last year,” said Jonas Kron, an analyst with Trillium Asset Management Corp., who reviewed the report. “After scrutinizing the project details, we believe there are significant risks that must be considered,” he added.

The project’s location in the headwaters of Bristol Bay, the world’s largest producer of wild sockeye salmon, presents significant difficulties for Anglo American and Northern Dynasty. While the companies have yet to enter the permitting process, they have already encountered substantial opposition from the communities and industries that rely on the salmon fishery, including recent key developments that could preclude development altogether.

“The complexity and technological challenges that face the Pebble mine pose significant risks in the hydrologically complex and ecologically rich region of Bristol Bay,” said David Chambers, PhD and president of the Center for Science and Public Participation.