The Magic of a Green Roof

by admin August 13, 2008 Comments Off on The Magic of a Green Roof  Departments, Build Smart

No other architectural style provides such a wide range of positive effects for buildings, inhabitants and the environment. Thus, green roofs meet one of the essential conditions of sustainable development – the reconciliation between economy and ecology,” explains an International Green Roof Association (IGRA) spokesman. With an inordinate amount of attention being paid to green roofs, no one can deny that, of all American green building trends, green roofs are the darlings of the sustainability world. But what exactly are green roofs? What do they do? How do they work, and why are they such a good idea?

Most people don’t know that green roofs have a long, successful European tradition and history before that. In fact, King Nebuchadnezzar II built the Hanging Gardens of Babylon, one of the “Seven Wonders of the Ancient World,” in about 600 B.C. Green roof predecessors, such as the sod roofs of early Scandinavia, American Indian soil and vegetation roofs, as well as the more recent “soddies” of North America are testaments to the saying “All that’s old is new again.” Germany is credited with developing contemporary green roof technology more than 30 years ago. Today an estimated 12 percent of their roofs are green with the industry achieving growth rates of 10 – 15 percent per year in Germany.

A green roof is a plant filled rooftop garden that can be either an integrated system built onto the rooftop in an intricate set of layers or a modular system, assembled on site and applied over an already existing rooftop structure. Visually, a green roof will behave much like its surrounding landscape. For example, plants will go dormant in the winter around the same time the tree canopy loses its leaves. Some plants will die back while others remain evergreen, but colors change to dark reds and browns. Spring growth will resume with warm days and rain showers; plants will bloom throughout the growing season. 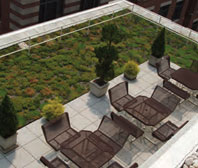 There are two basic types of green roofs—extensive and intensive. The more common, extensive green roofs, are lightweight systems with thin layers of drought-tolerant, self-seeding vegetated plants requiring little irrigation or fertilization after establishment. Extensive green roofs are built when the primary desire is for an ecological roof cover with limited human access. This system can be built on a flat roof or on a sloped roof with specially designed structural “pockets” to ensure that the soil media stays in place and doesn’t simply wash away during the first rain.

Green roofs are built on top of high-quality membrane roofing systems. Extensive green roofs include six layers: a waterproof roofing system, a membrane protection layer, a drainage layer, a filter mat, a lightweight growth media and plants. These systems usually have three to six inches of engineered growing media, which is lighter weight than traditional soil because it is comprised of lightweight aggregates and minimal organic matter. The growing media is designed not to decay over time and needs little amending to provide adequate nutrients to plant material. Extensive green roofs are meant to be self sustaining and add a low weight increase of only 16 – 35 pounds/square foot when saturated.

Intensive green roofs are primarily aesthetic yet provide sustainability plus urban beautification by using a wider variety of plants, including shrubs and trees. Intensive green roofs require a deeper growing medium and result in increased weight. Maintenance requirements, especially watering, are more demanding; often an irrigation system is specified. Structural integrity, of course, should always be checked prior to green roof installation. 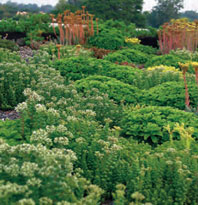 On extensive green roofs vegetation should grow to cover the soil surface, usually within two years. Initially green roofs are fairly sparse with plugs planted on 8” – 12” centers. Generally, starters fill in; and a green roof becomes lush and verdant. Drought tolerant indigenous plants, usually succulents, grow quickly. Most Sedum for instance, have adventitious roots, meaning they can form new ones at the stems and leaves in a suitable environment.

Green roofs are living systems so proper maintenance is critical for them to survive and succeed, particularly during the first 24 months. And, because it is still a roof environment, safety precautions are vital. Green roof installers must know their trade, and some offer maintenance as part of their recommended ongoing preventive plans. During hot, dry spells the system should receive water. While irrigation seems counterintuitive for a roof designed to capture and to detain stormwater, irrigation is imperative to have a healthy, functioning, long term green roof system.

Environmental and Other Benefits

The IGRA documents the following private benefits of green roofs:

The IGRA documents the following public benefits of green roofs:

These well-documented social and environmental benefits provide building owners with a significant return on investment, which is why companies such as Skokie, IL-based Tecta America Corp., the nation’s largest commercial roofing contractor, are making a commitment to this important environmental effort. “Tecta America strives to develop roofing solutions that can help to turn our customers’ roofs into an environmental asset,” says its CEO and President, Mark Santacrose. “Tecta’s Environmental Solutions provide the perfect combination of environmentally pro-active energy-producing ideas, as well as solutions that help to abate negative outcomes such as the urban heat island effect.” 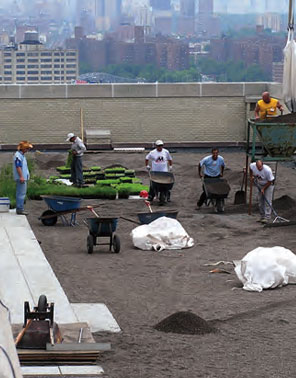 Initial green roof installation cost can be one and one-half to two times the cost of a traditional roof. But, with proper maintenance, a green roof can double the roof’s life expectancy. Add to that heating and cooling savings, amortized over a roof’s life, and a well-kept green roof comes out on top fiscally. “Green roofs can save millions of dollars in energy consumption, improve air quality and reduce greenhouse gas emissions. We’re committed to making green roofs an important part of our future commercial roofing efforts,” said Tecta America’s Green Roof Program Manager, Angie Durhman.

Environmentally conscious leaders in cities like Washington, D.C.; Seattle; Minneapolis; and Chicago agree as they continue to promote green roof incentives in programs modeled after European ones. As part of Mayor Richard Daley’s efforts to make Chicago the most environmentally friendly city in the nation, in addition to providing green roof grants, the Windy City now requires that buildings receiving tax increment financing [TIF] support include a green roof element as part of their construction and building plans, and the city has fast-tracked permits that include a green roof element.

The American Society of Heating, Refrigerating and Air-Conditioning Engineers [ASHRAE] even has conducted a study about Chicago’s City Hall Green Roof and identified a direct correlation between decreased ambient air temperature and cooling energy use. Every one-degree drop in Fahrenheit temperature elicited a 1.2 percent drop in cooling energy use. This equates to enormous savings because, on a 90-degree day, green roofs maintain a 95-degree surface temperature while a dark roof’s surface temperature is a blistering 160 degrees. The study suggests that if, over a 10-year or longer period, all of Chicago’s buildings were retrofitted with green roofs (to cover 30 percent of the total land area), savings could yield $100 million annually from reduced cooling load requirements. This strategy would also slow chemical processes that produce ground level ozone, nitrous oxides and smog and, would help offset production of sulphur dioxides from coal-fired utilities.

“Green roofs benefit neighborhoods and the environment in many ways, which is why forward-thinking cities continue to promote their use when considering new construction or rehabbing older construction,” explained Durhman. Generally, given the increased life expectancy and long-term minimized maintenance costs, coupled with energy savings and tax/building incentives, over time, green roofs end up costing about the same price as traditional roofs. Yet the bottom-line environmental and social benefits are priceless.