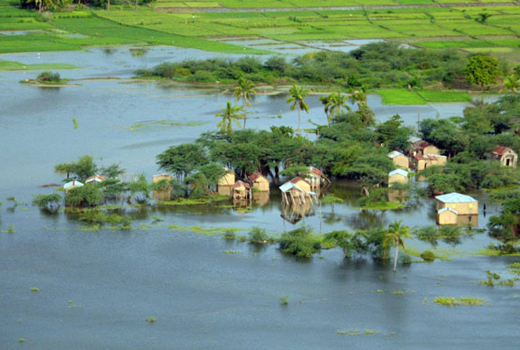 The Necessity of Global Climate Monitoring 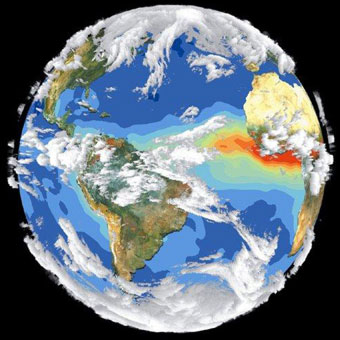 While CO2 is essential to sustaining plant life that is part of the global ecosystem, CO2 atmospheric concentrations are increasing at an accelerating rate tied to rapid global development. For thousands of years, the mean level of atmospheric CO2 was below 275 parts per million (ppm). Since the start of the industrial age, these levels have risen to almost 400 ppm. This matters because CO2 is a Greenhouse Gas (GHG). A GHG prevents some heat generated by solar irradiation of Earth’s surface from re-radiating into space. CO2 levels in recent geologic epochs have sustained global temperatures at levels that support life as we know it. However, large GHG increases (including methane and other industrial gas emissions), as well as some aerosols (e.g., soot), change Earth’s thermal balance, which forces complex changes to global climate.

Large-scale GHG emissions and aerosols, as well as massive changes in land vegetation cover due to human activity, are altering many drivers of Earth’s climate. These changes impact global temperature profiles, cloud cover, polar-region ice cover, ocean conditions, storm tracks and storm intensities. Because of Earth’s complex climate system dynamics, more frequent droughts and floods result from these changes in different parts of the world. Land ice meltdown in Antarctica and Greenland lead to sea level rise, which will eventually inundate low coastal land where hundreds of millions of people reside. In addition, transition of winter mountain precipitation from snow to rain will drastically alter seasonal outflow water patterns on which much of the world’s agriculture depends.

If world governments can agree on how to mitigate climate change, then international protocols may be forthcoming regarding scheduled reductions in GHG emissions. Enforcement of such agreements will be required to assure economic impact parity. Specific GCM-related capabilities that monitor local GHG emissions will be a necessary part of those protocols’ compliance verification.

What GCM Must Do

GCM is the process of observing environmental properties that drive Earth’s climate system to distinguish cyclical meteorological phenomena from sustained change trends. In addition to observing the atmospheric state, GCM must also monitor interaction of atmosphere and land conditions, as well as the state of the oceans. 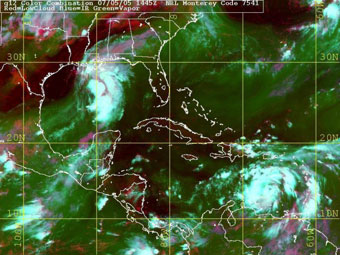 Ocean characteristics critical to climate include temperature, color, salinity and acidity profiles. Ocean temperature reflects how much stored energy is in the ocean and how it will exchange heat, as well as water vapor, with the atmosphere. Ocean color impacts solar radiation absorption and helps characterize biologic activity, including conversion of CO2 to oxygen. Changes in ocean acidity can be a sign of altered levels of dissolved CO2 coupled to increased atmospheric CO2 levels.

Currently, GCM data is obtained primarily through use of dedicated science platforms and operational weather observation systems. An ongoing challenge is that many dedicated climate science platforms observing important climate-driving properties are funded as one-of-a-kind, limited-life experiments with no plans to transition them to a sustained capability.

Many factors driving climate change would be observed as part of an OGCM system. However, to fully understand interrelationships between these factors, observations will have to be coordinated. This will require tools that automatically plan climate monitoring mission observations with planning applied simultaneously across a range of observation platforms. The means to enable this capability have been prototyped but not yet widely applied. To be most effective, monitoring planning tools would automatically schedule and optimally coordinate all observation details subject to high-level objectives set by OGCM system operators. Those objectives could be adjusted when natural events warrant perturbations to nominal monitoring plans. Events that may justify temporary, partial reallocation of observation resources include: natural disasters with humanitarian consequences for which more detailed and frequent monitoring may improve first responder effectiveness (e.g., major floods in heavily populated areas) and natural events, which alter parameters impacting climate trends (e.g., major volcanic eruptions with massive CO2 and aerosol releases).

OGCM data will be collected for many decades. Its validity must be assured and bases for derived data comparison must not change over time. This poses significant data calibration challenges due to observation instrument limits, sensing technologies that evolve over time and changing background conditions against which measurements are made. To address calibration needs, dedicated, carefully maintained ground and ocean-based stations are needed to determine local climate truth conditions, which should also be observed by airborne and space-based platforms. Coordination of remote observations with local measurements will enable removal of errors resulting from comparative observational differences across instruments on different platforms. Means will also be needed on each of the monitoring platforms for removal of observation errors with respect to references with well-known properties. This may include dedicated wavelength emitters with known spectral characteristics that can be periodically observed in parallel to actual climate monitoring. 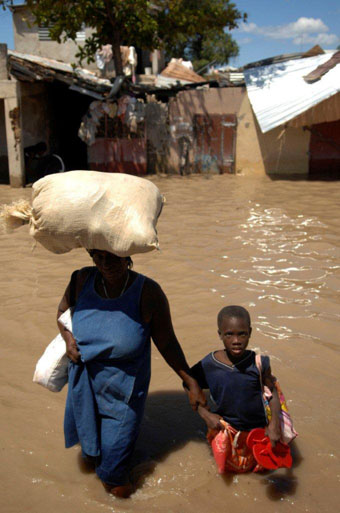 Climate scientists have determined the accuracy needed for OGCM observations to adequately remove much uncertainty in global climate models. This accuracy is specified both as a required precision of current measurement, and as a required observational quality stability over a decade or more. For many factors that should be observed by an OGCM system, the desired accuracy exceeds current observational state-of-the-art. This accuracy gap is especially large for Earth’s albedo, which is used to quantify how much solar radiation Earth reflects back into space. The albedo is a key factor in Earth’s energy balance that drives climate. Since quantification of albedo must be determined indirectly from a combination of other measurements, its uncertainty is an accumulation of possible errors in all contributing observations. Consequently, continued OGCM instrument technology advancement is needed to enable more accurate and stable observations over long term.

Current orbital platforms used to collect climate data or weather information that support climate monitoring have significant limitations. Examples of these limitations include the following: Satellites that follow orbits over Earth’s poles hundreds of miles above the planet have gaps of hours between observations of given regions; geosynchronous satellites that can observe the same locations on Earth continuously from about 23,000 miles above the equator have resolution limits due to their distance and poor views of Earth’s polar regions; and from any orbit, visible and infrared wavelength observations are impacted by cloud cover. These observation constraints from current orbital platforms motivate requirements that an OGCM system include additional, complementary observational technologies to enable a more complete observational record.

Deriving value from collected GCM data requires the data be readily accessible to all users in easy-to-apply formats. This, too, poses major challenges. Currently, each major organization collecting data relevant to climate monitoring (e.g., NASA, NOAA, the Department of Defense, and non-U.S. space agencies) has its own rules for data management, subject to project-specific data formats. The resulting databases often limit access and provide data in many different formats, making it difficult for users to combine information for integrated analysis. The United States Group on Earth Observations (US GEO) and the Global Earth Observation System of Systems (GEOSS) are domestic and international organizations set up to coordinate Earth observation missions and to facilitate data sharing. However, support of U.S. GEO and GEOSS remains voluntary and limited resources are available to pursue their goals.

A primary challenge in establishing an OGCM enterprise is how to organize it to be both effective and efficient. Current GCM activities in the U.S. span many agencies with varied oversight structures. Furthermore, while OGCM is necessarily international, formal structures are needed to ensure long-term international collaboration with equitable partition of responsibility for observation platforms and resulting, processed data distribution.

Data handling must be coordinated across OGCM participants. Instead of current practice whereby each organization involved in GCM establishes unique data handling rules, universal data processes and formats must be accepted and applied by all OGCM participant agencies, organizations and nations. This should apply to data reduction, archiving and access processes. Also, data collected by any party must not be subject to export and/or exchange restrictions. 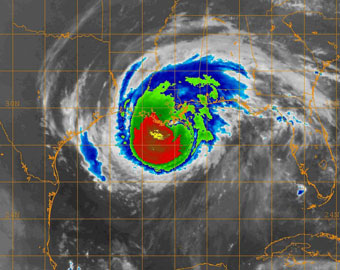 If international protocols or treaties are approved that emplace regimens to mitigate climate change, including GHG emission reduction mandates, then an organizational framework and technical means will be needed to verify compliance. The organizations assigned this responsibility will require a budget and authority to emplace and to manage infrastructure needed to collect and to analyze data that can enable assessment of overall compliance at national levels and identify causes of non-compliance at a local level.

U.S. and international leadership are key to creating and to assuring an effective OGCM enterprise. Specific, sustained monitoring objectives must be established. To assure the U.S. pursues its applicable objectives, Executive Orders and/or legislation that establish an organizational framework and assign responsibilities will be essential. The assigned authority and responsibility must be accompanied by commensurate budgetary and personnel resources. Parallel international agreements will be needed to assign OGCM responsibilities to each participating nation and to obligate application of required resources.

Developing better understanding of climate change trends by building on existing GCM and data dissemination capabilities could empower, even compel, local governments to take actions that protect resident populations from resulting threats. The same information could be applied by national security forces to anticipate and to prepare for derived humanitarian and security challenges. The implication is that timely leadership in climate change response can be provided from the bottom up, even if current GCM capabilities only gradually evolve toward an OGCM enterprise.

GCM can be incrementally advanced toward an operational capability with actions and agreements possible now. Such actions would emplace tools for effective adaptation and mitigation responses to future climate change impacts. The following recommendations reflect some of the most important incremental initiative candidates:

Actions to Consider at the U.S. Government Level

Agreements to Seek at the International Level