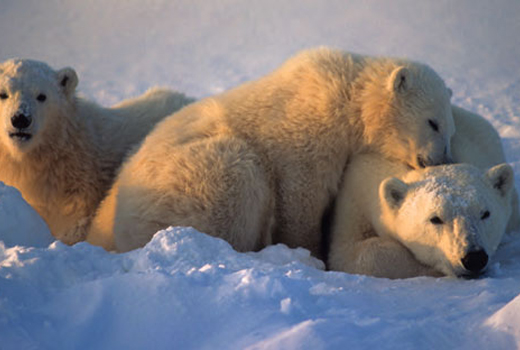 The Need to Extend Protection to the Imperiled Polar Bear

Polar bears occupy a special place in people’s hearts around the world. These exceptional animals are icons of the wilderness as well as symbols of majestic places where Earth’s oldest life cycles still continue.

Over thousands of years these amazing creatures have adapted to a lifestyle reliant upon ice. From the pads of their feet, where tiny “suction cups” have evolved to ensure a foothold on the slippery cold surface, to their dietary dependence upon ice-dwelling seals, the mammoth bears have become one with an environment unequaled in ruggedness and beauty. These mammals rest, breed and sometimes even give birth on the Arctic Sea ice off the coasts of Alaska, Canada, Greenland and Russia. They even hunt their food of choice — ringed and bearded seals — from the sea ice, waiting for the seals to come up for a breath. Polar bears also use sea ice to move between offshore feeding areas and denning sites on land. But the sea ice is quite literally melting from beneath the bears’ feet. Global warming effects are visible at a colossal rate in the far-north’s Arctic Seas. In fact, the Arctic Ice Cap shrunk approximately 10 percent per decade between 1979 and 2007, an astonishing loss of 28,000 square miles per year. This decrease in sea ice has jeopardized America’s polar bears living in Alaska’s Chukchi and Beaufort Seas — also known as the “Polar Bear Seas” — because one-fifth of the world’s polar bears call them “home.”

Scientists currently report unprecedented problems with polar bears in Alaska’s Beaufort Sea. The U.S. Geological Survey (USGS), sole science agency for the U.S. Department of the Interior (DOI), recently sent researchers to study Alaska’s polar bear population. Alarmingly, the investigators found very few cubs and an enormous gap in the sea ice, which “eliminates a lot of the really important foraging area for polar bears,” said Steve Amstrup, a USGS wildlife research biologist and Ph.D. who has been studying polar bears in Alaska’s Arctic for nearly 30 years. Of the 57 polar bears he has thus far tagged in spring 2008, only one has been a yearling — a cub born last year. Amstrup believes this low statistic illustrates that fewer cubs are surviving as the sea ice, a critical location for the bears’ food source, shrinks. It’s clear that human actions have placed the great animal in danger; we now must work to save the increasingly imperiled polar bear from an untimely demise.

Spurred by legal action, the DOI began considering the polar bear as a possibly threatened animal under the Endangered Species Act (ESA) in January 2007. Under the law the federal department had one year to collect comments about this proposal and to decide whether the polar bear truly is a threatened species. Comments poured in at a record rate — 670,000 letters, faxes, postcards and e-mails. In September 2007, USGS scientists reported: “Future reduction of sea ice in the Arctic could result in a loss of two-thirds of the world’s polar bear population within 50 years.” Pressure built as the January 2008 DOI decision deadline approached. American newspapers were editorializing in favor of the bear’s being protected; schoolchildren were sending pleas to save the magnificent animal; and Congress was drafting legislation to address the causes and impact of global climate change. 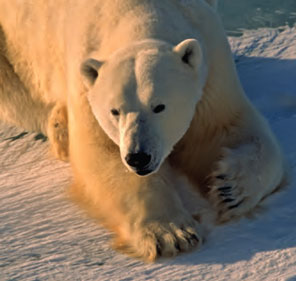 But the January 2008 deadline for action came and went. Instead of meeting its legal requirement to decide the polar bear’s fate, the DOI moved to open up the animal’s habitat to massive new oil and gas operations. In February 2008 the Department offered nearly 30 million acres of the bear’s prime habitat in the Chukchi Sea for lease to oil companies. Not only is this unspoiled, pristine water home to scores of polar bears, but it also provides the essential habitat for walrus, whales, ice seals and a host of other species. Instead of protecting this area to help sustain the bear as well as other endangered wildlife, the DOI acted to turn these ecologically sensitive seas into a boomtown for oil and gas operators.

Risk to the Polar Bear Seas from oil and gas drilling has been documented, ironically, by the Department of the Interior. The Department’s Minerals Management Service (MMS) estimated a whopping 33 to 51 percent chance of a large oil spill in the Chukchi Sea if drilling operations were approved. Despite this risk MMS went ahead and sold more than $2 billion worth of oil and gas leases to Shell and to other oil companies.

The U.S. Fish and Wildlife Service (USFWS), a DOI agency, recently said that the potential for oil spills and the subsequent impact on polar bears are major concerns. The agency’s worries have been buttressed by a 2003 National Research Council report, which found that “no current clean-up methods remove more than a small fraction of oil spilled in marine waters, especially in the presence of broken ice.” In other words, no technology currently exists to recover oil spilled in the icy waters and harsh weather conditions found in the Chukchi Sea. Exposing polar bears to oil slicks, spills and leaks, as well as to other disturbances that come with massive oil and gas exploration and drilling operations, will further endanger a species that is already on the brink of disaster.

Shell Oil and similar fuel companies are poised to gain final approval from the Department of the Interior to begin major new activities in the Polar Bear Seas this summer. Shell will begin “seismic testing” a major step toward eventual oil drilling and development — without having to ensure that its operations, which involve a small armada of vessels and associated aircraft, have minimal impact on polar bears. Such sensitivity would be required if the polar bear were listed under the Endangered Species Act.

The DOI’s foot-dragging over listing the polar bear as a threatened species came to an end May 14, 2008. The Department decided to list the polar bear as a threatened species under ESA but did not take any action to reverse its stance on oil drilling in prime polar bear habitat or to address the threat posed by greenhouse gas emissions that are causing the melting of sea ice. In fact, Interior Secretary Dirk Kempthorne said during his announcement of the decision that the “listing will not stop global climate change or prevent any sea ice from melting.” In other words, the polar bear listing was completely hollow.

In the absence of DOI action, Congress must ensure that this exceptional, unique animal receives every protection it needs to survive. With input from the Alaska Wilderness League and others, I have prepared legislation that would direct the National Research Council to gather information and to report how climate change is impacting the ecology of living marine resources in the Polar Bear Seas and how oil– and gas-related activities could affect plant and animal species, marine and coastal environments, as well as Alaskan Native communities and their subsistence lifestyles. The proposal would also direct the DOI to designate critical habitat areas for the polar bear and would require vastly improved oil spill response technologies prior to embarking on massive new oil and gas operations in these pristine waters.

With sea ice melting at an astronomical rate, we must not add oil rigs and the risk of massive spills to the challenges facing the polar bear’s continued existence. We must do the right thing and extend all of the protections to the polar bear and its habitat. There is still time for us to ensure that these wonderful animals will be around to capture our children and grandchildren’s hearts. But time is running out quickly.