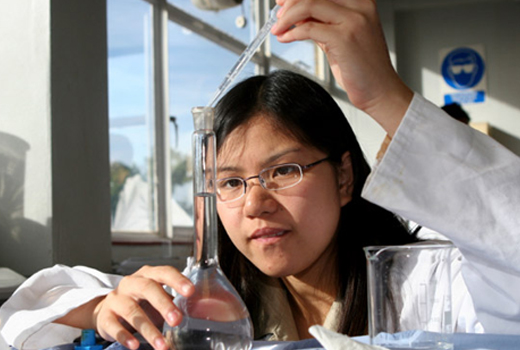 The U.S. Army Corps of Engineers (USACE) is one team made up of a headquarters office, division offices, district offices, centers, labs and active components – each working to provide better, safer and more environmentally sound services to the nation each day. The Corps has taken this approach to heart realizing that those it serves and protects are also its employees’ mothers and fathers, sisters and brothers, spouses, sons and daughters, and those who will lead USACE and this country in the future.

It’s the students that Corps employees are committed to working with through a wide range of education programs, which are as innovative and diverse as the organization itself. But one tenet permeates all the Corps’ educational outreach efforts: It’s a way of investing in the future.

Former Chief of Engineers Lt. Gen. Robert L. Van Antwerp summed it up this way: “Investing in our future leaders through training, education, developmental assignments and mentoring is how we must do business.”

Goal 4 of the U.S. Army Corps of Engineers’ Campaign Plan calls for building and cultivating a competent, disciplined and resilient team, which is incumbent upon having the right people in the right jobs. One way of ensuring that happens is to make sure today’s students are being educated in science, technology, engineering and mathematics (STEM) as well as the arts and human sciences.

In the Corps’ Savannah District, in Savannah, Ga., educational outreach spans a wide spectrum of disciplines. The District has forged and continues to maintain partnerships with several area schools from elementary to college level. A key focus surrounds activities related to National Engineer Week, held each year in February. During the 2009 recognition, Lt. Col. David London, the district’s deputy commander, led a group of science and engineering professionals giving hands-on presentations to a group of fifth graders. “If we don’t get kids interested in math and science now we have the potential to lose our place in the world of science and technology,” London said.

This year marked the 60th anniversary for Engineer Week and brought together teams from the District’s Engineering and Construction Divisions to serve as judges for the Savannah Regional Science and Engineering Fair. Meanwhile, another Corps group introduced mechanical and electrical engineering, architecture, geology and hydrology to students at Jenkins High, a magnet school with the only engineering curriculum in the county.

Kate Dixon, a mechanical engineer with the Corps, knows first-hand the importance of the Jenkins partnership with the Corps. An alumnus of Jenkins herself, Dixon said, “It’s nice to be able to go back and see they are continuing with an emphasis on engineering and robotics. I think it makes a difference, and it’s good for students to be able to see someone who’s gone through the program and is working locally as an engineer.” 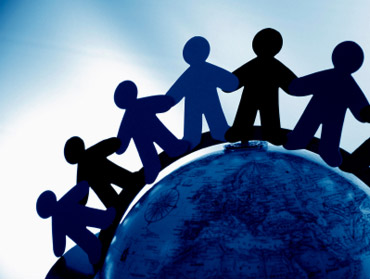 However, science and technology aren’t the only focus areas for the District’s outreach program. Community involvement plays an integral part of the job for Corps park rangers. They teach important water safety messages to children in hopes that kids will not only wear life jackets, but insist their parents do as well.

It’s serious business to David Quebedeaux, a veteran Savannah District employee who’s responded to 75 drowning cases. He developed his own unique style of delivery to make the point stick with his young audience. “We’re reaching kids and families who live in a lake environment,” Quebedeaux said. “Bringing them water safety is a very fun and important activity that the Corps of Engineers can do.”

Ranger Erin Parnell not only spreads the safety message, but she asks children to turn off the computer and television and tune-in to the world outside. During a community-wide fishing derby she helped organize, Parnell encouraged participants to follow in her footsteps. “As a little girl I always went hunting and fishing with my father,” she said. “Those memories created my passion for the outdoors, and that’s what led me to study parks and protected areas management.”

Those examples illustrate some of the educational outreach programs a typical USACE district may undertake. Many more abound, some going well beyond a one-day event or activity.

The U.S. Army Engineering, Research and Development Center (ERDC), in Vicksburg, Miss., has been sponsoring a high school robotics team with students from Warren Central and Vicksburg High Schools for the past 13 years. Team 456 competed March 17-19 in New Orleans at the Bayou Regional of the international For Inspiration and Recognition of Science and Technology (FIRST) Robotics Competition (FRC) where teams of students and professional scientists and engineers from around the world had six weeks to build a robot to complete a uniquely designed challenge.

This past year’s challenge was for the robot to hang different shaped, inflated inner tubes on a grid of pegs reaching as high as 10 feet. And, in the last 10 seconds of each match, each full-sized robot had to deploy a miniature robot to climb a pole in a race against other miniature robots.

The robotics team offers students opportunities they would not experience inside a normal classroom setting. They learn skills in engineering, programming, physics and math that they then apply to building a tangible product. Throughout the years, ERDC has supported the team by providing space for the construction of the robot and practice field along with providing scientist and engineer volunteers to mentor the team, said Chuck Dickerson, one of the ERDC mentors.

Heading into the March Bayou Regional, Team 456 was seeded first and was the only undefeated team in the qualification matches. Although the team advanced to the last round of the finals before losing in a best two-of-three match, Team 456 took home the Underwriters Laboratory Industrial Safety Award for the fourth consecutive year and the Engineering Excellence Award sponsored by Delphi. And, Carra Channell, the team’s safety captain, was recognized as the “Safety Star of the Day.”

The FIRST Robotics Competition began in 1992 with 28 team competing in a high school gym in New Hampshire and has since grown to more than 2,400 teams expected to compete in 2012 from around the world. Dickerson called FRC the largest and most prestigious engineering competition of its kind in the world, noting that Black Eyed Peas performed at the “halftime show” at the International Championships in St. Louis. 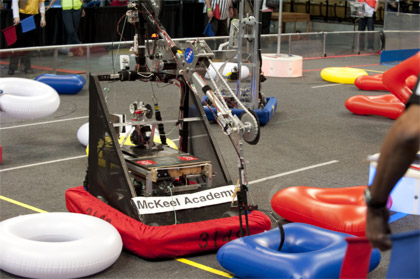 Photo credit: NASA/Glenn Benson
About 60 high-school teams participate in the FIRST competition at the University of Central Florida in Orlando.

Founded by Dean Kamen, the FIRST organization is designed to promote science, technology, engineering and mathematics in U.S. schools. STEM is viewed by many educators and professionals as the catalyst for unleashing opportunities for success and economic prosperity.

But how does the U.S. drive that message home to its youth? And are they even listening? STEM-related courses often are met with disdain and apathy by young students who may find them challenging and unappealing. And, to many in underrepresented and underserved communities, the four-letter acronym is hardly recognized.

A Civil Rights Data Collection survey reveals that English learners are often denied access to the kinds of classes, resources and educational opportunities necessary to be successful in college and a career. While social and economic barriers may differ among communities, the need to establish a connection for students and families between STEM and every day, real life issues is universal. So, too, is the need to excite students about the careers and impact they can make with a solid STEM foundation.

The Corps of Engineers has partnered with the Department of Defense (DoD) to make this happen through the STEM School Support Initiative (STEM-SSIP), a $7.5 million pilot program, funded by the Office of Equal Opportunity and managed by the Corps. Like DoD, the Corps is focused on securing this nation’s economic future by improving the pipeline into STEM career fields.

In 2009 the Corps awarded the performance-based contract to Great Minds in STEM. GMiS launched STEM Up, a comprehensive community-building approach to STEM education to bring STEM college and career pathways into schools and underserved communities by providing educational and enrichment opportunities to 19 K-12 schools in the Boyle Heights community of East Los Angeles.

“Through STEM-SSIP, the Corps works with teachers, administrators, parents and community stakeholders with one goal in mind: increasing awareness and interest in STEM to improve the future pool of quality professionals,” said Col. Mark Toy, Los Angeles District commander.

“Since launching STEM-SSIP, the Corps’ L.A. District STEM educational outreach activities have more than tripled and the level of employee interest and involvement has grown. We can make a significant impact in the lives of these students by simply providing mentors and role models,” Toy added.

And now, access to STEM awareness programs is only a phone call away.

The Corps’ Sacramento District developed a Blanket Purchase Agreement (BPA) for STEM programs. This new contracting tool is a resource that other districts and installations as well as other Federal agencies can use in promoting STEM awareness among 5th through 12th graders.

The sponsoring agency may choose from several programs, including:

The Corps’ Fort Worth, Galveston and Jacksonville Districts have already initiated a call for STEM programs, with the Fort Worth and Galveston Districts having sponsored the first USACE STEM Awareness Program workshops under the Blanket Purchase Agreement in mid-September 2011 in San Antonio and Houston.

Through STEM educational outreach, the Corps continues seeding its future workforce by mentoring youth and attracting minorities who comprise a significant portion of its demographics.

“It’s not just an engineer’s show at the Corps; it takes a very diverse group of minds, cultures and different professions to accomplish the work and projects we do,” said Damian Lariviere, a Los Angeles District project manager.

“We view these students as our legacy, not just for us, but for America,” said Blanca Roberts, the National STEM Awareness Program Manager at USACE Headquarters. “These young men and women represent our nation’s next great leaders in technology. Our world is more complex today than it’s ever been. The demand for engineers and scientists is increasing at a record pace. It’s more important than ever that we actively work to improve and to broaden our educational outreach of STEM to underrepresented youth.

“Too often these students don’t think they can go anywhere, that they have no choices. But through programs like STEM, working with mentors, they see that they can do it,” she added.

“I believe in it. I’m not sure that enough people realize that the United States is going to be in a crisis situation very soon when it comes to science, technology, engineering and math. We are falling behind everyone else, and we need to hurry up and get that reversed,” Roberts said. 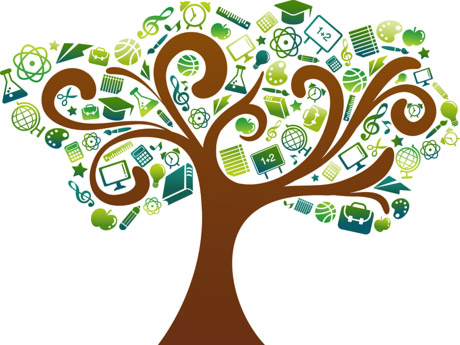