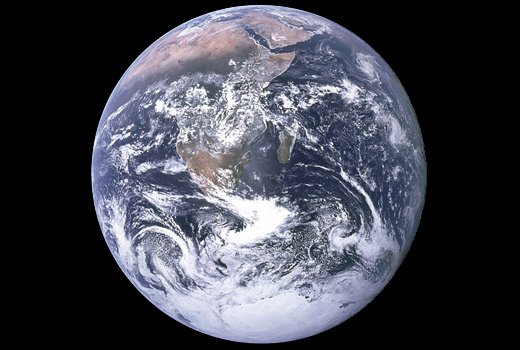 Darl Sagan, the astronomer whose award-winning Cosmos television series translated the mysteries of the planets and stars, once arranged for the Voyager spacecraft to reorient its skyward-looking camera to turn back and take a picture of Earth. From Voyager’s vantage point of about 6 billion miles away, Earth appeared as a tiny, pale blue dot in a vast darkness. Sagan penned a brief but poignant photo caption: “That’s here. That’s home. That’s us.”

At a much closer altitude – although still some 300 miles high – astronauts have trained their hand-held cameras on Earth. One snapshot taken by the Apollo 17 crew is reportedly the most widely distributed photo in modern history. Dubbed the “Blue Marble,” it captures an Earth hemisphere fully illuminated by the sun and showing the continents of Antarctica and Africa, Madagascar and the Persian Gulf. (See beginning photo.)

A closer look reveals not just contours of land masses but wild swirls of clouds and the oceans’ expanse. A single picture conveys simultaneous interactions of atmospheric, terrestrial and oceanic processes – in short, a living, breathing environment. Imagine flying a bit closer to the African continent and peering down to see dust storms in Africa and fires in Madagascar. In fact, space technology advances now allow this more detailed look. Below left is a satellite image of a large dust plume moving northwesterly from Senegal outward over the Atlantic Ocean. The plume extends more than 1000 miles from the Cape Verde Islands (lower left) to the Canary Islands (top center) off the Moroccan coast. Below right is another satellite view of dozens of fires (tiny red dots) along Madagascar’s eastern coast. 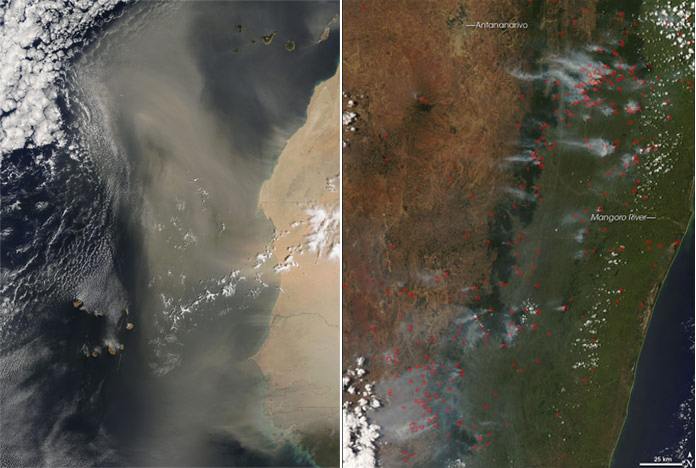 Fundamentals enabling Earth observations satellites to serve these ends are straightforward. They can be oriented to orbit near the poles, the equator or somewhere in between depending on regional interest. Attached to the satellites are observing instruments, which are, essentially, cameras built with three features familiar to any camera buff —temporal, spectral and spatial resolution. Temporal resolution is the frequency with which the satellite passes over the same spot on Earth. A satellite orbiting at higher altitudes revisits a location more frequently than at lower altitudes. Spectral resolution is the “tuning” of the instruments to see a portion of the electromagnetic spectrum – e.g., visible or infrared portions. For instance, atmospheric water content, which is useful weather forecasting information, has a unique spectral signature. Ocean water salinity – important for monitoring aquatic ecosystems health – has a different spectral signature. Spatial resolution refers to ground area captured in the image and can range from nearly a hemisphere to fractions of a square meter. High spatial resolution images showing car roofs and treetops can be seen in Google Maps, for example. 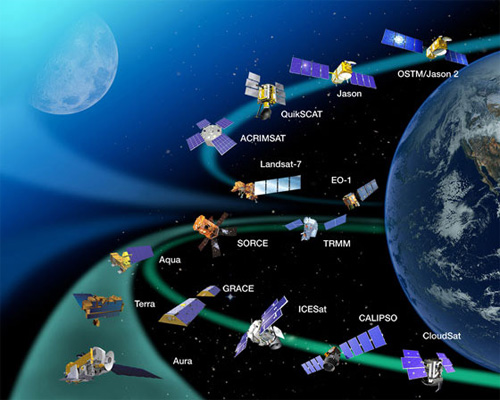 These features come together to serve a host of purposes, such as environmental monitoring, for which repeated observations are desirable. For example, U.S. and European satellites track ongoing international efforts to reduce chlorofluorocarbon (CFCs) use linked with ozone depletion. In conjunction with other data, satellite observations allow periodic measurement of changes in the stratospheric ozone layer – the “good” ozone that helps shield Earth from ultraviolet radiation. Because chlorine in the CFCs has a long effective life, and because other factors such as upper atmospheric temperature also influence the catalytic reaction with chlorine, continued ozone monitoring is vital. In fact, the Protocol requires regular scientific assessments on ozone layer health.

Another routine satellite use is monthly monitoring of global agricultural conditions to provide drought early warning, to predict food shortages and to plan food assistance deployment. This began partly in response to an incident known as the “great grain robbery.” In the 1970s, a severe drought in the Soviet Union significantly reduced its grain harvest. The country began quietly purchasing large amounts of world grain inventories, which led to a steep rise in global food prices. As a result, expected crop yields and worldwide agricultural productivity are now routinely forecast. The U.S. Department of Agriculture (USDA) uses a variety of satellite data, ranging from weather forecasts to land-use observations, in combination with foreign government official reports, overseas post reports and other data to provide early warning and critical analyses of major world crop events.

Natural disasters for which satellite observations have been useful include mapping coastal change, recovery and damages caused by Hurricanes Rita and Katrina, and mapping the plume dispersion from Iceland’s Eyjafjallajokull volcano. Most recently, satellites provided close to real-time tracking of the oil spread from the April 2010 Gulf of Mexico Deepwater Horizon incident. One challenge in deploying equipment and personnel to contain the spill and to prevent ecosystem damage was tracking movement of oil toward land.

The images below, taken by satellites in late May 2010, show oil moving toward Mississippi River delta wildlife habitats. In both images, each of which covers an area of about 68 by 74 miles, the oil spill source is at the bottom right edge. The arc-shaped land pattern to the north is the Chandeleur Islands, part of the Breton National Wildlife Refuge (the second oldest wildlife refuge in the U.S.). The left image shows the “true color” – what the naked eye would see – with green indicating the delta land vegetation and the bright areas showing the oil. (The sun glints off the oil.) The right image provides additional detail relevant for the response efforts. Different spectral bands distinguish silt-laden water (in orange, red and violet) from oil (in shades of dark blue to black) while land is turquoise. Oil filaments can be seen crossing the island barrier and entering the Chandeleur sounds, as well as approaching the shores of some of the bays at the delta’s eastern and southern edges. 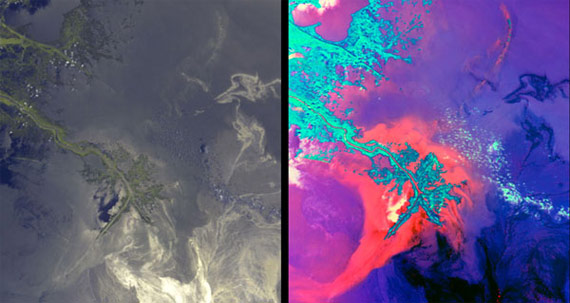 In addition to monitoring the environment and responding to disasters, Earth observations enable basic inventories of natural resource supplies. One of the earliest Earth observation uses was for geologic exploration, particularly in remote areas of the world. The satellite vantage point enabled identification of surface oil seeps and topographical geological formations that in some cases can be seen easier from space than from on the ground. In the past few years, German and U.S. researchers made a surprising discovery of satellites’ capability to detect groundwater. Residing beneath soil surface in permeable rock, clay and sand, groundwater exists in aquifers that can extend hundreds of feet underground.

Researchers were using a pair of twin satellites (known as “GRACE,” the Gravity, Recovery and Climate Experiment) designed to measure tiny changes in Earth’s gravity field. As the satellites orbit 300 miles above earth, their positions change – relative to each other – in response to variations in gravity. Microwave ranging systems measure microscopic changes in distance between the two craft. The satellites work together to sense changes in Earth’s mass due to movement of water in oceans, ice, atmosphere and on land. While making gravity measurements, researchers detected significant groundwater changes in California and the Himalayas. Deep soil moisture and groundwater data such as these can be integrated into national and regional drought monitoring systems.

Satellite observations are used to inform understanding, modeling and projections of the global carbon cycle, the fundamental building block of Earth’s climate system. A list compiled by World Meteorological Organization experts identifies a necessary set of about 40 physical parameters, ranging from ocean temperatures to water vapor in clouds, that are part of this cycle. Approximately half of these are best collected by satellites while the remainder are collected by aircraft, balloons, ocean buoys and ground monitors.

Earth observations of climate variables allow governments to identify trends in and to project atmospheric concentrations of greenhouse gases. In addition, they serve as a means to evaluate stabilization of these gases and changes in global temperature. Discussions are also underway regarding using satellites as a technical means to help verify future international or multilateral agreements for reduction of greenhouse gas emissions. 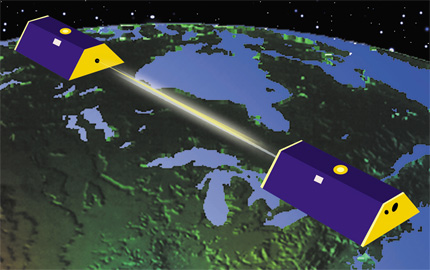 With the proliferation of Earth-observing satellites, questions often arise with respect to competing sources of information, such as the role of civilian satellites compared to national reconnaissance satellites. While classified systems typically operate with higher spatial resolution, civilian systems operate within specific limits. Some reconnaissance satellites gather data on natural and environmental resources, which is available to civilian scientists or declassified altogether, thus aiding environmental management and disaster response. Such information is useful to study trends since classified data collection predates civilian Earth-observing systems. Collaborative efforts between intelligence and civilian communities have led to classified data use on precipitation, ocean productivity, the polar ice caps, urban development and permafrost.

Several concerns argue for continuing this valuable collaboration, although against relying exclusively on classified data for understanding and managing natural resources. Public disclosure without the limits of classified data is necessary to justify costs and to demonstrate regulation benefits for protecting and managing the environment when policies impose costs on taxpayers and regulated firms. Studies in environmental and resource management demonstrate the value of public information disclosure in improving compliance by regulated entities and in reducing costs of regulatory enforcement. Another concern is that systems designed primarily for national security goals may not be fully optimized technically, or priority given, for research, measurement and monitoring of the wide range of natural resources. In some cases, the science community’s protocols for replicating results, disclosing technical specifications of data collection instruments and making data publicly available to verify findings may not be satisfied with classified data.

The growth in number of countries deploying Earth-observing systems has led to another concern related to the broad question of “whose information.” Different national systems have led to occasional discrepancies in observations. For instance, measurements of forested land as estimated by U.S. and European satellites differ by 40 percent or more in the forest-rich region from Mexico to Panama. Accurate estimates are necessary to improve measures of the forests’ role in storing carbon in the global climate cycle. Disentangling reasons for this discrepancy is a necessary next step.

A separate, but related, question is how much international cooperation is advantageous in the operation of different nations’ systems? Many Earth-observing satellites are jointly sponsored by countries and involve international teams of collaborators. The Group of Eight (G8) leading industrialized countries asked this question during its summer 2003 meeting and recommended additional collaboration. This led to establishment of the international Group on Earth Observations (GEO), which now includes 80 governments and the European Commission. Participation and funding are voluntary. GEO has established nine priorities in advancing Earth observations use: public health, climate, energy, water, agriculture, ecosystems, weather, disaster management and biodiversity. Much like many international voluntary efforts, GEO strength rests heavily on the participants’ willingness to coordinate and to finance not only their national activities but also to perceive and to realize benefits from collective action.

The need to finance international efforts like GEO, and decisions Congress must face regarding U.S. Earth observations activities, requires metrics for evaluating investment. The 30 years since the Blue Marble captured the world’s fascination have led to an impressive technical capacity to better “see” Earth. A picture may be worth a thousand words, but how much are they worth?

As with any government investment, the question of taxpayer value is a relevant one, particularly in an era of Federal fiscal constraint. Earth observations have opened a unique window on the world for improving scientific understanding, for managing the environment and for saving lives. However, the public won’t spend unlimited amounts of money to collect information for any effort, which is why helping to inform the decision about future investment in Earth-observing satellites is not only an important effort, but also a responsible one. 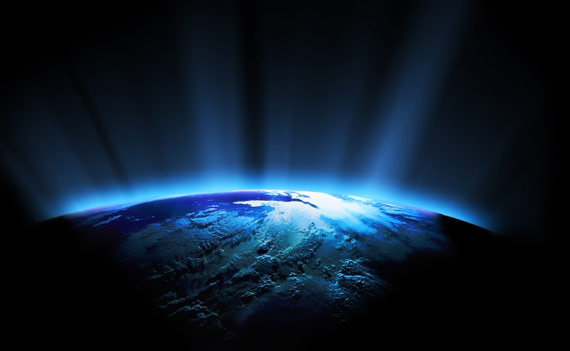