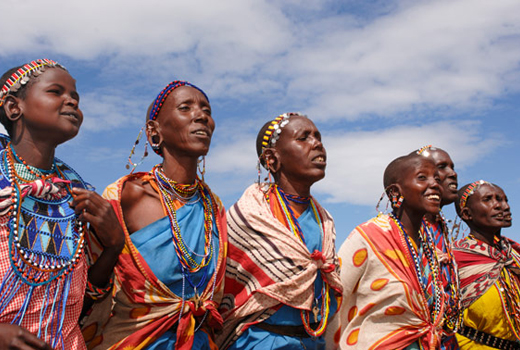 The Millennium Development Goals (MDGs) signed at the United Nations (UN) Millennium Summit in 2000 were formulated to end poverty and greatly reduce social, economic and political inequities in the global arena by 2015. Among the eight goals highlighted in this report, gender equity holds an important position and serves as the focus of the third goal to promote gender equality and to empower women. Other highlighted areas include education, health, HIV/AIDS, environmental sustainability and global partnerships (UNDP, 2010). Indeed, all these themes relate to gender equity and emphasize the importance of women to the development process as a whole.

“Despite the progress that has been made, six out of 10 of the world’s poorest people are still women and girls; less than 16 percent of the world’s parliamentarians are women; two-thirds of all children shut outside the school gates are girls, and women are still systematically subjected to violence.”– United Nations Development Programme (UNDP), 2010

Economic livelihoods at both household and national levels are a key aspect of global development. The inclusion of gender in efforts such as the millennium goals mentioned above highlights how the economic advancement of all members of society directly relates to gender equity. This paper demonstrates how economic contributions of women are both instrumental to and complicated by gendered use of natural resources in livelihood strategies. The discussion is grounded in an empirical analysis of gender and livelihood strategies that depend on natural resources in South Africa’s Limpopo Province. Gender relations and divisions of labor in this region affect use of and access to natural resources in livelihood strategies such as stone crushing, vegetable gardening, fruit processing and pottery making. The socio-spatial context of these activities helps define the gendered nature of economic strategies and, in turn, their reliance on natural resources. This case study draws attention to the importance of a gender analysis in not only defining and implementing development, but also in contextualizing local and community-based efforts to enhance gender equity and empowerment of women.

Development has been an important item on the international agenda of both state and non-governmental organizations for more than five decades. During the initial post-WWII period, organizations such as the United Nations helped define efforts to address global inequality and poverty alleviation. Different approaches to and implementation of global development initiatives range from neo-liberal Western-led development efforts to community-based empowerment projects (Desai and Potter, 2002). 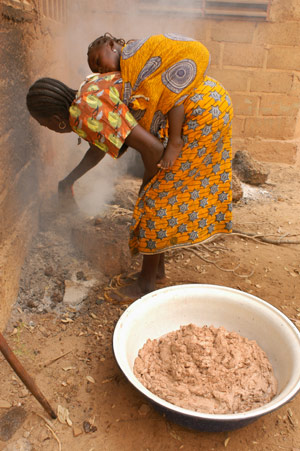 The inclusion of gender as a component of the development process has become increasingly common among many scholars, practitioners and public officials. The UN Decade for Women (1975 to 1985) represents a movement that brought international attention to this development area while achieving mainstream status within organizations such as the U.S. Agency for International Development (USAID), ministries of women throughout the global south and NGOs working in developing regions (Jaquette and Summerfield, 2006).

One of the most important contributions to these discussions was Ester Boserup’s book, Women’s Role in Economic Development (1970), which examined how capitalist development affected women’s work in rural areas of Asia, Latin America and Africa. Similar research during the 1970s and 1980s was part of the Women in Development approach, focusing on integration of women in development project design and implementation. Following these early approaches, analyses offered a more holistic view of the social organizational role and political economic structures that defined development (Razavi and Miller, 1995). The Gender and Development approach, in particular, incorporated gendered relations in its analysis of roles of women and men in the development process.

Finally, increasing attention to the environment expanded gender analysis in the Women, Environment and Development (WED) approach adopted during the 1990s. This perspective is based on sustainable development and emphasizes the intersection of gender, community development and environment. In this approach, women’s roles in agriculture and rural households are seen as pivotal in natural resource management and in efforts to combat market-based economic systems that exploit and destroy natural resources (Mies and Shiva, 1993; Rocheleau et al, 1996).

Efforts to include women and gender in development analyses have given way to numerous critiques and reflections on overall effectiveness of these approaches, particularly in the process of achieving gender equity (Kabeer, 2005). The UN World’s Women 2010 Report (UN, 2010) empirically documents the status of women in areas such as health, education, poverty and political involvement while other scholarship analyzes progress and advancement of women and gender equity on a more conceptual level (Jaquette and Summerfield, 2006).

This paper will critically analyze advancement of women and gender equity through intersection of gendered livelihoods, socio-spatial context of development and environment. Livelihoods entail economic activities, access and assets of individuals, households and communities that contribute to their survival and overall well-being (Francis, 2000). Because livelihoods involve social relations in the household and community, gender plays a role in these economic activities as well as access to and control over resources. In many societies, for example, women cannot own property and their access to capital and other assets is restricted (Sachs, 1997). Thus, livelihoods are gendered and play a role in understanding the economic development of societies and communities.

In addition, the socio-spatial context of these livelihoods provides an important perspective on gender and development. Households, communities and regions highlight different levels of economic activity and thus merit unique analyses. The case study outlined below discusses economic activities that take place at the community level, but also involve household livelihoods and labor. In addition, the spatial context of these activities in rural areas helps define their access to markets, materials used in production, transportation and cultural norms. Rural areas, for example, may be far away from markets where their goods are sold, thus development projects must account for this aspect of local livelihoods.

Finally, raw materials for many of these economic activities are dependent on natural resources such as agriculture, water, fuelwood, clay and other environmental goods. Access to and control over these natural resources is, in turn, affected by gender roles and divisions of labor. In many developing societies, women are denied access to land and control over property that gives them resources to engage in certain livelihoods (Francis, 2000). Additionally, women tend to be disproportionately represented in the informal sector partly because they are marginalized from employment in certain fields, but also due to their household responsibilities and domestic labor. 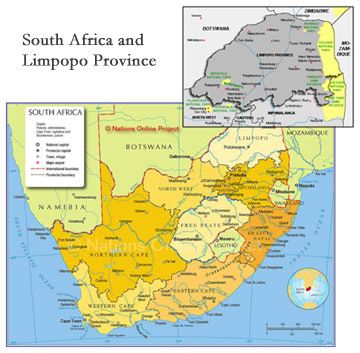 The Limpopo Province is in the northern region of South Africa and borders Botswana, Zimbabwe and Mozambique (Figure 1). The natural landscape of bushveld grassland, indigenous forests and rich farmland is home to the majority Sesotho population. Fruit and nut orchards and cotton are grown on large commercial plantations while vegetables and tobacco are mostly controlled by small, local farmers (Limpopo Provincial Government, 2010). With 5.4 million people, Limpopo has 10.2 percent of the country’s population. Lebowa and Venda, two former homelands from which black Africans were forcibly relocated during the apartheid regime, also lie within this province. Limpopo is considered one of the poorest provinces with poverty and unemployment rates among the country’s highest.

In many rural communities of this province, people depend on a variety of livelihood strategies, ranging from formal waged employment in mining and manufacturing to informal activities such as making textiles, subsistence agriculture, vegetable markets and raising livestock. This study about women’s activities in this rural area draws from fieldwork conducted in South Africa during 2001 and 2002 (McCusker and Oberhauser, 2006; Oberhauser and Pratt, 2004). The project examines how environment and, particularly, natural resource use in economic strategies are gendered. 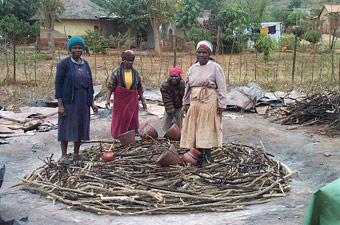 Two groups serve as the focus of this discussion, a pottery cooperative and a garden group. The Mukondeni Pottery Group is a collective with thirteen women that started as a small-scale project, which has since expanded its pottery production in this area. Availability of local natural resources includes: clay, fuelwood and graphite stone, which are bought from local suppliers or gathered by members. Figure 2 shows several group members in the fire circle used to bake clay pots. 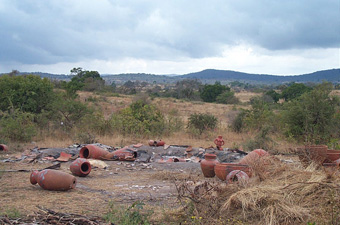 As one woman in the group stated, “Some people sell grass to us. They get wood and grass from the bush. We also gather firewood ourselves if we do not have money.” Both processing of and access to raw materials for this pottery group are dependent on the local environment and natural resources (Figure 3). Gender is also an important component of this economic strategy, influencing both control over and production of pots sold on the market. 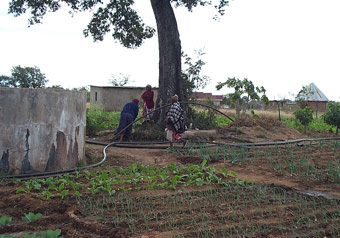 The second example of a community-based collective is the Fulufhelo Community Garden, located near the former homeland of Lebowa. This garden collective is located in a rural area with two hectares of land planted with a variety of vegetables and some grains. The group has established a system of labor that draws on members to collectively plant, hoe, weed, irrigate and cultivate crops. Figure 4 illustrates the irrigation system used for watering their vegetables. The land was given to this group by the local chief – a common practice in many rural areas where land is controlled by the community and its leader, who is often a traditional chief.

Findings from this research illustrate that women play an instrumental role in rural households and community livelihoods. First, women often are excluded not only from formal employment, but also they head households while men migrate to urban areas to work in mines, factories and construction projects. The activities of women are thus vital to rural economies and often depend on available resources and potential. Informal sector activities in agriculture, pottery, livestock and stone crushing are some livelihoods that involve access to natural resources. Second, use of the environment often is dictated by patriarchal norms that deny women equal access to and control over natural resources such as land, energy and raw materials. Therefore, women are faced with unique challenges to economic advancement embedded in gender inequities. Third, many women in these areas engage in collective economic strategies, which benefit everyone because it pools their labor and resources. Without such efforts, many women would not have the same economic or strategic benefits.

As mentioned, development has been an international agenda item for more than fifty years as a way to advance social, economic and political aspects of many developing countries. These efforts have materialized through projects, infrastructure, training and other areas of emphasis that have brought increased attention to global inequities and, in turn, initiatives to reduce poverty and empower marginal populations. Gender plays a crucial role in this discourse, which has been boosted by the Decade for Women as well as greater attention to the status and role of women and gender in society.

This discussion takes a critical look at gender and development initiatives by examining efforts to empower women and advocate for gender equity. In turn, development perspectives provide a unique approach to examine how households and communities provide better understanding of global social and economic processes. This analysis of gender and livelihood strategies in South Africa illustrates the importance of development at household and community scales. The essential role of gender in this process is especially relevant with regard to accessing and controlling natural resources for rural livelihoods. Ultimately, the aim of this approach is to underscore the crucial role of women and gender analyses in combating poverty alleviation and sustainable development as outlined in the UN Millennium Development Goals.