US Army Corps of Engineers: With a Little Help from Our Friends

by Rosemarie Calvert September 17, 2007 Comments Off on US Army Corps of Engineers: With a Little Help from Our Friends  Departments, Knowledge Sharing

Where do most Americans go when they want to visit the great outdoors? The average person may answer “national park” or “national forest.” But, that’s not correct. Believe it or not, most juniors, seniors and families visit one of the U.S. Army Corps of Engineers’ (USACE) more than 450 lakes (www.CorpsLakes.us) and visitor centers nationwide. In fact, the 2,000 USACE Park Rangers meet and greet about 368 million visitors per year.

Because the Corps maintains and manages much of the nation’s waterways, a lake or river is the major centerpiece with boating, fishing and swimming the main recreation activities. To make sure their guests stay safe while having fun, the USACE Park Rangers have adopted an Operation Water Safety public service campaign to encourage the use of personal flotation devices (PFD). According to Steve Austin, senior policy advisor for park ranger activities, “In 90 percent of drownings the victims were not wearing PFDs.” Austin and his fellow Park Rangers are trying to correct this problem with an Internet and onsite education effort, one of which is specifically directed toward hunters and fishermen.

For the younger crowd the Corps’ “Bobber the Dog” (http://bobber.info) works his magic via activity books, online cartoons, printable coloring pages and bilingual activity books. However, for the hard-to-reach adolescent crowd, the Corps has a different agenda that includes the use of eye-catching posters and videos. In particular, the Corps addresses the all-too-common problems of reckless boating and driving while under the influence in a video titled, “The Young and the Reckless.”

For Austin, one of the most rewarding aspects of a Park Ranger’s job is educating visitors and local school children about environmental stewardship. According to USACE Director of Civil Works Major General Don Riley in a May 2007 interview, “Our Visitor Centers are used as a very, very strong education component. Most all of our 38 Districts have a local education program, which is coordinated with the schools.” Nationwide these Districts provide collaborative hands-on environmental education for K-12 students on items such as the local flora, fauna and habitat; interpretive courses; Lewis & Clark expeditionary projects; restoring bald eagle habitats; and Mississippi River courses.

The welfare of the natural world and the education of that world are critical to the Corps’ mission and to General Riley. So when he talks about the environment and sustainability, he also talks about the Corps’ advances in engineering sustainability – building something that will be environmentally sound and sustainable over the years. To accomplish these goals, the USACE employs literally thousands of environmental and ecosystem scientists. Riley continues, “Aquatic ecosystem restoration is one of our 3 major missions.” Flood control and navigation are the other two. 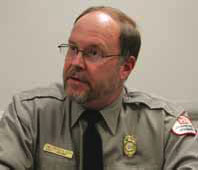 The Louisiana Coastal Protection and Restoration Study (LaCPR) is a prime example of how the USACE is working to create a process of engineering sustainability for its restoration mission through collaboration and knowledge sharing. This $20 million, 2-year effort, begun after Hurricane Katrina, is focused on recommending higher levels of hurricane and storm protection. It looks at the comprehensive, integrated and sustainable restoration alternatives for each area – barrier island restoration, coastal restoration measures, marsh development, levees that could be possible – an inventory of all the different measures that may be put into place. A study of this magnitude normally takes 5 years, but Congress expedited the study. Riley says, “We’re working fast and hard on this. We put an invitation out to all the environmental groups to work collaboratively on this with us.”

According to Riley, the Corps’ collaboration with these groups “is getting stronger and stronger. In the past 5 years that I’ve been in Civil Works, I’ve really seen it blossom. When I first arrived, there were a lot of complaints that we (the Corps) wouldn’t even talk to them. We’re listening to them now, and we’re making progress on our collaboration. We have a limit on our authority; we can do very little that Congress doesn’t specifically authorize and appropriate funds for; but, this collaboration has gone a long way to increase involvement with environmental organizations and to improve our advice to the Administration and to Congress.”

Riley continues, “We also have the Dutch on our team. When the Dutch had that storm in ’53 – the North Sea storm that inundated 1/3 of their country – they invited the Corps to advise them. So we advised them on their project and all those nice, big barriers… we were part of that. But what they found over the years and what they’re finding right now is that they (the barriers) have had a tremendous impact on the ecosystem and the degradation of the waters, flora, fauna and habitat. So they have a billion dollar study that is going back to look at the entire system to see what they can do to restore their ecosystems to a more natural state.

“We’re moving forward in a very, very balanced approach, and it will probably take 20-30 years. Restoring barrier islands and creating marsh takes time. We’ll use adaptive management. Put a little piece in place, and see how it adapts; and, if it works, expand it. If not, adjust it. On the engineering side we call it ‘anticipatory engineering,’ which means engineering a system to operate over the range of possible outcomes rather than building something for a single, particular purpose.”

When asked whether this type of “anticipatory engineering” were new, Riley commented “I’ve heard no one else use this term up to this point.” He continued, “The problem is to get funding for it. Our work is cost-shared, and sponsors have to pay so they may not want it to operate like this. They want their area protected; but we may need this feature in the future. So let’s engineer in a more anticipatory sense and then do adaptive management. Anticipatory engineering is proactive and adaptive management is reactive. I’m trying to get them to think in both terms – to anticipate what you may see as well as to respond to what you do see.

This is part of our new risk discussion with our stakeholders. We used to base all of our plans on national economic development: Did it have an economic benefit that exceeded the cost? And so, when you built the levees in New Orleans, it was based on costs versus benefits. Now we are moving to a risk-based decision framework. This is groundbreaking, prototypical, never been done before in the world. We brought experts in and developed this framework for risk-informed decisions: What’s the risk to population? What’s the risk of choosing the wrong alternative? What’s the risk to the environment if you put something into place? – so you’ll see more and more of our discussions about risk and risk-mitigation as we go forward.”

General Riley continued, “This is really groundbreaking. The risk maps that we’re producing for New Orleans will tell them what their annual risk is. This is the first time this has ever been done, and experts from all over the world have helped to produce this. The challenge we’re facing now is how to communicate this. We’ve got all this great engineering work that would fill up a room, but it has to mean something to the people.

So, we’re working with the community leaders, the mayor’s office, the parish presidents’ offices; it’s only for New Orleans right now. When we first told them, they said ‘We’re trying to get people to come back and invest in the area. Don’t scare them by telling them what their risk is.’ And we said ‘No, we can’t do that. Our responsibility is to inform them. Then let’s figure out how to mitigate their risk.’ We’ve got to inform the public as to what risk they face now and what risk they’ll face after we get the hundred-year protection and how we can mitigate that risk even further through raising your home, flood-proofing your home, clearing the flood plain, moving homes out of there, evacuation plans…”

According to Riley, “there’s been a lot of talk over the years about this but never any funding to do anything about it. So we jumped on it with our IPET report (the Hurricane Katrina Interagency Performance Evaluation Task Force), which is 6,000 pages long. We initially did that as a forensics report, and then we expanded that by saying ’O.K., what do you do with that? What can we improve? What can we do better?’ So we took that $20 million-$30 million and poured it into improved techniques and modeling to really build a sustainable system. We had no idea how much it might cost and thus no idea how long it might take because of that. And then when you talk about restoring an entire coastal ecosystem, that’s a big deal because it’s never been done before. We’ve been looking at the total system – both structural and nonstructural approaches.”

This is part of the Corps’ commitment to the new collaboratively based knowledge of sustainable and holistic engineering. Riley reiterates with unbridled enthusiasm, “I think it’s very exciting because it’s the first time it’s ever been done on this scale before.” Even more exciting is that this methodology has been designed to be used in every state; and, no doubt, its emergence will have a huge impact on the future of engineering.