by Kerry Kriger, Ph.D., SAVE THE FROGS! Founder and Executive Director, and Michael Starkey, Chair of SAVE THE FROGS! Advisory Committee February 16, 2012 Comments Off on Frog Extinctions: An Environmental Crisis  Departments, Knowledge Sharing

Frog populations have been rapidly disappearing worldwide, and nearly one-third of the world’s amphibian species are endangered and on the verge of extinction. Approximately 200 amphibian species have disappeared since 1979 – many from seemingly pristine wilderness areas, such as national parks. Amphibians are currently going extinct several thousand times faster than they should be naturally, which is why this is one of the world’s most serious and overlooked environmental crisis.

Amphibians are important for maintaining balance in the ecosystem, which allows humans to derive many direct benefits from frogs. For instance, adult frogs eat large quantities of insects, including disease vectors transmitting fatal illnesses to humans (e.g. mosquitoes/malaria). They also eat agricultural pests that would destroy crops if their populations were not kept under control. Frogs act as natural pesticides, reducing dependence on potentially harmful chemical pesticides. India and Bangladesh banned exportation of frogs for food in the late 1970s when they realized mosquito populations were increasing as frog populations declined.

Frogs, their tadpoles and eggs also serve as an important food source to a diverse array of predators, including dragonflies, fish, snakes, birds, beetles, centipedes and even monkeys. Thus, the disappearance of frog populations disturbs an intricate food web and results in negative impacts that can cascade through the ecosystem.

Most people in the United States depend on water from a community filtration system, so in these tough economic times it is great to have tadpoles around. They keep waterways clean by feeding on algae, thus reducing costs associated with water filtration.

Amphibians also serve as bio-indicators. Like the proverbial “canary in a coal mine,” amphibians are an early warning system sounding the alarm of environmental degradation. Most amphibians are dependent on both terrestrial and aquatic environments, and they have permeable skin that can easily absorb toxic chemicals. They are also slow to move, making it difficult for them to find a new home if their habitat is destroyed. These traits make frogs especially susceptible to environmental disturbances, which is why the health of frogs may be indicative of the health of the biosphere as a whole.

Amphibians produce a wide array of skin secretions, many of which have significant potential to improve human health through use as pharmaceuticals. Approximately 10 percent of Nobel Prizes in Physiology and Medicine have been awarded to scientists whose research depended on amphibians. 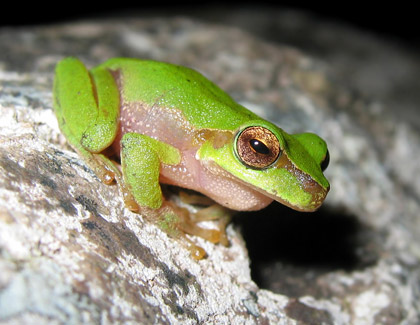 When a frog species disappears so does any promise it holds for human health. Frogs and other amphibians face an array of human-induced threats, and many species are likely to become extinct if people don’t change their behavior. Six major factors negatively affecting amphibians are: habitat destruction, infectious diseases, pollution and pesticides, climate change, invasive species and over-harvesting for pet and food trades. To worsen matters, many of these threats act in concert with one another to create synergistic (magnified) effects. For instance, exposure to a particular pesticide may not normally kill frogs, and a certain disease may only make frogs mildly ill. However, if they become infected by a disease after a pesticide has compromised their immune systems, the population may experience a lethal disease outbreak and be driven to local extinction. And, if a significant portion of the species’ remaining habitat has already been logged, invaded by introduced species or become unusable due to altered rainfall patterns, the species could be on a rapid path toward global extinction.

The rapid disappearance of amphibian populations in recent decades is undoubtedly the most tragic loss of biodiversity ever witnessed and one of the most serious environmental issues. Fixing a problem of this magnitude requires a collaborative effort on the part of scientists, politicians, educators, businesses, members of the media and high-profile personalities, such as actors and musicians. They can quickly influence public opinion and bring an obscure issue (such as amphibian declines) to the forefront of public consciousness. It also requires a concerted effort on the part of average citizens, all of whom have the ability to reduce their environmental impact, to exert an influence on elected officials and businesses they choose to support.

(1) Do not use pesticides. Pesticides and herbicides are toxic chemicals that generally undergo little to no testing on amphibians prior to their approval. Many of the U.S.’s 18,000+ registered pesticides can cause immunosuppression, sexual deformities or even death. Unfortunately, the law of gravity allows pesticides to end up in waterways where amphibians live and breed, thus causing untold damage due to their highly absorbent, permeable skin. Therefore, clean water is not only good for humans but also for wildlife.

(2) Do not eat frog legs. Europeans consumed roughly 120 million frogs per year in the 1990s. The harvesting of amphibians for the food trade is often unregulated, and in many underdeveloped countries, such as Thailand, is likely a primary contributor to amphibian declines. Even in countries where the import/export of endangered species is controlled, virtually no protocols or laws are in place to ensure that diseased amphibians do not get transported. While most of the world’s frog legs come from wild-caught frogs, American Bullfrogs (Rana catesbeiana) are commonly farmed and transported worldwide. 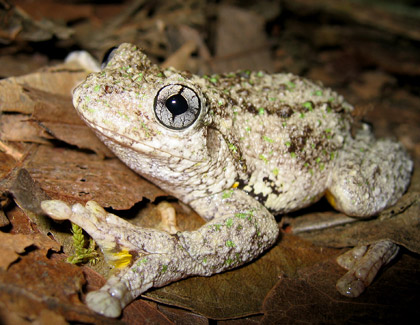 They are known carriers of the amphibian chytrid fungus (Batrachochytrium dendrobatidis) and, thus, are likely primary contributors to global spread of chytridiomycosis, a disease that has decimated amphibian populations worldwide. In a recent study, 62 percent of farm-raised bullfrogs sampled in Los Angeles markets were infected. California imports several million bullfrogs each year, many from farms in Taiwan and China. Bullfrogs are also quite adept at establishing populations in areas where they are introduced. They are large and compete with native amphibians for food and shelter, thus making them a harmful invasive species when outside their natural range (the eastern United States).

(3) Do NOT purchase wild-caught amphibians. Ever wonder where frogs in pet stores come from? Most were taken from their homes in the wilderness. Several million wild-caught amphibians are legally imported into the U.S. each year, and thriving global trade exists as well. The black-market trade – often in legally protected species – compounds the problem. Be part of the solution by not having an amphibian as a pet, or by only buying captive-raised native species.

(4) Slow down driving on wet nights. Frogs and salamanders like to take their time crossing the road . . . give them a break! More than 700 million cars are on the planet, so it is no surprise that roadkill is a significant cause of frog mortality in many urban and suburban areas.

(5) Be like a frog and go green. Humans live on a planet with finite resources and a growing population of 7+ billion people. People need to reduce, re-use and recycle as much as possible in order to conserve natural resources for future generations and to reduce the need for logging, mining and drilling. Water conservation is amphibian conservation, so turn off the tap whenever possible. Use rechargeable batteries; they save money and keep heavy metals out of the environment. Don’t purchase bottled water because production of plastics harms the environment and fuel is wasted to ship bottled water to local stores.

Education is the heart of all environmental conservation efforts. But, currently only a small proportion of society knows that amphibians are disappearing. This lack of awareness is one of the greatest impediments to successful amphibian conservation efforts because most threats could be ameliorated if people were aware of their harmful actions.

Founded in May 2008, SAVE THE FROGS! is America’s first and only public charity dedicated exclusively to amphibian conservation. Its mission is to protect amphibian populations and to promote a society that respects and appreciates nature and wildlife. Its vision is a world in which no amphibian species is threatened with extinction.

Save The Frogs Day is an event whose main purpose is to raise global awareness of amphibian issues, especially in schools and among politicians. It has been officially recognized by Governor Tim Kaine of Virginia, Governor Bev Perdue of North Carolina and Mayor Gregor Robertson of Vancouver, British Columbia. 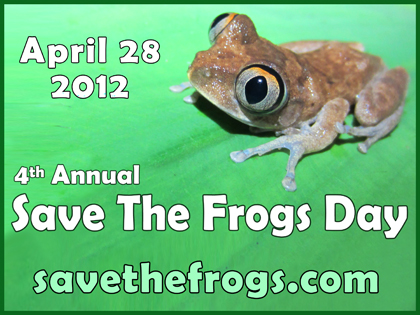 The 3rd Annual Save The Frogs Day (April 29, 2011) was the largest known day of amphibian education and conservation action in the planet’s history with approximately 145 events in 21 countries. Organizers are working hard to ensure the 4th Annual Save The Frogs Day (April 28, 2012) will be even larger. To that end, the organization is calling upon schools, zoos, museums and community groups worldwide to take part and to organize events to educate their local communities or even to build frog ponds.

The SAVE THE FROGS! website (www.savethefrogs.com) contains web pages dedicated specifically to students and teachers with freely downloadable educational materials. The frog poetry and art contests receive entries from thousands of students worldwide each year and provide teachers with an easy way to interest students in amphibians.

Atrazine is one of the world’s most common pesticides. Although the European Union banned it in 2004, more than 80 million pounds were used on American crops in 2011, and it is still used in 60 countries. This harmful pesticide is an endocrine disruptor that can turn male frogs into females at concentrations as low as 2.5 parts per billion. During the 3rd Annual Save The Frogs Day, volunteers held a rally in front of the U.S. Environmental Protection Agency (EPA) building to call for a Federal ban on use and production of Atrazine. One week later, organizers delivered to the EPA more than 10,000 petition signatures in support of the ban, which the Agency is now considering. SAVE THE FROGS! plans to continue raising awareness of Atrazine because it feels that once people know about its harmful effects, they will no longer allow the pesticide in their water supply or on their corn!

Of particular concern to California’s environmental conservation efforts is the importation of several million live American Bullfrogs (Rana catesbeiana) each year for use in food and pet trades. As mentioned, Bullfrogs are native to eastern North America but have established populations throughout California. They cause massive ecological damage due to their voracious appetites for native wildlife, their propensity to spread deadly diseases and their role as competitors with native amphibians for limited food resources. Bullfrogs are listed on the IUCN’s list of 100 worst invasive species. SAVE THE FROGS! has initiated a petition to California Governor Jerry Brown calling for a statewide ban on the importation, sale, release and possession of American Bullfrogs. Santa Cruz County (location headquarters for SAVE THE FROGS!) will soon become the first county in the United States to ban these voracious native wildlife predators.

Remember catching your first frog as a child? Our grandchildren may lose that opportunity without your assistance in maintaining a livable habitat. Please visit www.savethefrogs.com to learn more about SAVE THE FROGS! and how to help. 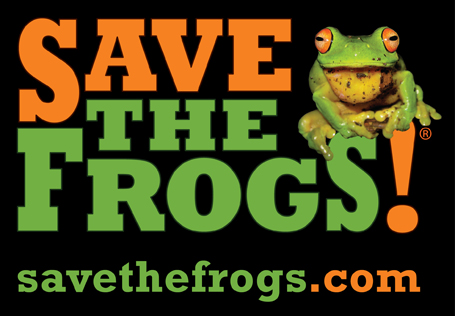 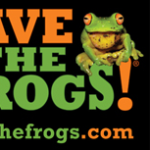 Ph.D., SAVE THE FROGS! Founder and Executive Director

kerry@savethefrogs.com
Kerry Kriger has given presentations on amphibian conservation in Australia, Brazil, Canada, Ghana, New Zealand, Panama, South Korea and the United States. He is a recognized expert on the amphibian disease chytridiomycosis, a topic on which he has published 15 articles in peer-reviewed international scientific journals. Kriger’s research into amphibian declines has been supported by the National Geographic Society and various philanthropic organizations throughout the world. He recently spoke on the amphibian extinction crisis at the National Geographic Society, Smithsonian Tropical Research Institute, U.S. Environmental Protection Agency and U.S. Fish and Wildlife Service. Kriger holds a Ph.D. in Environmental Science from Griffith University in Gold Coast, Australia, and can be reached by email at kerry@savethefrogs.com or by phone at 831-621-6215.