Guatemala’s Quebrada Seca is one of the most remote areas on the globe, which is why local Mayans are very wary of outsiders and strangers. This includes five Americans from Team 5 Medical Foundation (T5), who were preparing for a medical mission to the area. However, within 24 hours of T5’s aircraft landing in Guatemala, a record magnitude 7.5 earthquake had devastated both people and structures in San Marcos. This led to a last minute, unplanned redeployment to treat 125 disaster victims.

Imagine three T5 members, wearing military gear head-to-toe donated by Arc’teryx LEAF, leaving Las Vegas to connect through Houston and then on to Honduras. From Honduras, the group had planned to take a 5-hour bus ride across two borders to Lake Izabel, Guatemala. Instead, T5 received a phone call from Medical Missions Foundation telling them that Guatemala’s First Lady of Labor was requesting assistance at the earthquake site. What would be the possibility of diverting to the devastated area?

Team 5 was heading to the east side of Guatemala and San Marcos was in the far west. To put this into perspective, this diversion would be like a flight from New York to California. Decisions had to be made quickly by the three T5 members who had already arrived in-country as the final two team members were still in-flight with no clue to the request. Within 10 minutes a decision was made that the request was doable, but the challenge was to get the airline on board.

While waiting for T5 medical director Christine Dube, MD, I walked to United’s customer service counter and just threw it out there: “Have you seen the news on the earthquake in Guatemala?” The United supervisor said, “Yes,” so I showed her the email requesting T5 to deploy to San Marcos for medical disaster relief. Fifteen minutes and a lot of keyboard clicking later, all five tickets were changed with T5 set to depart to Guatemala City in less than three hours. I then called our contact with the First Lady and Guatemala’s social services, and said, “I hope you have your end covered because our tickets are changed, and we’re on our way to grab a few more duffel bags of supplies.”

It was wild because most people would be asking questions like “Where are we sleeping?”, “Where are we showering?”, and “What about food, the bus and security?”. But T5 is comprised of three Special Forces members and two ultra-athletes who understand that the locations T5 goes to are locations yet to be reached. Therefore, the gear was already comprised of snugpak sleeping bags, tents, NDUR filtration water systems, Arc’teryx LEAF backpacks, kneepads and three layers of military clothing and shells. In a nutshell, T5 was prepared.

Customs was called; a private bus large enough for T5 and its gear would be waiting; a room was being prepared at the Red Cross station, and food would be provided at the end of the 5-6 hour drive. This was all the information provided, and the Team just rolled with it. Dube landed, understood that a change of plans was taking everyone to the San Marcos earthquake, and her response was, “Cool.” 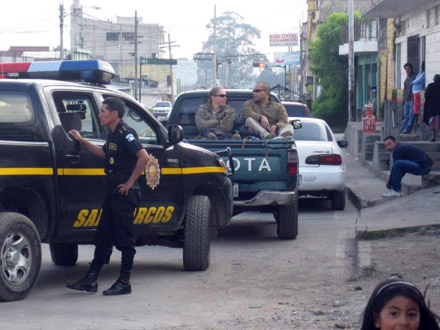 T5 filled two pickup trucks with 10 snugpak duffel bags, 30 pounds each of personal gear for the 10-day deployment, medical supplies and gear. Each person also had an Arc’teryx daypack stuffed to the max. It was late, dark and November cold as all five members rolled up to United’s check-in counter with two full valet carts of gear. The United supervisor, who assisted us earlier, was present with a smile on her face. She understood that sometimes rules need to be bent as she never charged T5 for the $1500 in change fees. She even stayed late to make sure T5 had a VIP check in, which was amazing. Many thanks go out to this woman with a heart of gold.

One minute T5 was sitting at Las Vegas’ McCarran airport in their coyote-colored gear, packs and camo magnum boots. Eight hours later they landed at 7 a.m. in one of the most dangerous cities in Central America, Guatemala City, with 10 duffel bags filled with $100,000 in medication and $25,000 in gear. Standing at the immigration and customs line, T5 was greeted by a customs agent, customs forms and the 10 questions every visitor normally has to check “no” to.

Since the country contact was nowhere in sight, I sent my team through customs and instructed them to go outside with just their daypacks to try to find the social services contact. This was critical because foreign visitors can go to jail for bringing medications into a country. Meanwhile, I checked the “yes” boxes on the customs form in response to “Do you have more than $10,000 in cash and pharmaceuticals?”. Then I pushed T5’s 10 duffle bags to an x-ray machine. As I started to throw the 50-pound bags onto the conveyer belt, I handed the customs declaration to the officer and watched her do a double-take as she saw all boxes on the customs form checked “yes.”

Luckily our Guatemalan social services contact arrived and, after a few minutes of chatter with the customs officer, the officer said, “Thank you for helping our people.” Then she approved the T5 gear without any customs fees or delays. The duffle bags were packed on the bus, and the bus started moving immediately since it wasn’t safe with all that gear. Eight hours later, T5 rolled up to San Marcos and saw the earthquake devastation with mudslides, fallen trees and rubble from adobe homes. The bus moved slowly; cars jammed up, and roads were closed from the earthquake.

T5 pulled up to a Red Cross sign on the wall, which was outside a military building turned safe zone for those who had lost their homes. The duffle bags were dragged up three flights of stairs to a single 15×15 cement room with a stack of old army cots and junk piled high. It was an old storage room. After emptying it, cots were set up. T5 members received a quick brief after their 18-hour trip, grabbed their sleeping bags, took a quick, cold shower and hit the sack. It would be an early morning followed by a long day as the remote healthcare workers were expected to treat about 125 patients.

Morning came quickly. T5 grabbed its gear, headed outside to the cool air and sounds of Spanish, and into a few beat-up, pick-up trucks. After tying down the gear in the back of the trucks, they headed to the command post. Upon arrival, a warm breakfast of beans, plantains and coffee waited. T5, heading the clinic for the day, traveled a short distance and turned a broken down building into a make-shift clinic.

A local doctor teamed-up to help as T5 always works with individual teams of one female and one male practitioner. Three make-shift healthcare stations were devised, lines formed and corridors flooded with a sea of people. The remote medical practitioners treated everything from inhalation of debris and dust to broken bones, lacerations and eye injuries. When lines thinned, T5 began to see sick patients so they turned the work area from triage center to medical clinic. At day’s end, 125 patients were cared for using two duffel bags of supplies and medications. 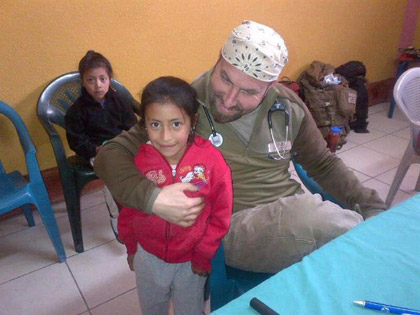 Afterwards, the local search and rescue team wanted to split-up T5 – some going south with the remainder going east to look for injured. Unfortunately for them, T5 is a single team, meaning team integrity is paramount. Since T5 members are volunteers, priority is given to making sure each person arrives home and uninjured from the mission. Splitting-up the team to head into unknown areas without communication, coupled with lack of information about people possibly injured or roads possibly closed, was an unnecessary risk. Calculated risks in austere and remote locations are one thing, but heading to spots pointed on a map without air support, military assistance and proper tools is foolish.

The following day, with all the injured cared for, T5 set out for the two-day long drive to its original deployment. I-Pods on and feet up, the practitioners were comfortable in the mini-bus for the long ride. The first night was spent at the First Lady’s B&B in Antigua. From there, it was another eight hour ride on dangerous, curvy and wet roads to Lake Izabel, where T5 was met by its boat ride from the “Finca.”

It was rainy season so it was coming down hard. The Team geared up for the boats, transferred the gear and left for its two-hour boat ride to jungle huts. For these remote practitioners, “Finca” is paradise with its wooden huts, Argentinian food, a lake to swim and kayak in, and lukewarm beer to drink while laying in a hammock with no connection to the outside world. After dinner it was all business as T5 sorted and broke down its personal and medical gear, and prepared for its healthcare mission.

Throughout the next seven days, the Team taught local practitioners how to suture, staple and give care. T5 also treated more than 600 patients, completed one dozen outpatient surgical procedures, cared for newborns and treated malaria and worms. This occurred in five villages throughout thousands of square miles, which were covered by hours of trekking by foot. This is what T5 is all about – bringing skills to those who can absorb them, practicing what each member has learned and putting their knowledge to good use. This is followed by a donation of three duffel bags of medication and supplies valued at thousands of dollars, which keeps the locals self-sufficient for months.

T5 believes local education paired with hands-on experience in the on-the-job portion of its deployments, coupled with gear and supplies to make it a package deal, makes the mission all come together for those living in remote areas. Team members dedicate themselves to overlooked, too hard to reach places or places with political tension. Although each remote healthcare practitioner understands the personal risks he or she takes, and all have families waiting at home for them, every team member keeps returning to these regions. Where most remote medical foundations only scratch the surface, T5 leaves a dent behind because each member is a dedicated and highly trained Special Forces and/or survival expert. This is what makes T5 one of a kind.

T5 would like to thank Guatemala’s First Lady of Labor as well as the country’s social services personnel who assisted this deployment in every way. Medical Missions Foundation connected the dots, and United Aid Foundation sponsored the cost of the diversion to the earthquake. Team 5 is funded solely by donations. So, if anyone knows of a remote location that has been overlooked, please help with funding so T5 can go there. T5 has no religious or political standing; each member is a dedicated participant because it’s the right thing to do. 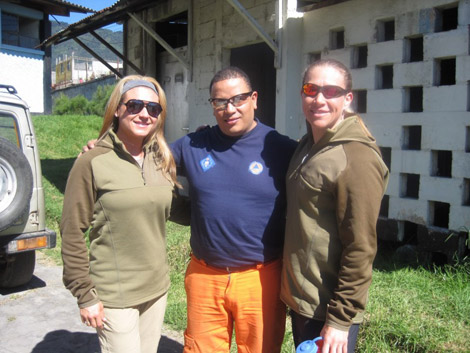