The United States Navy faces significant challenges with volatile and rising energy costs as well as with the security of its energy supplies. In 2009, Secretary of the Navy (SECNAV) Ray Mabus set goals to create a “Green Strike Group” by 2012, to deploy that strike group by 2016 and, by 2020, to use alternative sources for at least 50 percent of the Navy’s total energy consumption. Subsequently, the Chief of Naval Operations (CNO) established a goal to reduce tactical energy use 15 percent by 2020. In response, the Naval Sea Systems Command (NAVSEA), in partnership with the Office of the Chief of Naval Operations (OPNAV) and the Fleet, is exploring and implementing initiatives to reduce energy consumption of the U.S. Fleet.

United States Navy ships consumed 10.1 million barrels of fuel in 2008. If no action is taken, the Navy’s Task Force Energy projects an increase of 20 to 25 percent by 2020 due to introduction of several new ships to the Fleet and increasing energy demand for new capabilities, along with a corresponding increase in operating hours. Consequently, to achieve SECNAV’s and CNO’s goals, the Navy must implement changes both to counter the anticipated growth and to realize further reductions.

No single technology will enable the Navy to achieve its goals; instead, a collection of technologies must be developed and fielded synergistically. The opportunity for energy savings is evident because most of the energy content in fuel becomes waste heat, which is transferred either to ambient air or to sea water. Major sources of energy loss include: prime movers (typically gas turbines and diesel engines), drag on the ship’s hull and inefficiency of the propeller. Other shipboard equipment, such as pumps and electronics, contribute to energy losses to a lesser extent. The manner in which ships operate also has a significant impact on fuel consumption.
Gas Turbines
To improve efficiency of its many gas turbine engines, the U.S. Navy is currently investigating the values of modifying internal components, such as optimizing bleed air operation and modifying fuel scheduling. Fleet implementation of an automated online water wash capability will begin in 2012. And, the Navy is developing advanced generator sets utilizing modern twin-spool gas turbines for significant fuel savings (10 to 15 percent) beyond existing generator sets.

Instead of using gas turbines, which are less efficient at lower speeds, the ship will be able to use HED for roughly 75 percent of the time underway. Over U.S.S. MAKIN ISLAND’s 40-year service life, the Navy expects to save more than $250 million. The LHA 6 class will use this same HED system.

Hybrid Electric Drive2
The Navy is currently testing a prototype HED system for destroyers. If successful, production systems are planned to be at sea by 2016.

Energy Storage Module
Naval ships typically operate with at least two electrical generator sets online to ensure power reliability. In many cases, the total electric load can be supplied by a single generator set, thus resulting in inefficiently lightly loading the two online generator sets. An energy storage module – essentially a large uninterruptible power supply (UPS) – enables more efficient single generator operation by providing a reliable source of backup power. The Navy plans to test a prototype on a destroyer by 2012. If successful, production systems are planned to be at sea by 2016.

Stern Flaps
Stern flaps modify the flow of water under the hull to reduce hull resistance and thereby improve fuel efficiency. Within the past ten years, the Navy aggressively installed stern flaps on surface combatants with a fuel savings of about 4 percent. The Navy is now planning on installing stern flaps on amphibious warfare ships.

Hull and Propeller Coatings
A fouled hull can reduce fuel efficiency by 5 to 12 percent. Historically, divers periodically inspected a ship’s hull to determine if cleaning was warranted. Recently developed commercial hull coatings are extremely smooth, offer less resistance when new and are resistant to fouling. Marine growth that manages to adhere usually washes away as the ship transits at its cruise speed. Commercial ships have experienced fuel consumption reduction on the order of 9 percent.

In 2009, the Navy began a demonstration of a fouling release coating on U.S.S. PORT ROYAL (CG 73) and U.S.S. COLE (DDG 67). To evaluate the effectiveness of the coating by monitoring power and speed, the Navy installed metering systems on these ships and two control ships with traditional bottom paint. The Navy has also regularly inspected the underwater hull of the test and control ships to document fouling and to correlate the fouling to metering system data.

Results of this evaluation will help the Navy decide whether to more widely use these commercial coatings. Underwater inspections have verified significant sloughing of fouling during transits to and from Europe. Initial cost and a potentially long payback period is the major impediment to wide adoption. Overall, the total job cost premium, including labor, for the advanced coating is about 12 percent for cruisers and 15 percent for destroyers.

Recent successes in improving propeller efficiency of commercial ships by using the same coating systems on the propellers led to Navy testing on U.S.S. GUNSTON HALL (LSD 44). Following completion of testing and verification of return-on-investment, the U.S. Navy expects to make a decision on fleet-wide implementation. 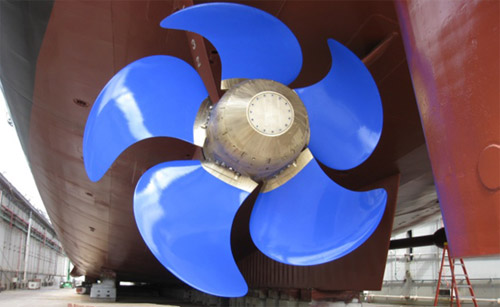 Advanced Solid State Lighting
Advanced Solid State Lighting uses Light Emitting Diodes (LED) to replace conventional fluorescent and incandescent lights. LEDs require less than 20 percent of the power of an equivalent incandescent bulb and last roughly 100 times or more as long. Compared to fluorescent lights, LEDs are 50 percent more energy efficient, last about seven to 10 times as long and are not considered hazardous waste. With time, the cost and efficiency of LED lighting is expected to improve. The Navy is conducting shipboard tests to quantify actual savings. Test results will inform the Navy as to the specific economic conditions where it makes sense to more widely retrofit ships with LED lights beginning in 2012.

Bulbous Bows
Bulbous bows have traditionally been used for ships that mostly operate near their design speed by creating a wave that cancels the ship’s bow wave and reduces resistance by up to 15 percent. More recently, advances in computational fluid dynamics have enabled bulbous bows providing good performance off of design speed.

While many surface combatants have large sonar domes mounted on the bow, these domes are not specifically designed to reduce drag. Tow tank testing of the addition of a second bulb on a destroyer model predicts an estimated 4 percent fuel consumption reduction. The Navy is evaluating whether to install this type of bulb on its destroyers.

Variable Speed Drives and High Efficiency Motors
The existing Port Use Fans (PUF) on amphibious assault ships are unreliable, thus forcing the ship’s crew to use the Forced Draft Boilers while steaming in-port. The Navy is exploring replacing the existing PUF with a new one that employs a Variable Speed Drive (VSD). The upgraded PUF is anticipated to achieve a 30 percent fuel savings.

The Navy is also investigating VSDs to upgrade the Collective Protection System on destroyers to achieve an estimated fuel savings of 3.5 percent.

I-ENCON
The quickest and most effective way to obtain fuel consumption reductions is by operational changes implemented through training or technological changes aboard ship or ashore. In the 1990s, the U.S. Navy implemented an Incentivized Energy Conservation (i-ENCON) program that reviews with ship crews operational/ procedural modification strategies and techniques for reducing energy consumption. The i-ENCON program offers monetary and prestigious recognition awards to the most fuel efficient ships. Award money is deposited into the commanding officer’s discretionary funds, which are often used to buy items like damage control gear or to augment the ship’s welfare and recreation programs.

Shipboard Energy Dashboard (SED)
A ship’s crew does not currently have a direct way to evaluate how energy is consumed. The Shipboard Energy Dashboard integrates with the existing Integrated Condition Assessment Systems (ICAS) and new sensors, as necessary, to provide recommendations needed to minimize energy consumption while still meeting system performance and reliability requirements. To begin, the program will be measuring propulsion gas turbine, gas turbine generator and AC plant energy consumption.

A Shipboard Energy Dashboard proof of concept is installed and fully functioning in USS JAMES E. WILLIAMS. Another six ships are planned in late 2011/early 2012 to continue maturing the dashboard with the intention of installing it in all DDG-51 Flight 2A ships by the end of 2012.

A Green Navy
Through the systematic evaluation and engineering of these and other initiatives, the United States Navy will achieve its ambitious energy goals. A “green” Navy is critical both to reduce fuel costs and to reduce the vulnerability of supply lines.

For more information on the Navy’s energy initiatives see the Department of the Navy Task Force Energy page on Facebook at http://www.facebook.com/NavalEnergy. 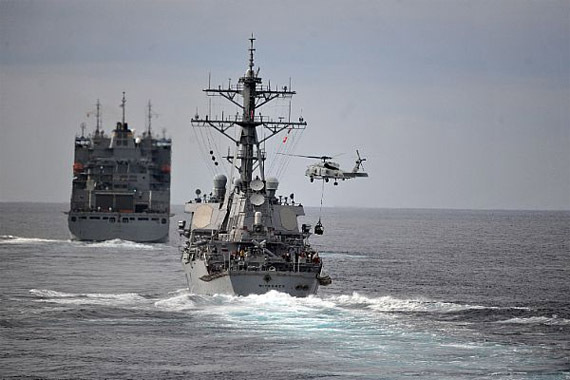