My work at the Air Force Research Lab (AFRL) is centered on using different types of biomass for energy. Our focus is on converting algae to energy, which involves taking different strains, seeing how they grow in various conditions and working to increase their energy output. Most researchers are looking at lipid production for biodiesel, but we’re concentrating on electricity production – using biomass in ways similar to waste to energy.

We’ve actually found strains of algae that grow well in cold, as well as others that handle the heat and high sunlight very well. Our research also includes working on different technologies to extract algae from water. Water evaporation significantly reduces energy return, so we’re working on chemical and physical extraction methods. This includes using electricity to cause algae to separate from the water. So far, we’ve had pretty good results. We also work on ways to thermally and chemically convert algae into a useful source of electricity. AFRL cares about electrons flowing – how to combust things so we can turn an engine of some kind. Even with respect to generators, we need to find a way to make the fuel source more efficient – to make a higher quality fuel so our deployed Airmen can do more with less fuel.

AFRL has a number of energy programs. My lab focuses on deployed energy – how to make it more effective for the guys overseas who must have diesel and jet fuel trucked in. We also work on ways to reduce fuel demand since most casualties come from guarding and shipping fuel from one point to another. If we reduce the number of trucks on the road, then we reduce the guarding requirement. This will decrease casualties while allowing our guys to do other things. 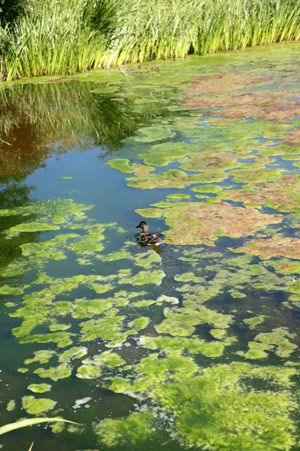 We also focus on how to use energy in fixed installations within the US, as well as how to put additional energy onto the national power grid. As such, our work has commercial and consumer applications. Our partners, which include industry and spin-off companies from universities, help provide a more realistic look at what might be beneficial for commercial application. Obviously, no one’s going to build what we’re working on if they can’t make any money on it. So, we’re looking at building useful systems that can do some good, but that will also turn a profit for private industry.

Algae has a very big advantage over fuel crops such as camelina, corn, switchgrass or anything similar because it can be harvested more than twice per year. In fact, it can be harvested on a daily basis. The doubling time is usually a few hours, which allows me to take a small population and turn it into a much larger population in a relatively short period of time. And, due to their genetic make-up, algae have very high lipid content. These fatty sources are a great energy source because they’re very high in calories. In addition, algae can grow naturally almost anywhere. All you need is a hole in the ground with some water in it, sunlight and a fertilized medium containing nitrogen and phosphorus for high growth rates. Conversely, most food crops need fertile soil to grow and a much larger investment in capital equipment for harvesting. Algae can be harvested in one location by bringing it to you – just by pumping it around your pond.

Algae can be an all-purpose energy solution since its properties are equal to oil and petroleum, which is fossilized algae and other biomass that’s been around for a few million years. The difference is that we can grow this biomass today and artificially speed its conversion into petroleum. In essence, algae is just a hydrocarbon chain that we can create whatever we want from it – gasoline, diesel, jet fuel or just turn it into straight electricity. As a hydrocarbon, it can be used similarly to any other hydrocarbon. For instance, there are technologies that can convert biomass into bioplastics, which look exactly like regular plastic. You wouldn’t know the difference. Bioplastic can be a direct replacement for petroleum plastic that’s all over the world today – from water bottles to cars, just about anything. Because it’s a biological polymer, anything made from bioplastic would be 100 percent recyclable, which means, for instance, that you can build a car and then completely recycle it. In fact, I think that’s already been done in South America.

We could, theoretically, replace everything we do with petroleum with algae. Whether it’s practical remains to be seen because no one’s done it. One research report says that we would require about 10 million acres of algae to produce, theoretically, all the transportation fuel we need in this country. And, ten million acres is only about one percent of the land we currently use for crops, which means it wouldn’t impact food supply. So, it’s possible, but something on that scale would be enormous. 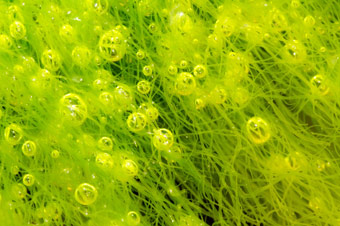 More and more people are beginning to understand that algae and other biomass are a very viable source for energy production. And, they’re getting very excited. I think we’ll see a mass production, mass use trend sometime in the future, especially since there seems to be a big industrial push to have a huge algae production capability. Hopefully within five to 10 years we’ll have some mass use. But today, it still needs quite a bit of work with several challenges that need to be overcome. And, continued investment needs to be made. With this in mind, and within the five to 10 year time frame, algae should provide a lot of energy availability for this country.

In addition, algae have limited environmental ramifications because everything that comes out of it is biodegradable since it’s a biological source. However, many chemicals currently used to make biodiesel can be harmful, like methanol and alcohol. But, the good news is that these chemicals can be replaced with more environmentally friendly substances and processes. In addition, the byproduct of growing algae is oxygen. They intake CO2, grow from it and then produce oxygen as a byproduct. And, algae doesn’t compete for potable water use or availability because they can use wastewater. As a matter of fact, algae have a very good ability to clean up nitrates and phosphates in water. For instance, wastewater from treatment plants sometimes still contains trace amounts of these chemicals. So, treatment plants often use algae to clean-up those chemicals further. This allows the water to be pumped back into the river with no decrease in quality.

If all the chips fall in the right place, algae could be a very good game changer. It could be a wonderful solution for underdeveloped or resource poor nations. As an example, Israel has power plants where they’re growing algae in addition to the energy source they currently use. They’re actually pumping the CO2 out of their exhaust stacks to feed their algae so they can get more mass to supplement their energy use. This allows them to burn less coal and oil. They can grow some of their own fuel and just burn that again. No one that I’m aware of, industrially or commercially, is doing anything similar in the US. And, I’m not sure why not. Maybe Israel just had the right person who took the right initiative to make a difference. It seems that our country hasn’t found that person yet.