America’s trash is made up of things people commonly use and then throw away, such as paper, plastic, cardboard packaging, food, furniture, appliances and grass clippings. According to the U.S. Environmental Protection Agency (EPA), “In 2010 the United States generated about 250 million tons of trash and recycled and composted more than 85 million tons of this material. On average, Americans recycled and composted 1.51 pounds out of their individual waste generation of 4.43 pounds per person per day.” Although municipal solid waste (MSW) has increased per person by .77 pounds from 1980 to 2010, it has been accompanied by an increase in recycling of 24 percent during this same time period. In addition, landfill waste disposal has decreased from 89 percent in 1980 to 54 percent in 2010. Recycling 85 million tons of MSW is equivalent to reducing greenhouse gas emissions from more than 36 million passenger vehicles per year and saving more than 1.3 quadrillion Btu of energy, the equivalent of 229 million barrels of oil, according to the EPA.

Although the environmental benefits of recycling are well-known, what is less known are the economic benefits. Recycling creates jobs, builds a more competitive national manufacturing base and adds to the economy. According to a 2006 South Carolina Department of Health and Environmental Control (DHEC) study, “The South Carolina recycling industry has a $6.5 billion impact on the state’s economy” through the generation of “more than 15,000 jobs, $1.5 billion in annual personal income and $69 million in tax revenue each year.” The study also estimated a state annual growth of 12 percent per year with an economic impact of more than $11 billion by 2012. In other words, one man’s junk is another man’s gold – or kingdom in the case of Junk King, a California-based green hauling and recycling company.

“. . . the cost of moving more than 1.3 billion tons of trash per year is onerous. It costs $205 billion+ yearly to deal with the world’s debris. . .”
Junk King is making its mark on the industry by recycling up to 60 percent or more of what it hauls, and that figure is not for a single franchise. The company doesn’t pick out the best location and brag about its record. Junk King has a company-wide policy to either recycle or donate as much as possible of what it hauls.

Junk King was born in 2005 as a green junk removal company dedicated to hauling material in a responsible fashion. The employees say that’s not always easy, but what’s good for the environment is good for everyone. Before this type of socially responsible thinking, most junk haulers dumped their entire loads into landfills. Of the numerous and sometimes daunting environmental problems facing the world, Junk King feels it’s important to do its part to help make the planet a cleaner and safer place. Storing recyclables in a warehouse costs more and is more of a hassle, but the company and its employees believe the Earth is worth the extra effort. They believe everyone has a responsibility to do what they can to make a difference.

Most businesses nowadays are looking for incentives to recycle. The Junk King founders saw an opportunity in this trend to earn more through recovery and recycling. The green practice not only offsets expenses but also adds a secondary revenue stream. Approximately 180 tons (360,000 lbs.) of metal is recycled each year at the company’s San Carlos, Calif., home office alone. The company has 40+ franchises nationwide with more on the way.

How does the system work? Each Junk King franchise has a warehouse set up for recycling. Items to recycle or donate get stored until a third-party partner is ready to pick them up. Metals, paper and even e-waste are obvious choices for recycling. But the company doesn’t stop there. For instance, Junk King works with an outfit called 7th Generation that recycles household items like clothing, dishware, toys, shoes, towels, books, textiles and even unbroken knick-knacks. When business customers voiced a concern about the confidentiality of documents they discarded, Junk King contracted with Shred It document shredders – problem solved. The less that goes into the landfills, the better it is for the Earth and the lower the dumping costs. It’s a win-win. 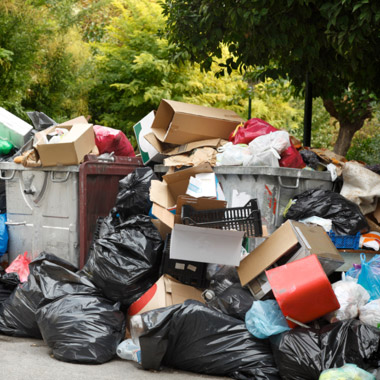 Still, despite such efforts, the garbage crisis worldwide is a potential disaster in the making. While some argue that landfill space is plentiful, the cost of moving more than 1.3 billion tons of trash per year is onerous. It costs $205 billion+ yearly to deal with the world’s debris, and that cost is rising rapidly. Even if people could fill all the open areas with unsightly, unhealthy piles of garbage, many third world countries are unable to fund proper waste management. Take one example of the monumental task at hand. Thirty billion single-use plastic bottles are discarded every year – not recycled but discarded. Many of these end up in landfills. Others end up in the ocean. Junk King thinks this is unacceptable.

Recycling metals, paper, plastics and proper disposal of E-waste – all these efforts add up. Recycling and donation of items create an environmental snowball effect for the good of the planet. Remember, many of the loads Junk King picks up have already been culled through for recyclables, which means the company gets the leftovers. America recycles an average of 32.5 percent of household waste while Junk King recycles or donates up to 60 percent of what they haul. The latter figure is way above the U.S. average for a bunch of “stuff” that would otherwise end up piling higher and higher, eventually blighting the landscape. Imagine the problems of urban blight and pollution in the Third World where laws to protect the environment are few and resources to alleviate existing problems are often non-existent.

As previously mentioned, recycling not only saves room in landfills, it conserves energy and resources. Production of that single-use plastic bottle requires one-third of the bottle’s volume of oil – gallon bottle – one-third gallon of oil to manufacture, transport and store the bottle. Recycling a single aluminum container saves enough energy to operate a television for three hours! And, improper disposal of e-waste contaminates the soil with materials like lead, cadmium or beryllium. In addition, e-waste shipped off to third world countries puts the foreign population and environment at risk. Reusable items that Junk King donates to charity don’t have to be remanufactured, which means the benefits are immense.

“Junk King guys and gals realize they’re not in a position to save the world by themselves, but if everyone worked at it as hard as they do, well, it couldn’t hurt.”
Modern society is wasteful. Usable and recyclable items are discarded daily. Even brand-new items are discarded. There is a degree of comfort for the customer in getting rid of items properly. Junk King saw the problem, and many clients use the hauler because of its policies regarding recycling and donating. The problem of too much junk disappears, but the customer derives a certain satisfaction knowing that his/her usable items won’t go to waste or end up on the side of the road adding to the already considerable mess.

Junk King also creates green jobs. The sexier, green-job positions might be “environmental resource engineer – wildlife management,” but these jobs are few and far between. “Green junk hauler” may not have the cachet of other positions, yet Junk King provides entry-level, customer care and management jobs. Recycling takes a lot of effort and resources, but overall, there’s a savings of energy and manpower and a positive impact for the environment.

Junk King guys and gals realize they’re not in a position to save the world by themselves, but if everyone worked at it as hard as they do, well, it couldn’t hurt. The more the company grows, the more they recycle. Junk King’s success pays dividends for the environment, and the company is willing to share its success for a greener, safer and healthier planet.