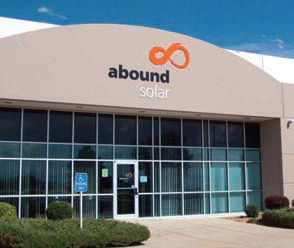 AColorado State University mechanical engineering professor was conducting research for Anheuser-Busch in the late 1980s when an epiphany hit: Could he borrow the efficiencies of making aluminum cans on a mass scale and use them to make solar panels? In 1991 Professor W.S. Sampath began to investigate his ideas for low-cost photovoltaic solutions by focusing upon a thin-film cadmium telluride glass coating in his small Colorado State laboratory. Another 16 years would pass before he started a company, AVA Solar, to commercialize this technology.

The spinoff, now called Abound Solar, formed in 2007 with support from the National Renewable Energy Laboratory in Golden, Colo. By 2008 the new company had attracted $104 million in venture capital – more than any other Colorado firm that year. To date, Abound has raised $150 million from private investors and institutions, including Invus Group, DCM, Bohemian Companies, Technology Partners and GLG Partners. Abound is now ramping up production to make low-cost, thin-film photovoltaic solar panels at its new factory in Longmont, Colo., and expects to begin shipping by the end of 2009. The company has gone from 40 jobs a year ago to 200.

“It’s a long road we’re taking. In a space of 10 years, these modules may produce three times more energy that can be converted to electricity, and that will reduce the cost. I’m not saying this is going to happen next month. We’re just starting out on this road,” said Sampath.

At capacity, Abound Solar is expected to churn out 200 megawatts of solar modules annually by using continuous in-line semiconductor equipment that converts sheets of glass into solar panels. Abound uses proprietary manufacturing technology to produce solar modules at half the cost of crystalline silicon, the mainstream technology for photovoltaics. 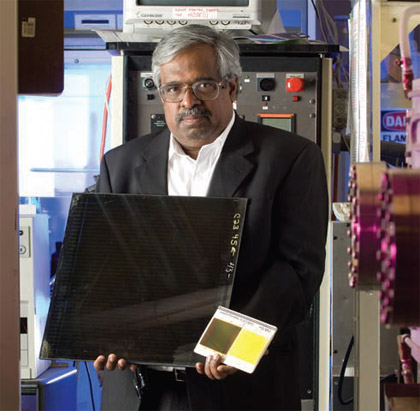 In 2008 BusinessWeek’s online edition named Abound Solar one of the most successful start-ups in the nation and one of 25 “hot” companies. The online magazine listed Abound among an exclusive group of national organizations that had raised the most venture capital in the 2008 calendar year. And in May 2009, the company signed a long-term sales agreement with “juwi solar,” a leading global solar integrator based in Germany.