Barely a decade after Lewis and Clark began their historic exploration of what is now the Western United States, the first expedition into Southwest Alaska embarked from Kodiak Island. Leading the party were two Russian American Company employees, Peter Korsakovskiy and Fedor Kolmakov. These men were charged with finding new territory to enhance the company’s fur trading portfolio. They were looking for beaver and found lots of them.

Imagine for a moment that these four explorers were able to return to the 21st Century and to the country they first saw approximately 200 years ago. Which pair would be more surprised: Lewis and Clark (because so much had changed) or Korsakovskiy and Kolmakov (because so much remains the same)? 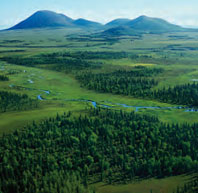 “Change” is the operative word. In the short span of two centuries we have scarred, gouged and paved much of the landscape through which Lewis and Clark travelled. The Native peoples that these men encountered are gone or reduced to reservations. The wildlife they observed and hunted is all but obliterated. The great Columbia River salmon runs are but a trickle of their former strength. And even that trickle is artificially maintained by hatcheries and millions of dollars’ annual expense to convey the few salmon that do return near the dams supplying electricity and water to millions of people that now populate the Pacific Northwest.

Change has not overlooked Southwest Alaska; but, in terms of land and its natural resources, that change has been gentle. It is still possible to follow the two Russian explorers’ journals and to camp in the same locations, to look out upon the same wild and unaltered landscape, to hear the same Native languages spoken there, to observe the same wildlife and to catch wild salmon from the same streams that nourished their expedition.

Drastic changes like those that decimated Lewis and Clark’s country, however, are looming over Southwest Alaska. The world’s largest open-pit gold and copper mine is now in the planning stages for the headwaters of the largest wild salmon nurseries remaining on earth — the Nushagak and Kvichak Rivers. Oil exploration is also under consideration for these same great rivers’ offshore waters. Post-Lewis and Clark Pacific Northwest history suggests that if large-scale industrial development of this kind does not doom wild salmon, it leads to other changes that will.

Two recent issues of livebetter magazine (Jan/Feb ’08 and Apr/May ’08) featured photographs and stories about Southwest Alaska. The latest issue highlighted photographer Robert Glenn Ketchum, who has used his artistry to document the natural world and the disturbing changes we humans have imposed on our environment. If we heed Ketchum’s message, which is really nothing more than a history lesson, we must alter our attitudes about the inevitability of change. For Southwest Alaska and for other parts of the world like it, that message is “enough!”