The Importance of Being Native

by Ken Undercoffer, President, Pennsylvania Council of Trout Unlimited April 17, 2008 Comments Off on The Importance of Being Native  Columns, Personal Perspective

I was about 13 when I caught my first trout, a native brookie that dashed out from underneath the washed-out roots of an old hemlock stump and took my worm-baited hook. Only the roots of that old stump remain on the edge of the pool where I was baptized into the world of trout fishing nearly 60 years ago.

There are still many old hemlock stumps standing like tombstones throughout Pennsylvania . . . all that is left of the massive white pine and hemlock forest that once covered most of the Commonwealth. These giant trees stood so thick and tall that sunlight barely reached the forest floor.

It only took a couple of generations for the lumber industry to reduce this magnificent forest to a gaunt wasteland. Fire swept through the cuttings soon after the loggers moved on, often burning even the thousands of years of humus that had accumulated on the forest floor. 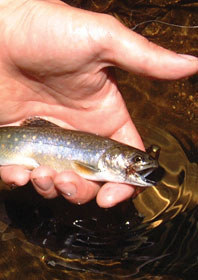 The scarred mountains and valleys have recovered in the intervening hundred years or more. Maple, beech and oak have replaced much of the evergreen forest, but majestic white pines once again top the hardwoods on many mountainsides. Hemlocks again stand tall in the forest bottoms along mountain streams and shade their waters from the sun. This is where brook trout still live and have for millennia.

The brook trout I caught that day was barely 6 inches long, legal size in those days. It was the most beautiful fish I had ever seen. Its back was deep green, like the moss that covered the rocks in Moose Creek, and vermiculated with a slightly lighter shade of olive. The sides were covered with brilliant red dots, each surrounded by a distinct blue halo. Its lower fins were crimson and pin-striped with black and white on their forward edges.

This particular brookie had squirmed up through the gravel of a redd late in the winter some three years before. It had managed to survive assaults by herons, mink, its larger brethren and, up to now, 13-year-old boys who would make a meal of it.

Brook trout are native to the Appalachians. They have been living here since long before the last ice age. They survived the demise of the saber tooth cat and the mastodon. They were here long before the first native American walked over this land. They have been victims of many assaults and have somehow endured. Maybe I sensed that as I admired this beautiful little fish in my hand although it took many more years for it to reach a conscious level.

Rainbow, brown, and brook trout have been transplanted into streams from one end of this country to the other. Now brook trout are invading the cold, headwater streams of Oregon and the West, displacing the native cutthroats that have been living there for millennia. Most major trout streams throughout the West are now dominated by non-native salmonids. European brown trout have invaded the best streams in Pennsylvania, driving the native brookie into headwaters, where it ismaking its last stand. Rainbows transplanted from the West Coast into the southern Appalachians have driven southern strain brook trout from many of the streams they once inhabited.

Native trout are an integral part of the natural order of things. Native species and undisturbed places are disappearing at an alarming rate. Hopefully, we will be able to preserve what is left before it is too late.