Why Everyone Needs To Build Green

by admin September 17, 2007 Comments Off on Why Everyone Needs To Build Green  Departments, Build Smart

Not every sustainability initiative benefits all stakeholders – particularly when it comes to business. But green building may be the anomaly. According to the United States Green Building Council (USGBC), a green hospital, designed with maximum sustainability in mind, reduces hospital stays for patients by 2 1/2 days – a direct benefit to people. When a green home is built, the market value of the building automatically increases per square foot – an economic gain.

And a green office building has a 40 percent carbon savings when compared to a standard commercial building – an environmental benefit. But green building doesn’t impact just one of these segments; all three occur concurrently with the implementation of the “Triple Bottom Line.” According to Joe Porrovechio, SAME Fellow, LEED®AP and Vice Chair USGBC New Jersey Chapter, the “Triple Bottom Line” is a balanced model that gives equal credence to place (environment), profit (economics) and people (health and comfort) – each benefit improving the other. “Doing the right thing today is the ‘Triple Bottom Line.’ It makes green building simple.”

What Is a Green Building? 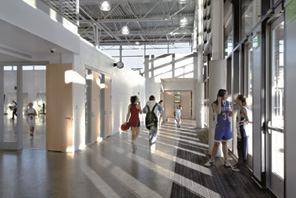 The USGBC, a non-profit and voluntary organization consisting of 10,000 member companies, was founded in 1993 with a vision of transforming buildings and communities into “environmentally responsible,” “economically profitable” and “healthy places to live and work.” In fact, this push to go “green” has spawned an industry worth more than $12 billion within one decade and has underscored a successful emphasis on productivity and efficiency – two standards that are vital to any business.

And the movement to build green, with its robust and hefty gains, is easier to join than one may imagine by utilizing items such as landscaping that retains stormwater, roofs that reflect heat and low-emitting materials that reduce pollution. This win/win relationship partners savings and revenue generation with a healthier and more safely built environment.

Why Does Green Building Matter?

According to the Department of Energy (DOE), there are more than five million commercial buildings and 76 million residential buildings in the United States. In a world where global climate change and energy conservation are of critical concern, modifications made on the literal home-front may be the answer to these complex challenges.

Startlingly, the USGBC concludes “buildings are responsible for nearly 40 percent of carbon dioxide (CO2) emissions in the United States due to energy use, water consumption and other operational issues. Carbon dioxide, a greenhouse gas that is a major contributor to climate change, has increased 18 percent since 1990 due to the rise in energy consumption.” According to Tom Hicks, USGBC vice president, “Improving energy performance will immediately… reduce building energy-related greenhouse gas emissions.” Because of its enormous impact, green building alone could be used as a national strategy to significantly reduce the effects of global climate change and could curtail this nation’s energy dependence.

To move this agenda forward, the USGBC created the Leadership in Energy and Environmental Design (LEED), which is a green-building certification program that provides for the best implementation of green strategies into the design, construction and maintenance of a building. Becoming LEED-certified is a proactive endeavor toward which environmentally conscious businesses, governments and industries voluntarily move so that factors such as site planning, air quality, material use and innovation are all assigned a score – ultimately leading to USGBC LEED Certification. LEED Certification has four levels; the highest is LEED Platinum, and the lowest is LEED Certified.

According to Porrovechio, the federal government, including the Department of Defense (DOD), the DOE and the U.S. General Services Administration (GSA), is required to meet a minimum LEED standard of Silver, which is only two tiers below the top certification. The Pentagon received this distinction in 2003 with its Metro Entrance Facility, which was the first DOD facility to receive such certification.

Porrovechio sees this approach as a multilateral, multifaceted system of balance because “…traditional practices of building are known to be less economical and less healthy,” while green building, on the other hand, is economically smart, people-oriented and environmentally friendly. 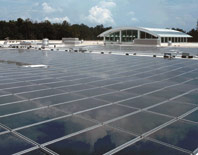 It may be difficult to understand how buildings can impact the quality of life and health of people, but buildings that are built green improve the health of their occupants.

Indoor air quality (oftentimes plagued with allergens, molds, CO2 and other pollutants) has become a major health issue as the average American now spends 85-95 percent of his/her time indoors. Because living and working in such an adverse environment can have devastating health impacts, the Surgeon General classifies indoor air quality as a top public health threat.

According to the Environmental Protection Agency, indoor air quality can be anywhere from two to five times worse than outdoor air quality. And in the worst conditions, air inside has tested up to 100 times more polluted than outside air. Such poor air quality has been linked to allergies, asthma and other illnesses.

Conversely, a Lawrence Berkeley National Laboratory study linked green building designs and improved air quality to positive results. As an example, the findings showed that the cost of healthcare for communicable respiratory illnesses could be reduced by up to 20 percent as a result of green building while healthcare costs linked to asthma and allergies could be reduced by 18-25 percent.

Jeff Riegle, an environmental engineer and LEED Accredited Professional with international engineering and project management firm AMEC, has worked in both green and non-green buildings. He maintains there is “definitely a remarkable difference… ” working in a green building. Often relying on natural daylight rather than on artificial lighting, green buildings have changed the working environment for Riegle, who says, “Whenever you can have sunlight, it’s definitely beneficial.”

In fact, this reliance on daylighting has a tremendous impact on school-aged children as well. According to the USGBC, students in classrooms that featured natural lighting performed better on tests than their counterparts in traditional buildings with the “least amount of natural light.” Moreover, the results were stunning: Students obtained scores 26 percent higher on reading tests and 20 percent higher on math tests – making green building especially attractive to concerned parents and educators who want their children and students to grow in a healthy manner intellectually – not just physically.

Green building’s positive influences are also felt on adult workers in an office environment. “A modest investment in soft features, such as access to pleasant views, increased daylight, fresh air and personal environmental controls can quickly translate into bottom-line savings,” the USGBC has written. Such design elements lead to less employee absenteeism, higher production within industry and greater work productivity (from 2-18 percent) within offices.

It may be difficult to understand how buildings can impact the quality of life and health of people, but buildings that are built green improve the health of their occupants.
Green building isn’t beneficial only to the health, performance and well-being of people; green building also leads to economic gains and incentives.

Riegle states that if implemented from the beginning, when a building is simply a blueprint, green buildings can be just as cost-effective as traditional buildings – an economic incentive giving builders and investors “more bang for their buck.”

In findings delivered to Congress, the USGBC stated, “. . . higher first costs are often recovered within three to five years through lower operating expenses and utility rebates for energy-saving equipment.” In fact, green building leads to energy cost savings from 20 to 50 percent.

But the benefits to going green aren’t seen only in savings; benefits also come in the form of capital gains. In Lawrence, Kan., Wal-Mart has created a green-built store known as “Eco-Mart.” Instead of relying on traditional overhead lighting for the entire store, “Eco-Mart” relies on natural sunlight through skylights in one-half of the building – a move that also reduced the cost of the store’s electricity bill.

When sales from the natural sky-lit section of the store were compared to the artificiallit sections with overhead lighting, findings indicate that those areas more heavily saturated with natural light had higher sales. Furthermore, the Heschong-Mahone Group, conducting research on behalf of the California Board for Energy Efficiency Third Party Program, determined that stores relying on sky-lighting gained 40 percent more sales than their non-sky-lit counterparts.

Still, some argue that going green is a costly endeavor that does not deliver a comparable return. Riegle couldn’t disagree more. When implemented correctly, green building and design are economically smart and necessary. As Riegle sees it, “an ounce of prevention is worth a pound of cure.” And it appears that the “pound of cure” comes in the increased market value of a green-built space.

The USGBC cites studies illustrating that for every dollar saved by implementing green technology or green design, a home or building’s value is increased by $20. In addition, a January 2007 survey of 250 residential builders across the United States released by Green Builder Media reported that “…buyers are willing to pay a premium of between 11 to 25 percent for green-built homes.”

The bottom line, then, is that going green both brings in and saves more green for businesses and private citizens.

While people and economics realize tremendous gains, the natural environment also benefits greatly from green development. As the nation continues to grow and to use many archaic and detrimental forms of energy, green building provides hope for the future of a healthier environment. According to the DOE, if California took every commercial and industrial building within the state and covered it with solar energy panels, the state would have enough energy to use during the day.

And, in a post-9/11 world, the natural environment plays an increasing role in national security. “Buildings powered by on-site renewable or super-efficient energy systems… are less susceptible to supply interruptions due to unpredictable circumstances such as natural disasters, power glitches and world events,” according to the USGBC.

As the country moves closer to a green existence, the health of the environment and the safety of the world are also improved.

With headlines reflecting a bleak future of global climate change and of deadly greenhouse gases, the world sometimes may seem grim. But one of the most significant solutions to such gloomy headlines is building green – an option that would reduce electricity consumption by 70 percent and greenhouse gases by 40 percent.

At times it may seem impossible to have a positive impact on the world, but green building offers a realistic, affordable solution to improve people’s lives, to make economic gains and to nurture the environment – all at the same time.

Porrovechio echoes that thought. While many people look to the future and wait idly for solutions to a myriad of increasing environmental problems, the answers are in the present. “There are so many things that can be done today. We just need to adopt and move forward with the current day’s technology. We don’t have to wait for future solutions to today’s problems,” says Porrovechio.

The answer is here today. And the solution is simple: Build green.