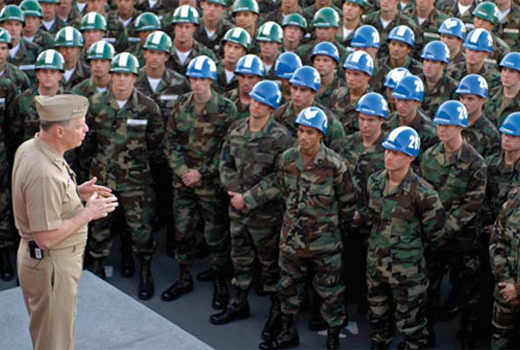 The dawn of the 21st century brought with it new challenges and unprecedented opportunities for international safety and security. Technological advancement, communication capability and booming global trade have led nations to become more interdependent than ever before. With this growth in trade and interconnectedness, however, come new vulnerabilities posed by nations and organizations. And, these susceptibilities can have sudden and far-reaching effects. With global dispersion of high-tech weapons that have accompanied technological advancement, the importance of the United States Navy’s deterrence to these threats is greater than ever. We are deployed forward and on the scene to prevent aggression, and we are the first responders when disaster strikes. As the Chief of Naval Operations, it is my job to ensure that our Sailors are ready at a moment’s notice to carry out their responsibilities while having the relevant capability and capacity necessary to perform the mission, regardless of time or place.

Last October two other service chiefs, Marine Corps Commandant General James Conway and Coast Guard Commandant Admiral Thad Allen, and I collaborated on a new maritime strategy. It was the first time all three maritime services came together to formalize a maritime strategy, and it encapsulates how our services will operate synergistically by sharing responsibilities, eliminating duplication of effort and maximizing efficiency. While defending the homeland and defeating adversaries remain the undisputable goals of seapower, we believe that preventing war is equally as important as winning war. Our objective in creating this new maritime strategy was to make a working blueprint, not a coffee table pamphlet. Its implementation would demonstrate its efficacy. We are developing new international relationships and expanding current ones with partner nations. We are assuring security on the seas and providing aid and comfort to those suffering from natural disasters and in need of medical care. Our Sailors, Coast Guardsmen and Marines are executing our maritime strategy with proficiency and professionalism.

The most difficult concept for some to grasp is how these missions prevent conflict. A Roman historian once wrote “se vis pacem para bellum.” Loosely translated this means “let he who wants peace prepare for war.” I believe the first rule of prevention is strength. Our strength comes from our traditional “hard power” and core capabilities: forward presence, power projection, sea control and deterrence. It comes from our aircraft carriers, our combatant ships, our submarines and our aircraft. Most importantly, our strength comes from our Sailors, our Marines and our Coast Guardsmen who are deployed today, and who demonstrate to those who wish to threaten peace that we, the United States, along with numerous partner nations, are ready for whatever may come. 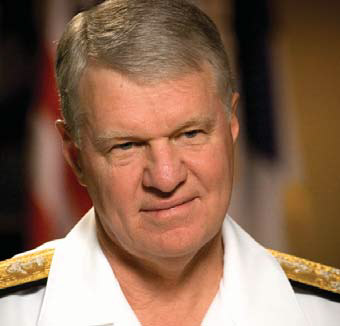 Continued demonstration of our formidable response readiness is critical to our success. We are a forward force whose capacity and capabilities are most clearly broadcast by our physical presence. We do not deploy to meet challenges or to provide assistance; we are already deployed and carrying out our maritime strategy. Several months ago when a crippled U.S. satellite was falling back to earth, it was the USS LAKE ERIE that destroyed it. More recently that same ship, in a very realistic test, destroyed a re-entering ballistic missile in its terminal phases. Such displays of indomitability are a powerful deterrent. Today a single carrier strike group in the Arabian Gulf is able to perform several simultaneous tasks. It launches strikes to support ground forces in Afghanistan while it simultaneously monitors and guards the Strait of Hormuz to assure the flow of critical resources from the Gulf. Our submarines gather vital intelligence while engaged in surveillance and reconnaissance. They act as critical enablers by ensuring sea control and the free navigation of global trade. Our Riverine Forces patrol Iraq’s Euphrates River, which, in turn, serves to protect vital infrastructure and to promote economic growth. Our Explosive Ordinance Disposal technicians guide Soldiers through minefields, and our medical Corpsmen deploy alongside our ground forces. Today nearly 15,000 Sailors are stationed in Iraq and Afghanistan while our Marines operate and dominate on the ground. The more we demonstrate our superiority, the more likely we are to prevent hostile incursions from potential adversaries.

The second rule of prevention is partnerships. Until recently this rule has been widely understood, even if frequently understated. In his recent article, Reflections on Leadership, Secretary Gates quoted General Fox Connor, who was a tutor and mentor to both General Eisenhower and General Marshall. Connor espoused three guiding principles for any democracy engaged in war. One of them was “never fight alone.” This principle is as true today as it was then. The need for cooperative relationships and for an expanding set of international partnerships is critical to our success.

Recently we have seen the effectiveness of such relationships. It was the international maritime community that was first to respond to the 2004 tsunami in the Indian Ocean. I distinctly remember that fateful phone call from my command center in Honolulu. The message was “There has just been an earthquake off the coast of Indonesia. We’re not sure what it will involve, but we’ll keep you posted.” In a few short hours the aircraft carrier USS ABRAHAM LINCOLN was surged from her port visit in Hong Kong. The USS BONHOMME RICHARD Expeditionary Strike Group was re-routed to Guam, where it nearly bought out the entire inventory of Home Depot. Within six days both ships were launching simultaneous relief missions in Indonesia, Sri Lanka and Thailand with the cooperation of 21 other nations and numerous non-government organizations. This response was made possible by the collaborative effort of international maritime forces.

Our countless partnerships make the world more secure and more prosperous. One such example is the Canadians’ recent deployment with an American Strike Group. In another effort my counterpart from Bahrain was the first leader from an Arab nation to command a maritime Combined Task Force – Task Force 152 in the Arabian Gulf. Our African Partnership Station (APS) is a third example of new relationships fostered in new regions. And, the USS FORT MCHENRY recently completed a six-month deployment to the West Coast of Africa. She visited 18 ports in 10 different countries and trained more than 2,000 maritime personnel in skills ranging from small boat handling to maritime law. Since FORT MCHENRY’s return the Coast Guard Cutter Dallas has deployed to continue helping our new partners.

Collaborative efforts of the international maritime community are making the world more secure and prosperous for all while inspiring a new generation of Sailors. Our Millenials see contributions we are making to the global community of nations, and this new generation realizes that these contributions have a greater breadth and scope than first anticipated. For example, we are finding that our improvements are positively impacting the oceans. In the process of training and preparing our Sailors, we are discovering new ways to benefit marine life. Sharing those lessons with our new and existing partners will go a long way toward protecting the maritime environment and toward promoting international good will.

The United States Navy will always remain ready to protect our homeland, to deter aggression and to work with international partners to promote global security, economic prosperity and environmental responsibility. Our maritime strategy, A Cooperative Strategy for 21st Century Seapower (www.navy.mil/maritime/MaritimeStrategy.pdf), is an ongoing success story thanks to the hard work and mutual efforts of the Navy, Coast Guard, Marines and our like-minded international maritime partners.