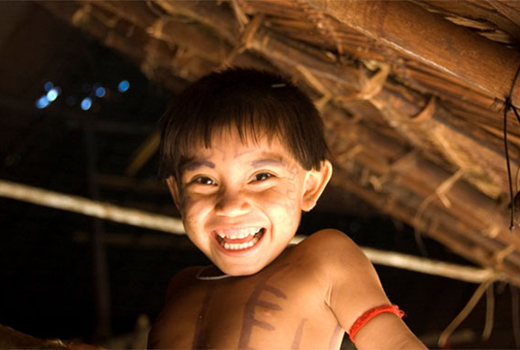 Deep in one of the remotest parts of the Brazilian Amazon, in a clearing at the headwaters of the Envira River, an Indian man looks up at an aeroplane. He is surrounded by kapok trees and banana plants, and by the necessities of his life: a thatched hut, its roof made from palm fronds; a plant-fibre basket brimming with ripe pawpaw; a pile of peeled manioc, lying bright-white against the rainforest earth. The man’s body is painted red from crushed seeds of the annatto shrub, and in his hand is a long wooden arrow held, in seeming readiness, close to its bow. At his side, children, naked but for cotton waist-bands, gaze up in amazement.

It is a photograph of one of the last uncontacted tribes in the world, taken in June 2010 by FUNAI, Brazil’s Indian Department, together with what is thought to be the first-ever film footage. Survival International published the images in order to help protect the lives of the tribe by proving their existence. They were also broadcast in the “Jungles” episode of the BBC’s landmark “Human Planet” series. (For more information, read livebetter’s “Uncontacted Tribes: By Choice or By Chance?”)

The viewing numbers of the footage were extraordinary. The moment they were published, thousands of people per minute were looking at the images on Survival’s website. Since then, more than three million people have seen them. The footage and photographs have appeared in thousands of media outlets; more than 5.1 million people watched the BBC’s programme.

Importantly, the Peruvian Government announced within two days of publication that they would work with Brazilian authorities to stop loggers entering isolated Indians’ territory along the two countries’ joint border, testament to the belief of José Carlos Mereilles, FUNAI’s uncontacted expert, when he said, “One image of them has more impact than a thousand reports.”

Toby Nicholas of Survival International, who is responsible for Survival’s website and monitoring the traffic and statistics, said, “The pictures spread across the world within minutes and produced a wave of support for uncontacted tribal peoples greater than anything we’ve ever seen before. Huge numbers of people were able to take small steps like signing a petition – and they did.”

That they have captured the imagination of millions can be seen from international posts of awe and outrage on Facebook, You Tube, Vimeo and other sites. Messages about respect and diversity, about their right to stay free from oppression and the avarice that pushes loggers, miners and other extractive corporations further into their territories; about their ecological awareness and their absolute right to live in the way that they choose. “If these tribes and rainforests aren’t saved, the rest of mankind will follow,” read one post. Another just simply said, “Il n’y a pas de mots.” 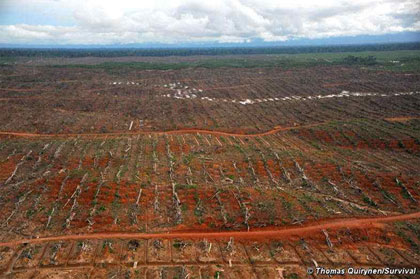 Today, more than 100 uncontacted tribal peoples exist worldwide. This means that from the Amazon to the Andaman Sea and the remote highland rainforests of West Papua, more than 100 tribes still live – and live successfully – in isolation from the mainstream society of their country.

Very little is known about them. We know that the uncontacted Indians seen in this part of the Amazon move across the rainforest at different times of the year and live in the heart of the forest when water levels are high and then camp on the beaches that form in river bends during the dry seasons. We also know that the Sentinelese have lived on North Sentinel, a small Indian Ocean island surrounded by coral reefs, for up to 55,000 years and are thought to have been part of the first successful human migrations out of Africa.

Of course, many myths circulate: They are “lost” tribes (nothing but sensationalism); they are “backward” for their alternative ways of life or nakedness or “stone-age” for their lack of material possessions (it’s the ideas that are outdated, not them). Or, they have tried and failed to keep up with the “modern” world (a conceit that presupposes western society is the pinnacle of human aspiration and all other cultures are striving to reach it).

We also know they have little understanding of cars, hospitals, banks or the internet, and that they are, in the words of José Carlos Mereilles “the last free people on earth” – free from the influence of governments, subliminal powers of advertising, the media and thoughts of others.

According to Survival International, biofuels, hydro-electric power, forest conservation and carbon offsetting are threatening tribes from Brazil to Borneo. Some of the tribal representatives’ direct comments are expressed as follows:

Biofuels. “The big sugar cane plantations are now occupying our land. Sugar cane is polluting our rivers and killing our fish. (It is increasing) suicides, mainly among young people, alcoholism and murder.”

Hydroelectric Power. “The water from the dam will flood our traditional lands, including our villages, properties, gardens, paddy fields and farmlands, fruit trees, graves, etc. We will be forced to move to an area we do not know and is not compatible with our life conditions.”

— Statement by a group of Penan whose land is due to be flooded by the Murum
dam, Sarawak, Malaysia

Forest Conservation. “Everyone has been living in fear for the last month. This is very serious. The Ogiek have nowhere else to go. People are crying about the eviction. The government said it would spare no one.”

— Kiplangat Cheruyot, Ogiek People’s Development Program. The Ogiek are threatened
with eviction from Kenya’s Mau Forest in the name of conservation.

Carbon Offsetting. “REDD (known collectively as Reduced Emissions from Deforestation and Forest Degradation) will increase violation of our human rights, our rights to our lands, territories and resources, steal our land, cause forced evictions, prevent access and threaten indigenous agriculture practices, destroy biodiversity and cultural diversity and cause social conflicts.” 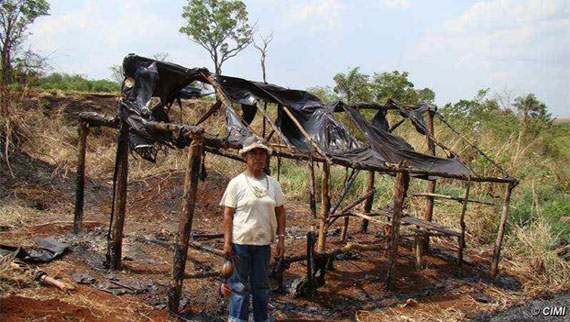 © CIMI | A Guarani house burned down during violent evictions that will make way for deforestation to open land for cattle ranching.