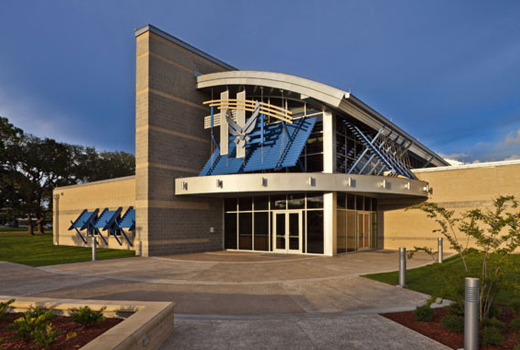 As our Nation’s senior military leaders note, our country is in a new paradigm. We can no longer operate as if budgets always rise and resources always replenish. We must make a commitment to a transformation in the U.S. Air Force, one that focuses on smarter, faster, better and cheaper ways to accomplish our mission.

For our Air Force installations, this call to action means using every dollar – and every gallon of fuel, every yard of lumber, every ounce of concrete – wisely. We must transform our installations to ensure they are not only the right size to support our forces and the mission, but also that they are leaner, cleaner and smarter as well. In short, we must build sustainable installations, which allow the Air Force to continue to “fly, fight, win.”

“Meeting real-world requirements. Doing right by our people. Reducing excess. Being more efficient. Squeezing costs. Setting priorities and sticking to them. Making tough choices. These are all things that we should do as a Department and as a military regardless of the time and circumstance.”

“As we address . . . numerous challenges, we will have to contend with budgetary pressures that, for the foreseeable future, will constrain our ability to merely purchase future solutions with insufficient attention to cost, and instead will compel us to be more innovative, creative and efficient.”

This vision is in keeping with recent presidential directives. Executive Order 13514, signed by President Barack Obama October 2009, called on the Federal government to demonstrate leadership in environmental, energy and economic performance. As President Obama noted, “The Federal government can and should lead by example when it comes to creating innovative ways to reduce greenhouse gas emissions, increase energy efficiency, conserve water, reduce waste and use environmentally responsible products and technologies.”

In conjunction with this Order, in 2010 the Department of Defense (DoD) also crafted its first department-wide sustainability plan to promote these efforts. The Department of Defense Strategic Sustainability Performance Plan outlines goals and performance expectations for the next decade. It addresses issues such as greenhouse gas emissions, solid waste management, energy efficiency, use of landfill gas, renewable energy, toxic and hazardous materials, non-tactical vehicle fleets, high performance green buildings, water efficiency and reclaimed water, and employee business travel and commuting.

According to the DoD Sustainability Plan, sustainability is defined as “the ability to operate into the future without decline – either in the mission or in the natural and manufactured systems that support it.” Our undertakings to increase our use of renewable energy, to make our buildings and vehicles more efficient, and to limit our use of fossil fuels are all part of our commitment to meet the Department’s definition and vision.

A History of Sustainability

The Air Force’s emphasis on sustainability actually dates back to 2001 when then Air Force Civil Engineer Major General Ernest O. Robbins II issued a policy to “apply sustainable development concepts in the planning, design, construction, environmental management, operation, maintenance and disposal of facilities and infrastructure projects consistent with budget and mission requirements.” Maj. Gen. Robbins noted sustainable facilities achieve optimum resource efficiency and constructability while minimizing adverse impacts to the built and natural environments through all phases of their life-cycle.

The Air Force built its first facility capable of the U.S. Green Building Council’s (USGBC) Leadership in Energy and Environmental Design (LEED) certification in 2002 when a fitness facility at Barksdale Air Force Base (AFB), in Shreveport, La., received a LEED “Bronze” status (the equivalent of the “Certified” level of today’s LEED system). The building’s construction used materials and processes such as recycled flooring and lockers, low-flow water fixtures, rainwater harvesting, heat recovery and high-efficiency heating and cooling systems.

Since 2002, we’ve continued to add to our list of LEED certified facilities and, in fact, in 2007 issued an Air Force-wide “Sustainable Design and Development Policy” memorandum declaring that all new Air Force construction projects should be capable of achieving USGBC LEED Silver rating. 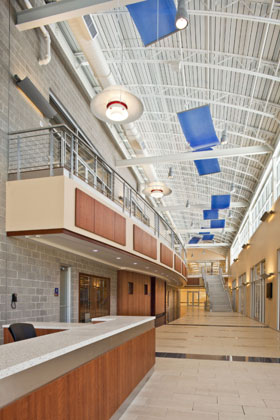 Today, the Air Force continues this commitment to sustainable development and green buildings with its first facility achieving LEED “Platinum” status: the fitness facility at Tyndall AFB, Fla. At the new Tyndall facility, energy consumption is expected to be 40 percent less than a typical building of the same size, and water consumption is expected to be 40 percent less as well. These savings will come as a result of using low and ultra-low water fixtures; native, drought tolerant landscaping that requires no outdoor irrigation; cool-roof technologies; and renewable energy and hot water generated from solar panels on the roof.

In further keeping with LEED standards, about 35 percent of construction materials were found within a 500-mile radius of the base, thus reducing energy costs and usage associated with long-distance transportation. More than 40 percent of materials purchased for the project had recycled content. Builders also minimized volatile organic compounds used during construction to maintain a healthy indoor environment. The facility also features premium parking for low-emitting, fuel-efficient or alternative-fuel vehicles at the site.

Currently, more than 300 Air Force facilities are on track for future LEED certification. We will continue to work with our private sector partners while employing emerging technology to pursue even greater LEED and sustainability advances as we move forward.

Green building, however, is only one part of our overall goal of sustainable installations. To reach our ultimate goal, the Air Force and sister services recently partnered with the Department of Energy to establish a net-zero installation at the U.S. Air Force Academy, Colorado Springs, Colo. Net-zero installations generate as much energy as they consume through efficiency technologies and on-site power generation.

Thus far, energy conservation projects and renewable initiatives at the Academy include the following: a solar power project that will result in a 6-megawatt solar array producing 11-15 percent of the Academy’s electrical consumption; ground-source heat pumps installed at six facilities; $2 million in lighting, heating and air conditioning projects in fiscal 2010 expected to save more than 11,000K BTUs; $2.7 million in lighting and HVAC projects in Fiscal 2011 with 57,000K BTUs in savings; and $1 billion programmed for 2006-2023 to fix infrastructure installation-wide. All new buildings and major renovations will also meet LEED standards and contribute to net-zero.

However, the Academy’s commitment to Net-Zero is more robust and multi-dimensional than just building upgrades and renewable energy installation. For example, under DoD’s Environmental Security Technology Certification Program (ESTCP), a project conducted at the Academy is documenting design and construction requirements and costs, as well as heat energy reduction and carbon energy reduction of an energy foundation heat pump system. The goal of the ESTCP is to identify and to demonstrate cost-effective technologies that address DoD’s highest priority environmental requirements. The expected benefits of this heat pump system include a reduction in energy consumption required to heat and to cool the building and reduction of carbon emissions when compared to a conventional HVAC system.

Finally, proving that small actions can also reap big rewards, the Academy implemented the mandatory shut down of all computers and electronic equipment at day’s end. After three months, this simple action showed a 2 percent reduction in energy usage, which translates to a savings of $100,000 per year. With these and other initiatives, the Air Force Academy is dedicated to changing its culture around energy, the environment and sustainability.

Due to our sustainability efforts at installations such as Tyndall AFB and the Academy, the Air Force has been recognized for leading the way in green power and sustainable facilities. In fact, the Air Force was recently recognized by the U.S. Environmental Protection Agency as one of the Nation’s top purchasers of green power for on-site production of 243.9 million kilowatt-hours of green power. The Air Force use of renewable energy ranks number one in the DoD, number two in the Federal government, and number 15 among 1,300 Green Power Partners, which includes large corporations such as Wal-Mart and Intel, and municipalities such as Dallas and Houston.

Of the awards, Minot AFB, N.D., was selected for replacing an aging central heating plant, which was the primary heating system for more than 90 facilities. In its place are 400 tons of ground source heat pumps for large facilities and facility-specific high-efficiency boilers for the remaining facilities. The heat plant decentralization saved 114 billion BTUs of energy and 16 million gallons of water in fiscal 2009. This reduction of 22 percent and 13 percent, respectively, from fiscal 2006 saved $2.6 million in energy and water costs and more than $48,000 annually in maintenance and repair costs. The new system also reduced total greenhouse gas emissions by more than 4,000 metric tons of carbon dioxide, a 19 percent reduction.

Hickam AFB, Hawaii, was an award winner after the installation of a 146 kilowatt photovoltaic array co-located with a hydrogen refueling station. The array was to support the creation of hydrogen for alternative fueling of vehicles being tested by the Army and the Air Force. For the first 10 months after installation, the array produced more than 200 megawatt-hours of electricity, prevented the release of almost 700 metric tons of carbon dioxide and saved $35,000 in utility costs. No cost was associated for the hydrogen, and the fleet of hydrogen fuel cell hybrid vehicles further reduces greenhouse gas emissions.

The third Air Force award winner was Kadena Air Base in Okinawa, Japan, in the area of water efficiency. Since Okinawa is dependent on rainfall for fresh water, water is one of the most valuable natural resources in that area. To increase their stewardship of this resource, officials at Kadena use a whole-building and integrated design approach for the repair and modernization of existing base facilities. The plan includes installing ENERGY STAR clothes washers, implementing an aggressive water leak detection and repair program, installing efficient plumbing fixtures in dormitory rooms and establishing a robust water conservation awareness program. By replacing 302 standard-issue clothes washers with energy– and water-efficient models, and installing more than 1,700 efficient aerators and 1,350 showerheads and water closets in 17 dormitories, the base realized a water consumption savings of about 141 million gallons in fiscal 2009. That is a 7.8 percent reduction from the previous year and a 14.9 percent reduction from the fiscal 2007 baseline.

Although we are proud of this recognition and these awards, the Air Force must maintain our momentum and continue our march down the path towards our goal of sustainable installations. The security of our Nation depends on us meeting and exceeding our goals. Therefore, we need to continue to incorporate renewable energy and high-performance green buildings. We must commit to reduce our natural resource demands, especially in energy and water, and we need to change our culture when it comes to how we use – and view – energy and the environment.

As we look forward, these are objectives I am certain we will attain. I know that our commitment to sustainability is not only guided by policy, but by the core belief that sustainable installations provide an operational advantage to our force. They allow us to be more energy independent and secure, to use resources more efficiently and effectively, and they allow us to care for our Airmen and their families — the very core of who we are. I look towards the future with excitement, towards an Air Force that provides for the warfighter and continues to “fly, fight, and win in air, space and cyberspace.” 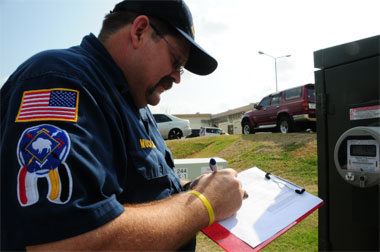 U.S. Air Force photo/Staff Sgt. Lakisha A. Croley|John Muckey, resource efficiency manager for the 718th Civil Engineer Squadron, takes a reading from one of the several meters at Kadena Air Base, Japan. Mr. Muckey was part of a team effort to bring home the 2009 Federal Energy and Water Management Award.