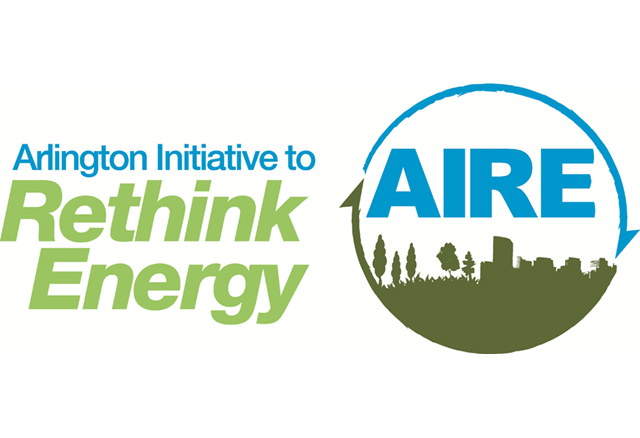 Sustainability – the intersection of people, planet and profit – is part of the Arlington, Va., culture.  Terms like “energy efficiency,” “green building” and “transit-oriented development” define it and are commonplace here.  County staff and residents have long understood the value and benefits these things provide for current and future generations.  And, they have made sustainability a priority in community planning and development.

Vision comes first.  In Arlington, visionary planning goes back more than 50 years when leaders and residents first embarked on a pattern of “smart growth,” long before the term was coined, as part of the region’s Metro planning. Sustainability is inherently part of smart growth as it aims to achieve a balance of density, walkability and efficiency.  Arlington’s leaders made the critical decision to place the Metro line along the major urban corridors instead of down the median of the I-66 highway.  This placement facilitated development of the County’s successful pedestrian-friendly, mixed-use urban villages at each Metro stop.  This long-standing commitment to integrated urban development has made Arlington a national model.  The County has even earned numerous awards for its solutions, which are often on the leading edge of urban planning.

Today’s County leadership and residents continue this commitment and have broadened the effort to include energy.  They believe that reducing energy use is good for their economic competitiveness and the environment.  Residents go above and beyond with choices like green home renovation projects and going car-free.  These aren’t easy decisions to make, but they are worth the effort.  And, they are paying off in a big way.

In 2007, the Chairman of the County Board (Paul Ferguson) made a bold commitment to the community.  Arlington County government would strive to meet an aggressive emissions reduction goal in the next five years while supporting community efforts to set goals of their own.  To achieve this, the County established the Arlington Initiative to Reduce Emissions (AIRE) Program and established a dedicated funding stream for its work by adding a utility tax.  The program was renamed in early 2013 – the Arlington Initiative to Rethink Energy – to mark the next phase of Arlington’s energy journey. County Board members (including both Paul Ferguson and Jay Fisette) set the goal of reducing government emissions by 10 percent by 2012.  They wanted the emissions reduction goal to be obtainable rather than aspirational, and they also wanted to be around to answer for the success or failure of the initiative.

Arlington was already known as a national leader for many environmental policies.  Green building using LEED (Leadership in Environmental Energy Design) standards for both the public and private sector; strong, transit oriented development; bicycle lanes and trails; and tax breaks for hybrid vehicles were policies that preceded the AIRE initiative.  However, Ferguson and the other County Board Members wanted Arlington to join other localities calling for Federal action to address global warming.  Localities maintaining a strong economy while showing emissions reductions could serve as a national example.  And, Arlington accomplished that.

In May 2013, the County announced it had not only met but also exceeded the goal of reducing greenhouse gas emissions by 10 percent from government operations by 2012, using a 2000 baseline.  In fact, the County achieved nearly 12 percent emissions reduction despite a square footage growth of 17 percent in county buildings, expanded services and increased population.  The Arlington economy also continued to thrive and is known as one of the strongest in the United States.

Under the auspices of the AIRE program, the County implemented a variety of energy measures to achieve this, such as:

The combination of actions taken to reach this goal proved to be a winning one.  Achieving this first big milestone serves as a solid foundation for Arlington and helps pave the way to achieving bigger, broader energy goals for the community.

2013 was a solid year for Arlington in energy terms.  After the 2012 goal announcement, the County Board adopted a new element of the County’s Comprehensive Plan (CCP):  energy.  The Plan, which guides “coordinated and harmonious development of the County,” already includes elements on land use, transportation, stormwater, water distribution, sanitary sewer collection, recycling, public spaces and historic preservation.  No energy element had previously existed in CCP, although energy is a critical component to providing public services and can greatly affect things like transportation and recycling.  And, ways that energy is generated, used and distributed can greatly impact the environment both locally and globally.  As a result, energy is now part of CCP and is seen as one of the guideposts for development in Arlington.

This new element of CCP – the Community Energy Plan (CEP) – is the result of more than three years of community engagement.  It outlines a transformative approach to planning and developing Arlington’s energy future with a long-term goal of reducing greenhouse gas (GHG) emissions by more than 70 percent by 2050.  This goal would bring Arlington’s GHG reduction down to 3 metric tons of carbon dioxide equivalent (CO2e) per capita per year by 2050.  (For comparison purposes, in 2007 the Arlington community produced 13.4 metric tons CO2e per resident.)  Using GHG emissions as a measure of overall energy productivity, a lower number indicates more efficient energy use.  CEP’s six goal areas include:

The overall goal of CEP is to create the most desirable and competitive commercial, residential and retail market in the region and country.  Implementation of the Plan will provide a competitive development environment with lower operating costs, enhanced energy reliability and decreased power disruptions.  Recommendations in CEP are voluntary goals with community input and active participation critical to achieving them.

Good local governments are good at planning and then committing to implement those plans.  After leading by example by reducing the government’s emissions footprint, the County successfully engaged seniors from a wide array of stakeholders and came to a consensus.  Arlington is now on the energy map.

Tackling upgrades in the County’s building portfolio has been a careful process of prioritization, cost-benefit analysis, and ongoing monitoring and maintenance.  With the motto “lead by example,” transparency is important, which is why the community is actively engaged in this process too.  The County accomplishes this by posting annual building data to its website and by hanging energy performance labels in each of its building entryways.  This information provides visitors with a quick snapshot of results.

Central Library.  Arlington County Central Library, originally built in 1961 and expanded in 1994, is a multi-storied 131,100 square foot building (including garage) open for more than 80 hours per week.  It is the primary resource for the County library system and one of the largest public library collections in Metro DC.  Its energy use runs the typical heating, cooling, ventilation (HVAC), lighting and water heating equipment associated with any commercial building as well as a robust public access computer center, staff office equipment and an auditorium that hosts library and community events.

In 2000, Central Library used 2,769,440 kWh of electricity, which carries a heavy environmental burden equating to more than 1,500 metric tons of CO2 equivalent (mtCO2e).  In 2001, the County’s energy management program began in earnest and made a series of adjustments to the building automation system and some lighting upgrades.  In 2007, the energy management team returned to the Library and invested in additional lighting retrofits.  This included retrofitting all fluorescent fixtures from T12 lamps with magnetic ballasts to T8 with electronic ballasts, replacing high-wattage indirect pendant fixtures with T8 fluorescent pendant fixtures and all incandescent lamps with either compact fluorescent or LED lights.  The team also upgraded auditorium lighting to dimmable LED downlights. 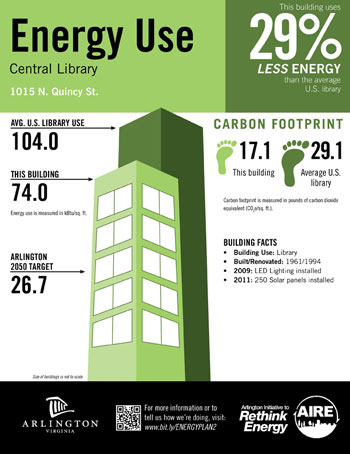 In 2011, a federal grant was used to install a 60-kWDC solar power system on the library’s roof, which produces 5 percent of the building’s annual electricity needs and decreases its peak energy demand by 15 percent.  This has led to demand charge savings.  To connect library visitors with this building feature, they can explore an interactive kiosk display in the lobby for live readings from the panels.  The library is now getting a new chiller – a high-efficiency, variable-speed modular unit that will recover heat to provide domestic hot water.  The project is underway, and the library will see further savings.

The County has saved more than $200,000 in electric costs since 2008 due to these improvements.  This has reduced building emissions by nearly one-third since 2000, which is equivalent to removing 85 cars from the road or providing electricity for 61 homes for one year. When this building is benchmarked against a nationwide sample of libraries, Central Library used 29 percent less energy in 2012 than its peers.

Detention Center.  The Arlington County Detention Center is a 650-bed jail, which employs almost 200 full-time staff.  Built in 1994, it is one of the County’s largest facilities with a square footage of 434,000.  The ultimate in high-occupancy 24/7 operation, the Detention Center has unique requirements that result in high energy use, including continuous ventilation, a high volume kitchen and laundry.  In November 2009, the County completed work on an energy-savings performance contract that produced significant reductions in electricity and water use in the Detention Center.

ConEd Solutions, the energy service contractor, completed extensive lighting retrofits, replaced virtually all plumbing fixtures, upgraded the building automation system and installed new heat recovery ventilators.  As a result, energy use decreased 10 percent, which translates to reduced carbon emissions of more than 800 metric tons of CO2 equivalent in 2012.  This is more than $100,000 in savings and equivalent to removing 175 cars from the road or to sequestering carbon by 700 acres of forest for one year.  In addition, replacing plumbing fixtures reduced water consumption by more than 60 percent, thus saving 20 million gallons of water and reducing water and sewer costs by more than $250,000 per year.

The Detention Center shares an underground garage and some mechanical systems with the Courts Police building next door.  Together, as the Arlington County Justice Center, it has earned the ENERGY STAR label three times (2010, 2012 and 2013) and demonstrated continued excellence in energy performance. 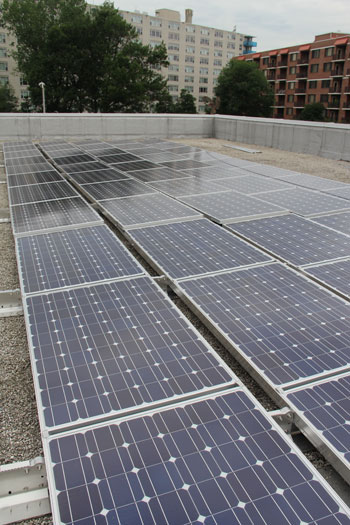 In 2012, Arlington County joined the US Department of Energy’s Better Buildings Challenge to continue leading by example.  Within this voluntary commitment, the County government’s goal is to reduce its building portfolio energy intensity (energy per square foot) by 20 percent by 2020 compared to a 2009 baseline.  This raises the bar for Arlington, thanks to gains in efficiency already achieved.  However, the County plans to continue harvesting savings using evolving technology and best practices for “smarter” buildings.  In addition to its own commitment, the County encourages participation in the Better Buildings Challenge by commercial properties and nongovernmental institutions. Greater energy efficiency benefits the entire community through reduced energy costs, improved resilience and capital improvements.

Arlington government greenhouse gas emissions comprise less than 3 percent of total county emissions.  Therefore, community outreach is critical for long-term success.  Reducing, tracking and managing emissions from government operations are big hurdles.  But, beyond that, the County has no direct control, which is why connecting with the broader community became part of the AIRE mission as well:

The Arlington Initiative to Rethink Energy (AIRE) helps our community make smart decisions about energy and supports individual actions that improve and sustain Arlington’s quality of life.  Through rethinking energy, we are committed to energy practices that will make Arlington County a more prosperous, healthful, safe and secure place to live, work and play.  Come join us! 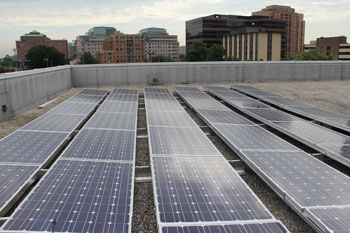 Everyone enjoys the benefits of a clean, healthy environment, a prosperous economy, dependable energy services and a safe and secure energy future.  This is why AIRE supports Arlington residents, businesses and government in working toward these goals.  Through various community outreach programs, such as the Arlington Green Games, Green Home Choice and the Green Building Program, AIRE provides resources and sponsors events to connect the community with goals and specific ways to achieve them.  Above all, AIRE reminds everyone to “be smart; think less”.