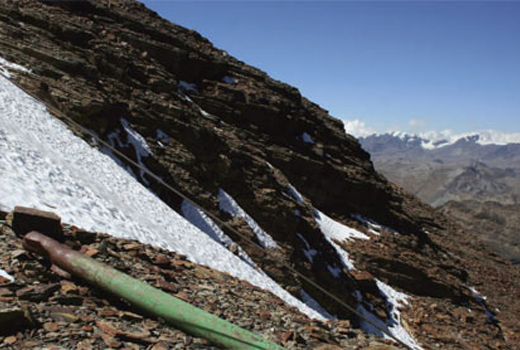 The world’s highest ski slope with a lift,” as Chacaltaya is identified in most travel guides to Bolivia, ceased to exist a few years ago. Even though the lift has also gone out of operation, until recently one could still view an occasional skier laboriously making his/her way up Chacaltaya Mountain from the ski hut and parking lot at 5,200 meters (m) altitude. Sadly, all that’s left to see is a glacier that’s now melted away but for one ice patch, as a July 2009 visit demonstrated. Global warming has taken its toll on the 18,000-year-old surface, once the Earth’s highest ski resort.

The Chacaltaya Glacier is not only the best-known glacier of the 1,830 Bolivian glaciers counted by German geographer Ekkehard Jordan but also the best-studied one. Since 1991 a French-Bolivian team of experts has been measuring the La Paz glacier’s shrinkage and documenting the major environmental disaster of our day as well as in decades to come: climate change. According to the World Glacier Monitoring Service (WGMS), 25,908 km2 of glacier area exists in South America; that represents less than 0.2 percent of the global glacierized area of 15,861,766 km2. The 566 km2 of Bolivian glaciers* are a mere 2 percent of the South American total.

By a different count Bolivian glaciers make up 20 percent of all tropical glaciers in the world. Although very close to the Equatorial sun, they have been able to exist for thousands of years, primarily thanks to their high altitudes. Now, with the effects of global warming in full swing for the past two or three decades, tropical glaciers have become a “species in extinction.” And, Chacaltaya is only the most visible sign of this. A large number of the smaller glaciers at altitudes between 5,000 and 5,500 m have already melted away. They are unnoticed by the wider public.

Global warming is doubly dangerous to tropical glaciers as the warming rate is about twice as high in high altitudes of 5,000 m or more as scenarios from global climate models show. Figures for Switzerland have already confirmed this tendency for the past 30 years: The Swiss Alps have warmed at an average of 0.6º Celsius per decade while the lowlands warmed at the global average of only 0.3º Celsius. So, glaciers continue to lose their ice mass – often at unprecedented speed – and render expert estimates obsolete virtually the moment they’ve been pronounced in many cases. Only a few years ago, the investigative team of glacier and climate experts expected Chacaltaya to last another 10 to 15 years yet, by 2010, the last little patch of ice will have disappeared.

In Bolivia only in the past two or three years have melting glaciers become a subject of some public interest. Until recently, the Bolivian Andean Club harbored plans to save their skiing site by either placing a plastic cover over it or by installing snow machines. Apart from the economic impossibility, these ecologically questionable methods, copied from the European Alps or North American Rockies, would not have worked because of special conditions affecting glaciers at high tropical altitudes. What had not been considered were inherent differences from glaciers of Northern latitudes. While the Alps or Rocky Mountains have a long winter period “feeding” the glaciers with new snow on their upper areas and putting up winter accumulation against summer loss, tropical conditions under a warming tendency create a basically year-around loss situation. Winter is a cold but dry season with summer wet but warmer.

While the world is mourning the loss of a ski slope and some scenic beauty of the Andean Cordillera mountain range, something more devastating is actually happening. Vanishing glaciers have severe impacts on the hydrological regime and, thus, on water availability downstream. While impacts on agriculture or biodiversity are more difficult to measure, there is now a first study on socio-economic impacts quantifying the relevance of glacier melting for the drinking water supply to growing El Alto – 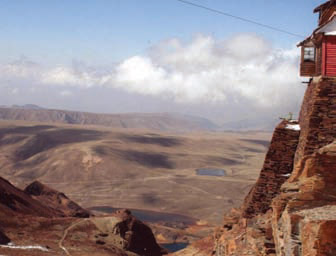 La Paz. The predictions are frightening; as early as the end of the dry season (October 2009), the first water shortages may be expected.

Scientists are also now beginning to calculate the economic damage caused to poor countries like Bolivia and Peru, which will see their hydroelectric energy production capacity, as well as their capability to deliver drinking water to major population areas like Lima, La Paz or El Alto, severely affected. New water storages will have to be constructed high up in the mountains, which will have not only a serious impact on biodiversity but also on the peasants’ irrigation facilities at a cost of hundreds of thousands of additional dollars.

No campaign to “save the mountain whales” can have any effect upon saving Chacaltaya or the rest of the Tropical Andes glaciers, if one considers the climate system’s inertia. Even if all greenhouse gas (GHG) emissions stopped on this very day, global temperature would rise for a few more decades. Ironically, emissions from post-war decades are what’s currently killing glaciers. Impacts of more recent – and much larger – GHG emissions are still in line to take their turn in 20 or 30 years’ time.

And while my father-in-law won skiing championships on Chacaltaya in the 1970s, my little son will not remember having once played on the last remains of ice when he has grown up. What am I to do? I take as many photographs as I can, keep measuring glacier tongues in a few chosen places, document the disappearance of those icy dinosaurs of the Andes as accurately as possible and try to alert the world about the impacts climate change is already having on a good part of the Bolivian population.

The glacier will be all gone by next year. The Andean Club of Bolivia (Club Andino de Bolivia or CAB) will have lost its major asset, this unique skiing slope going up to 5,400 m.a.s.l. – the highest in the world with its own ski lift. What is to happen with the mountain cabin built of local stone in 1939? It dates back to the ski and mountaineering pioneers of the 1930s and 1940s. And what about the marvelous smaller wooden cabin with the ski lift’s engine, which dangles dangerously over the precipice? Jointly, the Andean Club, owner of all installations on Chacaltaya, and the Bolivian Mountain Institute (BMI) have started to implement what they call a “New Vision for the Chacaltaya.”

The CAB is modernizing the larger cabin by adding comfort and sleeping capacity and by offering snacks and coca tea to fight altitude sickness. As a result, the mountain cabin is well on its way to becoming not only a tourist attraction with excellent views of the surrounding mountains easily reached by car in less than two hours from La Paz city center but also a high-altitude training and acclimatization center. Parallel to this effort, the BMI is presently fundraising to turn the smaller cabin, which hosts the ski lift engine, into a “Chacaltaya Glacier and Climate Change Museum.”

The Bolivian Mountain Institute (BMI) is a La Paz-based non-profit foundation dedicated to applied research in Bolivian high mountain areas. Inspired by the International Year of Mountains (IYM 2002), the BMI was founded in the same year with its own modest offices by 2004. In accordance with the United Nations’ Agenda 21, the mission of the BMI, as established in its founding charter, is as follows: “Contribute to a sustainable development of mountain regions in Bolivia by means of scientific investigation, capacity building and technical assistance, exchange of experience and the realization of projects.” For more information please visit the website at www.bolivian-mountains.org or email Dirk Hoffmann at bolivian-mountain-institute@gmx.net. *This data is from the late 1980s. As of 2009 the probable total is now approximately 20-25 percent smaller.