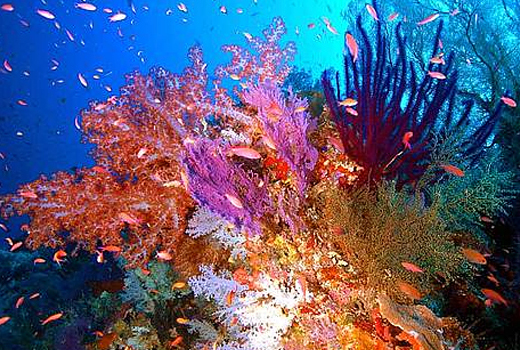 (www.unesco.org) – Rising atmospheric carbon dioxide levels (CO2) are causing the ocean to acidify at rates not seen for the last 20 million years. Atmospheric carbon dioxide is absorbed by the ocean (at least one-half of all emissions pass into the seas), thus increasing acidity and resulting in “ocean acidification.” A more acid ocean affects marine plants and animals by causing calcium carbonate – the substance of shells and skeletons, and the basis of much of the ocean’s phytoplankton – to dissolve. This greatly affects marine food webs and causes extinction of species vital to the health and productivity of the earth. Business as usual scenarios for CO2 emissions could make the ocean up to 150 percent more acidic by 2100. Regrettably, these problems are not yet recognized outside the oceanographic research community.

Ocean acidification impacts on marine life, and their ultimate socio-economic effects, are potentially dramatic. Coastal communities and small island developing states (SIDS), which rely on marine-based ecosystem services for a significant portion of their livelihoods, will be the first to feel impacts of increased ocean acidification. Global decrease of coastal marine resources and decline in marine biodiversity will affect countries dependent on coastal fishing, fish-processing industries and tourism, thus causing economic hardship, as well as destabilizing food security for the one billion people dependent upon fisheries for their protein diet.

Ocean issues are global and affect all nations. Many developing nations, and particularly SIDS, still lack scientific and management technologies and knowledge to effectively manage their marine areas. Raising awareness of the impact of ocean acidification on SIDS and building their capacity to respond to the challenge of impacted marine ecosystems is a top priority of the Intergovernmental Oceanographic Commission of UNESCO (UNESCO-IOC). In an effort to increase awareness of this critical issue, the UNESCO-IOC has convened a series of symposia on “The Ocean in a High-CO2 World” and published documents describing the impact and options for remediation of the ocean acidification problem. For more information, go to UNESCO-IOC’s article.

(www.catlinarcticsurvey.com) – Research carried out at the Catlin Arctic Survey’s Ice Base in March and April 2010 suggests that melting sea ice is weakening the Arctic Ocean’s ability to capture and store atmospheric carbon. This study, carried out by a team at the Department of Fisheries and Oceans, 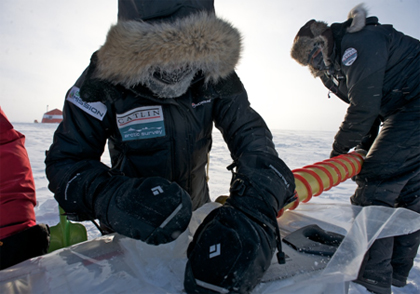 Canada, focuses on the efficiency of an important biological “pump” that captures atmospheric carbon near the sea surface and then draws it down and stores it on the sea floor. Phytoplankton (plant plankton), near the sea surface, capture atmospheric carbon and store it as non-sinking microscopic particles. Although these particles do not themselves sink, their sticky nature means they can capture heavier organic debris and become sufficiently dense that they fall to the ocean floor as “marine snow,” effectively removing significant amounts of atmospheric CO2 to the deep ocean for thousands of years.

The findings also show that carbon-rich gel-like particles (so-called “transparent exopolymer particles” or TEPs) are stored in the sea ice during winter and released into the water column during early spring. TEPs are an important feature in the carbon cycle as they both capture carbon and also give “marine snow” its stickiness, thus enabling it to attract organic debris and, therefore, sink. Future increases in surface freshwater from melting sea-ice will likely further strengthen water layering and could change carbon draw-down in the Arctic Ocean. Coupled with the continuing retreat of sea-ice, this has implications for the capacity of the Arctic Ocean to mitigate increasing atmospheric CO2 emissions via carbon capture.

The oceans represent the largest active carbon sink on Earth; they absorb more than one-quarter of the carbon dioxide humans emit into the air. According to a recent estimate, the Arctic is responsible for 5 to 14 percent of the world’s CO2 uptake, although it accounts for only 3 percent of its ocean surface area.

Oliver Wurl, Ph.D., who carried out this research, was part of an international team of scientists who lived and worked at the Catlin Ice Base on the Arctic Ocean, during the brutally cold winter-spring transition, as part of the Catlin Arctic Survey 2010 expedition. Wurl commented, “The data was really hard-won. Collecting sea water samples in -40°C is not something I would recommend to anyone, but to see this data forming part of an important jigsaw puzzle makes all the hardship worthwhile.”

The paper is published in the Journal of Geophysical Research. For questions or to obtain access to the full scientific paper, please contact Dominic Hilton at Tel 07786 321273 or at dominic@geomission.co.uk. For more information please visit www.catlinarcticsurvey.com. 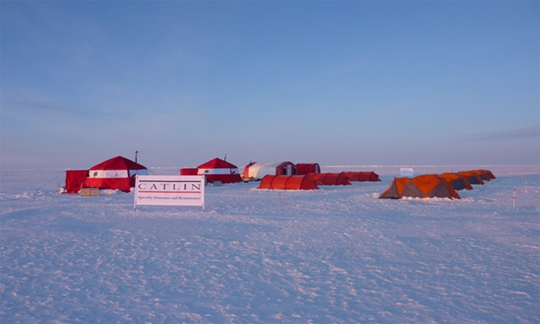 (www.nato.int) – The Pripyat River Basin between Belarus and Ukraine is prone to severe flooding, impacting local communities and economies. The basin includes the Chernobyl Exclusion Zone, and one of the river’s tributaries provides the Rivne Nuclear Power Station with cooling water, so effective monitoring is essential. Previously, monitoring was done by hand, which was too slow to give adequate warning and could not contribute to predicting flooding. This is changing thanks to a NATO-sponsored project, which is helping to establish an automatic, real-time monitoring system.

In early December 2011, Belarus opened its first automatic hydrometeorological monitoring station as part of the project. Ukraine opened its first two automatic stations earlier the same year in Lutsk, Volyns’ka Oblast, and in Hrenniki village, Rivne Oblast, to collect and send data every 15 minutes to the Volyn Hydrometeorological Centre. “The real-time monitoring system will make the data available globally and almost instantly to enable better preparations for the floods and determine ways of limiting the damage they cause,” says Susanne Michaelis, energy security officer at NATO’s Emerging Security Challenges Division. “It also eliminates the possibility for human error by recording the data directly electronically.”

Under the project, seven automatic stations will be installed and connected to the network by the end of 2012. In years to come, 70 stations will be needed so flooding can be identified and warnings given at an early stage. They will send information about water levels, air precipitation, and air and water temperatures to the hydrometeorological centres in Lutsk, Ukraine, and Brest, Belarus, and simultaneously publish the information online. Other measuring instruments could be added in the future, for example, for monitoring nuclear isotopes.

If the water rises significantly, immediate precautions can be taken and people living in the affected areas forewarned. With data available continuously, it also makes it much easier to uncover trends and to make better predictions, as well as to find ways of minimizing flooding effects. 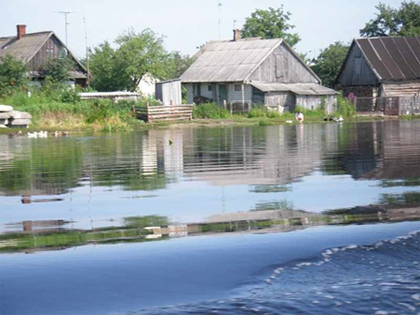 “It may be found, for example, that expanding certain wetland areas to absorb more water may decrease overall flood levels and damage,” says Michaelis. Flood monitoring in the Pripyat River Basin was identified as a priority issue for both Ukraine and Belarus by a 2006 survey of environmental security “hot spots” in Eastern Europe. The project is carried out with NATO support under the Environmental Security Initiative (ENVSEC), a partnership of six international organizations that provides an integrated response to environment and security challenges, and funded through NATO’s Science for Peace and Security Programme. For more information, visit www.nato.int/science.

(www.epa.gov) – As part of Administrator Lisa P. Jackson’s commitment to enhance the U.S. Environmental Protection Agency’s (EPA) chemicals management program and increase transparency, the Agency is making available to the public hundreds of studies on chemicals that had been treated as confidential business information (CBI). The move is part of EPA’s plan to make public chemicals not entitled to CBI status. Releasing the data will expand the public’s access to critical health and safety information on chemicals manufactured and processed in the U.S. Newly available information can be found using EPA’s Chemical Data Access Tool.

“EPA is increasing the availability of critical health and safety studies on chemicals that children and families are exposed to every day. We are making important progress in making this information public and giving the American public easy access to it,” said Steve Owens, assistant administrator for EPA’s Office of Chemical Safety and Pollution Prevention. “Over the next year, we expect to review several thousand additional studies on industrial chemicals and make many of these more accessible to the public.”

Consistent with the guidance, the Agency will request that the submitter voluntarily relinquish CBI claims and make the newly available studies available to the public. EPA also challenged the chemical industry to make available information previously classified as CBI. To date, more than 35 companies have agreed to review previously submitted filings containing health and safety studies and to determine if any CBI claims may no longer be necessary. The newly available information can be found under a new “declassified tab” using the Chemical Data Access Tool launched in December 2010 to assist the public in retrieving chemical health and safety information submitted to EPA under TSCA. For additional information, please visit the EPA’s Transparency page.