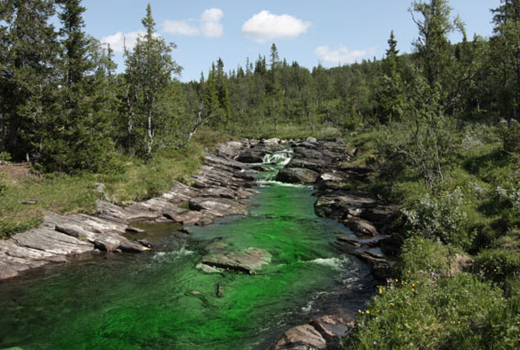 Aneed for swift action that satisfies immediate budget constraints often creates decision-making tension between present and future priorities. However, at the contaminated Frontier Fertilizer Superfund Site in Davis, Calif., a dedicated U.S. Environmental Protection Agency (EPA) clean-up team is proof that long-term sustainability and present priorities do not have to be mutually exclusive. Innovatively implementing a net energy-efficient electrical resistance heating system and completely offsetting the operation’s energy consumption with solar electricity generated on-site, EPA’s Frontier Fertilizer Site is a shining example of how efficiency minded, low carbon solutions can also be best for the budget.

“The Frontier Fertilizer Site itself is fairly small – only 18 acres – but it’s unique because the chemical quantities disposed of there were very large. Over time, a contaminated groundwater plume has migrated 600 feet north of the site beneath a nearby residential community,” explains Bonnie Arthur, EPA’s Frontier Fertilizer site manager. “From what we understand about the location’s history, it was used by several different companies for mixing pesticides and storing heavy farm equipment during the 1970s and early 1980s. But, no pesticides were manufactured there.” However, local farm workers used unlined holding ponds on-site to dispose of unused pesticide chemicals, she adds.

Now banned, these chemicals include1, 2-dibromo-3-chloropropane (DBCP), ethylene dibromide (EDB), 1,2-dichloropropane (DCP) and 1,2,3-trichloropropane. Considered contaminants of concern (COCs) these former soil fumigant pesticides have spread from the old ponds and tainted the groundwater in the surrounding area. Linked to human health problems, ranging from infertility and genetic abnormalities to cancerous cell growth, the groundwater chemical clean-up is critical. Fortunately, says Arthur, the City of Davis provides drinking water for the Site’s local residents from a much deeper and, as yet, uncontaminated aquifer. Nevertheless, the Frontier Fertilizer Site was added to the National Priorities List and designated a Superfund project in 1994 when EPA determined that hydrogeological connections between subterranean water-bearing zones create potential for future contamination.

“The Frontier Fertilizer Site is unique because no viable potentially responsible party (PRP) could be identified to work with in an oversight capacity,” explains Arthur. When a PRP is unidentifiable, EPA usually has to be involved both in funding and management capacities. “We were lucky with this site because we secured enough project funding for 15 years. In the 1990s, Superfund was independently funded, and money would have come from that account. However, funding is now budgeted from EPA’s general fund,” adds Arthur.

As part of EPA’s remedial actions at the site, a groundwater treatment plant has operated for more than 15 years. According to Arthur, “It’s a standard pump-and-treat facility utilizing active carbon to eliminate the COCs. We treat more than 2 pounds of COCs and 2.4 million gallons of water per month. And, throughout the lifetime of the project, 1,500 pounds of COCs have been treated.” 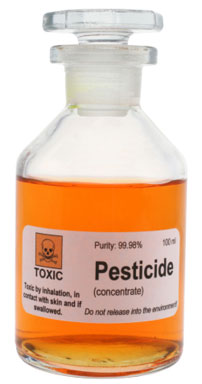 However, pumping water requires significant daily energy use. The site’s project management team kept diligent annual records of not only how much contaminated water was successfully treated but also how much electricity was expended during normal operations.

Using collected energy-use data, the site team developed a “to-do” or “hit list” to prioritize energy efficiency measures they wanted to implement over time. “We had the list running for probably eight to nine years,” says Arthur. “We couldn’t do it all at once. But, we were able to make significant improvements over time.”

For example, when the team realized a budget surplus seven years ago, they jumped on the opportunity to replace the plant’s old pumps with more energy efficient gravity flow pumps. That one change saves $7,000 in energy related operating costs annually.

Another team efficiency measure involved reutilizing the site’s land potential. A particularly attractive solution was to generate renewable electricity on-site. “We looked at a number of technologies and solutions before deciding on solar panels. In many ways solar is easier to justify because one can make an argument with real numbers. Realizing that a solar system will last at least 20 years, one can look at energy use over time and easily make a case for why it’s an efficient long-term solution. Our 2007 budget surplus provided the opportunity to install the first phase of the site’s current solar system,” explains Arthur.

The facility’s rooftop photovoltaic (PV) system consists of 30 Evergreen (190 W) panels generating 8,000 kWh/year. This initial system saved $1,500 per year on electricity costs and reduced the site’s greenhouse gas (GHG) emissions by four metric tons per year. “However, the initial system was relatively small and only offset electricity usage by 15 per cent in the peak-sun summer months,” explains Arthur.

In 2010, with the help of another budget surplus, the team pursued additional funding through the American Recovery and Reinvestment Act and installed a larger solar system, which completely offsets the plant’s energy footprint. It consists of 336 Evergreen (205 W) PV panels generating 101,125 kWh/year. Using site records of its annual $16,000 electricity bill, the team determined the second solar system would pay for itself and begin generating revenue in 14 years. Moreover, GHG emissions are reduced by 50 metric tons per year.

“We also recently initiated an electrical resistive heating system at the site,” says Arthur. This is where taking a big-picture perspective is absolutely crucial to prioritize sustainability measures over time. “While thermal treatment can look horrible due to huge amounts of electricity usage in the short-term – 2.5 MW during peak cleanup – we actually end up conserving a significant amount of energy over time because we can shut off these groundwater treatment plants much earlier. At the Frontier Site, we were looking at operating the groundwater treatment plant for 150 years. However, using the electrical resistive heating system, we’re able to reduce the clean-up’s timeframe to about 30 to 40 years.

“Looking toward the future, we can say for certain the reason why there isn’t a more highly concentrated pesticide plum beneath the Frontier Fertilizer neighborhood is because of our groundwater treatment plant. However, who knows what budget situations we’ll find ourselves in years to come. What if we can’t consistently cover the one-half million dollars per year operating costs? This is why we’ll be in a much better budget position the sooner we can shut off these treatment facilities,” explains Arthur.

Rusty Harris-Bishop, greener cleanups and communications coordinator for EPA Region 9 Superfund comments: “The Frontier Fertilizer clean-up team implemented efficiency solutions that weren’t just an easy plug-in or tag-on at the end of things. Instead of saying, ‘Let’s just put in a bunch of solar panels and we’re done,’ the team made a truly comprehensive effort. Conducting a system-wide analysis, they determined how to make operations as efficient as possible by meeting their needs only with power generated on-site. From a sustainability perspective, looking holistically at a system is important for making progress at a significant level.”

However, implementing longer-term focused changes is not always easy. “Because we have so many deadlines and so much regular work to do, everyone really needs to have commitment in addition to everything else,” says Arthur.

Harris-Bishop concurs, “That’s the take-away from the Frontier Site’s success. It takes a champion to implement these kinds of solutions. It’s so easy for somebody along the decision-making chain to say, ‘No,’ making it impossible to go forward. As a site manager, Arthur wouldn’t take ‘No’ from anybody. When the electricity company said they couldn’t provide the treatment plant’s necessary electricity, she said, ‘Well, then, I’ll just make my own electricity.’ That’s the kind of drive sometimes required to make a difference.” 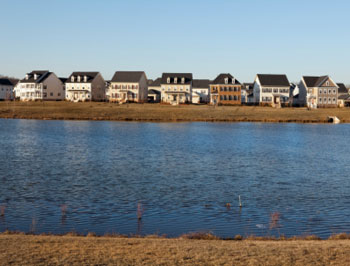 Arthur maintains that “one of my other big messages is that you have to make use of local communities, consider their priorities and work together where you have common ground. Oftentimes, reaching out to the community is something we can do to move innovative efficiency measures forward. Communities exist all around EPA’s Superfund sites, and we can team-up with them.”

In addition to working with the local community on the Frontier Fertilizer Site’s most recent solar installation, EPA has also collaborated on a groundwater reuse program for the water they treat. ”In this case, we looked at the community’s priorities and said, ‘How can we help the City of Davis cut their irrigation water usage?’” explains Arthur.

Partnering with local communities is actually an integral part of EPA’s Superfund guidelines. “One of the Superfund’s nine criteria is community acceptance, so we certainly take community engagement seriously,” says Harris-Bishop. “EPA Region 9 has probably been a leader in dealing with communities for a number of reasons. For one, we have a population in California that’s very involved and engaged in environmental issues. And, that makes a big difference. At times it can be a lot of work, but it’s part of being a Superfund site manager.”

Evolving toward more efficiency-minded practices can be difficult. Harris-Bishop explains, “We’ve found ourselves in a new landscape without policy direction on much of this. We have considerable encouragement and management support, but nothing exists that says, ‘You have to do this’ or ‘You can’t do this.’” As the learning curve adjusts, EPA is training site managers to consider innovative efficiency solutions and educating them about pitfalls and processes involved with implementing these changes.

“At EPA we get a chance to take a bigger picture look once in a while. One of the things to steer clear of is a tendency to be stove-piped and work on only one project. It takes a much broader perspective to say, ‘We’re cleaning up a site, but can we do this better?’ This mentality is growing more and more pervasive,” explains Harris-Bishop. He maintains that people now have an ability to recognize their impacts and to reduce them through innovative technologies and renewable energy.

“I also don’t think we had the environmental protection framework 20 years ago that we have now,” continues Harris-Bishop. “For example, we have a much better vocabulary to articulate environmental concerns, like emissions, because we more fully understand subsequent impacts.” 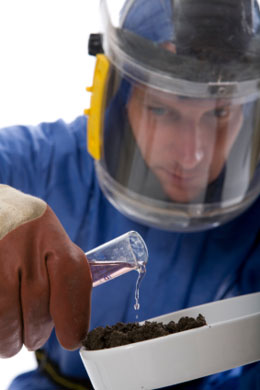 The Frontier Fertilizer Superfund site’s successes are applicable for other Federal departments and agencies. Harris-Bishop explains that “the three-year payback approach so common in the private sector is not necessarily applicable for EPA or the Department of Defense (DoD). Like EPA, the military branches have a much broader and longer-term perspective. They see their bases as something to sustain for all time. Looking at the Frontier Fertilizer Site from this perspective, why would we expect to break even on a solar installation in three years when we can do it in 10 and then have 20 additional years of free electricity to operate on?

“A paradigm shift is something that has to involve people outside EPA – utility commissions, energy commissions, utility companies, grid managers, etc. The lynchpin for further implementation of renewable energy and greater efficiency measures will be the successful integration of forward thinking stakeholders into the mix,” concludes Harris-Bishop.