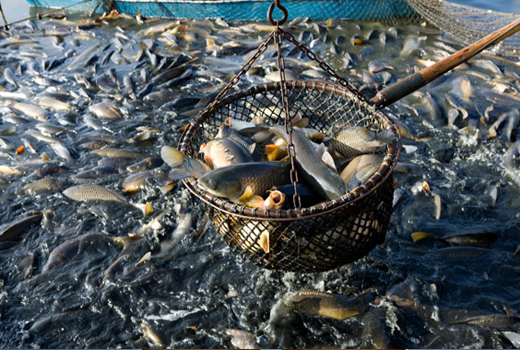 Approximately 20 percent of the world’s freshwater fish species have become extinct, threatened or endangered in recent years, and some 75 percent of the major marine stocks are either depleted, overexploited or being fished at their biological limit, according to the World Summit on Sustainable Development’s 2002 Johannesburg Report, “A Framework for Action on Biodiversity and Ecosystem Management.” Like it or not, humans have a life or death stake in fish habitats and fisheries worldwide because of the scope of their interdependence. As outlined by the University of Michigan via the following vital statistics, World Fisheries: Declines, Potential and Human Reliance:

The University also identifies the following fish and shellfish as being overfished:

University of Michigan experts explain, “The dates at which over-fishing began for various North Atlantic fisheries are alarming. From the table below, we can see that as we overfished one species, we simply moved to another and overfished that as well.” 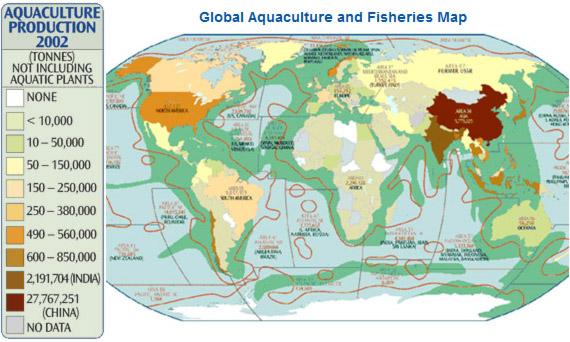 “Ninety-nine percent of the worldwide annual commercial ocean catch comes from coastal waters within 200 nautical miles of the coastline. These narrow coastal fringes are both the most productive and the most vulnerable.”
– UN World Water Development Report 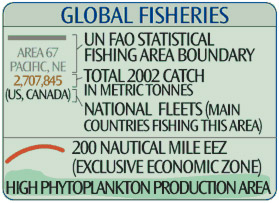 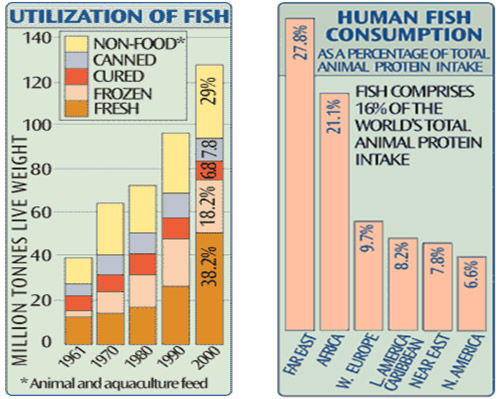 UN FAO: State of the World Fisheries and Aquaculture 2002, www.fao.org/fi/default.asp 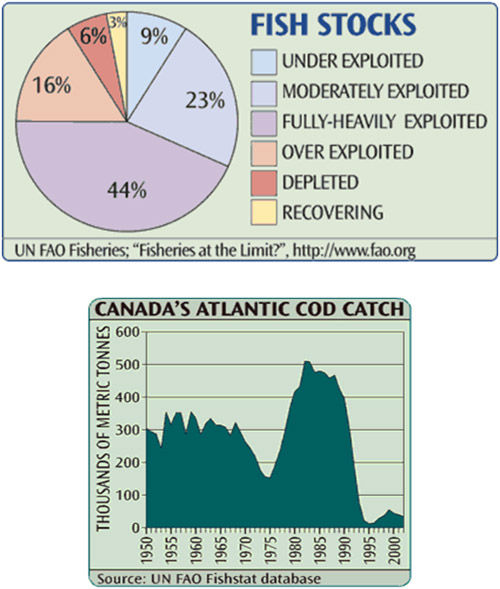 UN FAO: State of the World Fisheries and Aquaculture 2002, www.fao.org/fi/default.asp

In light of the above statistics and information, restoring fish habitant has become a vital function across the United States. From revamping fish passages to creating fish hatcheries that replicate natural conditions to rethinking dams, biologists, scientists and engineers are giving fish populations a renewed lease on life. In so doing, they are improving the quality of life for all inhabitants on Earth, which is why HDR, a leader is sustainable engineering, is taking an innovative problem-solving role.

The Silvery Minnow. The Rio Grande Silvery Minnow is an endangered species that has traditionally lived in the shallow channels of the Rio Grande. The New Mexico Interstate Stream Commission decided that a refugium was warranted, which would provide an opportunity for propagation and rearing of this finger-sized fish for later release into the Rio Grande at various life stages. HDR engineers and scientists worked together to retrofit a former fire station to accommodate the half-acre refugium on a 2.5-acre project site on state land between the Highland Canal of the Middle Rio Grande Conservancy District and Interstate 25, just south of Albuquerque. The site includes an office building and other ancillary facilities. Groundwater rights were transferred to the project along with existing infrastructure and security systems.

The aquatic environment-controlled rearing building includes multiple 40- to 50-gallon aquaria with process water where minnow eggs are fertilized and juvenile fish begin to grow without facing the threat of predators. When ready, juvenile fish are moved to round rearing tanks of either 42- or 72-inch diameter with water constantly circulating to simulate natural conditions of stream channels.

At various life stages, the minnows will be placed in the refugium, which incorporates a channel with overbank areas that can be flooded to simulate changing conditions in the natural river environment. Maintaining flows during key periods of the minnow’s regeneration cycle is critical to preservation efforts. To combat the challenges of limited water availability of 11 gallons per minute and a need for flow rates between one and four cubic feet per second, the team designed a 99.9 percent recirculating system. When the fish are determined suitable by the U.S. Fish and Wildlife Service, refugium employees collect the minnows for release into the Rio Grande.

The Wild Rose Hatchery. One restoration project, which increased the local inhabitants’ quality of life, was the Wild Rose, a central Wisconsin fish hatchery that was showing its age after more than 100 years. Wastewater discharge to a nearby Class 1 trout stream was also a cause of concern. The state decided to replace the facility based on the need to address comprehensive issues ranging from conservation to habitat improvement to state-of-the-art water treatment systems and bio-security. 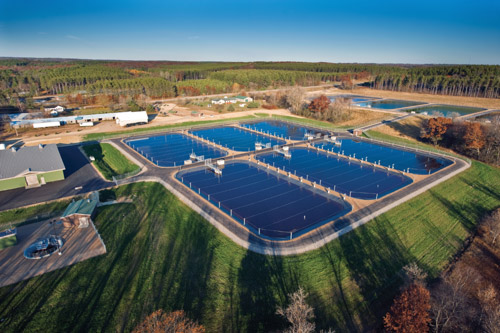 The hatchery features a bio-security system that isolates the egg handling room and modifies the coldwater building plumbing system to prevent potential contamination from passing into other portions of the hatchery. The constant cleaning and reuse of the water in the hatchery has significantly reduced the number of effluent discharge points and effluent loading levels discharged into the Pine River.

Fish aren’t the only species that benefit from the new facility. The Wild Rose hatchery is the backbone of Wisconsin’s $2 billion-plus sports fishing industry.

Fish Passage & the New Weber Dam. Named for the Lahontan Cut-throat Trout that swim in their neighboring river, the Agai-Dicutta Band of the Northern Paiute Nation resides on Nevada’s Walker River Paiute Indian Reservation. The Agai-Dicutta, which means “trout eaters,” were living with serous water restrictions since the 1989 discovery of a seismic fault running under the reservation’s Weber Dam. The Bureau of Indian Affairs’ (BIA) resultant high-hazard safety rating dramatically reduced the allowable reservoir storage volume. Until seismic deficiencies were corrected, the maximum allowable water level was lowered by eight feet, which reduced irrigation storage capacity to less than one-half the 10,700 acre-feet provided at normal maximum water level.

Fixing the dam became a high-priority. During the dam improvement project environmental review, U.S. Fish and Wildlife noted the original 1930s construction did not provide for upstream fish passage. Without fish passage, the endangered Lahontan Cut-throat Trout could not migrate past the dam for spawning. U.S. Fish and Wildlife mandated a plan for fish passage inclusion in the revised dam repair design. Based on needs outlined in an environmental impact statement, HDR was hired to design the fish passage.

Focused on restoring dam safety and trout prosperity, the new earthfill dam replaces the original one on an alignment that avoids the fault line and features a new roughened channel fishway. The fishway employs boulder weirs for energy dissipation and a vertical slot structure at the reservoir end to accommodate a wide range of reservoir water surface elevations. The 1,900-foot-long roughened channel required extensive excavation to achieve the desired slope for connection to Walker River downstream of the dam while highly erosive soil materials required careful attention to erosion control.

An unpaved road that crosses the crest of Weber Dam is an important transportation link between highways U.S. 95 and U.S. 95-Alternate, which serves as a critical route for emergency vehicles and a preferred route for reservation residents. This shortcut inspired an important feature of the fishway project – a pre-fabricated bridge specified to provide vehicle access over the fishway channel. The 68-foot long by 14-foot wide bridge accommodates one-way traffic with weathering steel chosen for the following compelling reasons:

The bridge deck is composed of galvanized steel with timber running planks for the wearing surface. The latter were treated and installed according to “Best Management Practices for the Use of Treated Wood in Aquatic Environments” to ensure environmentally friendly installation.

Focusing on natural solutions, the boulder weir fishway channel design closely mimics a natural river channel and minimizes landscape intrusion. Regional vegetative approaches were used for erosion control with cut slopes protected by willows and a hydroseed mix specifically blended to produce native species around the site. The tribe valued the preservation of the natural environment due to the river’s cultural significance and the heavy recreational use of the dam and fishway. 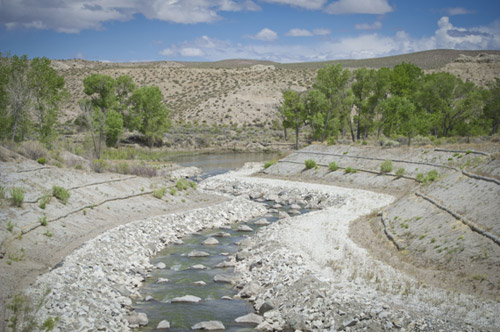 To effectively address the tribe’s needs, regular meetings were held with the tribal chairman to keep him informed of project status and upcoming events that may impact residents. The project team also closely collaborated with the Bureau of Reclamation’s water master, in charge of operating the dam’s water gates, regarding operational concerns and effects to irrigation during construction.

Returning Weber Reservoir to full capacity was a significant accomplishment for the tribe, which held a reception in its community center to celebrate the restored reservoir’s ability to improve their fishing and farming subsidence practices – practices which have continued for tens of thousands of years. Project Manager Mark Hassebrock explained, “The comments people made to me that day really demonstrate the direct connection between projects and people.”