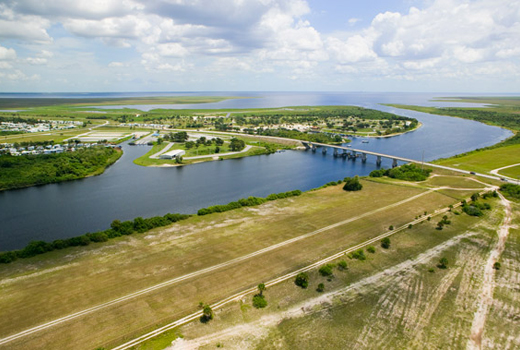 by Anwar Khan, Sr. Project Manager, HDR June 8, 2012 Comments Off on HDR’s Streamlined Site Selection Everglades Ecosystem Restoration  Features, Ecosystems
The Lake Okeechobee Watershed Project, which encompasses more than 2,300 square miles in south Florida, is a major component of the Comprehensive Everglades Restoration Plan (CERP). Because of the watershed’s sheer size – 1.2 million acres – the project team developed a GIS (geographic information system) spatial database to select sites for improvements, such as reservoirs and stormwater treatment areas. Information in this database was coupled with an ecological model developed by the U.S. Fish and Wildlife Service (USFW) to develop a Land Suitability Model (LSM), which incorporates critical land characteristics, such as wetland areas or real estate parcels as discrete data layers. While LSM-type GIS applications have been used on smaller projects, use on a project of this size was unprecedented. By using the interactive LSM tool, the planning team was able to pull the information together in less than one month, a process that could have taken up to six months. Working side-by-side, the project team and stakeholders selected more than 40 sites involving 33,000 acres. Using the LSM tool allowed the team to capture large amounts of data quickly and easily, and present it in a way people could understand and act on.

CERP is one of the largest and most expensive ecosystem restoration efforts in the world. It provides a framework and guide to restore, protect and preserve the water resources of central and southern Florida, including the Everglades. It covers 16 counties throughout an 18,000-square-mile area and includes more than 60 project elements. Current projections estimate it will take more than 30 years to construct, and the current estimate in today’s dollars exceeds $9.5 billion.

The Lake Okeechobee Watershed (LOW) Project is a major component of the restoration plan. Its objective is to identify cost-effective water management and water quality improvement solutions that will contribute toward holistic restoration of Lake Okeechobee. The latter is often described as the “liquid heart” of Florida’s Greater Everglades Ecosystem.

The U.S. Army Corps of Engineers (USACE) and South Florida Water Management District (SFWMD) are the two agencies leading the restoration effort. They engaged HDR to conduct a comprehensive water resources planning study, which included developing the GIS spatial database and model to select sites for improvements. The model was developed and used in an interactive public setting.

The Problems with Lake Okeechobee

Lake Okeechobee is the largest freshwater body in the southeastern United States with a surface area of approximately 730 square miles and an average depth of 8.6 feet. It serves as a critical link between the lakes and rivers that flow from the north, the St. Lucie and Caloosahatchee estuaries on the east and west, and the Everglades wetlands and bays to the south. Lake management impacts water supply, flood protection and the health of natural systems throughout South Florida.

The lake provides a number of benefits to society and nature, including water supply for agriculture, urban areas and the environment; flood protection; and a multi-million dollar sports and commercial fishery industry. It is also an integral component of the habitat for South Florida’s phenomenal array of wildlife, which includes wading birds, migratory waterfowl and numerous threatened and endangered species, such as the Everglades Snail Kite.

The natural resources of Lake Okeechobee have been adversely impacted by the frequency and duration of extreme high and low lake stages and inflow of nutrient-rich stormwater runoff from its watershed. The LOW project will contribute toward the holistic restoration of Lake Okeechobee by improving the timing and frequency of lake stages (through capture and storage of stormwater runoff in the watershed) and treatment of stormwater runoff (nutrient load reduction) prior to discharge into the lake. Storage of water in the watershed will also prevent permanent loss of precious freshwater resources to tide. A comprehensive planning study was undertaken by HDR’s water resources specialists to identify a recommended plan that would address these project objectives. 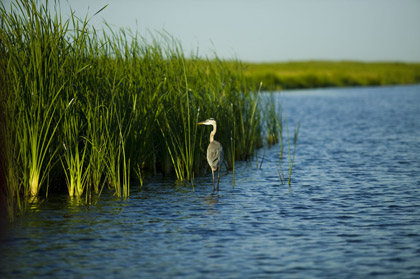 |The health of Lake Okeechobee has been threatened in recent decades by excessive nutrients from agricultural and urban activities in the lake’s watershed.

The major cause of Lake Okeechobee impairments is too much nutrient-laden stormwater runoff – primarily phosphorus – when it is not needed during the wet season and not enough when it is needed in the dry season. The logical solution, therefore, is to capture and store the phosphorus-rich stormwater runoff in the watershed during the wet season before it reaches the lake and, conversely, to treat the water and discharge it into the lake during the dry season. The planning team recommended above-ground reservoirs for storing the water and a stormwater treatment area for water quality treatment as the most cost-effective options.

Site-Selection on a Massive Scale

The next step in the planning process was to identify suitable locations within LOW to site the reservoirs and stormwater treatment areas. The siting process began with identification of a set of criteria to guide the selection process. Because of the watershed’s sheer size – 1,800 square miles or roughly 1.2 million acres – and the potentially large size of the structures being considered (some features were more than 10,000 acres), it was physically impossible to manually screen the study area using pre-determined siting criteria. To meet this challenge, HDR’s GIS specialists worked in close cooperation with federal and state regulatory agency biologists to develop the Land Suitability Model. This automated tool quickly and efficiently scanned the million-plus acre study area for desirable locations to site project features. Similar applications of GIS/LSM have been used on smaller projects but never on projects of this scale. Most ecosystem restoration focuses on hundreds or thousands of acres; it is unusual to encompass one million-plus acres in a single study.

LSM is a GIS-based, spatial data tool incorporating multiple land characteristics as discrete data layers. It allows for quick visual determination of land areas with minimal siting constraints. Model output is in the form of color-coded maps of the study area. Parcels with the fewest constraints were highly suitable for siting and shown in a light color. Locations characterized by numerous undesirable characteristics were shown in a dark color. 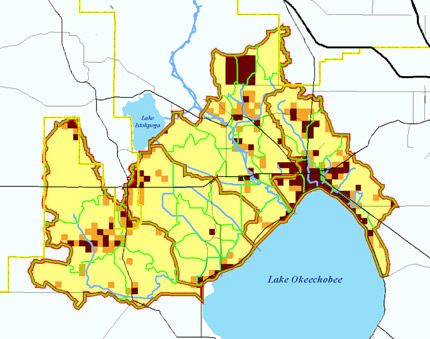 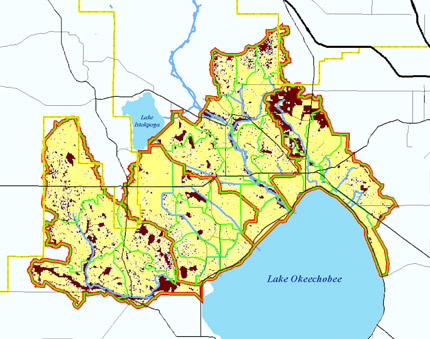 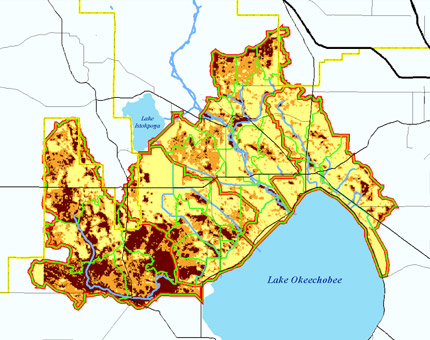 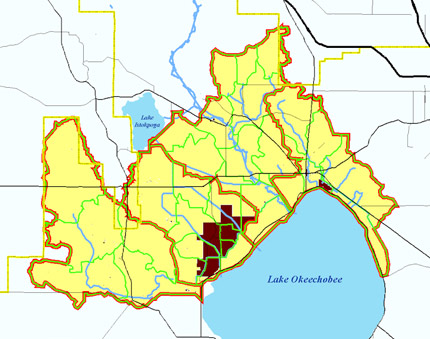 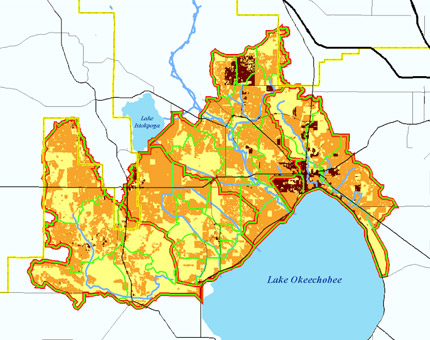 The output from LSM was a score of one to five that was assigned to each pixel (30 m X 30 m) within the study area based on the six siting constraint layers for that pixel. The score for each pixel reflected the extent to which its area was relatively free of siting constraints. Locations within the LOW project study area deemed suitable for siting recommended project features based on all six siting criteria taken together are shown as light-colored areas in the Land Suitability Model Output map. 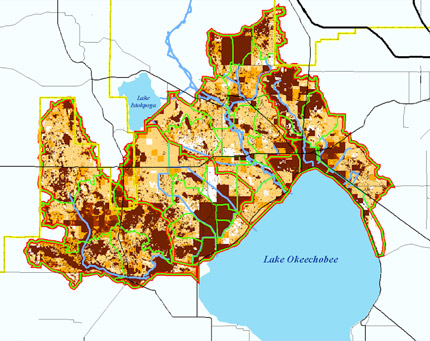 LSM was used at a two-day site selection workshop attended by more than 50 project team members and stakeholders. Overseen by a GIS professional, the LSM output layers were projected onto a whiteboard where participants could collectively agree on and draw in the boundary of an area that would be considered suitable for siting project features. If the details of a particular constraint layer were needed, the model allowed for individual layers to be viewed and analyzed by the workgroup. In several cases, participants who were familiar with the area were able to identify errors in the data layers or explain anomalies.

For example, some sections were identified as having prohibitively high parcel density. Workshop participants were able to point out that only a portion of the section was densely developed while the remainder was open. This interactive use of the GIS tool enabled participants to see in real time the location of potential areas considered during the siting process. The workshop resulted in selection of more than 40 sites encompassing approximately 200,000 acres, which were considered during the planning process.

By using the interactive LSM tool, the planning team was able to pull the information together in less than one month, a process that could have taken up to six months. By using the tool in a pubic setting, it promoted stakeholder buy-in. Another beneficial outcome was the ease with which the results could be duplicated, thereby making it easier to validate decisions made.

A Model for Future Restoration

In summary, using the LSM tool allowed the team to capture large amounts of data quickly and easily, and present it in a way people could understand and act on in a collaborative manner. Without an automated tool, screening of the million-plus acre study area would have to be conducted manually, which would have taken months and cost substantially more. Use of the LSM resulted in savings of time and money, and promoted stakeholder buy-in on a key Everglades restoration project. Using the tool in an interactive public setting was positively received by the stakeholder community. In fact, one of the workshop participants commended the project sponsors for conducting the analyses in a true cooperative spirit.

The success of the Lake Okeechobee Watershed LSM workshop was the basis of SFWMD deciding to use LSM for another large ecosystem restoration effort in Florida, the Northern Everglades Ecosystem Restoration Plan. 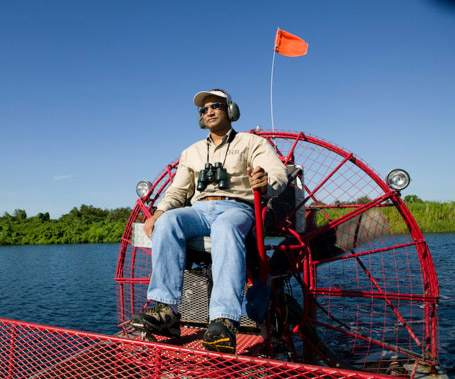 Anwar Khan is a National Ecosystem Restoration Practice Leader with HDR, Inc. He has been involved in Everglades restoration for more than one decade. As project manager and water resources planner, Khan has led several large, multi-disciplinary teams in implementing ecosystem restoration projects at locations throughout the U.S. and overseas. His current assignments include managing a large and multi-faceted coral reef ecosystem restoration project in the Pacific Island of Guam. HDR is a global, employee-owned firm that is actively involved in seven of the 10 largest ecosystem restorations currently ongoing in the United States. The company provides architecture, engineering, consulting, construction and related services through its various operating companies. Its more than 7,800 professionals are committed to helping clients manage complex projects and make sound decisions. For more information, go to www.hdrinc.com. Information for this article was provided by the Comprehensive Everglades Restoration Plan official website, the South Florida Water Management District and the Everglades Foundation.