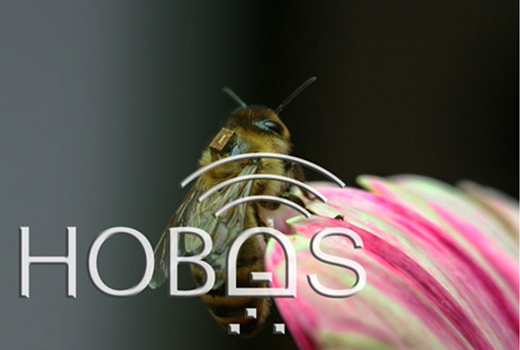 General education is a process crucial to humanity’s future progress as it offers skills necessary for the success of individuals and of societies, including enhancement of the ability to:

The goal of the United Nations’ Decade of Education for Sustainable Development (2005-2014), for which UNESCO is the lead agency, is to integrate the principles, values and practices of sustainable development into all aspects of education and learning. This educational effort will encourage changes in behavior that will create a more sustainable future in terms of environmental integrity, economic viability and a just society for present and future generations.
In 2009 the Honeybee Online Studies (HOBOS) Project at Wuerzburg University in Wuerzburg, Germany became an “official UNESCO project.” This inquiry-based, interdisciplinary teaching tool allows students to dive online into a living honeybee colony to understand the integrative nature of life and learning.
Tell me, and I will forget; Show me, and I may remember; Involve me, and I will understand. -A Chinese Proverb on Education

These abilities create the foundation upon which all further studies build; therefore, no one can reasonably object to these statements, which are so easy to formulate. However, it is more difficult to answer the question of how to approach these goals. Which teaching/learning strategy is most useful? Which projects are more beneficial to implement?

To answer the first question, our focus will be on exploratory learning. Exploratory learning is a ground-breaking educational concept based on the acquisition of information or behavioral modification as a result of experience. Exploratory learning not only follows the goals we list for general education above, but it also improves one’s powers of observation. For successful exploratory learning, the right tools are essential. Computer simulations are suitable, in-fashion tools as they allow access to an unlimited number of users. But, simulations produce few surprises and the motivation to make new discoveries is low. Studying actual, natural systems would be ideal, but would create a division of students with different opportunities, i.e. those with access to laboratories and relevant set-ups and those without.

To answer the second of the above questions: HOBOS offers the best of these two tools and avoids the disadvantages by employing the computer and the internet. HOBOS makes possible live observations and in-depth study of a highly complex superorganism – the colony of a honeybee. This unique program generates problem-solving skills at all levels, from pre-school to university. It is perfect for interdisciplinary study and research. And, it can be used for projects conducted by individuals as well as projects comprised of tasks distributed by a team of researchers.

Dive online into a living honeybee colony and

After all this praise, it is time to introduce HOBOS in detail. The core of the HOBOS project are living honeybee colonies, which as superorganisms are among the most complex, but also the most fascinating and important life forms on earth. To watch them even for a short period raises the curiosity of the spectator who wants to learn more about them. Therefore, motivation is NOT a problem when dealing with HOBOS.

Below is justification for choosing honeybees for this learning project, rather than another living organism.

At the outset of the HOBOS project are webcams, which show colony entrance and all events happening there (in– and out-traffic of bees, communication, meeting of foreign bees, behaviour against intruders, etc.). They also show the sky and vegetation in the vicinity of the HOBOS colonies.

The webcams use thermovision technology, which allows for temperature study of different bee body parts during all actions they perform at the entrance. In addition, two locations inside the colony show all indoor bee behaviours using a light wavelength indiscernible to bees so they are not disturbed. 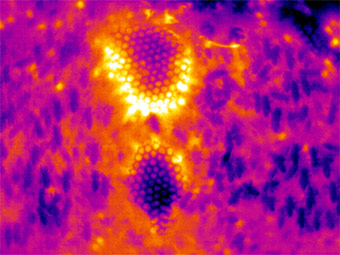 The multi-faceted HOBOS approach allows for very complex post-graduate studies or simple projects easily understood and applied by pre-school children. The latter might include: How bright does it need to be outside before the first bees leave the colony in the morning? Do bees ever leave the hive at night? What happens inside the colony when bees are swarming outside?

More than a typical webcam project, HOBOS offers an endless data stream from the following four primary sources: a.) bee colony, b.) weather and soil, c.) vegetation and d.) individual bees. To appreciate the relevance of these data streams some background information on honeybee biology might be helpful, but is not required. With HOBOS a student can either confirm what is already known or make totally new assumptions and discoveries. In addition, data streams have been and continue to be continuously stored on powerful servers throughout the years, thus enabling both historical and live real-time information sharing.

Answers from these data sets may constitute a totally new scientific breakthrough. The lists of questions for scientific development are endless and could include, for example:

Obviously, the questions and study areas are only limited by one’s imagination, thus allowing for highly specific and custom-oriented study programs. 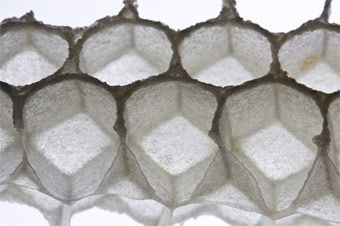 The HOBOS team makes constant suggestions on what to study with the life colonies, in addition to developing packages of texts, photos and video-clips as background information to the events and processes HOBOS transmits from the honeybee colony. The program continuously supplies online data from the honeybee hives ranging from simple information to in-depth studies of the highest order and ambition. As mentioned, users can either follow suggestions on projects at various difficulty levels provided by the HOBOS staff, or they can follow their own study agenda with any question or questions they are interested in. Thus, HOBOS allows for a range of projects from simple and very time-limited to highly complex and scientifically ambitious. In addition, projects can be followed over years, which make the process even more interesting, challenging and rewarding.

And, HOBOS is not a pure biology project. The honeybee-supplied data streams are especially useful mathematics teaching tools ranging from simple calculations to very complex graph analysis to all levels of statistical difficulty and graph constructions.

The complex superorganism honeybee colony is an excellent source for data mining, thus providing teaching and training in this sophisticated methodology. A stock market cannot be more complex. In addition, HOBOS offers links and connections to further disciplines, such as physics, chemistry and technology.

This makes HOBOS a truly interdisciplinary teaching tool, which opens up options the student may not have previously considered – all thanks to the instant interest and primary motivation resulting from the fascination of a living honeybee colony. 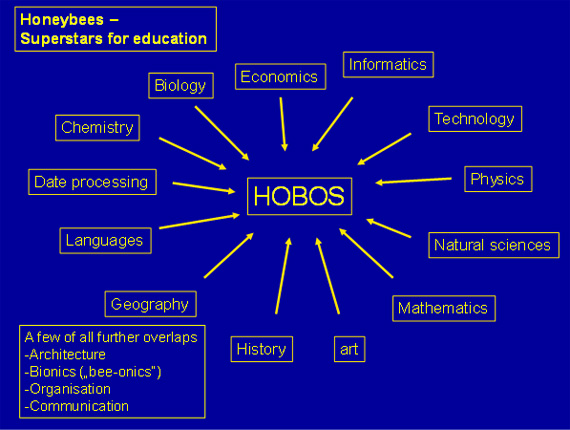 The list of countries using/interested in using HOBOS to teach K-12 science, technology, engineering and math (STEM) concepts and skills within a sustainable environment continues to grow every day. According to Professor Tautz, the newest countries with interest include Chile, Czechia, Slowakia and Jordan. In fact, HOBOS is privileged to have H.R.H. Princess Basma bint Ali of Jordan as an outstanding patron. Her Royal Highness is a world-renowned, respected environmental advocate who is known to be a diligent worker for the future of nature and mankind. HOBOS is expected to officially start in Jordan on July 2, 2011, with its first two partner schools, the Baptist School of Amman in Jordan and the Friedrich Koenig Gymnasium in Wuerzburg, Germany. Dr. Nizar Haddad, the bee research unit director of Jordan, will supervise the project in Jordan and the Arab countries. 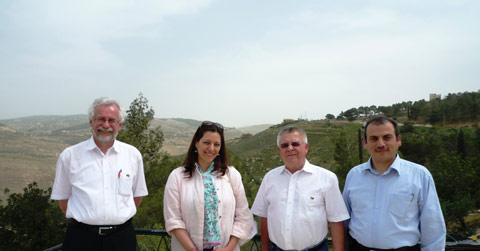 |Teaming up for HOBOS: H.R.H. Princess Basma bint Ali from Jordan, patron of the international HOBOS project, standing with Prof. Jüergen Tautz (left), founder and director of the HOBOS project, Ernst A. Hestermann (2nd from right), manager of HOBOS and Dr. Nizar Haddad (right), HOBOS supervisor in the Arab world.

HOBOS’ international presence provides sponsors an opportunity to reach and to influence K-12 and post-secondary youth across the globe. For more information on becoming a HOBOS sponsor, please contact Tautz via email at Tautz@biozentrum.uni-wuerzburg.de or via his contact information below: