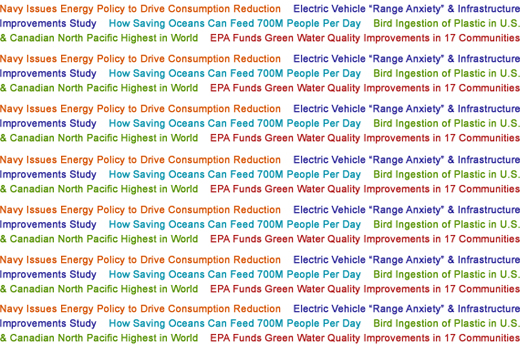 by admin August 6, 2012 Comments Off on Information of Interest, Aug 2012  Departments, Worth Knowing

(www.navy.mil) – The U.S. Navy issued a new energy policy that will drive energy consumption reduction at all Navy installations, transform shore energy culture and seek new or existing technical solutions for reducing energy. The Shore Energy Management Instruction signifies a complete revision from the previous version published in 1994. The instruction codifies Navy’s policy and strategy to ensure energy security as a strategic imperative, to meet federal mandates and executive orders, and to achieve Department of the Navy (DoN) shore energy goals.

Since naval forces require constant support from shore installations, the Navy is mitigating its vulnerabilities related to the electrical grid, such as outages from natural disasters and man-made events, by lowering consumption, integrating renewable energy sources and increasing control of energy supply and distribution. Energy reliability, resiliency and redundancy are essential components of the Navy’s Critical Infrastructure Protection program.

“Energy security is critical because warfighters need assured access to reliable supplies of energy to meet operational needs afloat or ashore,” said Deputy Chief of Naval Operations for Fleet Readiness and Logistics, Vice Adm. Phil Cullom. “This instruction is just one example of how we are driving a spartan energy ethos in our shore operations. We are committed to cost-effectively achieving our energy goals by pursuing energy efficiency, transforming our energy culture and integrating renewable energy technologies where viable.”

The revised instruction includes specific responsibilities and actions that commands and personnel ashore must take in implementing the Navy Shore Energy program. For example, each Navy installation will have a tailored energy consumption reduction goal based on its unique energy situation. By increasing energy efficiency, the Navy can reduce operating costs, multiply the impact of current and future alternative energy sources and achieve DoN renewable energy targets.

(www.globaldata.com) – Electric vehicle (EV) drivers suffer from fear of being stranded as charging facilities leave much to be desired, claims a new study by power experts GlobalData. The convenience of simply filling a vehicle with fuel encourages use of Internal Combustion Engine (ICE) cars, as an electric vehicle can take five to six hours to recharge using charging stations primarily found within the EV owner’s residence for overnight use. Fast-charging stations, which can charge EVs within minutes, are scarce, but such enhanced charging infrastructure is vital to encourage use of EVs for long journeys.

Among the barriers to EV adoption, the one which most affects consumers is fear of running out of power due to a depleted battery. This stems from worries related to long charging processes, poor battery performances and inaccessible charging infrastructures. These factors are restricting use of EVs on a large scale, and research also showed that vehicle drivers frequently recharged their vehicle even when they had a considerable amount of power left in their batteries due to this fear, thus compounding the already heavy effects of EVs on the grid. However, as mentioned, concerns can be reduced by installing next generation charging stations and by expanding charging infrastructure. Forthcoming advancements in battery technology, charging stations and electric vehicles are likely to diminish range anxiety among drivers.

EV charging stations are primarily found in the residences of EV drivers while public charging stations are almost absent along highways in many countries. This is keeping EV drivers from using their vehicles for long journeys, which is making a significant impact on EV penetration. In order to overcome this problem and to promote use of EVs, governments, utilities and private organizations across the globe are undertaking projects for the installation of charging infrastructure.

The EV infrastructure network in the U.S. is expected to serve about two million EVs by 2020. Next generation charging stations represent a promising opportunity to push forward EV penetration. The Washington State Department of Transportation (WSDOT) has awarded a contract to Aerovironment to install a network of charging stations linking Washington to Oregon and Canada, with charging stations deployed at shopping malls and petrol stations able to fully charge an EV within 30 minutes. The EV charging infrastructure along the highway connecting Washington and Oregon is another important part of the upcoming West Coast Green Highway project, as the fully installed infrastructure will extend about 1,350 miles along I-5 highway connecting three states and three countries.

AAA, a pioneer in smart grid and green technology, is also planning to deploy roadside mobile trucks endowed with charging stations in Portland, Seattle, San Francisco Bay Area, Los Angeles, Knoxville and Tampa/St. Petersburg. Outside the U.S., a major EV infrastructure project is being undertaken by Ecotricity, which is deploying green-energy powered charging stations to help mitigate range anxiety and to enhance EV adoption in Britain. The infrastructure is currently being installed at every “Welcome Break” motorway service station as well as in other key locations. The charging stations will receive electricity generated from wind and solar parks present across the country to fuel depleted batteries.

(oceana.org) – Oceana unveiled a report outlining how saving the world’s oceans can help to feed the nine billion people projected to be on earth by 2050. The report explains how implementing science-based fisheries management in the 25 countries that control more than 75 percent of the world’s fish stocks – measures to reduce overfishing, to protect habitat and to limit bycatch – will increase fish stocks to the point that wild seafood could sustainably feed 700 million people per day. Putting in place these policies in the countries that control most of the world’s marine fish catch will also help protect important ocean ecosystems.

The United Nations estimates food production will need to increase by 70 percent to meet a forecasted increased demand for the world’s growing population. This dramatic growth in people and demand is occurring when arable land and fresh water needed for food production are becoming increasingly scarce. At the same time, overfishing is limiting the oceans’ ability to help solve the global hunger crisis. Fish stocks have been exploited to the point that they can’t recover on their own. As a result, global fish catch has been in decline since the late 1980s despite better technology and more boats on the water.

Policy solutions protecting wild fish stocks can be applied on a country-by-country basis without requiring action by more complicated international bodies or laws. The 25 countries that control more than 75 percent of the world’s fish stocks are also home to more than one-half of the world’s people suffering from hunger. Case studies show science-based management can allow fish stocks to rebound while simultaneously providing protection for important ocean ecosystems, habitats and biodiversity.

(www.abcbirds.org) – A new study by U.S. and Canadian scientists has found seabirds may be eating much more plastic trash than they have in the past, and seabirds studied off the coast of Washington State and British Columbia are ingesting plastic at rates that are “among the highest” in the world. The report, soon-to-be published in the Marine Pollution Bulletin, was authored by Stephanie Avery-Gomm of the University of British Columbia and five other researchers (see list below). The study was carried out in 2009-2010 and involved analysis of 67 Northern Fulmars that washed up dead on the shores between Long Beach, Washington, and Vancouver Island, British Columbia.

Northern Fulmars, gull-like petrels related to albatrosses and shearwaters, are particularly suitable to study when considering trends in plastic pollution because they forage almost exclusively at sea, have vast ranges and forage almost anything from the water’s surface.

“The results are troubling. The large amount of ingested plastic is approaching the high levels previously documented in the historically polluted North Sea where fulmars have been used as an indicator species of ocean health for decades. It is safe to say . . . plastic pollution has increased in the North Pacific throughout the past forty years. The science on this issue is still being refined; there’s much we don’t know about the impacts of plastic ingestion on birds in general and Northern Fulmars in particular. We do know plastic in the stomach displaces the space for food the birds need, and plastic can lacerate the stomach lining. Some birds we looked at had their gizzards completely full with plastic. We also know plastic in the sea absorbs an astounding level of contaminants in a very short time, and these contaminants may leach out in a bird that swallows it,” said Avery-Gomm.

“Effective stormwater management is one of the most widespread challenges to water quality in the nation. Polluted stormwater can be harmful to the health of our nation’s waterbodies,” said EPA’s Acting Assistant Administrator for Water, Nancy Stoner.

EPA is awarding the funds to diverse communities throughout 16 states. Some communities, like Beaufort, South Carolina, and Neosho, Missouri, are small towns in urban growth areas interested in preserving and protecting their healthy waterways. Others, such as Camden, New Jersey, and Pittsburgh, Pennsylvania, are large cities interested in adding green infrastructure into their redevelopment projects to restore degraded urban waters and to help revitalize their communities. The selected communities also provide an opportunity to demonstrate the potential of green infrastructure across a range of climate zones.