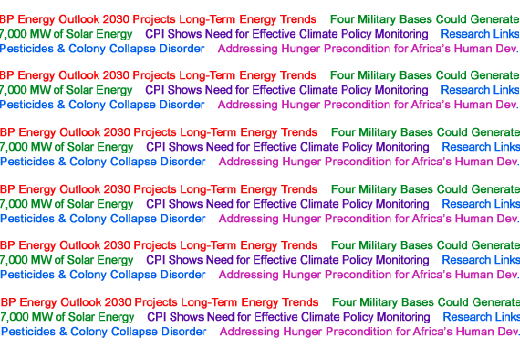 by admin July 7, 2012 Comments Off on Information of Interest, July 2012  Departments, Worth Knowing

(www.bp.com) – BP’s Energy Outlook 2030 “highlights the growing role of developing economies in global energy consumption and the increasing share of non-fossil fuels in global energy supply. It emphasizes the central role markets and well-designed policy can play to meet the dual challenge of solving the energy needs of billions of people who aspire to better lifestyles and doing so in a way that is sustainable and secure. It also notes the uncertainties attached to any long-term projection. . . . the sharp numbers are less important than the underlying story of the challenges we all face and the choices we make in producing and consuming energy.”

According to the BP Energy Outlook booklet (see also the Energy Outlook 2030 summary tables and the Energy Outlook info graphic), the “key assumptions are population and GDP growth, and a key outcome is accelerating energy efficiency. Non-OECD economies drive energy consumption growth as the fuel mix gradually shifts away from oil and coal. Fuel substitution is the main story in the OECD while the non-OECD sees all fuels expanding. The growth of energy consumption by sector is dominated by power generation and industry. Strong growth in power generation continues with lower carbon fuels gaining market share. Convergence of energy intensity and fuel shares will be the dominant trends.

“Liquids demand growth from non-OECD countries will be met by supply growth from OPEC and the Americas. Liquids demand growth is driven by non-OECD transport while OECD demand falls across all sectors. OPEC’s critical position in the oil market grows while the Americas also play an expanding role. The implications for refining are stark with refinery throughputs likely to grow only modestly. Natural gas demand growth is concentrated in the non-OECD with LNG playing a growing role in supply. Natural gas demand growth is supported by fuel substitution as gas gains market share against coal and oil. Unconventional gas will play a growing role especially in North America and Asia. Coal consumption levels off after 2020 as China shifts to a less coal-intensive economy. Non-fossil fuels growth is led by renewables in the OECD while all sources grow rapidly in the non-OECD. The increasing share of renewables in power and transport is constrained primarily by the cost of scaling up.

“The pace and scale of development in India and China play a major role in shaping the global outlook. The surge in China’s energy consumption slows and is not repeated in India. China and India follow a historical pattern of development but from different starting points. Industry causes energy demand to decelerate as the fuel mix diversifies away from coal.

“Vehicle numbers are set to grow rapidly in the Non-OECD while OECD growth slows due to saturation. Transport fuel demand is met predominantly by oil with fuel growth slowing as vehicle efficiency improves. Policy and technology enable efficiency improvements as the vehicle fleet gradually shifts to hybrids. Efficiency gains have the biggest impact on oil demand, but alternative fuels may play a greater role post 2030.

“Quantifying and benchmarking ‘business as usual’ trends helps to illustrate the uncertainties around any outlook. Energy imbalances improve in the Americas but worsen in Europe and in Asia Pacific. Import dependency rises in Asia and Europe and falls in the U.S. Carbon emissions growth slows, but more action is needed to get emissions falling by 2030.”

(www.serdp-estcp.org) – The Department of Defense (DoD) could generate 7000 megawatts (MW) of solar energy – equivalent to the output of seven nuclear power plants – on four military bases located in the California desert, according to a study released by DoD’s Office of Installations and Environment (Full Report and Executive Summary available). The year-long study looked at seven military bases in California and two in Nevada. It finds that even though 96 percent of the surface area of the nine bases is unsuited for solar development because of military use, endangered species and other factors, the solar-compatible area is nevertheless large enough to generate more than 30 times the electricity consumed by the California bases or about 25 percent of the renewable energy that the State of California is requiring utilities to use by 2015. The Department of Defense is seeking to develop solar, wind, geothermal and other distributed energy sources on its bases both to reduce their $4 billion-a-year energy bill and to make them less dependent on the commercial electricity grid. Such on-site energy generation, together with energy storage and so-called smart-microgrid technology, would allow a military base to maintain its critical operations “off-grid” for weeks or months if the grid is disrupted.

The study concludes that 25,000 acres are “suitable” for solar development and another 100,000 acres are “likely” or “questionably” suitable for solar. The study assumed that 100 percent of the “suitable” land and 25 percent of the “likely” or “questionably” suitable land would be developed for solar energy. The largest amount of economically viable acreage is found at Edwards Air Force Base (24,327 acres), followed by Fort Irwin (18,728 acres), China Lake (6,777) and Twentynine Palms (553 acres). Little or no economically viable acreage exists on the other California bases (Barstow, El Centro and Chocolate Mountain) or the two Nevada bases, principally because the military’s use of the land is incompatible with solar development.

Finally, the study finds that private developers can tap the solar potential on these installations with no capital investment requirement from DoD, and the development could yield the federal government up to $100 million a year in revenue or other benefits such as discounted power.

(climatepolicyinitiative.org) – Climate Policy Initiative (CPI) has completed an analysis, Tracking Emissions and Mitigation Actions – Current Practice, Evaluation and Factsheet, of national systems that track emissions and activities to reduce emissions in the U.S., Germany, Italy and China. The analysis revealed that existing systems allow these nations to determine if they are meeting their emission reduction targets but do not allow them to identify which of their policies are most effective and efficient.

“As the adage goes, you can’t manage what you don’t measure,” said Kathy Rowley, director of CPI San Francisco. “Strong monitoring, reporting and verification systems of emissions and activities to reduce emissions are crucial for focusing political and financial capital where it will deliver the best results.”

(www.beyondpesticides.org) – Three studies released early 2012, including one by Harvard University, add to the growing body of evidence that implicates pesticides, specifically neonicotinoids, as one of the most critical factors contributing to Colony Collapse Disorder (CCD), thus bolstering the need for regulatory action. The research is timely as beekeepers and environmentalists recently filed a legal petition with EPA calling for the suspension of the neonicotinoid pesticide clothianidin. At a time when beekeepers are losing on average more than one-third of their hives annually, which is costing rural economies millions of dollars, pesticide manufacturers are attacking the science in order to delay regulatory action.

One of the Science articles recently released shows that sub-lethal neonicotinoid exposure disrupts honeybees’ foraging and homing abilities. The other shows that environmentally relevant neonicotinoid exposure causes an 85 percent reduction in the number of queens produced. The Harvard study, In Situ Replication of Honey Bee Colony Collapse Disorder, was done by Chensheng Lu, Harvard School of Public Health, and Kenneth M. Warchol and Richard A. Callahan, both from the Worcester County Beekeepers Association.

Their in situ study was “designed to replicate CCD based on a plausible mechanistic hypothesis in which the occurrence of CCD since 2006 was resulted from the presence of imidacloprid, one of the neonicotinoid insecticides, in high-fructose corn syrup (HFCS), fed to honey bees as an alternative to sucrose-based food. We used a replicated split-plot design consisting of four independent apiary sites. Each apiary consisted of four different imidacloprid-treated hives and a control hive. The dosages used in this study were determined to reflect imidacloprid residue levels reported in the environment previously. All hives had no diseases or symptoms of parasitism during the 13-week dosing regime and were alive 12 weeks afterward.

“However, 15 of 16 imidacloprid-treated hives (94 percent) were dead across four apiaries 23 weeks post imidacloprid dosing. Dead hives were remarkably empty except for stores of food and some pollen left, a resemblance of CCD. Data from this in situ study provide convincing evidence that exposure to sub-lethal levels of imidacloprid in HFCS causes honey bees to exhibit symptoms consistent to CCD 23 weeks post imidacloprid dosing. The survival of the control hives managed alongside with the pesticide-treated hives unequivocally augments this conclusion. The observed delayed mortality in honey bees caused by imidacloprid in HFCS is a novel and plausible mechanism for CCD and should be validated in future studies.”

According to Heather Pilatic, co-director of Pesticide Action Network, “The weight of the evidence is tipping for neonicotinoids as a critical factor in colony collapse disorder. While pesticides are not the only problem for honey bees, we know enough to act.”

Nine years ago, EPA required a field study examining clothianidin impacts on non-target insects because they had reason to believe it may harm pollinators. In 2010, EPA considered Bayer’s field study to be flawed and inadequate, thus beekeeper and environmental organizations wrote to Administrator Lisa Jackson urging immediate action. EPA’s lack of response motivated the filing of the formal legal petition to suspend further use of clothianidin and to ensure similar pesticides are not approved by the agency.

Arguing that action focused on agriculture alone will not end food insecurity either, the Report calls for new approaches covering multiple sectors from rural infrastructure to health services to new forms of social protection and empowering local communities. Ensuring that the poor and vulnerable have greater voice through strengthened local government and civil society groups is also needed to ensure food security for all.

Food security, as defined by the 1996 world leaders’ Food Summit, means that people can consistently access sufficient and nutritious food to meet their dietary needs for an active and healthy life at a price they can afford. While acknowledging there are no quick fixes, the report argues that food security can be achieved through immediate action in four critical areas:

Increasing agricultural productivity: With a population projected to exceed two billion sometime after 2050, Sub-Saharan Africa will need to produce substantially more food while mitigating the stresses which agricultural production places on the environment. Ending decades of bias against agriculture and women, countries must put into place policies that provide farmers with inputs, infrastructure and incentives enabling them to lift productivity.

Building resilience: Getting food from field to table in Sub-Saharan Africa is fraught with risk. Countries should take measures to lower people’s and communities’ vulnerability to natural disasters and civil conflict, seasonal or volatile changes in food prices and climate change.

The Report recommends social protection programmes, such as crop insurance, employment guarantee schemes and cash transfers – all of which can shield people from these risks and boost incomes.

Empowerment and social justice: Achieving food security in sub-Saharan Africa will remain out of reach so long as the rural poor, and especially women who play a major role in food production, do not have more control over their own lives, the Report says. Ensuring access to land, markets and information is an important step to empowerment. Bridging the gender divide is particularly vital: When women get access to the same inputs as men, yields can rise by more than 20 percent.

The challenge is large, the time frame is tight and the investment required is significant, but the potential gains for human development in the region are immense, the Report says.