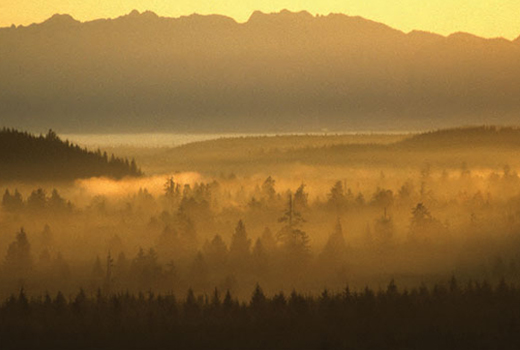 To the Indian people of the Quinault Nation in Washington State, the cedar tree is the “tree of life” because it is fundamental to every aspect of their existence. From its wood the Quinault people build houses and dwellings as well as carve canoes for fishing. The cedar bark is used to make clothing while its roots make baskets. Still other parts of the “tree of life” become art and objects used in religious ceremonies. “The cedar is treated with respect,” explained Gary Morishima, a natural resource technical advisor with the Quinault Indian Nation. The tribe balances its needs with those of the forest. Before gathering cedar bark, they ask the permission of the cedar. They take only a part of the bark and leave the rest for the tree to sustain its life.

Constantly and for generations, the Quinault people and other tribal nations throughout the Americas managed the forests to maintain a state of balance and adaptation with the world.

Cal Mukumoto, a forest business management consultant who has worked with Indian tribes for decades, believes that this tribal “balance” is paramount and, quite possibly, the answer to a future of environmental sustainability. “Tribes embody the whole concept of sustainability and what it really means,” Mukumoto said. “Tribes really have a sustainable viewpoint.”

Fire and the Tribal Way 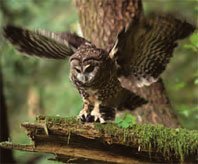 Some conservationists and environmental activists believe that true sustainability and preservation of America’s forests depends upon the absence of man. This ideology is based upon the precept that nature completely maintains itself and that man serves only as interference to nature’s plan. However, the Americas were not the desolate, unkept forests that some misguided environmental activists believe it to have been hundreds of years ago. The Indians know this first hand; after all, it is their heritage.

According to Trudy Pinkham, a Yakama tribe forester in Washington, it is unrealistic and illogical to expect the forest to maintain itself. “You cannot preserve the forest unless you put it under a glass,” Pinkham said. “To be in the woods is a disturbance to the forest. My people depend on the forest so we wisely manage the forest.”

In fact, if the Indians had not practiced sustainable forestry years before European settlement, the forests that exist today might not be as healthy or as sprawling. “Some people operate under the premise that the primordial eco-system here prior to European settlement was one big wilderness – unmanaged and with very few people. However, in reality it was a heavily populated, heavily used forest,” according to John Vitello, a forester with the Department of the Interior’s (DOI) Bureau of Indian Affairs (BIA). Vitello said, “Fires frequently ran through the ecosystem; and man, as well as other natural events, caused these fires. So what we have in North America are fire-dependent ecosystems.”

As Vitello explained, a fire-dependent ecosystem is composed of vegetation that has evolved with fire. For example, in the western half of the continental United States, ponderosa pines grow in great number. The health of ponderosa pine forests is dependent upon fire. Because the ponderosa bark is exceptionally thick, frequent fire would cleanse the forest of competitive brush and fire-prone tree species (such as firs) without harming the pine. This process would also thin out the young pine trees and provide more moisture and growing room and a distinct competitive advantage for the residual surviving pine. Exclusion of fire from these ecosystems is contrary to nature. Without frequent fire, forests become thick with brush and fire-prone species leading to increased water stress, the proliferation of insect and disease outbreaks and eventually to catastrophic wildfire that kills even the mature pine.

Native Americans didn’t try to exclude fire. When conditions warranted, they used fire to maintain the health of the forest. Fuel loads were reduced, foods and medicines that were important for the wildlife and for the community were produced and the forests were sustained.

Victoria Wesley agrees with Vitello’s view of fire. As a forester and a member of the San Carlos Apache tribe in Arizona, she is quite familiar with fire-dependent ecosystems and the ponderosa pines. Over time the Apache’s ponderosa forests were not managed with fire as they had originally grown accustomed to doing. As a result, the pines grew too close together, and lower forms of vegetation ran rampant. Now, in some cases, her tribe has gone back to using fire.

Pinkham is accustomed to fire as well. Without it the Yakama people may not have had the luscious huckleberry fields and bitter root plants that have sustained her people’s diets for hundreds of years. John Waconda, a BIA regional forester and New Mexico Isleta Pueblo tribal member, concurs; he explains that even today Indians “try to promote and to encourage traditional forestry practices such as the use of fire.”

The Importance of Planning 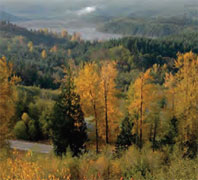 However, as the landscape of the Americas has changed, (even for Indians residing throughout various U.S. reservations), the reliance on “natural events” for forest management has shifted. As Waconda noted, the advent of housing and private land ownership has led to more modern practices of land management so as to not damage the existing infrastructure; “natural events” are not always containable nor controllable.

As in their use of fire, tribes choose practices different from traditional ones. “One of the most important things that guides us is the principle of forestry management planning,” Waconda said. But for Waconda’s tribe and tribes throughout America, forestry planning isn’t about timbering and profits; instead, it’s about a holistic approach to both preserving and profiting from the forest. “Our management plans certainly are a lot different from other public and private planning processes and procedures,” Waconda said.

The uniqueness lies in the blending of forecasting the economic uses of timber, the selling of timber and other forest products, and the balancing of religious and cultural elements that revolve around the forest. “In Indian country they’re looking at managing their forests not just for commercial products . . . but also for sustenance of their culture. So there are cultural plant materials, places in the forest that they use for ceremonies or gathering of materials that they use for crafts or items that they use in their daily lives; there are traditional foods in the forest,” explains Bill Downes, BIA chief forester.

As Pinkham explained, the forests mean more than wood products to be sold for outside industry; they represent teepee poles for ceremonies and homes for her people. “There’s no connection to many non-Indians. For them, it’s dollar figures. For me, it’s my culture,” Pinkham said.

Albert Bordeaux, director of forestry and a member of the Rosebud Sicangu Oyate Lakota tribe, is working to use the forest for his people as well. And as August came to an end, Bordeaux, a man who lives “with” the forest, was dealing with Rosebud’s “annual cut.” Before any of that timber is sold, Bordeaux and his team will take care of the tribe’s needs first. “We’re trying to provide homes for the homeless,” Bordeaux continues. “Timber is here for the people. We try to manage the best we can with what we have without getting depleted.”

And in helping the forests and the people, the community is strengthened. According to Morishima, “The forests are a part of the tribal community.” From economics to firewood, from medicines to food, from spiritual practices to art, the preservation and management of Indian forests is not just about the forests. It is about life.

The Difference Between “With” and “In”

In suburbs across America, residents often say that they live “in” the suburb or neighborhood. But Indians have always felt closer to their land – so close that they are one in the same. The difference is that instead of living “in” the forest, Indians live “with” the forest – a bond that is as close as kin.

Waconda views the forest as “an integral part of our existence. There is no disconnect between humans and the land.” Pinkham shares this philosophy and explains, “Our people believe this is a circle of life – everything has a meaning.” Thus, they have been living with the land for generations – never taking more than they needed so that future generations would not have to go without.

Long before Pinkham was a forester for her tribe, she learned a valuable lesson from an elder – her grandmother. While she and her grandmother were picking bitter roots, carrots and berries, Pinkham had the urge to take more than she needed. Her grandmother explained to her “We take only as much as we need,” Pinkham said. After all, there were other mouths in the community to feed – more people than just the Pinkhams.

Despite their emphasis on sustainability, the Indians have survived not only because of conservation but also because of adaptation. “The tribes have been agents of change,” Morishima said. “You cannot stop the clock; it’s really an adaptive attitude.” For example, when the pine beetle infestation spread through forests of the Yakama tribe, the Indians recognized the causes of the infestation: unhealthy, overstocked stands. “When the outbreak happened,” Morishima said, “they took remedial actions to care for the forest and for the land.” From this the Yakama Reservation exemplified the truest principles of Indian sustainability.

Concepts surrounding the viability and sustainability of tribal forestry practices are gaining popularity as a model of forestry. Downes at the BIA believes that Indian forests may be used “as a model for public landowners and maybe even private landowners” because of the traditional, generational knowledge that Indians have regarding forestry.

Don Motanic of the Intertribal Timber Council, www.itcnet.org, agrees: “Tribal forest practices would fit a private landowner’s goals if he or she wanted to manage the forest for more than a generation.”

A State of Being

Wesley, a tribal woman and a forester, has her own unique perspective. She said, “I’ve never lived off of the reservation (in Arizona) so I can’t relate to the outside.” For Wesley, forestry management and respect is about more than a process. It is about her very being. Upon being born, Wesley was rolled in the dirt with her umbilical cord buried in the wilderness – a process that “will, in essence, make a connection between your spirit and the natural world,” she said.

And it is with this perspective that Wesley views tribal forestry – not separate from man but a piece of man. “Whatever you do, good or bad will come back to you. What you do to Mother Earth will come back to your tribe,” Wesley said. “Some think we’re not a part of the natural world. We’re all connected to this planet. Living ‘with’ is a state of being; I was raised in that way.”

Think how the Earth and the lives of its inhabitants would be different if we were all raised that way.