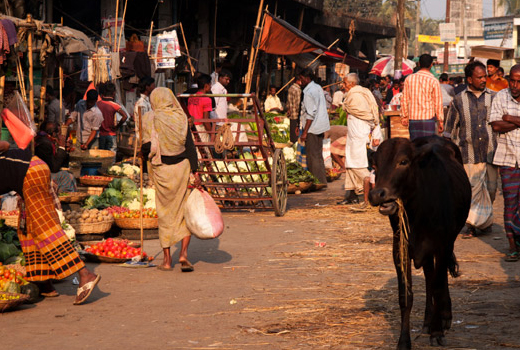 Living in the Donut: A Safe & Just Space for Humanity

by Kate Raworth, Senior Researcher, Oxfam November 1, 2012 Comments Off on Living in the Donut: A Safe & Just Space for Humanity  Features, Lead Story

Humanity’s greatest challenge in the 21st Century can be stated simply: It is to ensure that all human beings can lead lives of dignity and opportunity within the means of this one planet. Simple to say, for sure, but it would be hard to overstate the scale of this challenge. And it would certainly help people get there if they had a vision of where they want to be heading. So here’s one idea, which could help to provide that global-scale compass for the journey ahead.

In 2009, Johan Rockström of the Stockholm Resilience Centre brought together a group of leading Earth-system scientists to come up with the concept of planetary boundaries. They identified a set of nine Earth-system processes – such as the freshwater cycle, climate regulation and the nitrogen cycle – that are critical for keeping the planet in the stable state known as the “Holocene,” which has been so beneficial to humanity throughout the past 10,000 years. Under too much pressure from human activity, any one of these processes could be pushed into abrupt and even irreversible change with potentially catastrophic consequences for humanity. To avoid that risk, the scientists proposed a set of boundaries below their danger zones (such as proposing a boundary of 350 parts per million of carbon dioxide in the atmosphere to prevent dangerous climate change). Together the nine boundaries can be drawn as a circle, and Rockström and Co. have called the area within it “a safe operating space for humanity.” (Figure 1) 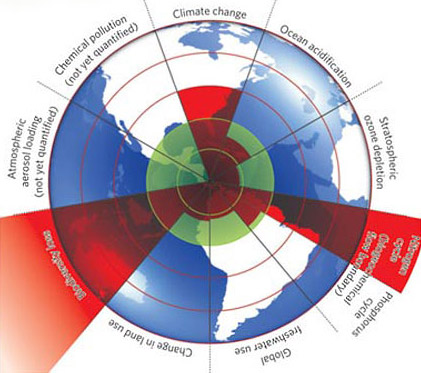 It’s a fantastically powerful idea. While economics has traditionally treated environmental degradation as an “externality” because it falls outside of the monetised economy, natural scientists have turned that approach on its head and stepped in with a clear, quantified depiction of environmental boundaries within which the global economy should operate – boundaries described not in monetary metrics but in natural metrics fundamental to the planet’s resilience.

And yet a critical part of the picture is clearly still missing. This “safe operating space” may protect the environment, but it could also leave many millions of people exposed to extreme poverty and deep social inequality. Humans can only pursue global environmental sustainability if they simultaneously pursue far greater global equity. This means adding the concept of social boundaries to the picture. Just as an environmental ceiling of resource use exists, above which lies unacceptable environmental degradation, so too there is a social foundation of resource use, below which lie unacceptable human deprivations.

What kind of deprivations, exactly? Human rights provide the cornerstone for defining that, but an early indication of the 21st Century priorities to be tackled comes from the social issues raised by governments in the run-up to the United Nations’ Rio+20 conference in June 2012. In their official submissions to that conference, the world’s governments highlighted 11 critical social deprivations – covering the lack of healthcare, food, water, income, education, resilience to shocks, voice, jobs, energy, gender equality and social equity. Together these constitute the illustrative social foundation shown in Figure 2. 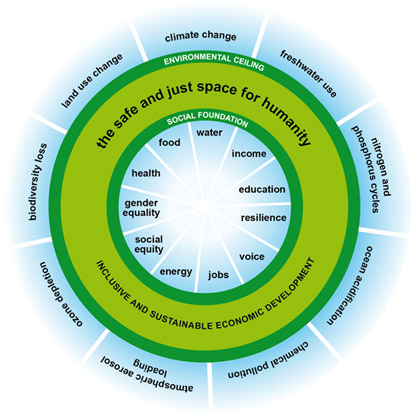 Between the social foundation of human rights and the environmental ceiling of planetary boundaries lies a space – shaped like a donut – which is both the safe and just space for humanity. 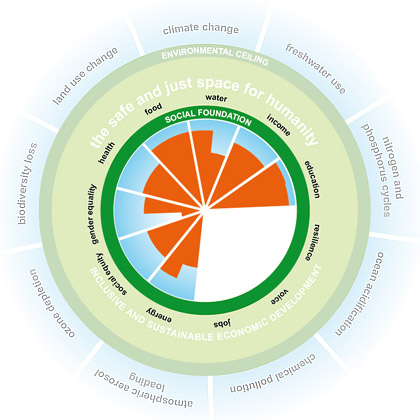 Earth-system scientists estimate that humanity has already crossed at least three of the nine planetary boundaries: climate change, nitrogen use and biodiversity loss. Likewise, United Nations (UN) statistics show humanity is falling far below the social foundation on all eight dimensions for which international data are available (Figure 3).

Thirteen percent of people are undernourished (indicated by the blue gap below the social boundary for food), 19 percent have no access to electricity and 21 percent live on less than $1.25 per day. Putting planetary and social boundaries together in this way reveals the extraordinary situation. Many millions of people still live appallingly far below the social foundation while collectively humanity has already exceeded several critical planetary boundaries. It’s a powerful sign of just how deeply unequal and unsustainable the path of global development has been to date.

But the really striking implication here is that ending poverty for everyone alive today need not be a source of stress on planetary boundaries. Providing the additional calories needed by the 13 percent of the world’s population facing hunger (850M people) would require just 3 percent of the current global food supply. Bringing electricity to the 19 percent of the world’s population (1.3B people) who currently lack it could be achieved with less than a 1 percent increase in global CO2 emissions. And ending income poverty for the 21 percent of people who live on less than $1.25 a day (1.4B people) would require just 0.2 percent of global income.

Adding to this excessive resource-use by the well-off are the aspirations of a growing number of consumers seeking to emulate today’s high-income lifestyles. Throughout the next 20 years, global population is expected to grow by 1.3B people while the global “middle class” is expected to grow from under 2B consumers today to nearly 5B by 2030.

For people moving into the lower-income end of this group, rising consumption may mean being able to afford meat, electricity and transport for the first time – transforming their lives and life-long prospects. But for those at the higher-income end, it may mean aspiring to consumption-intensive lifestyles that are deeply unsustainable.

The pressure on resources will be far-reaching. Global demand for water is expected to rise by 30 percent and demand for food and energy both by 50 percent. As international competition for these resources grows, people living in poverty will be worst hit, particularly through high and volatile food prices and land and water grabs. Securing rights to the resources they depend upon is a top priority.

So it is clear, if humanity is to live between social and planetary boundaries, there will have to be far greater equity in resource use – both within and between countries. But there will also have to be far greater efficiency in how resources are transformed to meet human needs. Around 30 percent of the world’s food supply is currently lost in harvesting along the supply chain or thrown away by consumers. Indeed, industrialized countries throw away almost as much food as is produced in sub-Saharan Africa every year. Redistributing resource use and raising resource efficiency are essential to the transition.

This “donut” is a compellingly simple image of sustainable development, but what difference could it make to how people approach humanity’s challenge? It doesn’t give answers on how to achieve sustainable development, but perhaps that is where its power lies: By starting from a different perspective of social and planetary boundaries, it can prompt people to ask new questions and see challenges from unfamiliar angles. 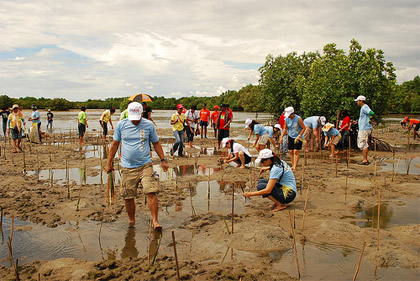 One important issue it highlights is the evident need to get beyond gross domestic product (GDP) and towards a far richer conception of what constitutes economic development. GDP’s dominance is clearly past its sell-by date. The global crises of environmental degradation and extreme human deprivation urgently demand a more nuanced starting point for economic theory and policymaking.

Just imagine if this donut-shaped diagram of social and planetary boundaries found its way to the opening page of every macroeconomics textbook. So, if a person wants to be an economist, then first there are a few facts he/she should know about this planet and how it responds to pressures from human activity. The person should also know about the human rights of its people and the resources that will be required to fulfill those. With these fundamental concepts of planetary and social boundaries in place, his/her task as an economist is crucial: to design policies, markets and regulations that bring humanity into the safe and just space between the boundaries and enable everyone to thrive there.

Under this framing of what a successful economy looks like, the questions economists ask would change radically – and that’s the power of frames because, through asking new questions, humans can shift to new paradigms. What constitutes economic development? It clearly depends on far more than a quarter-on-quarter increase in GDP. Achieving inclusive and sustainable economic development that brings humanity into the safe and just space requires four main shifts in focus:

These four shifts in economic emphasis would generate a much broader notion of economic development – and, if put into practice, economic policymaking would have a far greater chance of bringing humanity into that safe and just space.

Read the full discussion paper; join the debate on Raworth’s blog Doughnut Economics and follow her on Twitter @KateRaworth.

kraworth@oxfam.org.uk
Kate Raworth is Senior Researcher at Oxfam in Oxford, UK. Her research is focused on rethinking global economic development in the face of planetary boundaries and extreme global inequalities, including discussions of green economy and new measures of development. She has previously conducted research for Oxfam GB on climate change, adaptation and human rights, agricultural trade, labour rights in global supply chains and designing research for advocacy and campaigning. Prior to joining Oxfam GB, Raworth spent four years as co-author and economist of United Nations Development Programme’s Human Development Report. From 1994-97 she was a Fellow of the Overseas Development Institute, working with the Ministry of Trade and Industry of Zanzibar. She holds a BA in Politics, Philosophy and Economics, and a Masters degree in Economics for Development from the University of Oxford. Raworth can be reached at kraworth@oxfam.org.uk or by phone at +44 1865 472034. Oxfam is an international confederation of 17 organizations networked together in more than 90 countries as part of a global movement for change to build a future free from the injustice of poverty. The organization works directly with communities and seeks to influence the powerful to ensure that poor people can improve their lives and livelihoods and have a say in decisions that affect them. According to Oxfam, “We believe we can end poverty and injustice as part of a global movement for change.”