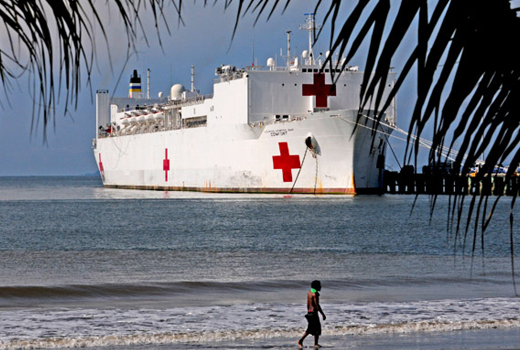 On January 12, 2010, the Haitian people suffered a devastating earthquake, which decimated most infrastructure and homes, and killed and injured thousands. The suffering was unimaginable, and the need for an immediate international humanitarian response was paramount. Immediately following the earthquake, the Navy Hospital ship USNS Comfort was tasked to respond along with a handful of amphibious ships and other naval assets. In many ways, the USNS Comfort was the face of America’s national response to relief efforts.

“For in this modern world, the instruments of warfare are not solely for waging war. Far more importantly, they are the means for controlling peace.” — Admiral Arleigh Burke, USN, 1961, 15th Chief of Naval Operations

At the time, the hospital ship USNS Comfort was undergoing scheduled maintenance in Baltimore, Maryland. Within a record time of 76 hours, the Navy team was able to transform the Comfort from an industrial work site to an up and ready mobile naval hospital, fully staffed and equipped with the most up-to-date medical technology. It deployed ready to provide medical care to America’s neighbors in desperate need in Haiti. In fact, the Comfort became the single largest orthopedic trauma center in the hemisphere and, ultimately, treated more than 1000 patients and conducted more than 800 major surgeries.

Destruction and devastation of this magnitude are nothing new. What is new is that the Navy, along with its Marine Corps and Coast Guard partners, now mans, trains and equips to conduct these kinds of missions wherever and whenever they may strike. To be certain, humanitarian assistance and disaster response missions are here to stay. In October 2007, the Chief of Naval Operations and Commandants of the Marine Corps and Coast Guard signed the United States’ first-ever joint maritime strategy entitled A Cooperative Strategy for 21st Century Seapower, which emphasized America’s kinetic hard power capabilities – like power projection and strategic deterrence – but also elevated two non-kinetic soft power missions, maritime security and humanitarian assistance/disaster response, as core capabilities. 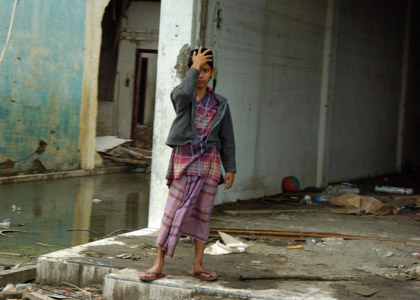 This new strategic thinking was further codified in 2010 when all three military service Chiefs jointly released the Naval Operations Concept (www.navy.mil/maritime/noc). One chapter on humanitarian assistance/disaster response emphasized how naval forces are ideally suited for these missions because of their organic medical support capabilities. Given their “forward presence, inherent mobility and flexible capabilities,” it is increasingly likely that naval forces will continue to play a key role and to serve as a “force of choice” for such missions in the future.

It is impossible to predict where the next threat will come from and what it will look like. As this century unfolds, the U.S. will need to be ready to respond to a range of challenges whenever and whenever they happen. I am quite confident that regardless of the challenge, it will require an expeditionary medical component, which means that Navy Medicine will continue to be fully engaged around the world.

Within the past four years, the world has seen these strategies and concepts in action, and they have very clearly shown America’s vital support role in this strategic mission. After responding to two tsunamis in six years, a hurricane in the Gulf Coast and two earthquakes in Pakistan and Haiti, the Navy has proven the necessity of a robust expeditionary military medical force to bring hope and stability to places and people in dire need. Such a humanitarian force, ultimately, leads to more peace, security and prosperity in the broader world.

Working together between the military branches has long been a given. However, the U.S. must move beyond just joint military operations. It must strive to enhance its collective ability as a nation to meet today’s complex and dynamic challenges. Simply put, the world’s challenges demand a new paradigm in how America prepares and responds. I believe the 2011 National Military Strategy, which former Chairman Mullen released in February, clearly articulates this new vision. The Defense Department must become a “Joint Force that provides military capability to defend our Nation and allies, and to advance broader peace, security and prosperity. Our military power is most effective when employed in support and in concert with other elements of power as part of whole-of-nation approaches to foreign policy.” Navy Medicine is a key supporting element of America’s whole-of-nation approach.

United States support to OPERATION TOMODACHI in Japan is but the latest reminder of the importance of America’s ability to work together to provide medical surge capabilities. The response to the Japanese people after a devastating earthquake, tsunami and nuclear fallout shows the selfless character of our nation. And, it shows America’s shared values of caring for others in need. Navy Medicine provided force health protection to American’s stationed in Japan and deployed radiological experts and other medical support staff in a surge capacity. Whether in Japan, Haiti, Indonesia or New Orleans, Navy Medicine saves lives in the short term and provides conditions for greater security and stability in the long term. 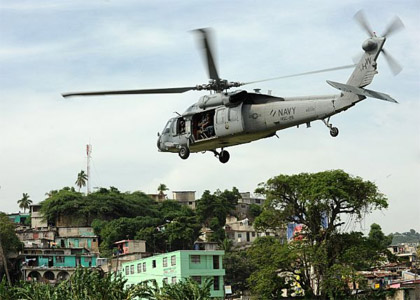 Another example of this approach is with the Navy’s proactive humanitarian missions around the world. USNS Comfort just finished a 5-month deployment to South America, Central America and the Caribbean in support of Continuing Promise 2011. And the Navy’s other hospital ship, USNS Mercy, returned from its 5-month Pacific Partnership mission last August after caring for more than 210,000 citizens from 13 countries. (These deployments alternate each year between hospital and amphibious ships.) These proactive, humanitarian-civic assistance missions, which include combined assets from partnering nations, non-governmental and intergovernmental organizations (NGOs/IGOs), work with host nations to assist civil-military operations in response to future crises. Such missions are illustrative of how America as a nation is creating “whole-of-nation” solutions by enlarging its engagement with others around the world. They are also a key component of United States maritime strategy.

These proactive humanitarian assistance missions bring to others a sense of enrichment and hope that touches individuals, families, communities and allied nations. And, in doing so, they benefit the global community. They not only strengthen relationships with host countries, they provide much needed medical care for thousands of men, women and children who would otherwise not afford or have access to care that they so desperately need. Continuing Promise and Pacific Partnership, in their 5th and 6th years of operation respectively, provide medical, dental, veterinarian, public health training and engineering support. In addition, these missions share best practices and lessons learned with partnering nations.

This knowledge sharing is akin to “teaching a man to fish” in that the information exchange is integral to building host nations’ organic medical competencies, disaster relief preparedness and maritime security capabilities. The trust and cooperation Navy Medicine helps build and sustain with multinational partners greatly enhances America’s ability to work together should a disaster strike the region in the future. Each successful humanitarian deployment has proven to increase U.S. interoperability with host and partner nations, non-governmental organizations and inter-agencies. Oftentimes, the Navy learns just as much from them as they do from the Navy, especially in terms of finding ways to better care for American citizens. Patients’ health transcends national borders as each nation provides care for the others’ citizens, which is one reason why it is imperative for doctors to train, to learn and to practice medicine together.

Another aspect of this new strategic approach is with U.S. military medical partnerships in research and development. These partnerships span the globe to include countries such as Botswana, Djibouti, Egypt, Peru and, most recently, Vietnam, where I was honored to sign America’s first-ever bilateral agreement and Memorandum of Understanding on military medical cooperation with an emerging ally.

Navy Medicine’s three overseas laboratory commands and its subordinate detachments and field activities have enabled the U.S. to provide needed resources and diplomatic tools for inter-agencies to develop their own initiatives with foreign governments. The Navy’s method of providing shoulder-to-shoulder medical science, infectious disease and health hazard support to host nation governments has repeatedly been cited as their best practice model for building more trust, cooperation and collaboration with the U.S. To that end, Navy Medicine has held extensive international engagements and development relationships in Africa, South America and Southeast Asia-Pacific for more than 66 years. 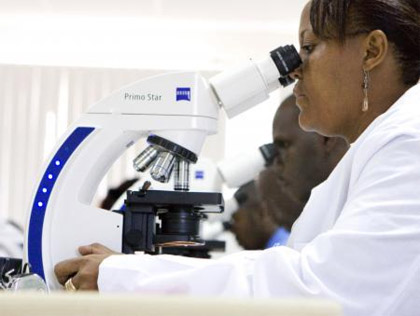 These broad activities represent only a fraction of what Navy Medicine provides in support of U.S. national security, diplomatic and development missions. Yet, they do clearly highlight the Navy’s enhanced and enlarged role in global health diplomacy. These partnerships should serve as a model to grow and to sustain Navy Medicine’s own capacity as well as the capacity of United States interagency programs for the future.

Research and development is crucial to strategic global health diplomacy missions because medical advancements start with an idea or experiment in a lab. Researchers and scientists epitomize the spirit of interdisciplinary scholarship, innovation and entrepreneurship. Science and technology, and research and development are the bases from which so many U.S. innovations originate.

For example, Navy Medicine is leading the development of a more agile next generation DNA vaccine technology against deadly diseases and bio-engineered weapons. This new generation of vaccines is expected to be safer, cheaper, more stable and effective, easier to administer and possess fewer side effects. The Navy is also making tremendous progress in malaria, Dengue Fever, HIV/AIDS and a host of other infectious diseases.

The Enduring Test of Global Leadership

Medicine is a common language that all countries understand. Wherever America can provide hope, comfort and care to others in need, and wherever it can partner with other allied nations through military medical partnerships, it behooves us to do so. This compassionate strategy builds trust and cooperation, and strengthens relationships with a broader coalition of countries for mutual benefit. And, simply put, it is the right thing to do.

Humanitarian assistance and disaster response missions are an integral part of today’s security mission, which puts Navy Medicine at the forefront of U.S. global operations. Helping other countries better provide for their own security will be a key and enduring test of U.S. global leadership and a critical part of protecting U.S. security.

Navy Medicine has a unique role to play in these missions because it transcends borders through its various partnerships around the world. As global health diplomats and ambassadors, its servicemen and women are part of the Nation’s and the Navy’s “global force for good.” America must continue to embrace joint, interagency, whole-of-nation, multi-national and public/private partnership solutions if it is to truly have an enduring impact on global health and crisis response. 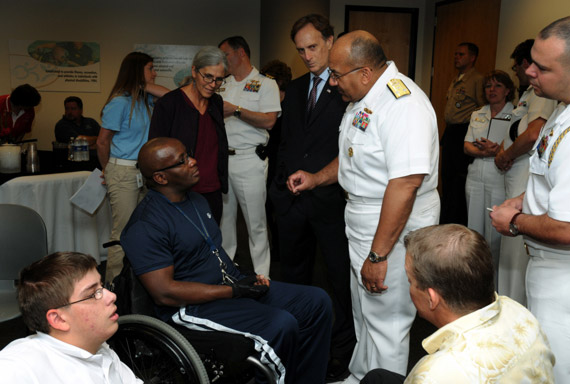 U.S. Navy photo by Mass Communication Specialist 1st Class Joshua Treadwell | Vice Adm. Adam M. Robinson Jr., former Surgeon General of the Navy and Chief of the Navy Bureau of Medicine and Surgery, speaks with a wounded warrior at the Lakeshore Foundation in Birmingham, Ala.