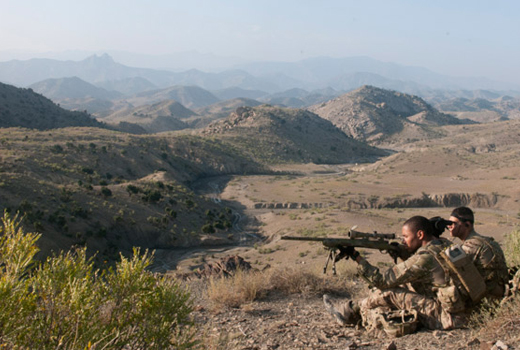 New Rules of War & Peace: The Ultimate Weapon May Be No Weapon At All

by Rosemarie Calvert May 9, 2012 Comments Off on New Rules of War & Peace: The Ultimate Weapon May Be No Weapon At All  Columns, Hard Issues

Imet Lt. Col Shannon Beebe in 2011, shortly after he was “relieved” of duty as the U.S. Army’s senior Africa analyst. According to Beebe, he had been “hidden away” in a desk job pending an unofficial but skillfully forced retirement as a direct result of co-authoring (with Army permission) the book, The Ultimate Weapon is No Weapon at All: Human Security and the New Rules of War and Peace. He and Mary Kaldor, professor and director of the Centre for the Study of Global Governance, London School of Economics and Political Science, “show that the lessons of conflicts in places like Bosnia, Kosovo and Iraq are that security is no longer achievable – even for nations with massive militaries – by traditional military strength. High-tech weaponry is an often distracting, superficially comforting, illusion.”

Beebe and Kaldor argue that “a thorough overhaul of military priorities and tactics must be matched by a transformation in civilian organizations. NGOs, charities and others, whose work abroad is a vital part of developing security in troubled regions, must accept that the division between military and non-military personnel in most cases no longer exists and accept the help of a military, which should be trained in new ways to protect rather than to kill.”1

What a revolutionary idea, or is it? Certain thought leaders inside the military have considered for some time that this security strategy is on-track and prescient. But, they have preferred not to discuss it openly for fear of Beebe-like retribution. “They” may not take dissenters out the back door and dispose of them anymore, but “they” still certainly know how to discredit and ruin their careers, which is exactly what Beebe believed happened to him.

Recently retired U.S. Marine Corps Colonel Mark Mykleby discusses this same type human-security ideology when he comments on “blurring the distinction between defense and national security” (“Essential Thoughts on 21st Century Security”). According to the former special strategic assistant to the Joint Chiefs of Staff, “We must strike a balance between defense and the full spectrum of what constitutes national security in the 21st Century.”

In fact, Mykleby embraces Eisenhower’s warning concerning America’s military industrial complex when he advises against pouring “more and more resources into calcified organizations, inflexible institutions, irrelevant processes and paradigmatic weapon systems in a vain attempt to control the uncontrollable without ever changing the logic or efficacy of our actions.” 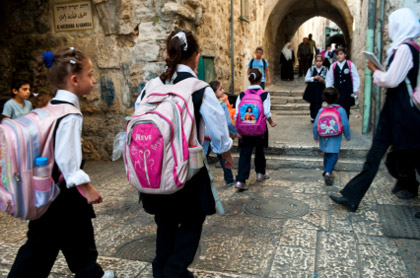 © iStockphoto.com/jcarillet|Palestinian school children walk to school in the Muslim Quarter of the Old City of Jerusalem. Due to the Israeli Six-Day War (1967) the status of East Jerusalem is contentious.

This certainly doesn’t mean we don’t need a strong military, it means we need a smart military to match thinking and strategy to human evolution and environment – something that certainly hasn’t been done since before the Cold War era. An often cited example of dated thinking is former Secretary of State Condoleeza Rice’s Oct. 27, 2000, New York Times comment, “Carrying out civil administration and police functions is simply going to degrade the American capability to do the things America has to do. We don’t need to have the 82nd Airborne escorting kids to kindergarten.” Even in 2000, forward-thinking security strategists were saying, “Why not, if the mission has a direct impact on national security?”

Consider the following: According to the Children’s Rights Portal, Iraq is an “unstable country and is prone to large numbers of terrorist attacks. Children represent approximately 8.1 percent of the total number of people killed in these attacks. They are often victims of explosive devices and car bombs. According to the Moroccan Organization of Human Rights, more than 174 children were killed and 773 injured in 2010 as a result of these attacks.” And, these numbers don’t reflect Iraqi’s 31 percent under-five mortality rate, its children forced to become child soldiers or those forced into prostitution and pornography by human traffickers, the latter two which are clearly identified security issues.

According to Beebe and Kaldor, “Escorting kids to kindergarten is emblematic of human security in action. In zones of insecurity, children may not be able to attend school because they risk being kidnapped or seized to become child soldiers or child prostitutes [or] because the route to school is rife with fighting or land mines. . . So being able to take kids to kindergarten is a measure of human security.

“Studies show that primary education, especially the education of girls, is one of the most important factors contributing to development and stability. Moreover, when members of the 82nd Airborne escort kids safely to school, they gain the trust of the local population, which is the key precondition for all the other tasks of a human-security approach. It is even better if the 82nd Airborne helps local people (military, police or parents) to escort kids to kindergarten.”

Millions, if not billions, of people around the world mortgage their futures just to survive another day. “When people live in desperation, uncertain of life from one day to the next, any offer of a better life for their children becomes desirable,” explains Beebe and Kaldor. “Those digging through the garbage can may have nowhere to call home but more often than not they do have access to satellite television and can see that others have it far better than they do. 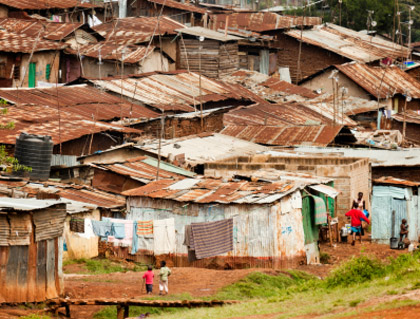 © iStockphoto.com/ranplett|A view of Kibera, a densely populated neighborhood in
Nairobi known as one of Africa’s largest slums.

“They don’t know why that should be so, or how it can be that one life should be so different from another, valued so differently, just because of where a child was born. The ambition of a human-security approach is the creation of the conditions for sustainable development benefitting the whole of society – elites and common citizens alike. To believe in the merits of a human-security approach you don’t have to believe that everyone is good, simply that in a secure context most people have a vested interest in continued security, and that makes it easier to marginalize and arrest the bad guys without creating more bad guys in the process. Our world is irrevocably interconnected: If we continue down the current path, discounting the conditions that create instability . . . we are creating our enemies for the future.”

Beebe, Kaldor, Mykelby and other forward thinkers hope for a common, international language of security based on the 21st Century. However, this will mandate a shift from what the West defines as “right” for the developing world and international security to what people in the developing world define as “right” for themselves and their own security. Wake up America, the Cold War is over. Beebe and Kaldor are on the mark when they say that no “ultimate” weapon exists to manage or to defeat today’s or tomorrow’s hybrid threats of conflict. This is especially true when we factor in climate change. If, indeed, the ultimate weapon of the 21st Century is no weapon at all, the world may be witness to the end of America’s “military industrial complex” as we know it. I wonder what Ike would think. 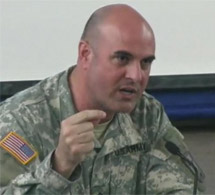 Still from the Conflict Prevention and Resolution Forum 2011

Lt. Col Shannon Beebe, whose work explores 21st Century concepts of security in Africa, was a leading thinker on the concept of human security. Beebe placed special emphasis on the environment as a key to stability in Africa and, as a result, worked with numerous international environmental agencies, NGOs, think tanks and academia connecting them with concepts of security and defense. Beebe traveled extensively in Africa conducting research in more than 12 African countries listening to how Africans view their own security. He was a frequent guest lecturer on African and environmental security at the Joint Special Operations University, Hurlburt Airfield, Fla.; United States Foreign Service Institute; National Defense University; Army War College; Brookings Institute; Center for Strategic and International Studies and the Royal United States Institute of London. Beebe received his B.A. in Political Science from West Point’s U.S. Military Academy and his M.A from the University of North Carolina at Chapel Hill. He served as the U.S. military attaché to Angola from 2009 to 2011; prior to that he served as Senior Africa Analyst, Office of United States Army Deputy Chief of Staff, Intelligence.

Note: Beebe passed away Aug. 7, 2011, at the age of 42. He was piloting a single-engine plane toward Warrenton Air Park in Fauquier County, Va., when the aircraft suddenly banked steeply and then crashed into flames. His girlfriend, who was a mother of two small children, died with him. Beebe was an avid pilot, who had logged more than 1,000 hours in small planes flying in the African and Alaskan backcountry.