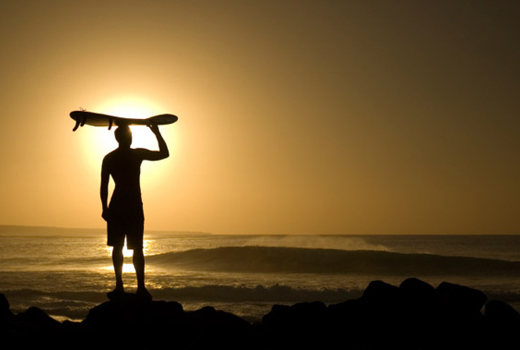 If you’re a Hawaii resident, get ready to be shocked, perhaps even “electrified,” and not in a good way. If you live elsewhere in the United States, consider yourself lucky. Yeah, yeah . . . I know all about the beautiful Hawaiian scenery and climate. It’s all true. In fact, in the three years since my wife, Elizabeth, and I moved to Maui from Arizona, we’ve never used any sort of energy for either heating or cooling of our spacious home – not even with our wood-burning fireplace. Mother Nature took care of everything. As for transportation, we’ve kept and continue to drive a Honda Hybrid, which averages 43 miles per gallon, and we drive only about 8,000 miles per year. We grow our own fruits and vegetables and live in congruence with nature. In short, our “carbon footprint” is already minimal compared to most Americans. So you’d think life is not only good but also cheap in our Garden of Eden on Maui? Well, think again. Gas prices are nearly $5 per gallon and electricity is three times higher than the national average. Last year alone, the price of Hawaiian electricity went up 27 percent. Ouch!

Why? My short answer is greed. I believe greedy utilities and corrupt politicians make up a powerful mix of bad energy. Take a look at this chart based on U.S. Energy Information Administration data: 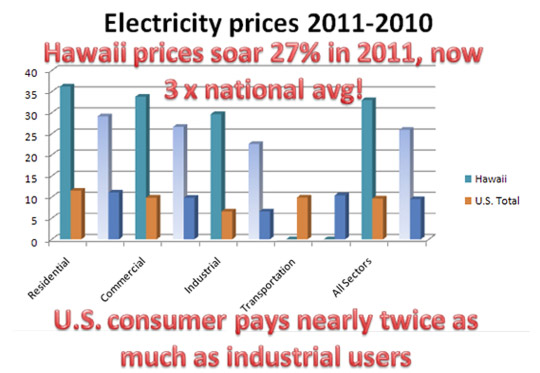 See what I mean when I say, “consider yourself lucky” (if you don’t live in Hawaii). Our personal use of energy is minimal, yet public utilities are socking it to us anyway. And our elected government officials are doing nothing about it. Also, did you notice on the above chart that the Industrial Sector in America is paying only about one-half as much for electricity as residential customers? In other words, consumers are subsidizing big business. Why? That’s the question we, the citizens of this country and of these beautiful islands, must pose to our elected officials. Why are they allowing utilities to gouge their constituents while favoring corporations?

Of course, we already know the answer: “He who pays the piper calls the tune.” But we still should ask the question because what’s happening in America, and especially in the State of Hawaii, is a travesty that must be corrected and reversed. It gets worse. The Hawaii Public Utilities Commission and Maui Electric Co. (MECO) are also trying to restrict (!?) the use of solar energy by private homeowners by “capping” certain areas of our islands. Instead of encouraging people to switch to clean, renewable energy, they’re trying to block it. Can you believe it!? Check out this MECO web site page for details. Both are outrageous examples of taxpayer abuse by public utilities and government agencies. It’s time for us to “just say no” to such practices.

It’s a real perversion to pass regulations giving a utility company the power to approve solar installations. Solar companies are their competitors. That’s like allowing Microsoft to control Apple’s designs or contracts or GM Toyota’s or Bank of America Wells Fargo’s. In short, it’s a clear conflict of interest. Yet our politicians allow such corrupt practices to go on. So “job one” is to get rid of our incumbent politicians and prevent utilities from blocking progress and our march to freedom.

The Solution: Solar or Wind Plus Electric Cars

Luckily, there’s a solution, a light at the end of the tunnel. And it’s not an oncoming train. 🙂 The solution is privately generated solar or wind energy and fully electric cars. Not only can we help ourselves and our pocketbooks, we can also help our planet and the environment by eliminating such pollutants as public utilities and other industrial oil and gas energy guzzlers in our driveways. 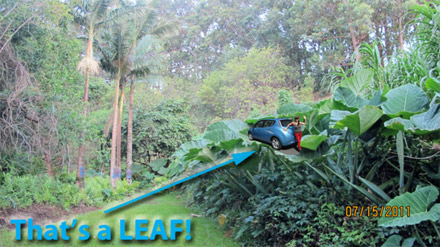 As for the electric car, since one enlightening weekend on Oahu, Elizabeth and I have a Nissan Leaf on order. Nissan has promised us delivery in late May 2012 but not before I had to “kick butt” (figuratively speaking) both at the Nissan national and local levels around the middle of March. I’ll spare you the gory details, but it was like pulling hen’s teeth. Not a good experience. You’d think “avant-garde” companies with “avant-garde” products like the Leaf would be bending over backwards to make it easy for a customer to buy them. Not Nissan. Oh yes, they gave us lots of platitudes, but talk is cheap. Action speaks louder than words. For instance, the suggested retail price at the Nissan website for a Leaf is $37,250. Well, that’s before the “bait and switch” moves, we discovered. The dealer’s actual quote was $38,920. The difference was the mark-up.

“Infrastructure,” was the dealer’s answer.

Infrastructure? That’s only pertinent for other gas-guzzling customers, not us web clients. Another thing the Nissan dealer “forgot to mention” was that the installation of the home charging dock would cost an extra $2,000. However, by the time we got an actual quote from Nissan, it was $3,000. Oh, and then there will be another $2,000 or so in shipping charges and taxes. So, suddenly our $37,000 Leaf mushroomed into a big $44,000 “Ape” (pronounced Ah-Peh) or “Elephant Ears” – giant jungle leaves above.

You’re probably thinking this is where we quit and threw in the towel. Almost, but we found out that with federal and Hawaii tax rebates, the net price of the Nissan Leaf, even after all the extra charges, drops down to $32,000. Upon learning this, the next thing I did was to analyze fuel costs within the last 12 months. Considering our exorbitant gas prices of $4.90 per gallon, how long do you think it would take us to pay for the Leaf? Not long, right? That would be a logical answer. I hope you’re sitting down – 30 years, no kidding! Because, what we save on gas, the local electric utility taketh away. 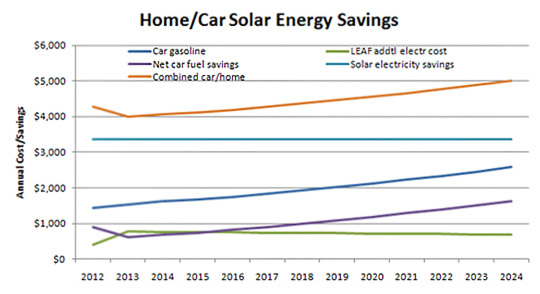 Bottom Line: Get “Off the Grid”

Did that finally discourage Elizabeth and me from pursuing the Leaf? No. I felt there had to be another way, a better way of skinning this cat. So I started researching solar and wind power generators. Eventually, I settled on a solar system that will almost completely displace our public utility bills. We expect to pay for the system from our electric bill savings in just four years! For both the Leaf and our home renewable energy system, the combined payback period would be 10 years. Meanwhile, if we treated our Honda Hybrid as a “trade-in” (we do intend to sell it after we get the Leaf), the net payback period for the Leaf drops from 30 to 16 years – and for both the car and home energy system, from 10 to seven years.

Now, that’s something we can live with. So we went for both.

As a result, by the summer of 2012, Elizabeth and I hope to be virtually “off the grid” (meaning 100 percent energy self-sufficient). But here’s the best part: As a result of the solar system conversion alone, our lifetime “carbon footprint” reduction will be 464,540 pounds, according to one quote we received. And as for the Leaf, it has zero emissions.

Our Mother Earth must be breathing a sigh of relief even if it’s just one home and one family. Can you imagine the impact we, humans, could have globally if more people started to think and to act not only in their self-interests but also in the best interests of our planet? Fortunately, we can do both – act altruistically and in our own self-interest. So wake-up America and smell the roses. And then kick your politicians and utilities out of the way on our march to freedom

Bob Altzar Djurdjevic is a writer, musician, shaman, filmmaker and business consultant based in Haiku, Maui, Hawaii. You can find more of his research and columns at www.gaiasteward.org (environment), www.altzar.org (arts & spirituality), www.truthinmedia.org (geopolitical), www.djurdjevic.com (business) and www.yinyangbob.com (personal).