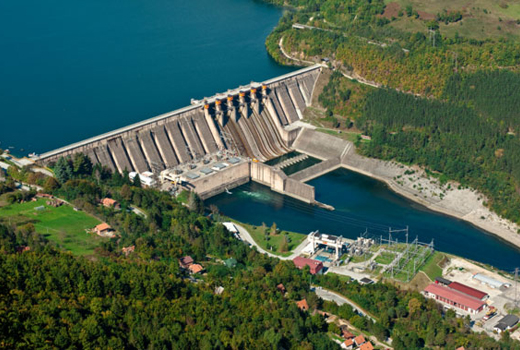 Pumped storage hydroelectric projects have been providing valuable storage capacity, transmission grid ancillary benefits and renewable energy in the United States and Europe since the 1920s. Today, the 40 pumped storage projects operating in the U.S. provide more than 20 gigawatts, or nearly two percent capacity, of our nation’s energy supply system. Pumped storage and conventional hydroelectric plants account for 77 percent of our nation’s renewable energy capacity, with pumped storage alone accounting for approximately 16 percent, according to the Energy Information Administration.

On its own, pumped storage hydro’s contribution to our nation’s transmission grid are considerable. It provides critical reliability services and storage capacity while creating green jobs. But what additional role can it play to meet rapidly growing storage capacity and variable green power needs in a nation relying on economic recovery spurred by investment in renewable energy technology and associated jobs? With evolving state and Federal renewable portfolio standards as catalysts, given accompanying legislative and regulatory policy support, the opportunities for pumped storage to play a key role are significant.

Pumped storage is a type of hydroelectric power generation that stores energy in the form of water in an upper reservoir pumped from a second reservoir at a lower elevation. Historically, it has been used to balance load on a system and allow large, thermal generating sources to operate at optimum conditions. Pumped storage is the largest capacity and most cost-effective form of grid energy storage currently available. These type systems also provide ancillary electrical grid services such as network frequency control and energy imbalance reserves. This is possible because of pumped storage plants’ ability to respond to load changes within seconds. As a result, it is now being applied to firm the variability of renewable power sources such as wind and solar generation. Pumped storage can absorb excess generation (or negative load) at times of high output and low demand, and release that stored energy during peak demand periods, thus enabling wind power’s growing penetration into the U.S. energy supply system.

The Critical Need for Energy Storage

Increasing bulk energy storage capacity has not been a priority for utility planners or energy legislation in recent decades. Because many utilities deregulated in the 1990s, the industry has had no mechanism or incentive for coordinated integration of new generation, storage and transmission.Yet, these three components of a reliable energy generation and transmission system require coordinated long-term planning. 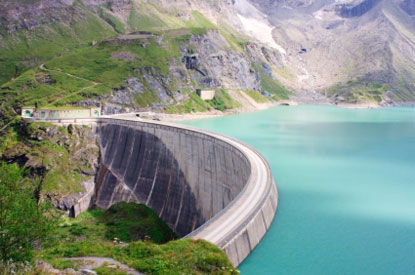 Meanwhile, demand for renewable generation continues to grow. Twenty-nine states and the District of Columbia have enacted Renewable Portfolio Standards requiring that renewable sources represent a certain percentage of new generation supplied to the grid. Climate policy initiatives are also driving investment in renewable sources. This has created rapid growth in variable generation such as wind and solar, but there has been no corresponding capacity (storage) or transmission planning. The result is that in areas such as Texas, California and the Pacific Northwest, excess wind energy exists without corresponding demand at those times when electricity is available, which is typically at night. Alternatively, peaking power supply is insufficient to provide on-demand capacity when wind and solar plants cannot generate.

Variable energy resources provide a sustainable energy source that uses no fossil fuel and produces zero carbon emissions. However, the energy available is non-dispatchable – it tends to vary and is somewhat unpredictable. The power-system load is also variable – reserves are required to match changes in generation and demand on a real-time basis. Variable generation cannot be dispatched specifically when energy is needed to meet load demand. Wind and utility industries have been able to address many of these issues through improvements in wind forecasting and wind turbine technology, diversification of wind turbine sites and creation of larger power-system control areas. At low wind penetration levels, output typically can be managed in the regulation timeframe by calling upon existing system reserves, by curtailing output and/or by diversifying wind farm locations within a broad geographic area.

As more variable energy is added to the power system, additional reserves are required. Flexible and dispatchable generators, such as hydro, are required to provide system capacity and to balance reserves in the hour-to-hour and sub-hour load time-frame. In addition to system reserves, every balancing authority requires energy storage to balance excess generation at night and to shift its use to peak demand hours during the day. Conventional hydropower projects do this by shutting down units and storing energy in the form of water. And, it is the most common form of energy storage in the world. As variable energy output and ratio of wind generation to load grows, historical system responses will require modification to take advantage of regional grid wind energy benefits and to assure system reliability. 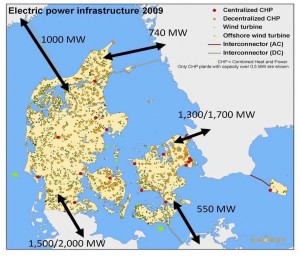 An intensive effort to upgrade district heating plants in most Danish towns and villages to combined heat and power also occurred during the past 15 years. Total capacity of these decentralized power units in 2004 was 1,450 MW. The units also supply heat to the district heating system and are, therefore, must-run cogeneration plants. In addition, Denmark enacted a significant wind power building program during the 1990s, which totaled 2,374 MW by year-end 2003. Although the U.S. and Germany have installed more wind power overall, West Denmark’s “wind intensity” is still unmatched on a per capita basis. It is equivalent to 0.88 kilowatts (kW) of installed capacity per person compared to 0.18 kW per person in Germany.

The strong electrical interconnections between Denmark, Norway and Sweden, and the access they provide to flexible hydroelectric power in Norway and Sweden, are the foundation of Denmark’s ability to absorb the developed wind penetration. Sweden’s and Norway’s conventional hydropower output can be adjusted very rapidly as highly variable wind generation and energy imbalance flows through the interconnections. 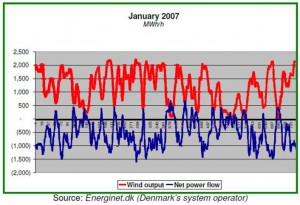 As shown in Figure 2, West Denmark makes full use of its interconnections for balancing wind power per the strong and direct correlation between wind output and net power flows. However, the interconnections were built primarily to link hydropower in Norway and Sweden to Germany. Without their prior existence, it might not have been viable for West Denmark to build wind capacity on this scale. 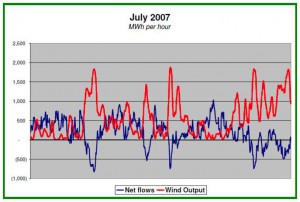 Figure 3 demonstrates power flows across Danish interconnections during a low wind period. It shows the direct relationship between low output wind energy and imported power from Norway and Sweden.

Denmark and areas of the U.S. Pacific Northwest have comparable wind penetration levels and similar must-run power stations that limit flexibility of their respective generation systems. The Danish power system works because it is strongly interconnected to the hydropower-supplied grids of Norway and Sweden. The latter are generally able to accommodate power surges during high-wind periods and can send energy back to Denmark during low-wind seasons.

Relatedly, Norway’s exposure to extended drought periods is mitigated by wind energy imported from Denmark. This blend of energy technologies is a global example of the mutual benefits of wind/hydropower integration. As a member of NORDPOOL (the Nordic Transmission System Operator), Denmark is not a balancing authority and can, therefore, import/export its reserves as needed from Norway or Sweden.

Many advocates of increased renewable generation point to Denmark as the example for integrating large amounts of variable generation and for how it can be adopted by the U.S. The key point overlooked is that the Denmark transmission system does not provide its own system balancing services. The two systems (East and West) depend on interconnections with Germany and Norway. Both countries are rich in pumped storage and conventional hydro respectively. Additionally, it has been shown that there is a direct correlation between wind generation and power flow over the interconnections, with hydro and pumped storage being the generation source to balance wind’s variability.

Increased U.S. development of wind and solar energy requires a corresponding increase in flexible generation, including pumped storage. With the emergence of new renewable technologies and ever-increasing investment in variable generation sources, including wind and solar, the need for storage has never been greater.

Pumped storage hydro projects are critical transmission system tools providing crucial storage, generation and ancillary services throughout the U.S. today. In response to growing need for storage, and the exceptional synergy between pumped storage and variable renewable energy sources such as wind and solar, the hydro industry is proposing to more than double pumped storage capacity in the near future. FERC recently issued more than 40 preliminary permits for new pumped storage hydro projects, representing approximately 40 GW of capacity. Another 15 applications for preliminary permits pending before FERC could provide an additional 16 GW of capacity.

How significant is the 40-56 GW of proposed pumped storage capacity? The U.S. Department of Energy (DOE) recently projected that in order to meet the Nation’s goal of obtaining 20 percent of its electricity from wind generation by 2030, utilities must integrate 300 GW of wind generation onto the grid. To accommodate this variability, an estimated 50 GW of new peaking generation, probably from natural gas, would be needed (DOE 2008). However, new generation is not the only way to address this need. In its December 2008 report to DOE, the Electricity Advisory Committee advocates using storage, rather than new generation sources, to provide some of this capacity.

With current proposals, the pumped storage sector of the hydropower industry is poised to fulfill an estimated 100 percent of the storage capacity needed to meet the national 20 percent wind initiative. This would reduce the need for additional fossil fuel-derived peaking generation and avoid greenhouse gas emissions associated with those resources. By directing the Nation’s energy infrastructure investments toward storage facilities used at or near capacity – while also providing many ancillary benefits – Americans would avoid investing in large fossil fuel generation sources that operate only a fraction of the time. 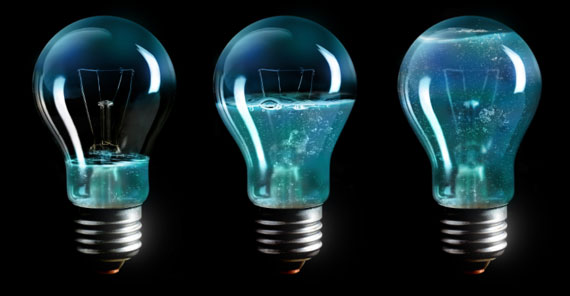