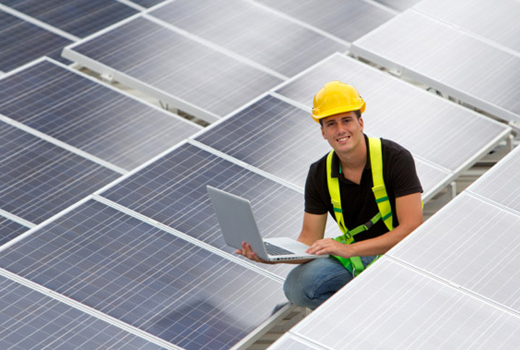 Solar power is a resource that is difficult to fight about. Everyone can imagine a war for oil, but no one can imagine a war for the sun’s rays. That may be one reason why we have yet to unlock even a fraction of solar power’s full potential. While the latest oil boom in the United States may decrease interest in solar for now, we should keep in mind the ecological implications associated with techniques like fracking, which is an unsustainable process producing a nonrenewable resource. Unlike probably any other form of energy generation, solar could be installed cost-effectively in each and every household and business with no detrimental ecological consequences.

Just imagine, in a few years every window could essentially be fitted with a solar panel. The combination of industrial size solar power plants with household electricity generation enables smart grid solutions like no other. The greatest chance to unlock this potential lies within Sunbelt countries – countries that are particularly sunny, hot and dry – like Saudi Arabia, parts of Mexico, California and Texas, as well as Australia. The price of solar power, especially photovoltaics (PV), has been massively decreasing, thus making the market ready to function without any government subsidies.

According to a study by GMT Research, solar power is expected to be competitive with coal by 2016. U.S. Energy Secretary Steven Chu predicts “the unsubsidized cost of renewable power produced from solar and wind energy will be no more expensive than from oil, natural gas and coal by the end of the decade.” For that to occur, the price of a solar panel will most likely come down to 50 cents per installed watt.

“. . .Saudi Arabia, the world’s largest crude oil exporter, seeks to generate one-third of its electricity with energy from the sun by 2032.”
Prices dropped 14 percent in 2011 and around 10 percent in 2012, which put the price of a solar panel at around 70 cents on average.

According to a 2010 European Photovoltaic Industry Association study, Unlocking the Sunbelt Potential of Photovoltaics, unlocking the PV potential will drive huge installments of solar panels, which are already being built in many of these areas. The study expects 405 GW of PV will be installed by 2030 in the Sunbelt countries alone. For example, Saudi Arabia, the world’s largest crude oil exporter, seeks to generate one-third of its electricity with energy from the sun by 2032. In early March 2013, the United Arab Emirates launched the Middle East’s biggest concentrated solar power plant.

However, two problems still exist and need to be solved: One is the storage and distribution of electricity, and the second is maintenance. For the past 12 years, I have been working on a solution for the latter. Since contamination can restrict solar cell operation by 35 percent, effective cleaning of modules contributes significantly to effective operation of a solar power plant. In proposed application areas like Saudi Arabia, Morocco and comparable regions, efficiency of solar panels may fall by as much as 70 percent due to sandstorms.

My robot, Solarbrush, is designed to clean solar energy systems in order to maintain the efficiency and economy of solar cells. The device brushes residual dust and sand from solar panels by following programmable patterns of movement, stepping from one panel to the next until all panels have been cleaned. Once one row is cleaned, the robot needs to be moved manually onto the next row of solar panels. If six robots are handled by one service worker, the robot is already more effective than manual cleaning crews who basically use tools that a window cleaner does. So far, unskilled workers are the largest competitors of Solarbrush; however, their working hours are restricted. For example, the heat in countries like Saudi Arabia makes work breaks compulsory between 10 a.m. and 3 p.m.

Additionally, cleaning solar plants on a scale larger than 200 football fields is a task that would clearly need mechanical help. A price of around $3,000 per Solarbrush device is now being assessed for serial production. Other devices use vacuum cleaning or water pressure and, therefore, need a magazine or pumping pipes. This makes competitor robots very heavy (weighing up to 200 pounds) and 10 times more expensive. My device weighs five pounds and runs on batteries that currently last two hours before needing to be recharged. However, battery life is being improved to last for four hours. 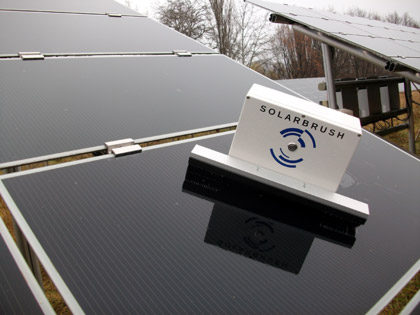 For a long time, producers of solar cells claimed solar modules were maintenance free. They argued that rain would wash them clean, but rain is too rare in countries where solar power is most effective. Then came the hype about nano coatings, which were supposed to keep modules protected. I have since found that these coatings are not practical outdoors, and both sand and dust still remain on solar panels. Marketing and bias has swept the issue under the carpet, so to speak, for the past two years. Finally, solar panel manufacturers now admit panels need maintenance. So, awareness of efficiency loss due to contamination from sand and dust has risen significantly.

In 1998 at age 13, I first thought about the design of the robot. Solar power fascinated me. I had a panel on my parent’s balcony where I measured decline in energy production due to dirt. People thought I was on the wrong track building my robot as market volume was very limited back then. However, I continued working and developed many mechanisms, such as the drive design, which is key to building a low-weight, effective machine. I was contacted early on by a journalist who liked the idea of reporting on a teenager so focused on solving this particular problem. I also had the opportunity of gaining internship positions with some of Germany’s well-known technology companies, which have supported me and that continue to support me with various parts and know-how.

Today, I am contacted regularly by solar companies from around the world, which makes continuing with the development of Solarbrush all worthwhile after such a long time. Already in 2013, I have had some exciting opportunities. At the World Future Energy Summit in January, I presented my robot to highly interested, potential customers. Then in March, I felt honored to travel to Silicon Valley, a trip that was part of my prize from the Hy! Berlin Award. It was an adventure I’ll never forget as I met with top managers of solar industry companies, IT giants and many other valuable potential partners and investors. I also enjoyed comparing the Silicon Valley scene to London, where I stayed a few days before finally making my way back to Berlin.

As soon as I finish the long-term testing of Solarbrush in target regions, most likely the Near East, I will be ready to sit down with investors to get partners onboard. I have always tried to keep Solarbrush a one-man-show while the device was not 100 percent market ready. But now the time has come to commence and grow or, as one journalist put it, “to build a fleet of robots to fight global warming.”

contact@solarbrush.de
Ridha Azaiz was born in 1984 in Fellbach, a town situated in southern Germany. Azaiz has been developing small robots to clean solar panels since 1997. In 1998 when he was just 13 years old, he was invited to be part of an initiative that supports teenagers who work on scientific projects. Since then, Azaiz has developed several prototypes for his Solarbrush robot. In particular, he has been working hard to find the most effective design for what he considers to be his target market of Sunbelt countries. Azaiz earned his Diploma in Engineering in February 2013 and has since been concentrating full-time on Solarbrush’s business development. He has received numerous awards, such as the “Land of Ideas” funded by the German Federal Government. Additionally, he won the 2013 Clean Tech Media Award, as well as First Place in the Hardware Category at the Hy! Berlin Contest. Azaiz can be reached at Potsdamer Strasse 63, D - 10785 Berlin; Mobile + 49 160 979 690 16; contact@solarbrush.de. For more information please go to: www.solarbrush.de.