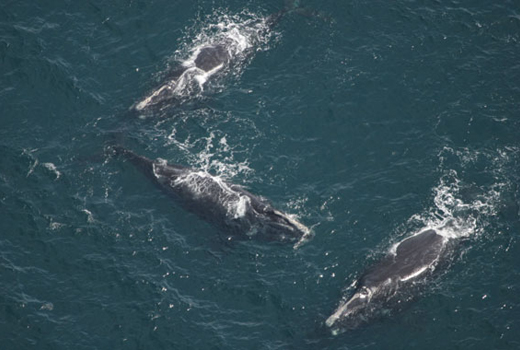 The North Atlantic right whale (Eubalaena glacialis) is one of the most endangered marine mammals in the United States, with as few as 345 whales remaining. Although whaling has ceased, human activities such as vessel strikes and fishing gear entanglements still threaten these mammals, thus killing an average of two North Atlantic right whales each year. The right whale is the most endangered marine mammal in U.S. waters. Hunted for more than one thousand years for their oil-rich blubber and large baleen plates, these whales were so named because they were considered the “right” whale to hunt. Additionally, they were easy to capture because they are often found near shore, are slow moving and float after death – characteristics which still contribute to their demise.

The 1931 Convention for the Regulation of Whaling, which took effect in 1935, was the first official protection for the right whales. However, neither Japan nor the Soviet Union signed this agreement, making them theoretically free to kill right whales until 1949 when the International Convention for the Regulation of Whaling protected them from commercial whaling. In June 1970, the North Atlantic right whale was listed as endangered under the Endangered Species Conservation Act and the subsequent Endangered Species Act (ESA) of 1973. In addition, the species was designated as depleted under the Marine Mammal Protection Act (MMPA).

Right whales are particularly vulnerable to vessel collisions because they swim slowly at the surface, have dark skin and lack a dorsal fin. The species also feeds, mates, nurses and rests near the surface. Many shipping routes traverse through their critical habitat, such as calving grounds off Florida and Georgia coasts. The 2005-2006 Southeast calving season was particularly devastated as a result of two calves killed January 2006 – one related to vessel strike and one from gillnet entanglement.

Unfortunately, by the time these slow-moving behemoths notice an oncoming ship, it’s usually too late. And because they have dark skin and often linger just beneath the water’s surface, mariners find them difficult to detect. Susceptibility to fixed fishing gear entanglement is also a direct result of their traveling at water’s surface. In the 2009-2010 calving season, five right whales were successfully disentangled, which included the first successfully sedated entangled right whale in the world.

NOAA and the U.S. Coast Guard have taken steps to help reduce the likelihood of ship strikes, which includes teaming up to develop and to implement the Mandatory Ship Reporting System (MSR) in the 1990s. The MSR requires ships greater than 300 gross tons to report to an automated shore-based system when they enter two key right whale habitats – one off the Massachusetts coast and one off the Georgia and Florida coasts. In return, ships receive a message about recent right whale area sightings, precautionary measures to avoid a collision and general information regarding right whales and their ship strike vulnerability. The International Maritime Organization, a specialized United Nations organization, approved the system, and it has been operational since July 1999. 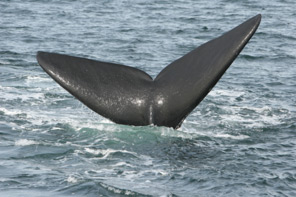 NOAA Fisheries also has issued its own regulations and advisements to help reduce right whale ship collisions, which include recommended lanes in the proximity of the Jacksonville and Fernandina, Fla., and Brunswick, Ga. ports. Research shows that if mariners operate at slow, safe speeds of 10 knots or less and use these lanes as opposed to transiting to and from ports along other pathways, the risk of right whale ship strikes will reduce. The recommended shipping lanes can be found on electronic navigational charts.

Additionally, NOAA Fisheries implemented the Right Whale Ship Strike Reduction Rule (Regulation 50 CFR 224.105) December 9, 2008, which expires December 9, 2013. This rule, based on right whale migration patterns, restricts vessels of 65 feet or greater to speeds of 10 knots or less in seasonal management areas along the East Coast. The speed restrictions apply in Mid-Atlantic areas from Rhode Island to Georgia from November 1 – April 30 and in Southeast areas from Brunswick, Ga., to St. Augustine, Fla. from November 15 – April 15. Area maps and a compliance guide are available at www.nmfs.noaa.gov/pr/shipstrike. NOAA’s Office of Law Enforcement and the U.S. Coast Guard work together to enforce this rule, and failure to comply is a violation of ESA and MMPA. Violators can be cited and fined. 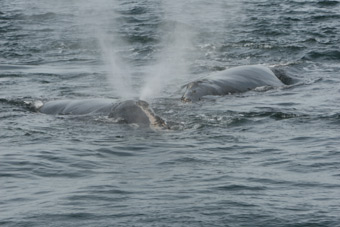 Because right whales are coastal inhabitants, a shore-based sighting network also helps relay locations to mariners. NOAA Fisheries Service encourages the reporting of dead, injured or entangled whales to the Florida Fish and Wildlife Conservation Commission at 1-888-404-FWCC (3922). All live right whale sightings should be reported to 1-877-433-8299 or to the U.S. Coast Guard via Channel 16. Information is transmitted through the appropriate communication network to alert mariners of the whale’s location. When submitting a report, it is important to distinguish right whales from other whales known to frequent Florida coastal waters. From a distance, right whales can be distinguished by their exhale – lung condensation flows out their blow holes in what appears to be a “V” shape when sighted from directly in front of or behind the whale. Right whales also can be identified by a signature feature of large white bumps on the head, called “callosities.” These callosities are used to identify individual whales, which help scientists estimate and keep track of the population.

What You Can Do To Help 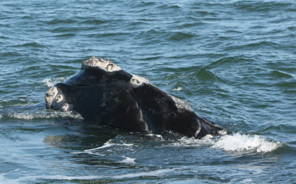 Right whales are teetering on the brink of extinction, and it is everyone’s responsibility to help protect them. Mariners should keep a sharp lookout along the entire East Coast, especially during right whale calving (birthing) season from mid-November through mid-April. In late fall and early winter, pregnant females make their annual north-south migration from their feeding grounds off Canada and New England to give birth and to nurse their young in the warm, calm coastal waters off South Carolina, Georgia and northeastern Florida. This calving area is their only known – and likely only – calving area. 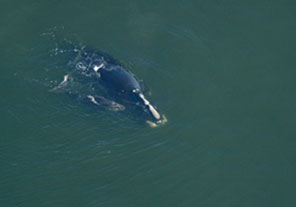 Tips for mariners include:

Mariners are asked to help NOAA Fisheries collect vital information about right whales, dead or alive. Upon sighting one, record the latitude and longitude, or position in regard to buoys, then slowly move away.

In addition, NOAA Fisheries is a sponsor and organizer of the Right Whale Festival held each fall as part of the Jacksonville Beach, Fla. Festival. The objectives are to:

Attendees also gain knowledge of the close approach rule, the region’s importance to right whales, how to recognize and to avoid disturbing mother-calf pairs, the importance of reducing vessel speed when whales are present, and the value of protecting these amazing marine mammals. 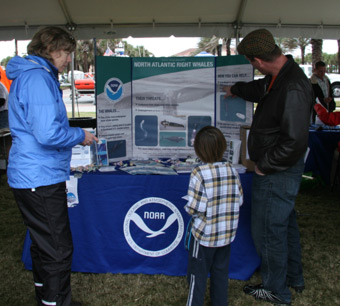