I had the good fortune to meet the publisher of livebetter magazine this past March at the Society of American Military Engineers’ (SAME) Department of Defense Briefings in Arlington, Va. One of her concerns, which I share, has been that the American taxpayer may be getting an incomplete and, in some cases, inaccurate picture of how the U.S. government and the organizations that service it conduct business with regard to the environment. Negative stories on this topic tend to dominate in the mainstream press and, as a result, most people never hear about new or ongoing federal initiatives that benefit the environment and that often have sustainability as a long-term goal. Based on our shared opinion that this information gap needs to be filled, I was honored when she asked me to contribute my thoughts on sustainability from a U.S. Navy perspective.

Defining “sustainability” in a precise way can be challenging, but I’d characterize it as “making efficient use of resources in a way that ensures the availability of similar resources for future generations.” Today, the U.S. Navy defines its role in this regard as “environmental stewardship” – that is, we consider it our responsibility to take environmental factors into account when designing and procuring equipment, maintaining and operating our ships and aircraft, and running our bases.

The idea that the U.S. Navy is an environmental steward comes as a surprise to most people. To be frank, past generations of Sailors and Marines might think it incongruous that a branch of the U.S. armed forces that has focused for over two centuries on training for and fighting conflicts at sea and, that is now integral to our nation’s Global War on Terrorism would consider the environment a high priority. Speaking from personal experience early in my naval career, I can remember the days when everything we used aboard ship was tossed overboard with little understanding of the impact it might have on the environment. However, today’s Sailors and Marines are operating with a different mindset. The current generation of men and women who are working their way through our ranks was raised with an environmental ethic from childhood, complete with curbside recycling bins, Earth Day celebrations and backyard decks made from recycled plastic lumber. The Department of Navy leaders who make policy decisions now ensure that environmental stewardship is an integral part of our planning and execution… because it’s the right thing to do.

It would be a daunting undertaking to effectively summarize all of the Navy’s environmental stewardship initiatives in a single article. As a starting point, it may be helpful to bear in mind that we commit about $600 million per year to environmental programs. Our main objective in running these programs is ensuring sustained compliance with the law, which in turn enables us to pursue our primary mission of national defense. Believe it or not, without clean air and water permits, appropriate handling of hazardous materials, proactive management of threatened and endangered species and cooperation with environmental regulatory agencies, the U.S. Navy would ultimately find it very difficult to get our ships out to sea and to keep our aircraft flying.

For this particular column, I’d like to offer some highlights of how we minimize our ships’ impact on the environment at sea. The history of our approach to using “green” technologies on our ships is a bit complex, but the two essential drivers were: (1) the need to comply with new environmental regulations and executive orders beginning in the 1970s and (2) studies that consistently showed we could achieve significant cost savings by better managing our various waste streams.

One of our earliest initiatives, starting in the 1970s, was to install collection and holding tanks on our ships to prevent the discharge of raw sewage into coastal waters and in port. To avoid the accidental discharge of oil from our bilge water, we installed oil/water separators and oil content monitors in the 1980s. During this timeframe we began using anti-fouling coatings that were free of tributyl tin on our ship hulls to reduce hull drag, corrosion and associated fuel consumption without contaminating seawater. Today, we exclusively use topside shipboard paints with reduced air emissions (including volatile organic compounds or VOCs) to enhance air quality in port.

Also in the 1980s, we began incorporating hazardous material inventory control systems aboard our ships to optimize the use and minimize waste disposal costs for those chemicals. During this time we conducted a review of shipboard requirements for the various hazardous materials we use. As a result, we have since reduced the types of hazardous materials aboard ship by 66 percent, and expect to reduce that number by an additional 15 percent to further protect the environment and to enhance safety for our Sailors and Marines. 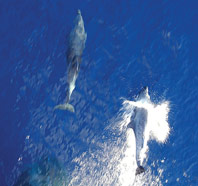 In the 1990s, we developed and installed plastic waste processors aboard ships to heat and to compress plastic trash for safe storage at sea: those two steps allow us to operate without discharging plastics into the ocean. We store these 18-inch plastic “hockey pucks” aboard and dispose of them properly when we return to port. Since installing this technology, we’ve begun seeking Earth-friendly alternatives to plastic food storage containers, such as high-tech biodegradable films, and are investigating ways to eventually recycle the disks we generate. Another 1990s project was to install pulper/shredder machines aboard our ships to grind up biodegradable materials (food, paper/cardboard, metal and glass) for safe discharge.

We are presently in the process of converting all of our chlorofluorocarbon (CFC) air conditioning and refrigeration systems to non-CFC technology to help protect the ozone layer. Beyond these shipboard technologies, we have specific procedures and initiatives that protect the ocean environment as well. For example, we purge our ballast tanks twice at least three nautical miles from shore to avoid introducing invasive species when we come into port. We respond to oil spills world-wide and, in fact, cleaned up 50 percent of the oil from the Exxon Valdez spill in 1989. We stay away from coral reefs with our ships and serve as the Department of Defense representative on the U.S. Coral Reef Task Force.

We also use the best available science to minimize conflicts with marine mammals. We avoid known marine mammal habitat areas when practical, post lookouts specifically to detect them and fund more than $10 million in research annually to increase knowledge about how marine mammals hear and how they may be affected by sound. The marine mammals and sonar issue is a complete topic for another day, but for now suffice it to say that we take our responsibility to protect marine mammals very seriously and are working to further minimize our potential effects on them while ensuring the safety of our Sailors and Marines.

I’d like to conclude by thanking livebetter magazine and its publisher for the opportunity to contribute to this new and exciting venture. I believe the public deserves to see the whole picture, and we in government have a responsibility to share information about the sustainability programs the taxpayer ultimately pays for