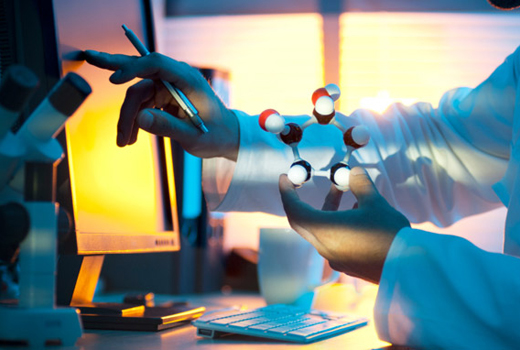 According to projections by the International Energy Agency (IEA), for at least the next 18 years – until 2030 – approximately 80 percent of the world’s energy consumption will be derived from fossil fuels. Experts predict that petroleum, natural gas and coal will remain the primary energy sources because they are abundant, inexpensive and familiar. World coal consumption, according to the U.S. Energy Information Administration (EIA), is estimated to increase by 50 percent to 209 quadrillion Btus by 2035. In fact, EIA reports that the U.S. derived 21 percent of its primary energy source from coal in 2011, with coal currently generating one-half of the nation’s electricity. However, coal use is controversial because of its associated environmental concerns.

Behind meticulously color-coded, tagged stacks of scholarly papers, shelves of textbooks and dozens of student dissertations, Liang-Shih Fan, PhD, sits enthusiastically at his desk scrawling down new ideas and notes at his seemingly disarrayed office at Ohio State University (OSU). When prompted, he gestures energetically to the poster depicting one of his “crowning” accomplishments, the syngas chemical looping (SCL) technology. Fan, OSU professor of chemical and biomolecular engineering, has reason to be excited. As principal investigator on the SCL project, he is leading a joint development effort to scale-up chemical looping technology at the U.S. Department of Energy’s (DOE) National Carbon Capture Center (NCCC), operated by Southern Company in Wilsonville, Ala.

In March 2012, Ohio State and Southern Company signed a collaborative testing agreement to demonstrate the high pressure syngas-to-hydrogen chemical looping process. By early 2013, the construction of a 250 kWth SCL pilot plant will be constructed at the NCCC with sponsorship by DOE’s advanced research agency, ARPA-E. Chemical looping is an innovative process for effectively converting carbon-based fuels to electricity, hydrogen and/or liquid fuels while simultaneously capturing all the carbon emissions. This process could achieve one of the lowest cost and most efficient technologies yet developed for CO2-free energy from coal and biomass. 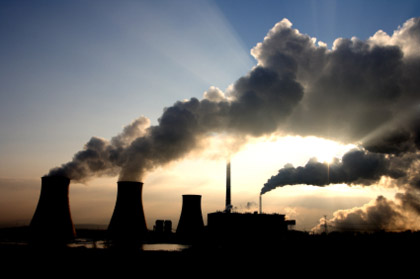 Such a novel project falls within the scope of ARPA-E goals, which was created to help close the commercialization development gap for high-risk technologies. According to ARPA-E Director Arun Majumdar, “ARPA-E’s role is to focus on energy technology breakthroughs – the quantum leap breakthroughs that don’t yet exist but have the potential to make today’s technologies obsolete.”

For Fan, the promising SCL pilot project resulted from a natural evolution of his lifelong passion in research coupled with his devotion to clean fossil fuel conversion and environmental solutions. “We’ve studied it all – SO2, H2S, NOx and particulates for both air and water pollution,” explains Fan.

Rooted in fundamental research, Fan started in the 1970s with his doctoral thesis on sulfur removal by absorption at West Virginia University (WVU) with his inspiration-mentor, the late renowned Jimmy Wen, PhD, “the King of Coal,” as Wen was known within the research field.

Much of Fan’s research focuses on chemical engineering fundamentals, such as understanding particle science and technology, which can solve real-world pollution control problems. At Ohio State, he continued his work with sulfur removal using limestone. Then he progressed into research on SO2 capture using precipitated calcium carbonate and toxic heavy metal (arsenic, selenium and mercury) removal.

By the late 1990s and early 2000s, Fan and his research group successfully demonstrated the scale-up of these clean coal technologies, such as the Ohio State Carbonation Ash Reactivation (OSCAR) process for flue gas desulfurization and toxic heavy metal removal, and the CARBONOX process for NOx removal from the flue gas of activated carbonaceous fuels as coal char. With increasing public concern about CO2 emissions, CO2 removal became a natural research interest for Fan and his research group starting in 1998. This resulted in development of the carbonation-calcination reaction (CCR) process for CO2 removal. More recently, the calcium looping process and the iron chemical looping processes – SCL and coal-direct chemical looping (CDCL) – were developed for CO2 capture.

Fan’s research has garnered widespread attention and support from both inside and outside the Ohio State community. According to Gordon Gee, PhD and president of Ohio State University, this type of research is important for the state of Ohio and the nation. “Clean coal is important to me as a former president of West Virginia University and current president of OSU. Coal remains a driving force in our country. It’s still very much in use, but we must use it efficiently and cleanly. The work that Fan does is important to sustaining our future, and it’s critical to our national energy policies,” says Gee. 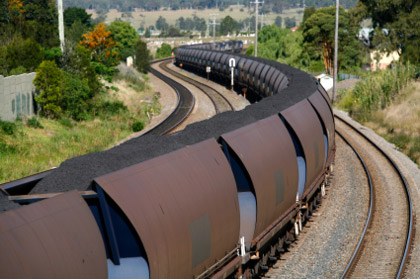 © iStockphoto.com/BeyondImages|A train carrying a load of black coal snakes its way
downhill towards the port.

Situated in a coal state – the 4th-ranking state in coal consumption – has helped Fan tremendously. He praises the continuous, “non-stop” support by the Ohio Coal Development Office (OCDO), which is part of the Ohio Department of Development. However, for Fan, cleaning the nation’s air and providing an efficient, affordable energy source are not the only reasons to pursue carbon capture and sequestration (CCS) technologies. As an academic, he invests considerable time in the development and education of his students. He credits his success to creative innovation and his productive research team of “wonderful minds, intelligent minds [that become] leaders in many sectors, academia and industry.”

To ensure U.S. energy demands and to further national energy security issues, Fan emphasizes the importance of keeping technologies homegrown. “With growing global technological competition from Europe and China, we must stay at the forefront of innovation. With the SCL process, we have the potential to lead in CCS technology in the U.S. and around the world,” he comments.

As the ultimate technology in DOE’s Carbon Emission Control Technology Roadmap, chemical looping technology utilizes a looping reaction design to efficiently decompose carbonaceous fuels via multiple sub-reactions to yield desired products, e.g., electricity and hydrogen. Chemical looping concepts date back to the 1900s with the steam-iron process for hydrogen generation. The full environmental benefits of such technologies were reported in the 1990s by researchers at the Tokyo Institute of Technology. Chemical looping technology, however simple in its concept, has not been commercialized due to various challenges, including looping particle performance and system design. Further, without the need for CO2 emissions reduction and with low carbon conversion efficiencies, initial chemical looping systems were not economically attractive.

The Ohio State syngas iron looping process circulates various iron oxides through different reaction zones under reduction-oxidation conditions. In the reducer, carbon-based fuels, such as natural gas or coal, are first oxidized to form CO2 and then captured and sequestered. During this step, the iron oxide is reduced to its elemental iron form. After the reducer, the elemental iron is re-oxidized by steam to produce hydrogen and an intermediate iron oxide form. The intermediate iron is combusted back to the reactive form, which goes back to the reducer zone to repeat the cyclic process and complete the loop.

The patented SCL process converts coal syngas, a mixture of CO and hydrogen, to fuel flexible products. The SCL unit is unique as it can allow both electricity and/or hydrogen production as compared to other chemical looping technologies. Fan and his team of students and post-doctorate associates have successfully demonstrated the production of pure hydrogen and the capture of carbon dioxide in more than 300 hours of long-term sub-pilot demonstrations at the 25 kWth-scale at the Columbus, Ohio, research laboratory.

Independent studies by SAIC and Noblis report more than 10 percent efficiencies compared to traditional systems for electricity, hydrogen and liquid fuel generation. According to these independent studies, the SCL process is estimated to be 7 to 10 percent more efficient in producing hydrogen than conventional processes and up to 7 percent more efficient in producing electricity than the integrated gasification combined cycle (IGCC), a technology for converting coal into syngas. The hydrogen generated in the chemical looping gasification system can also be used as a potential fuel source or as a feedstock in the petrochemical industry. For example, hydrogen can be used in the Fischer-Tropsch (F-T) reactor to enhance liquid fuel yield in the coal-to-liquids (CTL) process, according to the independent study conducted by Noblis.

In a hydrogen economy where hydrogen can be used as fuel instead of gasoline, the implications are far-reaching, as these technologies are capable of powering neighborhoods and fueling vehicles with minimal greenhouse gas emissions, according to SCL Project Manager Bob Statnick, PhD, Clearskies Consulting. He explains, “We need a portable fuel that can be used for cars and trucks that does not emit CO2. The syngas to produce hydrogen process can achieve this.”

From Statnick’s calculations, hydrogen fuel is more economical as compared to rising gasoline prices. As a result, he adds, “Gasoline at $4 per gallon is equivalent to hydrogen at $1.92 per pound. This means that if one converted hydrogen at this price, one would be able to displace gasoline at current prices.”
Chemical Looping Future
Ohio State’s pilot demonstration project will be the largest scale-up of the chemical looping gasification technology for hydrogen generation from coal and biomass. The NCCC pilot unit will take syngas from Southern Company’s transport gasifier to capture CO2 for sequestration. The project is co-funded by DOE’s Advanced Research Projects Agency-Energy (ARPA-E) and the ODOD’s Office of Energy through the OCDO as well as industrial partners Babcock & Wilcox, CONSOL Energy Inc. and Clear Skies Consulting. Fan and his partners plan to complete commissioning and to begin operating the pilot demonstration during 2013. They hope to demonstrate the SCL technology for more than 1,000 hours, which will allow for improved economic feasibility analyses for future scale-up demonstrations. Successful implementation of the SCL pilot-scale unit will “drastically reduce greenhouse gas emissions and demonstrate the potential for commercialization,” says Fan.

For Fan, the SCL unit is the culmination of years of “fundamental research and integrated large scale process development that can help bring chemical looping technology a step closer to commercialization.” Fan credits science and engineering to resolve environmental concerns, as “creativity and innovation will help develop new processes to solve many of our global issues.” But, he reveals, his secret to success is focusing his fundamental research on “developing and building a product.” Fan says he has a “a mission to commercialize chemical looping technology . . . and a vision that industry will be able to apply an entirely new technology, which can produce fuels, chemical and electricity while simultaneously capturing CO2.”

Much of Fan’s vision involves the potential for the SCL process to change environmental practices in the fossil fuel industry. He explains: “The magnitude and implications of pollution control of CO2 capture are huge. NOx and SOx [pollution] pale in comparison. We need creative technologies, such as SCL, that can be successful and make a huge contribution to mankind. Commercial-scale chemical looping technologies will be the game changer that will pave the way for a cleaner, more sustainable future.”

Majumdar agrees and adds, “[ARPA-E] invests in technologies that are too risky for the private sector. If Fan and his partners succeed, these technologies will pave the foundation for entirely new industries that could provide greater economic and national security for the United States.”