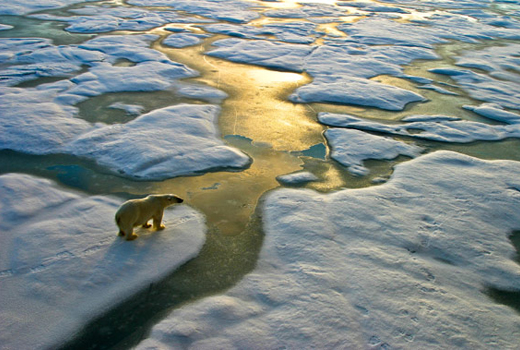 The summer of 2007 was a memorable time in the Arctic – a season of profound events and extremes. The 4th International Polar Year (IPY) was in high gear. Russia placed a flag on the seafloor near the North Pole. Melting on the Greenland ice sheet occurred at the highest elevations recorded during the satellite observation era1. The largest wildfire in Alaska occurred on the treeless tundra of the North Slope2. And, if that weren’t enough, shortly before summer turned to autumn the sea ice on the Arctic Ocean reached a record minimum extent3. This caught even the most seasoned observers off-guard. 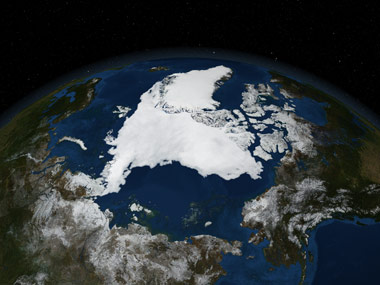 Summer 2007 confirmed what many already believed, convinced others who were less certain and generally raised awareness that something of great significance is occurring in the Arctic. That is, the Arctic environmental system is changing fast – faster, in fact, than anywhere else on Earth.

This is important for the entire planet, for it must be understood that the Arctic, and Antarctica, are integral components of the global environmental system. They both affect and are affected by lower latitude processes and events in a complex system of long distance teleconnections.

The rate and magnitude of system-wide changes occurring in the Arctic and the consequences for the Arctic and lower latitudes are forcing previous assumptions and understanding to be questioned. In addition, they’re highlighting the need for a strengthened observing capability for better detection and increased scientific research to improve understanding, forecasting and prediction. This is vital for identifying and implementing responses that meet the needs of a diverse stakeholder group, which includes scientists, northern residents, non-governmental organizations (NGOs), business and industry, and government policy and decision makers. 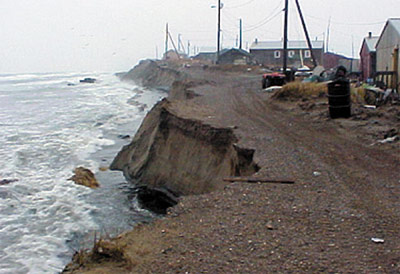 If sea ice-albedo positive feedback and its consequences seem rather esoteric, there are more immediate and practical implications of shrinking sea ice. For example, imagine life in Shishmaref, a community of approximately 500 Iñupiaq people in westernmost Alaska on the Chukchi Sea coast. The village is threatened as the shoreline recedes at an alarming rate because the longer open water season and fetch are increasing wave action and erosion of warmer beach and bluff sediments. The Iñupiaq , like most Alaska Natives, continue to practice a traditional way of life that includes subsistence hunting. Among the animals they hunt are walrus, ringed seal and polar bear, which, it is feared, will be adversely affected by loss of their sea ice habitat.

In addition, the ice cover retreat is attracting cruise ships to the Arctic as people seek new adventures and eco-tourism experiences. But, not every cruise goes according to plan. For example, when the MV Clipper Adventurer ran aground in August 2010 on an uncharted rock in the Northwest Passage, it required assistance from the Canadian Coast Guard icebreaker Amundsen. The latter had to interrupt a scientific investigation and divert more than 500 km to take 118 passengers off the stricken vessel. This highlighted the dearth of accurate bathymetric charts and raised questions about rescue capacity.

It is not only cruise ships that are becoming more common in the Arctic Ocean. In late summer 2009, two Beluga Shipping GmbH vessels, escorted by two Russian icebreakers, negotiated the Northern Sea Route, north of Eurasia, carrying inter-continental commercial cargo from South Korea to Novy Port in Siberia before continuing to Rotterdam, Netherlands. The prospect of further ice retreat and more open Arctic water in the future5 is stoking speculation of inter-continental commercial shipping along a trans-Arctic route that is more direct than the Northern Sea Route.

Sea ice retreat also is encouraging speculation of an increase in natural resource development, e.g., oil, gas, minerals and fish. The predicted increase in Arctic shipping and industrial activity draws attention to a number of important issues that need to be addressed. They include: search and rescue, oil spill preparedness and response, a marine transportation system, boundary disputes, maritime domain awareness, and national and homeland security. These issues require both the U.S. Navy and the U.S. Coast Guard to assess their capabilities and capacity for increased Arctic engagement and to learn more about the operational environment.
The U.S. Military, Science and the Arctic Operational Environment
In the past, U.S. military provided considerable support for scientific research in the interests of understanding the Arctic operational environment. 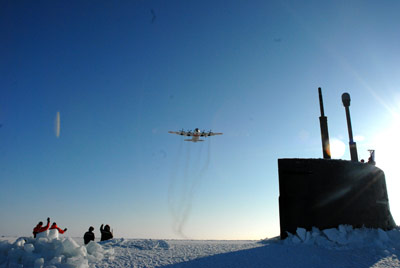 For example, as long ago as 1947, the Office of Naval Research (ONR) established the Arctic Research Laboratory (ARL, later NARL: Naval Arctic Research Laboratory) in Barrow, Alaska. It remained an ONR-supported operation for 33 years, enabling research at sea and on land. Both ONR and the U.S. Air Force operated research stations on ice islands (tabular icebergs), and ONR placed many research camps on sea ice floes. The U.S. Navy Arctic Submarine Laboratory also has run many experiments at ice floe camps – most recently in March 2011 in support of the submarine fleet. The submarine USS Nautilus (SSN-571) made the first submerged, under-ice Arctic Ocean crossing in August 1958. Since then, the Navy has continued its operational mission under the ice and, via the Federal interagency SCICEX (SCience ICe EXercise) Program, has made vessels available as scientific observing and research platforms. This led to the mid-1990s discovery that the average draft (a proxy for thickness) of Arctic Ocean sea ice was 1.3 meters (40 percent) less than it was during the period 1958-19774.

In response to growing evidence for global climate change and recognition of its potential U.S. Navy impact, Task Force Climate Change (TFCC) was created by Chief Naval Officer Admiral Gary Roughead in May 2009. (Read this issue’s lead story for an inside look at ADM Roughead.) TFCC’s first product, the Arctic Roadmap published November 20096, makes clear that “the Navy must consider the changing Arctic in developing future policy, strategy, force structure and investment.” More recently, the Arctic’s growing relevance was affirmed by the report on National Security Implications of Climate Change for U.S. Naval Forces8.

The Arctic Roadmap describes five focus areas, each with a desired effect, action items and objectives. The desired effect of the fifth focus area, Environmental Assessment and Prediction, is: “The Navy understands the changes and projections for the Arctic environment, specifically when and to what extent ice will recede allowing for increased maritime access to the Arctic.” The Environmental Assessment and Prediction objective is: “To provide Navy leadership and decision makers a comprehensive understanding of the current and predicted Arctic physical environment on tactical, operational and strategic scales in time and space.” And, as Rear Admiral (RADM) Dave Titley, U.S. Navy Oceanographer and TFCC Director, pointed out in a recent issue of this magazine7, all of this must be “based on the best and most current science.”

Arctic and Global Prediction at ONR

In response to the Arctic Roadmap and RADM Titley’s call for the best and most current science to inform recommendations to senior Navy leadership, ONR has created new thrusts and re-aligned existing efforts to form its new Arctic and Global Prediction Program. It has three goals: 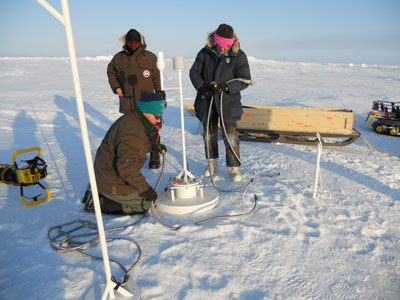 A prime scientific motivation for the new program is that sea ice is retreating faster than predicted by computer models5. This indicates our knowledge and understanding of Arctic ocean-ice-wave-atmosphere processes, interactions and feedbacks remain incomplete. They need to be investigated and results included in computer models for improved predictions. Accordingly, in February 2011 the Arctic and Global Prediction Program announced a 5-year Department Research Initiative (DRI) known as “Emerging Dynamics of the Marginal Ice Zone” (MIZ). Its goal is to improve the physics knowledge and understanding of the retreating summer ice edge and MIZ in the Beaufort and Chukchi seas. The approach will integrate data from in situ sensing platforms, remotely-sensed observations and process models to develop a comprehensive picture of open-ocean, ice edge and MIZ processes, interactions and feedbacks as ice retreats. Results will be used to evaluate performance of computer prediction models.

The Arctic and Global Prediction Program will also contribute to SCICEX as the Navy makes time available for Science Accommodation Missions (SAMs) during submarine transits across the Arctic Ocean. Anticipated measurements during SAMs include: sea ice draft, ocean biology and chemistry, and hydrography and bathymetry. These data will contribute to the Arctic Observing Network (AON).
AON, the Study of Environmental Arctic Change and Partnerships
AON is an integral component of the Study of Environmental Arctic Change (SEARCH), a Federal interagency program. AON is fundamental to SEARCH, as it provides data for one of the most data-sparse regions on Earth. Researchers will use those data for analysis and modelling to improve understanding, forecasts and predictions. In turn, policy and decision makers need observations and research results to help identify and implement appropriate responses to the changing Arctic environment.

In his article about TFCC and the Arctic Roadmap8, RADM Titley wrote about the importance of partnerships, commitment and the need to invest resources. These are essential ingredients for SEARCH to succeed and to realize its full potential at national and international levels. International partnerships are vital if we are to succeed in observing, understanding and responding, on a pan-Arctic scale, to the rapidly changing environmental system. 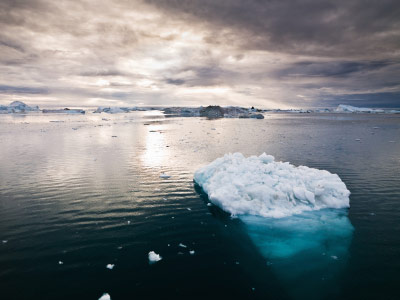 SEARCH will contribute to the International Study of Arctic Change, an initiative of the International Arctic Science Committee (IASC), and AON will be a major component of Sustaining Arctic Observing Networks (SAON). Sponsored by the Arctic Council and IASC, SAON aims to develop a pan-Arctic, multi-nation observing network that will realize Arctic and global value-added services and societal benefits by making data and products freely and openly available in a timely fashion.

ONR is committed to investing resources in Arctic Ocean observing and research that meet U.S. Navy needs and also contributes to the broader goals of AON and SEARCH. ONR is also committed to identifying synergies and developing partnerships with other U.S. Federal agencies and international programs in order to achieve pan-Arctic observations, scientific understanding and improved predictions of the changing environmental system.