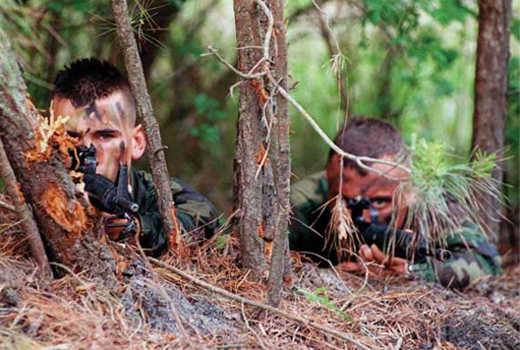 Astory shared among U.S. Marine Corps (USMC) conservation managers is that of being asked at a social event “What do you do for a living?” • After answering that we manage military installations’ natural or cultural resources, we’ve encountered surprise and cynicism with replies like “The military cares about the environment?” and “The Marine Corps employs conservation professionals to work on their installations?” • It’s easy to understand both reactions, given the conflicting perspectives presented in the media regarding the military’s commitment to the environment.

To be honest, if someone had posed those questions to us while in graduate school, most would have sided with the skeptics. Working as a conservation manager for the military was not our anticipated career path. Instead, we became teachers, researchers or consultants before eventually landing at a military installation. Our perception, and one that still persists within the academic community, was that environmental protection and resource conservation played no part in the military’s mission. That perception is far from reality.

Just as the concerns of the American public have evolved to include climate change, resource conservation, carbon footprint and preservation, so has the mission of the United States military services. The current view of Marine Corps military readiness embraces stewardship of our training lands and the resources they support. To be prepared to operate in any potential setting, the Marines need access to a variety of landscapes and facilities. Our ability to provide quality training lands hinges upon our ability to manage them effectively. Accordingly, the Marine Corps must ensure that lands and resources entrusted to its care remain intact and available for future generations. Marine Corps conservation managers include some of the most qualified, committed and passionate people in natural and cultural resources management.

It’s a little-known fact that military installations, including those managed by the Marine Corps, are among the best-managed lands in the United States with a significant diversity of resources. The USMC is the custodian and environmental steward of more than 2.5 million acres of some of the most ecologically sensitive, diverse areas within the U.S. and around the world. 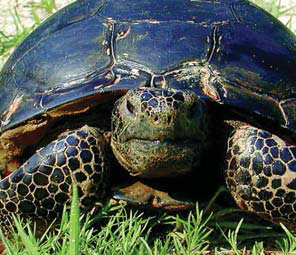 This classification includes portions of the Sonoran Desert, numerous fresh and saltwater wetlands, and portions of Asia’s last remaining subtropical rain forest. These spaces provide a habitat for many threatened and endangered species. In fact, in numerous regions military installations have become the only open, undeveloped areas that can host the required habitats for these species as forests and fields give way to housing developments, highways and strip malls outside military gates. Ironically, most of the species thrive because of military land management rather than in spite of it.

Natural resources on Marine Corps installations are managed through the implementation of detailed plans called “Integrated Natural Resources Management Plans or INRMPs,” which outline goals, objectives and projects. Management actions include use of proven best management practices from the military, academia and other organizations as well as regular consultation and coordination with outside agencies. INRMP management decisions represent the mutual agreement of an installation, the U.S. Fish and Wildlife Service (USFWS) and the state fish and wildlife office after evaluating the conservation, protection and management of natural resources. Specific program areas include threatened and endangered species, fish and wildlife management, invasive species control, wetlands and floodplain preservation, coastal and marine resources conservation, forest management and wildland fire management.

On the Barry M. Goldwater Range (BMGR) near Yuma, Ariz., the Marine Corps works in partnership with the Arizona Game and Fish Department, the Air Force, the Mexican government, the USFWS and other stakeholders on the Sonoran Pronghorn Recovery Initiative. The Sonoran pronghorn appears to be dependent upon habitats within the BMGR and neighboring national refuges. In fact, the BMGR accounts for 40 percent of the pronghorn’s range in the United States. Within the past five years, the Initiative has provided the following for the pronghorn: waterholes to use during periods of drought, irrigation plots to support grasses and shrubs for food, a breeding enclosure to protect fawns from coyote predation and a breeding program to integrate the genetically diverse Mexican Sonoran pronghorn with the U.S. Sonoran pronghorn.

In California both the Marine Corps Air Ground Combat Center (MCAGCC) Twentynine Palms and the Marine Corps Logistics Base (MCLB) Barstow provide protected habitats for the threatened desert tortoise. Both installations work in partnership with the USFWS to protect existing habitat and desert tortoise populations from off-road vehicle use, disease and predation. In 2005 MCAGCC Twentynine Palms constructed the Tortoise Research and Captive Rearing Site to contribute to the recovery of the desert tortoise. MCLB Barstow instituted a desert tortoise education program for all rifle range users, newly assigned base personnel, contractors and area visitors. 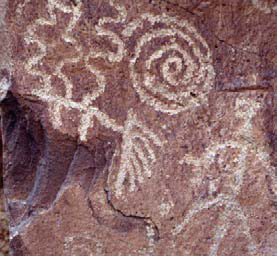 Marine Corps installations also contain a diversity of cultural resources, including archaeological sites and collections, historic buildings, structures and objects, cultural landscapes and resources of traditional, religious and cultural significance to Native American tribes and to Native Hawaiian organizations. These resources reflect thousands of years of human activity, which include important developments in our nation’s history and the military’s role in that history, thus embodying our shared historical experiences.

Cultural resources are assets. Their appropriate administration can benefit and meet mission needs while enhancing the quality of living and working environments. Accordingly, their conservation and proper management is fully integrated into USMC operations and training programs. Specifically, cultural resources on Marine Corps lands are administrated through the implementation of Integrated Cultural Resources Management Plans (ICRMPs), standard operating procedures, agreement documents with management prescriptions and national program alternatives. Program areas include inventory and evaluation, protection and monitoring, consultation and outreach, and interpretation.

The USMC manages four National Historic Landmarks: the Marine Corps Barracks in Washington, D.C.; the Santa Elena site at Marine Corps Recruiting Depot (MCRD) Parris Island in South Carolina; Rancho Las Flores at MCB Camp Pendleton in California; and the runway, apron and hangars associated with the Dec. 7, 1941 attack on former Naval Air Station Kaneohe at MCB Hawaii. Each of these resources is managed and interpreted in consultation with the National Park Service and state historic preservation offices.

Historic districts and individual historic buildings also are common on Marine Corps installations, including the 110-acre National Register of Historic Places district at MCRD San Diego. The 25 buildings and associated landscape elements that contribute to the district were planned and designed by renowned architect Bertram Grosvenor Goodhue between 1917 and 1921. A comparable district of administrative buildings and barracks, all designed by Albert Kahn in the early 1940s, exists at MCB Hawaii. Other historic districts and buildings form part of MCB Quantico in Virginia, MCB Camp Lejeune in North Carolina, MCRD Parris Island in South Carolina and MCB Camp Pendleton in California. Many of these districts are interpreted through brochures, web sites or walking tours.

Archaeological resources also exist at 20 of the 22 active Marine Corps installations and range from small, ephemeral sites, where people stopped to make tools, to quarries, house sites, villages, agricultural terraces, mines, military camps and fortifications. Examples of rock art (petroglyphs and pictographs) are found at MCAGCC Twentynine Palms, MCB Camp Pendleton and MCLB Barstow. Locations and landscapes of interest to Native American tribes appear on many Marine Corps installations and include archaeological sites, burial sites and rock art. The Mokapu Peninsula on the island of Oahu, managed as part of Marine Corps Base Hawaii, is a sacred and traditional landscape for Native Hawaiians.

MCB Quantico recently nominated three Civil War camp sites, associated with the “Battle of the Potomac” from May 1861 to March 1862, to the National Register. Two of these sites are the largest intact Confederate winter camps from that period. Historical information from official records and maps, along with archaeological data, was used to produce a GIS-based KOCOA (Key terrain, Obstacles, Cover and concealment, Observation points and Avenues of approach) analysis of the Battle of the Potomac campaign for use by military historians and researchers.

Interpretive efforts at Marine Corps installations include permanent exhibits on prehistory and history installed in the Headquarters building and in the station library at MCAS Beaufort, a restored landscape and exhibit about the Second Prince William County Courthouse at MCB Quantico and an interpretive trail on the history of the Gila Mountains’ El Fortuna Mine within the BMGR. In addition, MCAS Miramar has loaned artifacts from several of its historic military sites to a University of California – San Diego Medical Library interpretive display. Several installations have published histories and guides relating to cultural resources as well as created posters, bookmarks and web pages with virtual tours.

The Marine Corps motto “Semper Fidelis” has always underscored the Marines’ core values of honor, courage and commitment. These values extend into every aspect of a Marine’s life, including a commitment to sustaining our nation’s lands and resources for the future. The Marine Corps of the 21st century acknowledges its stewardship and resource protection responsibilities while recognizing that a country worth fighting for is a country worth preserving.