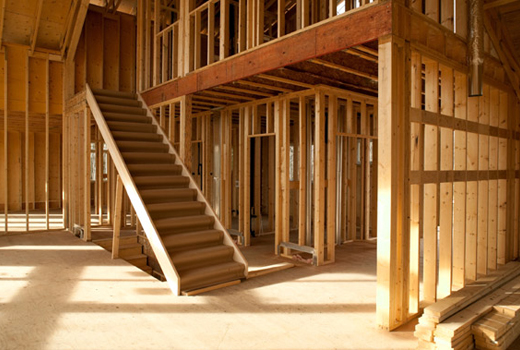 “To A Billion One:” A Global Affordable Housing Lesson

by Matthew Leshetz, Crane Group International, LLC April 15, 2012 Comments Off on “To A Billion One:” A Global Affordable Housing Lesson  Columns, Professional Perspective

As a child I learned about the Hebrew expression, “Tikun Olam.” It means repairing the world, which typically means giving Tzedakah, or charity. It is a central tenet of what it means to be a good Jew and a good person. I have since learned other religions espouse similar principles, no doubt, because it is so important to understand the value of giving and helping others. Little did I know this childhood lesson would prove meaningful in my professional life as a builder and, now, a manufacturer of affordable homes.

In studying these ideas, I recall a teacher asking, “Would it be better to give $1 to a billion people or $1 billion to one person?” As a child my first response was, “I think it would be best to give $1 billion to me!” But, as I seriously considered this question, and wrestled with the options, several conflicting arguments came to mind. While certainly giving $1 would have real value to many people throughout the world, it would soon be spent and their lives no better off. What a shame to take $1 billion and dilute its value to the point of, possibly, having no value at all. On the other hand, giving one person $1 billion might allow this great sum of money to have great impact. He/she could start a foundation or donate a building or hospital wing, which would, in turn, help a large number of people. Clearly, this must be the answer; but, I was dead wrong. The correct answer was “to a billion one.” This lesson has stayed with me and helped form my company’s guiding mission.

I have learned that giving away any sum of money to a single person or entity would, in fact, dilute its impact. By giving a single dollar to a billion people a full one billion people would receive and, even more, witness an act of human kindness. Such an act, no matter how modest in size or scope, has the potential to uplift a human spirit – even if this act has no discernable financial impact. The act itself reminds us there are those who do and give what they can in an effort to help improve another person’s life. In addition, such an act may spark a sense of self-esteem, improving both the recipient’s and the giver’s life. This approach has the chance to produce a true multiplier effect, the results of which are boundless.

In our approach to dealing with the world’s seemingly intractable problems, we have clearly made the decision to metaphorically give the wrong way – to make the $1 billion gift, so to speak. We have chosen to take hard-earned taxpayer dollars and channel them towards individuals and groups, whom we hope will use the money for its intended purpose. We would be better served by cutting through and directly helping people in need. Even if this help is small in scale, it may have a massive impact.

In Africa, for example, we have spent decades believing that giving aid would increase the quality of life of the continent’s inhabitants and, yet, it has done no such thing. Bob Geldof, the Irish songwriter and philanthropist of Live Aid, recently gave a speech in which he implored the West to reconsider giving aid and its apparently ineffective efforts in Africa. In the past 30 years, leaders have enriched themselves beyond imagination while people’s suffering has grown immeasurably worse. That said, and despite our best efforts, areas of Africa are slowly rising. While some may congratulate themselves on gifts of aid, this is largely due to the resilience of the people themselves. If we were able to tap into this basic human yearning for freedom and equality, we could start to set in reverse motion some of the truly awful statistics. One such example is the global housing crisis. 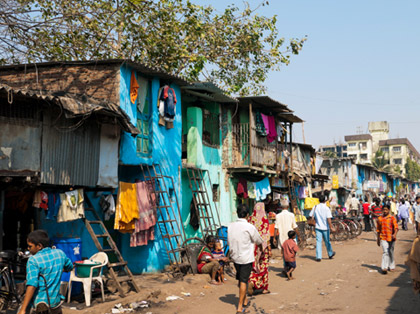 © iStockphoto.com/holgs|Dharavi Slum, Mumbai, India – People walk past some brightly coloured houses in the central part of the slum.

According to Habitat for Humanity, one billion people (roughly 32 percent of the global urban population) now live in urban slums. Some studies show this number ballooning to two billion by 2030. As defined by UN-HABITAT’s Global Urban Observatory in 2008, “a slum household is defined as a group of individuals living under the same roof lacking one or more of the following conditions: access to improved water, access to improved sanitation facilities, sufficient living area (not more than 3 people sharing the same room), structural quality and durability of dwellings and security of tenure. . . . [That said] defining slums by household-level shelter deprivation, however, does not fully capture the degree of deprivation experienced by a given household or slum community . . .”

We all agree this is not acceptable because it is not only a basic human rights issue but also an international security issue. Ignored and maltreated people will, at some point, change their form of protest from shrieks of anger to blasts of gunfire. While the academics behind the issue are clearly important, we can look to the simple ancient lesson of “to a billion one” as being instructive in our approach to meeting the global demand for affordable housing. We have to somehow bypass the traditional avenues of giving aid intended to result in affordable housing to simply providing affordable housing directly to the people. If many people were to receive the “gift” of an affordable house (i.e. a reasonably priced house given local economic metrics), imagine how that could act as a building block and accelerator for real change in the world.

This, of course, does not mention the “good business” of affordable housing, such that it acts as a form of wealth accumulation, job creation, access to credit and attraction for economic investment and development. Affordable housing also contributes to thriving school systems and community organization, and it is a catalyst for civic activism and a stimulus for community-based organizations. The bottom line is that safe homes build social stability and security.

In addition to rapidly deploying homes throughout the world, the challenge is to do this in a cost-effective manner while also respecting basic human dignities. This refers to reasonable room sizes, circulation, privacy, cleanliness, etc. With adequate research, hard work, team work and creativity there is a way to deliver on such requests. Crane Group International, LLC, (CGI) is one company working to make these requests a reality. It was founded on the concept of “to a billion one,” and its plan is to send houses and hope to areas of the world most in need of adequate shelter.

CGI uses a panelized wall system and innovative containerization assembly process to mass produce all-inclusive, easy-to-assemble, highly durable, energy-efficient and affordable residential and commercial structures that can be shipped to any part of the world in standard shipping containers. The company’s state-of-the-art manufacturing facility in Hillside, New Jersey, is capable of producing approximately 30 homes per day, which translates into roughly 7,000 homes per year – based on a 1,000 sq. ft. detached single-family ranch house. The on-site assembly process is extremely simple and a typical home can be completed and ready for occupancy in approximately two weeks. This type velocity is a great benefit to local communities in dire need of large quantities of homes in very short periods of time. Installation can typically be performed by an unskilled labor force, supervised by a qualified local contractor or a CGI-trained supervisor. Skills learned from the assembly of one structure are easily transferable to the building of additional structures and entire communities.

In addition, CGI can build commercial structures, such as schools, health clinics, religious sanctuaries, police stations, retail stores and nutritional feeding centers – basically any type of structure contributing to a community’s ability to sustain itself and flourish. It is CGI’s design mission to deliver structures that are appropriately priced to meet demand at varying socio-economic levels. Structures are also designed to comply with local building codes and to withstand climate challenges, such as hurricane force winds, earthquakes and flooding. In addition, CGI’s design team delivers structures that respect local aesthetics and cultural sensitivities.

Most importantly, CGI is seeking to build on the lesson of “to a billion one,” – that is, to focus its efforts on changing the world one home at a time. Because in the realm of global affordable housing, when we ask ourselves the question, “Can we do this?” the answer must be “Yes!”